Hongqiao primed for innovation and growth 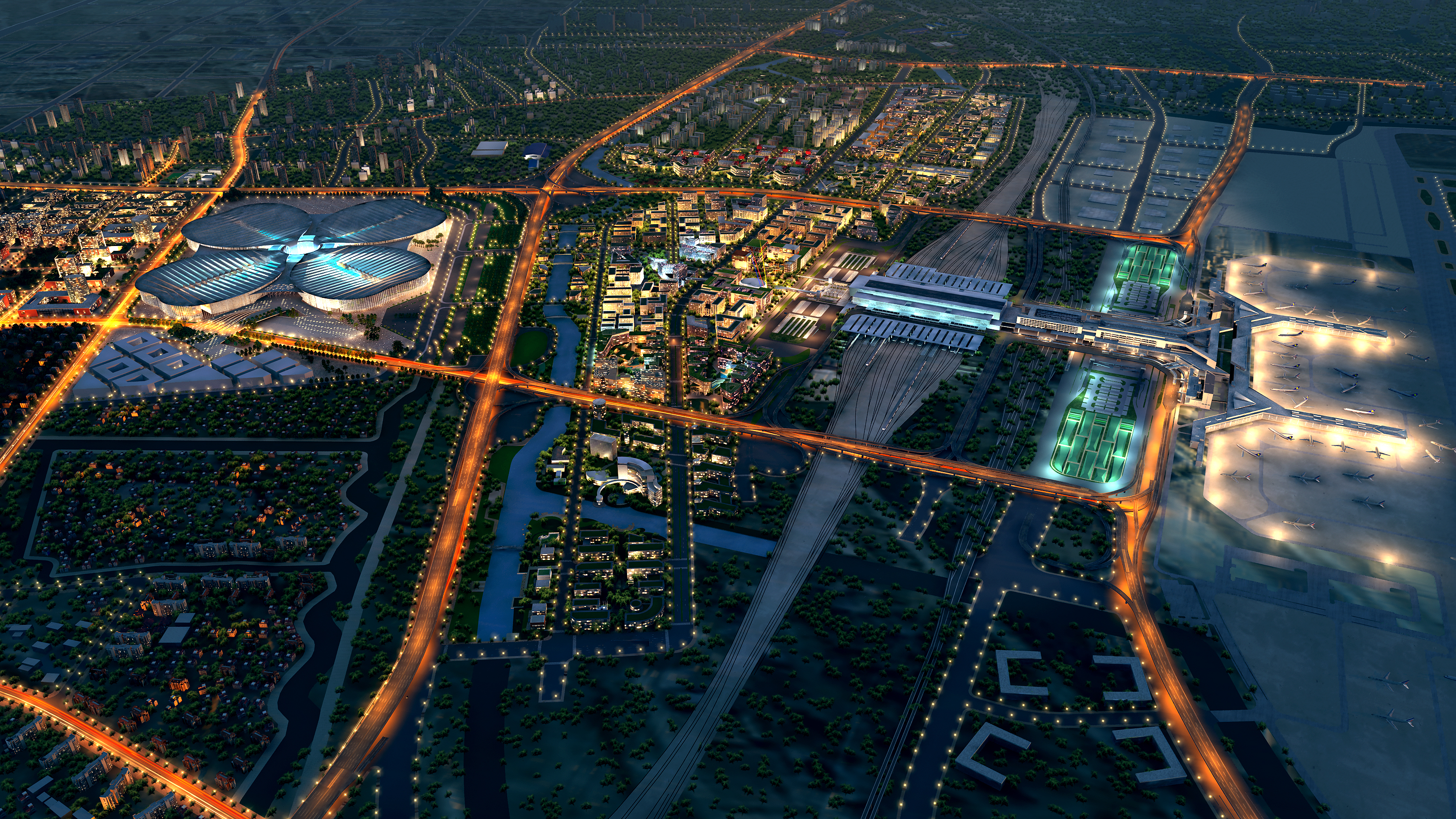 Since an overall development plan was approved by the State Council in February 2021, Shanghai's Hongqiao area has laid a great foundation for innovation and growth of key industries.

The Hongqiao International Hub for Opening-Up, with a functional layout of "one core, two belts" covering 7,000 square kilometers, saw its gross domestic product reach 2.58 trillion yuan (US$ 408.7 billion) in 2021, said Shanghai Vice Mayor Zong Ming, also director of the Hongqiao CBD administrative committee, at a meeting to commemorate the anniversary on Wednesday.

That means the hub, which is less than 2 percent of the entire Yangtze River Delta region, accounted for nearly 10 percent of the overall economic output in the region.

As the authorities noted, of the 104 key tasks assigned in the plan, 99 have been practically put into effect.

Covering a total of 151 square kilometers, the CBD posted tax revenue of 34.6 billion yuan in 2021, an increase of 29.1 percent year on year, 11.7 percentage points higher than the city's general growth.

Retail sales of social consumer goods in the CBD rose by 12.4 percent year on year, and the industrial output of enterprises above the "designated size" – those with an annual main business income of over 20 million yuan – jumped 16.6 percent from a year earlier. 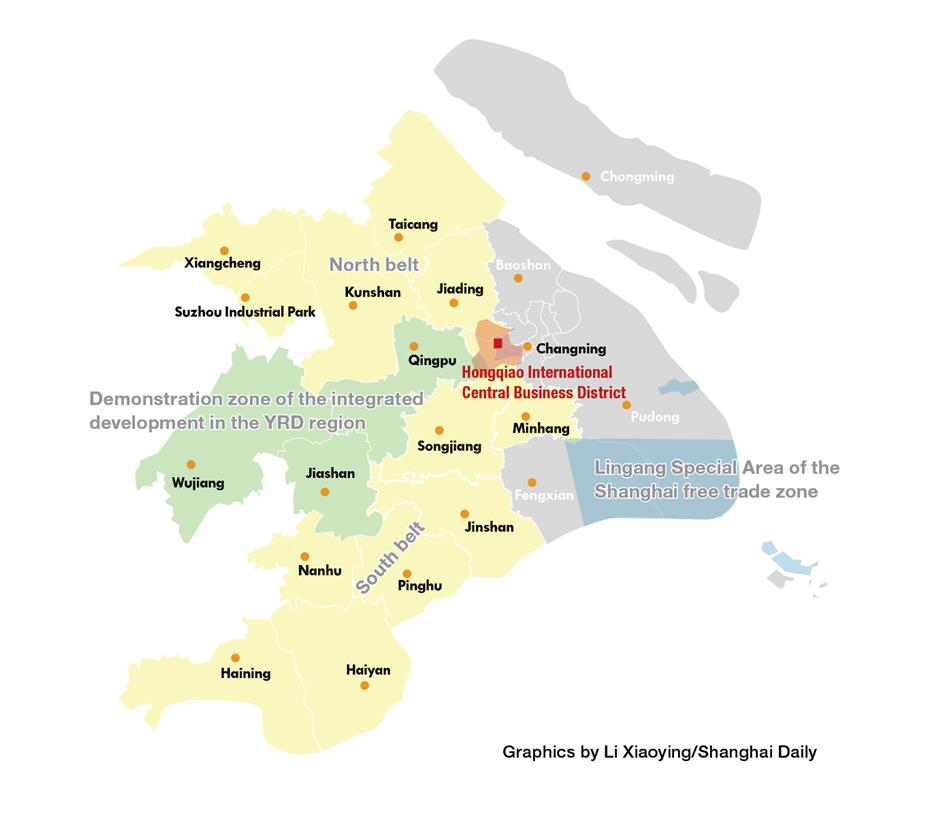 Newly setup in the district were regional headquarters of six multinational companies, accounting for 10.7 percent of added headquarters in the city last year.

The district also saw 13 new private enterprises' headquarters. In general, it has brought in over 400 headquarters of various enterprises cumulatively.

In addition, 102.8 million passengers passed through Hongqiao Railway Station, a surge of 28.6 percent.

While the Hongqiao International Airport posted passenger volume of 33.02 million last year, an average of 90,500 passengers per day, up 7.1 percent year on year.

These figures indicate the CBD's key functions of transportation, exhibitions and commerce are on an upswing.

Last September, the committee, along with authorities of the four districts that Hongqiao CBD is comprised of, namely Minhang, Jiading, Qingpu and Changning, signed 40 major projects with total investment exceeding 30.2 billion yuan.

On the same day, 20 major projects involving 29 billion yuan of investment were launched, and nine key functional platforms were unveiled.

These major projects were related to the emerging fields of the headquarters, innovation and digital economies, trade and high-end services, a CBD milestone in attracting new businesses, attracting major projects and promoting investment.

The hub also beefed up its core functions. Of the 29 key policies and measures stated in an overall plan for the area, 26 have been implemented so far. And it was underscored that 19 innovative measures taken during the China International Import Expo has been adopted as regular ones.

"And the other three policies will see further refinement and quicker adoption."

Focusing on key areas, these policies have laid a good foundation for innovation and development of booming sectors, including the new digital economy, fashion consumption, life science, smart cars and low-carbon new energy.

The development of digital economy in the commercial zone, for example, has focused on key areas such as the metaverse, e-sports, BeiDou Navigation Satellite System and the Internet, and has become home to more than 6,600 enterprises engaged in the digital economy, such as EcoPlants Tech, SuperGen Entertainment, CHC Navigation, Trip.com, iQiyi and iFlytek.

"Our company has grown rapidly after moving into the business district in May 2021, with more than 300 employees and tens of millions of yuan in revenue and orders to be signed – achieving a multi-fold increase compared with what we had before moving in," said Peng Cheng, founder and chief executive officer of EcoPlants Tech. "Relying on the talent, geography, market resources and policy advantages of Hongqiao International Open Hub, we will develop the future metaverse ecology here."

As for life science technology, focusing on the "Healthy China 2030" blueprint, the business district has strengthened the layout of science and technology innovation and high-end industry, and has attracted more than 2,800 enterprises, such as Roche, Neusoft, Cinda, Wego, ChiataiTianqing and Kindly Group.

Relying on two platforms – New Hongqiao International Medical Park and the Intelligent Medical Innovation Demonstration Base – the district will leverage the increasing number of high-end medical service headquarters, as well as innovative pharmaceutical and medical equipment enterprises, to build a biomedical headquarters cluster in the Yangtze River Delta.

Also, over 1,700 companies in the automotive industry chain are located in the district, including automobile design, research and development centers, auto parts manufacturers such as Bosch and Michelin, companies focusing on sales and services, driverless technology developers and new-energy vehicle businesses.

The district is also home to approximately 17,000 fashion commercial enterprises and over 1,100 companies working on low-carbon new energy. 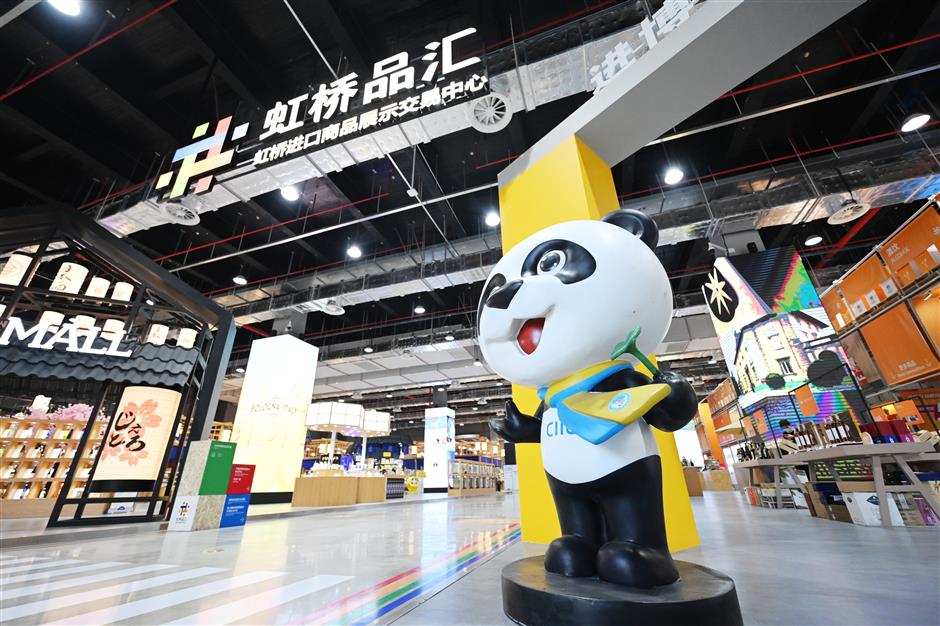 Another highlight in Hongqiao is platforms offering exhibition and trading services to support the CIIE, which are helping turn CIIE exhibits into commodities for sale and turn CIIE exhibitors to investors.

The first phase of Hongqiao Pinhui, part of the Hongqiao Import Commodity Exhibition and Trade Center, has attracted more than 60 trading companies. Panasonic, IGFD and other CIIE exhibitors have set up displays and trading spaces.

Among them, the Panasonic Living Experience Center, created after the third CIIE, is the company's first cross-divisional experience center and the only one focusing on CIIE exhibits, according to the company.

The Bonded Logistics Center (Type B), also part of the exhibition and trade center, is the closest bonded logistics center to the National Convention and Exhibition Center, CIIE's main venue, serving more than 30 trading companies.

In 2021, the bonded logistics center's imports and exports were 760 million yuan, ranking 11th nationally in terms of import volume per unit area.

As for other major platforms, the Greenland Global Community Trading Hub, a CIIE display and trade service platform, lured more than 180 exhibitors from 76 countries and regions, while the Overseas Trade Center of Hongqiao has introduced 88 enterprises with total registered capital of nearly 4.3 billion yuan.

"It is like a 'little United Nations,'" said Gao Xiang, director of the UK Shanghai Business Association, which is settled in the center and aims to help companies come in and also go out of China.