Unique learning and creative center for the traditional arts

“The program offered me time and space where I stopped to contemplate what I could do with my hands,” said Ma, who quit his job in Beijing.

“For the moment, I haven’t decided what to do next. But the methodology I have learned over the past year will prepare me for future challenges.”

Inaugurated in September last year, the PFSTA China Center, nestled in a heritage garden of Jiayuantang on Shiquan Road in Suzhou, is a major development and the first outreach class of the PFSTA in China. 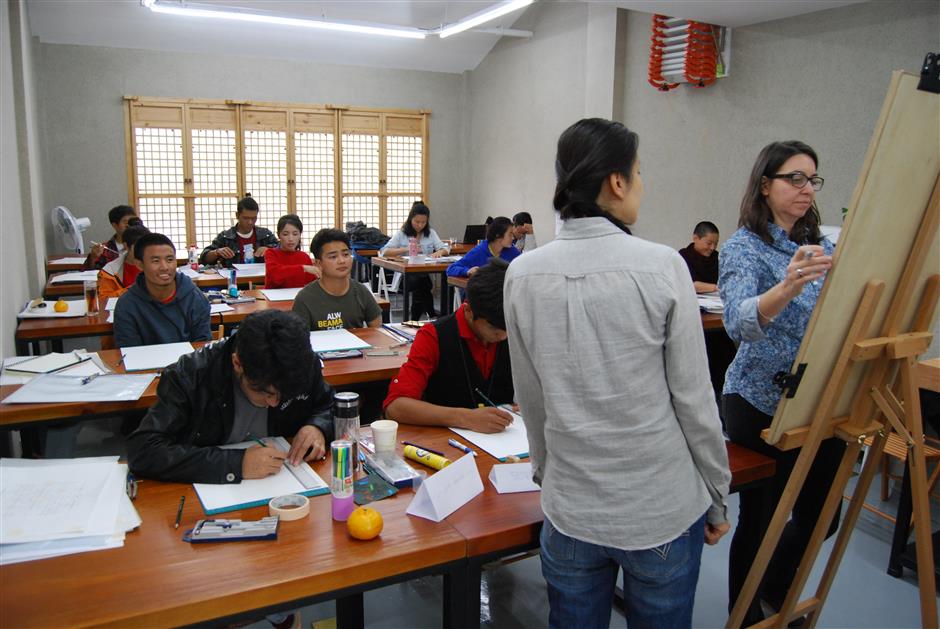 Delfina Bottesini (right) from the PFSTA teaches the first course “The Order of Nature: Geometry and Patterns” in the China Center of the Prince’s Foundation School of Traditional Arts in Suzhou.

The center’s full-time one-year program consists of individual modules taught by international masters in the fields of ceramic, geometry, painting, textile and wood. The curriculum is cross disciplinary and combines drawing, design and crafts taught through presentations, demonstrations as well as studio and workshop experience.

Alongside design and craft modules rooted within Western traditions, Chinese courses such as shanshui (landscape) painting, calligraphy and classic garden design are also included in the curriculum at the center.

Students learn how to engage with the universal principles of the language of traditional arts, and make them useful and relevant to their own contemporary practices.

Since its opening, the center has won full support from the Suzhou Intangible Cultural Heritages Preservation and Regulation Office.

Li Hong from the office, who attended the end-of-term show in June at the Jiayuantang showroom, said she was impressed by the paintings and craft works created by the full-time and part-time students of the center.

“Zaoyuan (Chinese garden design) has a long tradition in the arts education in Suzhou,” said Li. “By combining the PFTSA methodology with the local and historical experience of Suzhou, we can more effectively apply the broader wisdom of humanity to achieve harmony between art and nature.”

Azzam, director of the PFTSA, said on the occasion of the center’s first graduation ceremony in Suzhou that an important objective of the school’s work is to encourage young people to understand the value of their own cultural heritage. The classes are open to professionals and art lovers of all ages and backgrounds.

The PFSTA was founded in 2005 by the Prince of Wales as part of The Prince’s Charities group, with the aim “to continue the living traditions of the world’s sacred and traditional art forms.”

Chang, board director of the China Center, emphasized the reinvigoration of traditional culture in his speech.

“The real challenge is that craftsmen don’t know the significance of their work anymore,” Chang said. “This is the support we can actually give them.”

From October 22 to November 2, 2018, Delfina Bottesini from the PFSTA taught “The Order of Nature: Geometry and Patterns.”

“It is not a subject that is taught very much in China, maybe geometry is seen as a Western tradition,” Bottesini said.

“But it isn’t. It’s very much a universal tradition.”

She believes the lotus contains the essential elements of geometry — the point, line and circle. 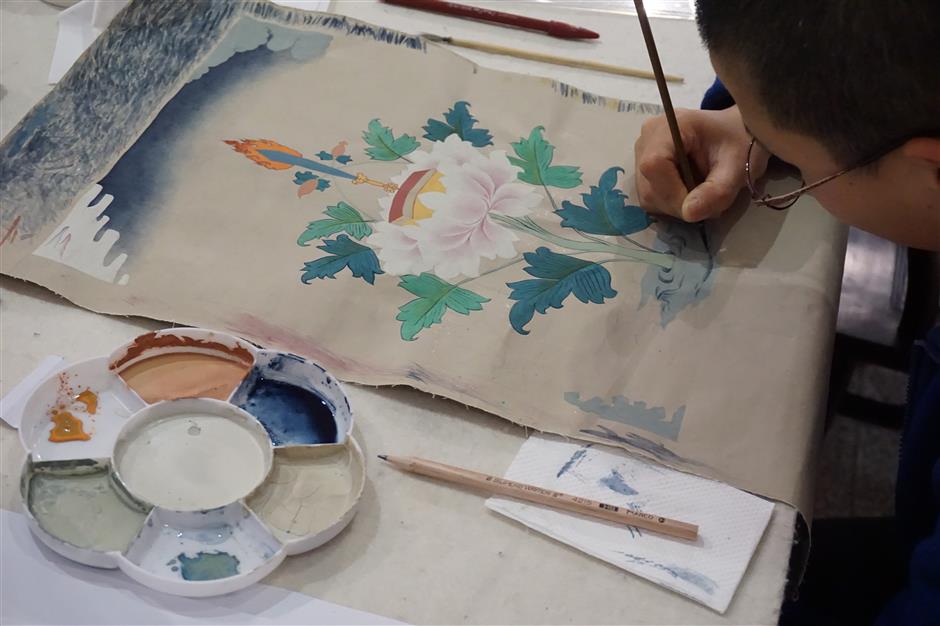 Students practice Thangka painting in the course of “Cosmic Body: Principals of the Buddhist Figure.”

Student Wang Xifang said: “I found the geometry course much more interesting than I had expected. It combines concepts related to the cosmos, celestial bodies, the human world and a myraid of other things. At the same time, learning to draw the patterns by hand also stimulated my creativity.”

Hu Longzhang is a thangka practitioner based in Shanghai. He came to the class of “Alchemy of Color: Methods and Materials” taught by David Cranswick in November.

He learned a different experience of the working methods of master painters of the Renaissance.

“All traditional painters would use materials that were available in their daily reality,” said Hu.

“Through Renaissance oil painting tradition, I learned a different way of blending paint layers which is more of a Tibetan tradition than the traditional Chinese wet-on-wet techniques.”

Both Chang and Azzam were glad to hear feedback from students.

“As we make these things, that tradition with which we are engaging practically will speak back to us and we will be able to understand and really align with it. That in turn expands intellectual understanding.”