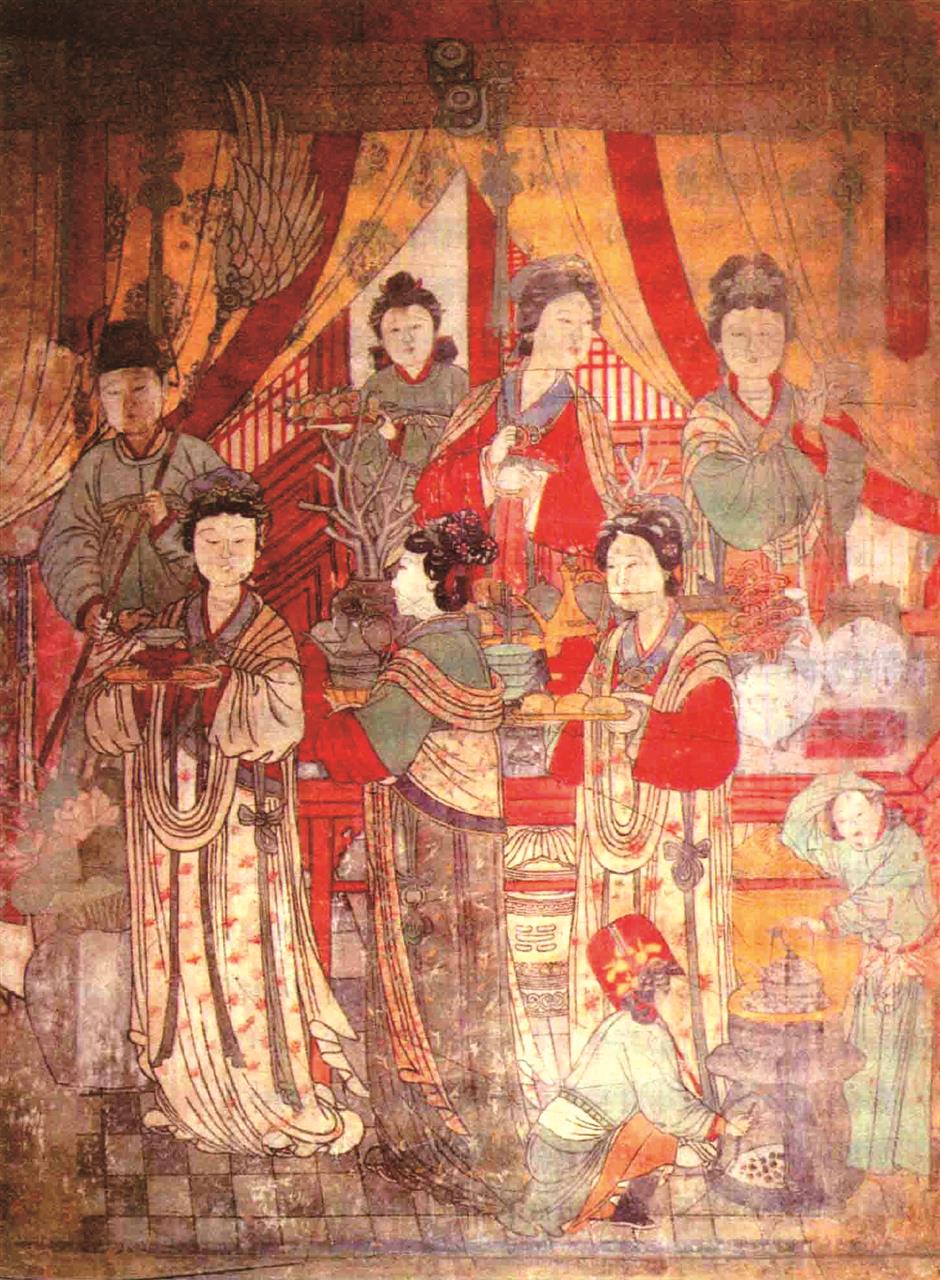 Apart from the Water God, Zhao Cheng also created two daily life paintings on the eastern wall of the Guangsheng Temple in Hongdong County, Shanxi Province, one depicting court ladies dressing themselves up in the garden.

“It turns out that the Chinese have played golf since the Yuan Dynasty (1271-1368),” said Juan Antonio Samaranch, former president of the International Olympic Committee, after viewing a Chinese mural of the time during his visit to China.

The mural features an ancient Chinese game called chuiwan, of which the rules resemble modern golf. It thrived in the Song (960-1279) and the Yuan dynasties. A book called “Wan Jing,” or “Ball Treatise of the Yuan Dynasty,” describes the rules, techniques, etiquette and equipment of the sport.

Like golf, players use a restricted number of clubs, and holes, which are marked by flags of different colors and spread about on terrains of varying difficulties.

The chuiwan balls were made out of the burls from a tree trunk. There were various types of chuiwan clubs for different uses, including a cuan club, pu club and shao club.

The grips were made of bamboo and the heads were mainly made from trees, which were cut down in the autumn and winter, although the making of clubs needed to be done on sunny days in spring or summer.

The chuiwan mural features four people. Dressed in red robes, two of them, who hold chuiwan clubs and squat beside balls, are pondering how to hit them into the hole in one stroke.

Another two people, who are probably attendants, stand aside. One of them points at the hole in order to make his master notice it.

The painting is just a small part of a set of huge fresco pieces, which cover the walls of a temple called Shuishen, or Water God. It is one of the four parts of an architectural complex named Guangsheng Temple in Hongdong County, Shanxi Province.

Located at the southern foot of Huoshan Mountain, Guangsheng Temple was first constructed in AD 147 and rebuilt in 1305 due to an earthquake.

In the southeast of Guangsheng Temple, there is a limpid pool. The water sourced from a mountain spring has been used to irrigate land since the Tang Dynasty (AD 618-907). Locals regard it as their “Mother Spring.”

The annual ritual is held in the Shuishen Temple on the 18th day of the third lunar month to celebrate the anniversary of the Water God’s birth.

During the reign of Emperor Renzong of Yuan (1285-1320), a pilgrim told the abbot of Shuishen Temple that he thought the place was lifeless and suggested it should be decorated.

Taking his advice, the abbot invited two painters, Zhao Cheng and Hong Dong, to paint on the eastern wall and western wall respectively. Both of the murals are 11 meters wide and 5.3 meters tall.

In Hong’s mural, the Water God is surrounded by civil and military officials, armed guards and court ladies holding fans. In the lower part of his mural an official, who holds a memorial, is begging the god for rain.

The right part of Hong’s work features maids who sort out the god’s treasures. A rectangular vessel, containing ice and fruit, is hidden under a table.

The chuiwan mural is painted by Hong along with a go mural, which depicts two players concentrating on the stones while spectators and attendants watch the game silently.

Copies of the two murals are currently on display at China Sports Museum in Beijing.

Zhao’s Water God, whose face is darker than that on Hong’s mural, is surrounded by many officials and deities like the Thunder God, Lightning Goddess, Wind God and Rain God.

Zhao also created two daily life paintings. One of them features five officials who buy fish from a vendor. An official uses a steelyard to weigh three fishes by himself. Opening his mouth, the vendor has one hand holding another two fishes and the other signaling number two, which seems to promote the remaining fish.

Another of Zhao’s daily life painting depicts court ladies dressing themselves up in the garden.

Since the main theme of the murals is about the Water God, why are there so many daily life paintings and which are irrelevant?

Some experts explain the question through linguistics. In Chinese, the word for “ball,” which appears in the chuiwan painting, is homonymic with that of “beg.” Meanwhile, the words for “go” and “fish” are homophones of the Chinese characters meaning “pray” and “rain” respectively.

On the southern wall hangs a mural featuring 11 figures who perform zaju, which is one of the major forms of Chinese drama. It is the earliest of its kind that has been found so far.

The banner painted on the top of the mural shows a female artist named Zhong Duxiu, who is the star of the performance.

Other figures serve as actors, musicians and backstage staff. The mural is 3 meters wide and 5.3 meters tall.