Exhibition of ancient city ahead of its time

Ancient artifacts from the Tang Dynasty (AD 618-907) are on show at the Zhejiang University Museum of Art and Archeology through April 20, 2021.

Chang’an, now Xi’an in Shaanxi Province, was capital of the Tang Dynasty and considered the largest and most prosperous city at the time.

The city’s layout, buildings and facilities were far ahead of their time and had a major influence on other countries. Besides its booming economy, Chang’an was also a center for Buddhism.

The exhibition features the residents’ clothes, vessels, food, entertainment activities and daily travel, gaining an insight into the city life at the time.

Visitors will find ceramic figurines with vivid expressions and plus-size bodies. As chubbiness was in favor over slimness in the Tang Dynasty, the exhibits feature plump faces.

Visitors observe ceramic figurines with vivid expressions and plus-size bodies created in the Tang Dynasty (AD 618-907) at the Zhejiang University Museum of Art and Archeology. The exhibition will last through April 20.

The exhibits also reveal that people living in that time preferred an ornate style of clothing. One item on display is embroidered with auspicious bird patterns and decorated with pearls.

However, Tang Dynasty clothes were divided into different levels according to a rigid hierarchy. The exhibition shows how some patterns and accessories were exclusive to royal and noble families.

Ancient Chang’an had thousands of craftspeople. Artists who supplied products to noble families flocked to the city, and streets were dotted with shops that sold a myriad of daily utensils, especially vessels for tea.

The trend of drinking tea swept the Tang Dynasty thanks to Lu Yu’s book “The Classic of Tea.” Respected as China’s “Sage of Tea,” Lu made great contributions to cultivating, making and drinking tea.

On the other hand, merchants from other cities brought their local products to Chang’an, which in return made Chang’an the hub of commercial trade.

A gold mirror on display is shaped like a sunflower and engraved with grape vines, reflecting the superb skills of craftspeople through its smooth lines and sophisticated patterns. 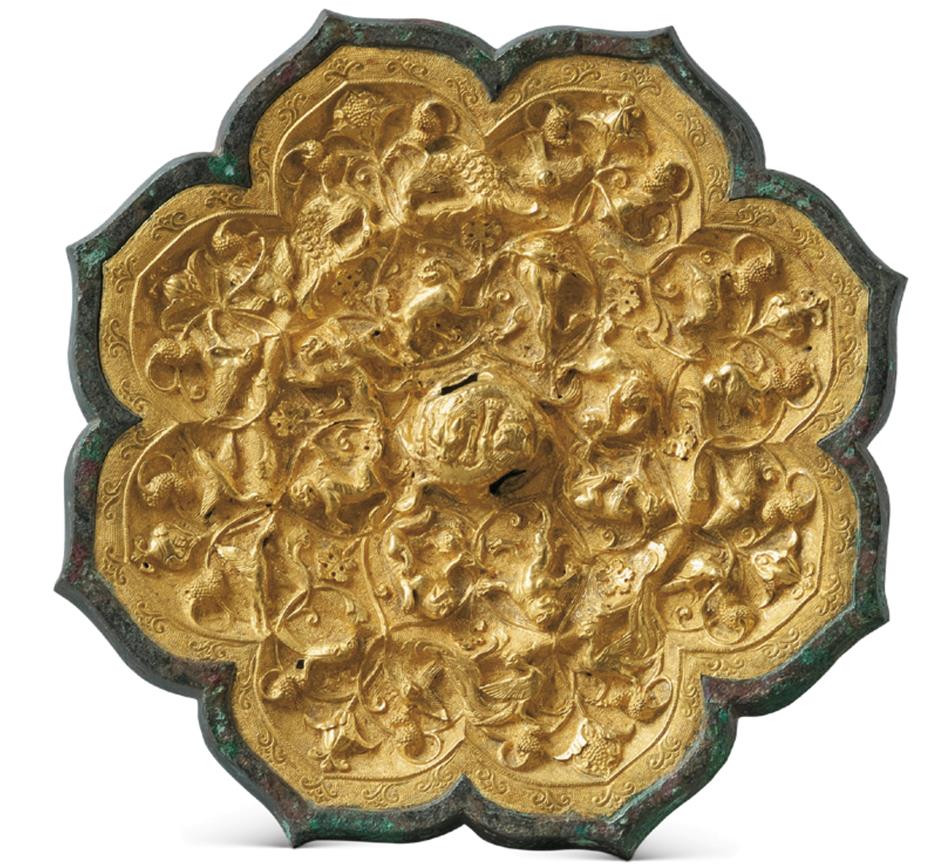 A gold mirror on display is shaped like a sunflower and engraved with grape vines, reflecting the superb skills of craftspeople through its smooth lines and sophisticated patterns.

Copper and gold were made into mirrors for daily use during the period. Mirrors with auspicious lines and mythical creatures were also used as objects to ward off evil.

The exhibition has a set of silver containers decorated with figures and floral motifs. They are believed to have been used for worshipping Buddha. 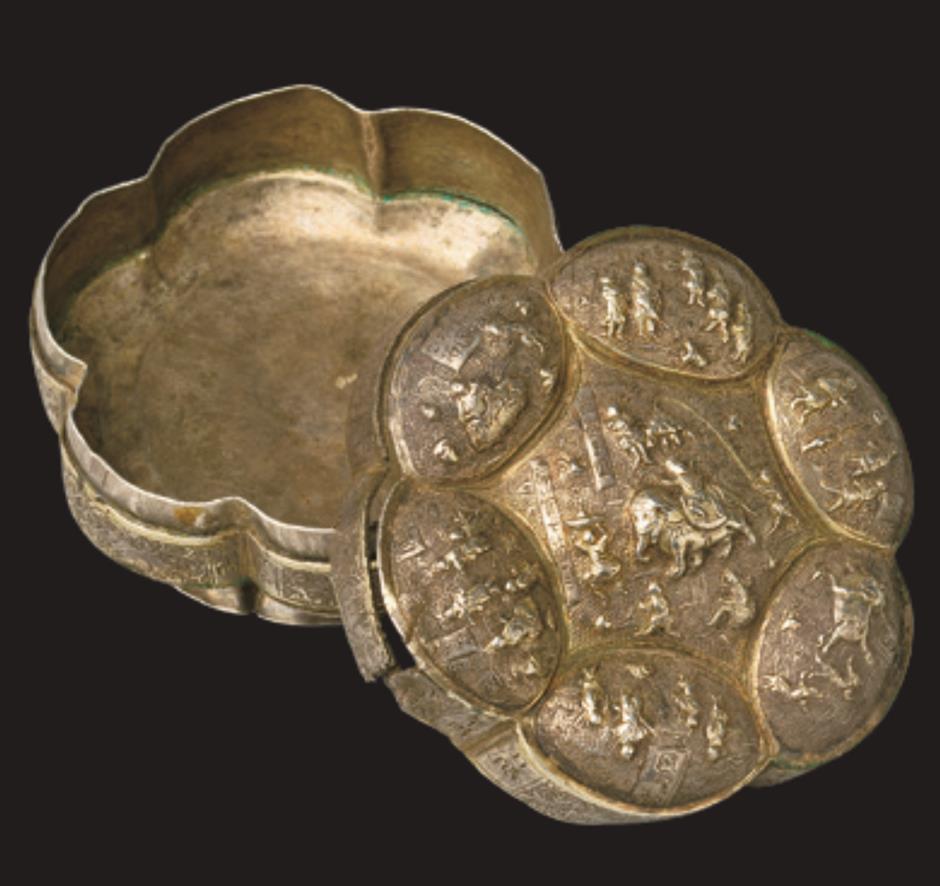 A silver container decorated with figures and floral motifs is on display. It is believed to have been used for worshipping Buddha.

During the Tang Dynasty, Emperor Taizong (AD 598-649) sent the monk Xuanzang to Tianzhu (present-day India) to inquire about the teachings of Buddha. Hundreds of Buddhist scriptures were sent back to China, which largely contributed to the development of the religion and cultural exchanges.

Buddhism subsequently evolved into the dynasty’s main religion with millions of devout believers worshipping Buddha and building temples across China, especially in Chang’an.

Buddhism became part of Chinese culture and the epitome of the Tang Dynasty, deeply influencing a wide variety of fields, including art, architecture, medicine, philosophy and literature.

Buddhist scriptures on show testify to the city’s vibrant Buddhist culture. The Chinese manuscript of Mahaprajna Paramita Sutra, which was discovered in a royal temple in Japan, proved Tang’s deep influence on other countries.

In the exhibition, tri-colored glazed pottery horses excavated in ancient Chang’an have obvious Western features, proving their exchanges along the Silk Road which linked civilizations in trade, religion, technology, culture and arts. 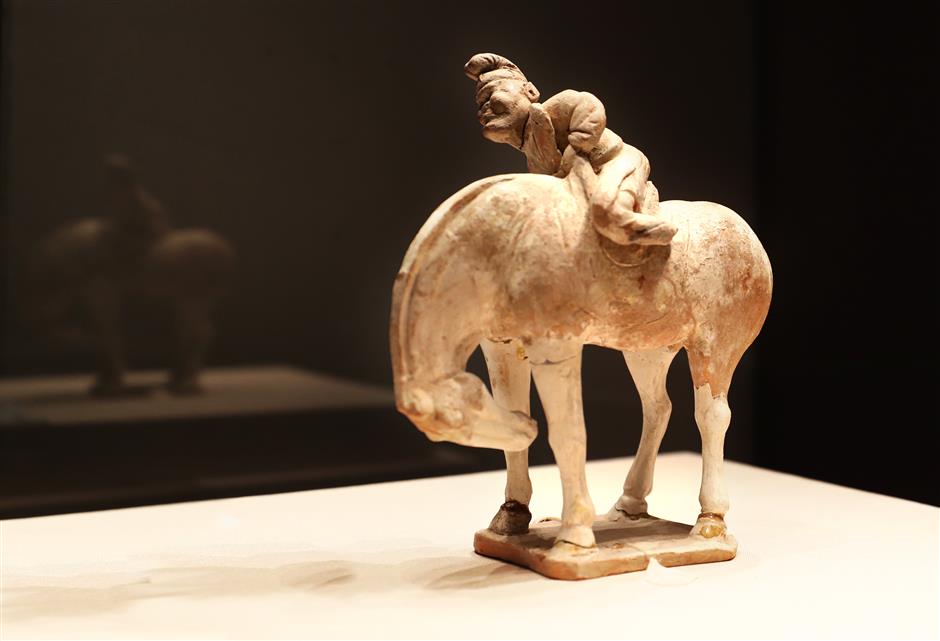 Launched last year at the Zijingang Campus of Zhejiang University, the 25,000-square-meter museum has a library in addition to its exhibition and education spaces.

The museum is expected to become an archeology center for students in Zhejiang University and offer cultural education to the public.

﻿
Special Reports
ADVERTISEMENT
61761
,
Exhibition of ancient city ahead of its time
'Holiday' in Indonesia thanks to photo exhibition
New opera house hits a high note for enhanced city culture
Reinvention of Huju Opera amid COVID-19 pandemic
Chinese opera characters come to life in new exhibit
Capturing the sonic, sultry and serene sounds of Suzhou
A journey through the ages of video games
Charting the evolution of Chinese fashion over the past century
Capturing the elegance of West Lake over the centuries
Remembering an artist who donated 'his best work' to Shanghai
EXPLORE SHINE