Art as a group activity with common folks

Using smooth black lines, Ni Weihua brushes on old walls, weathered rocks and corroded wooden boards. The Shanghai-native contemporary artist and photographer, 59, is trying to give new life to debris with his outdoor performance project "The Tracing," which has been ongoing for three years across China.

It is not graffiti, to be precise, because it does not create any new patterns. The artist simply follows, highlights and colors both natural and man-made traces on the walls – cracks, holes, rough edges, peel-offs, remnants of anonymous confessions or messy doodles. He underlines these traces, once forgotten or ignored in the social public space, and turns them into art as new visual landscapes.

He doesn't paint alone. As the drawing skills are easy and fast to learn, everyone is welcome to this shared, open-air platform. Since 2018, hundreds of people have joined the project from all walks of life – local residents, farmers, cleaners, artists and scholars, but also often overlooked groups, such as the unemployed, disabled and those with mental diseases.

"Everyone can be an artist, and everyone has the right to take part in an art practice," Ni said. "It's my exploration and experiment on the relationship between people and public space, art realm and social life." 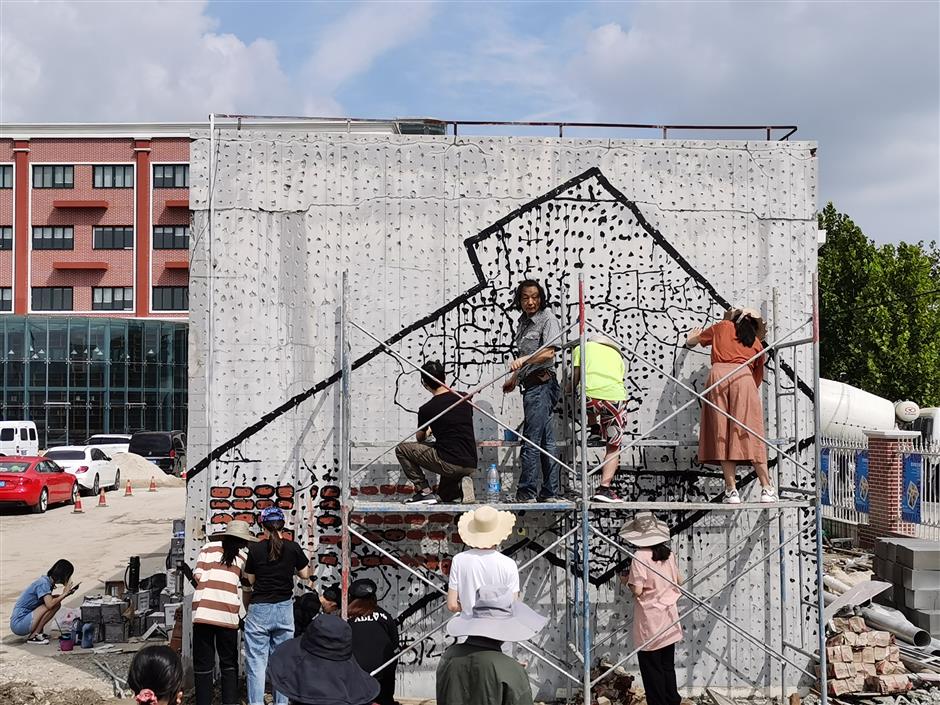 Over the years, he has painted on the cracked walls of old factories, remote villages and abandoned buildings.

Highly inclusive and interactive, Ni's practice breaks the art boundary, and builds a bridge for the public to get to know contemporary art.

Traces on the dilapidated brick-laid wall in Hengdu Town, Zhejiang Province, was his most recent project, which attracted more than 50 villagers to join, including an 89-year-old grandmother. For the locals, ancient houses and walls are a common and often neglected sight. But with paintbrushes in hand, they touched and scrutinized the old wall for the first time with memories of the past flashing back.

"It brought them back to childhood, when they could doodle and live in a carefree way without the adult world's disciplines. It was the healing power of art," Ni said.

As all the works Ni has created will be torn down, it leads to another philosophical topic on permanence – there is no permanence in the world.

"Everything is temporary, and all the traces will disappear. I'm not going to keep them forever," he said.

He once witnessed a wall he had just painted being destroyed by a bulldozer.

"It was the final completion of my work, to some extent," he said.

Another day, while he was painting a wall on Pangu Road in Baoshan District, a construction worker came up to him and said, "It's okay for you to paint here, but I'm going to black it out with cement soon." The following morning, Ni went back, only to find an empty wall, like the traces had never existed before.

"But I know it's there, just covered and stored under the cement layer," he said.

Traces can be left not only on walls. In May, Ni began to trace human faces by highlighting the wrinkles, frowns and flecks in black ink. It's probably an anti-beauty manifesto on today's culture, where everyone is trying to cover up the flaws, either innate or those that come with age, with makeup.

Apparently, Ni goes against this aesthetic and offers a new perspective for people to recognize and accept themselves by underlining the blemishes deepened by the traces of time.

The veteran artist has stood at the forefront of the Chinese art world over the past three decades with an experimental spirit and critical consciousness. 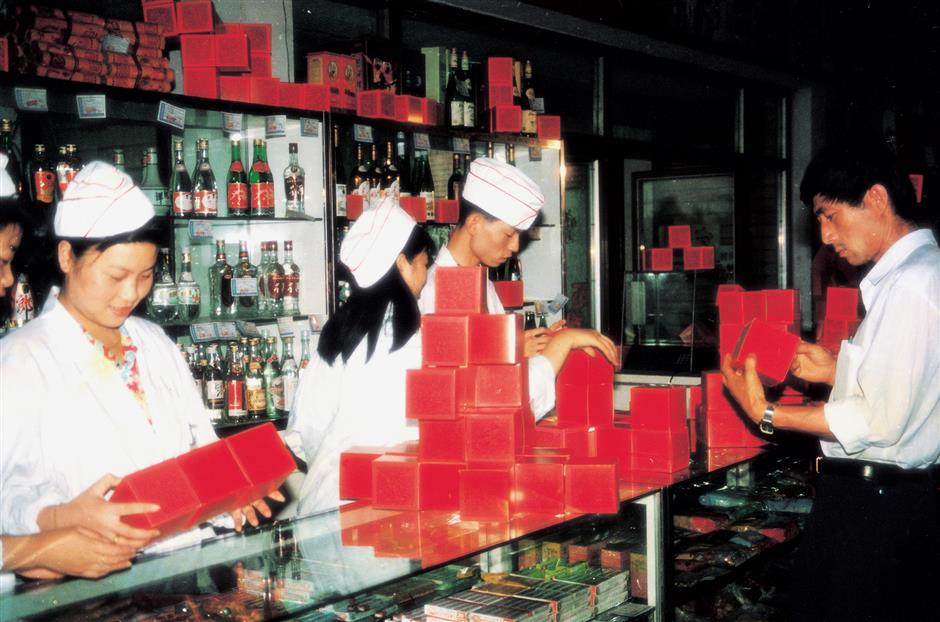 People play with the red gift-size boxes at a store during Ni's performance art series "Continuously Spreading Event: Red Boxes and Posters" in 1992.

He first rose to fame in the early 1990s with his large-scale performance art series "Continuously Spreading Event: Red Boxes and Posters," casting his witty comment on the digital-industrialized modern society that China was becoming.

Among the country's first people to have access to computers in the early 1990s, he was inspired by the system crash that produced computer gibberish resulting from only a bug.

In 1992, Ni made thousands of small red paper boxes like gift packages printed with various garbled messages from a computer failure, and piled them on car roofs, storage racks and street corners, as if they were spreading and growing like red organic crystals, moss and viruses.

He even distributed the red gift-size boxes to people at the stock market and downtown parks, which they were happy to receive, thinking they were free gifts – a metaphor for consumer culture. He might be China's first artist who in a very real sense has interacted with the public.

"It was about 30 years ago, but it's the same case today," he said. "We thought we could play safe with the best risk management, but it turns out to be a global breakdown when we face real disasters, which might be caused by a tiny error."

His work titled "Fine Arts," two large copper Chinese characters 4 meters tall and 8 meters wide, was once showcased at the front gate of the Liu Haisu Art Museum in Shanghai, becoming a milestone in the Chinese contemporary art world. It featured innovative elements and experimented with new ways of making art.

After 1998, the artist picked up a camera and focused his lens on public areas in the form of videos, documenting the city's urbanization and transformation through the "Keywords" and "Landscape Walls" series. 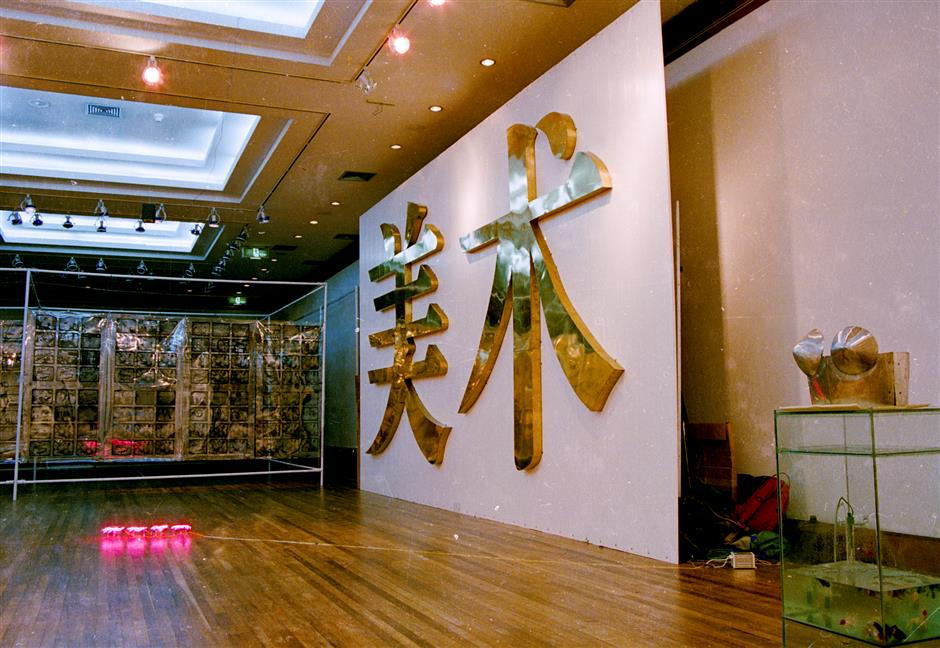 Ni has been dedicating himself to "The Tracing" project. In 2019, the project was introduced to Bologna, Italy. Although he didn't take part, the event went smoothly and was joined by local engineers, artists, community staff members and overseas students. They brushed the traces of remnants of old graffiti on a wall, layer after layer, stroke by stroke.

"It was a shared art piece done by people of different nationalities, skin colors and religions, probably suggesting cultural clashes and collaboration," he said.

Currently Ni is working on a global tracing event where people from Shanghai, Guangzhou, Berlin, London, Vancouver and Brussels will "trace" on the same day. From old walls and natural rocks to human faces, there will be infinite possibilities.

"In the future, drones, robots with AI technology and animals can also join the project," he said.