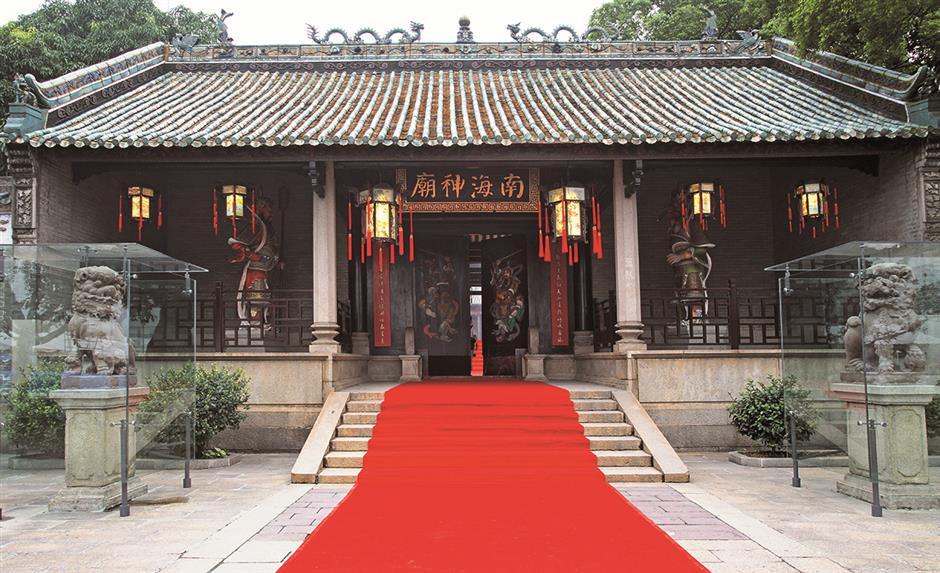 Sitting on a central axis running south to north, the compound was designed with five halls and courtyards. The Great Hall is the shrine for the omnipotent South Sea God Zhu Rong, also known as the God of Fire. As he fulfilled his duties diligently in Heaven, Zhu was assigned by the Jade Emperor in Chinese mythology to rule Hengshan Mountain in the south and the South Sea.

The legend goes that Zhu arrived at the Yue region (Guangdong) and chose the temple as his office building, where he was in full charge of the region's tides, thunder, lightning, wind and sea waves. Given his terrifying power, Zhu was worshipped by the local fishermen and seaborne businessmen as an almighty god who could protect and bless them with a peaceful sea surface.

In front of the temple, ancient people set up a memorial archway inscribed with four Chinese characters meaning "A Sea without Waves" to express their simple wish for a safe journey.

It was made of wood before the Ming Dynasty (1368-1644), but was later renovated to stone. With four pillars, the archway features an unsophisticated yet powerful style of the Qing Dynasty (1644-1911).

Although there are more than 30 similar archways in the Pearl River Delta, Hong Kong and Macau, South Sea God Temple's was the first.

The temple has another more popular name – "Boluo" – in memory of diplomatic envoy Daxi from Boluo (ancient India). He arrived at Fuxu Harbor, landed in the city of Guangzhou and paid homage to the South Sea God in the temple. Obsessed with the beautiful city scenes, he forgot the boarding time and missed the boat back to his country.

Daxi stood at the harbor every day, looking into the distance with tears in his eyes and waiting for the boat from Boluo. He planted two small trees in the temple to carry the memories of his homeland. The boat never came back, and he died in the temple.

Moved by the Indian's deep love for his country, local people set up a statue of him wearing a traditional Chinese robe and hat, with his left hand near his eyes to shield them from the sun. The two small trees have grown into towering giants, known today as jackfruit trees that can be seen everywhere in Guangzhou.

At the temple's southwestern corner on Zhangqiu Hill, Yuri (Sunbathing) Pavilion, surrounded by water on three sides, is the best site to observe the sunrise. It was built during the Tang Dynasty (AD 618-907), and was reconstructed in the Qing Dynasty.

The Pavilion of Etiquette, a place to put articles of tribute and worship, once housed China's third largest bronze drum from the Eastern Han Dynasty (AD 25-220). It featured intricate carvings, and six vividly engraved frogs showed the skillful casting techniques of 2,000 years ago. However, the drum was stolen in 2000.

The temple has a rich collection of stone inscriptions. In the mid-1980s, the Guangzhou Cultural Relics Committee conducted a thorough examination, research and renovation project for the temple's stone tombs and steles. By 2005, there were a total of 45 stone steles carved during various dynasties.

The stele from the Tang Dynasty erected on the eastern part of the front gate is the most precious one. The inscriptions say that Emperor Xuanzong (AD 684-762) canonized the South Sea God as Guangli King, and the Guangzhou Governor Kong Kui paid three official visits to worship the God from AD 818 to 820. The tablet was written by the great poet Han Yu (AD 768-824) and inscribed by the skillful sculptor Li Shuqi.

The stone tablet from the Ming Dynasty was set up in 1370, which recorded that all of the previous royal titles were canceled and the god was simply canonized as "South Sea God."

The tablet was giant, which aligned with the dynasty's aesthetics of grandeur. It was carried by Bixi, a huge turtle-like animal. In Chinese mythology, Bixi was one of Dragon King's nine sons, who liked to bear heavy burdens. The animal can be seen on many ancient stone steles.