Countless Chinese cultural relics were plundered by foreign invaders during wars. To recover them, a commission was established in 1945 after the victory of the War of Resistance against Japanese Aggression (1931-45). Thanks to the commission, an array of precious bronze wares were rescued, including a bronze jar from the Warring States Period (475-221 BC).

Wang Shixiang, who later became an antique collector and a connoisseur, joined the commission in September 1945 after he graduated from Yenching University in Beijing. Recommended by Ma Heng, the former director of the Palace Museum in Beijing, and Liang Sicheng, known as the father of modern Chinese architecture, Wang served as an assistant representative of today's Beijing and Tianjin areas.

In order to learn about the whereabouts of the lost artifacts, Wang visited many antique collectors. After making some inquiries, Wang discovered that almost all the prominent bronze wares unearthed in places like Henan Province during wars were purchased by a German whose Chinese name was Yang Ningshi.

Wang rushed to Yang's secret warehouse in Tianjin but was apprehended by police, as Yang reported that his collection had been stolen. After being released, Wang returned to Beijing and rushed to Siemssen & Co, a pioneering German shipping and trading firm where Yang worked as the manager.

When Wang arrived at Yang's office without prior notice, a foreign secretary was compiling a catalogue of his collection.

Wang then returned to Tianjin to address inquiries to Yang, who responded that the collection has been stolen by the Kuomintang troops. He checked with army commander Mou Tingfang who denied the theft.

It turned out that Yang lied in order to cover up the fact that he illegally acquired these cultural relics. After a search, Wang found around 240 bronze wares on a merchant ship, including a bronze jar portraying the scenes of feasting, fishing, hunting and fighting. 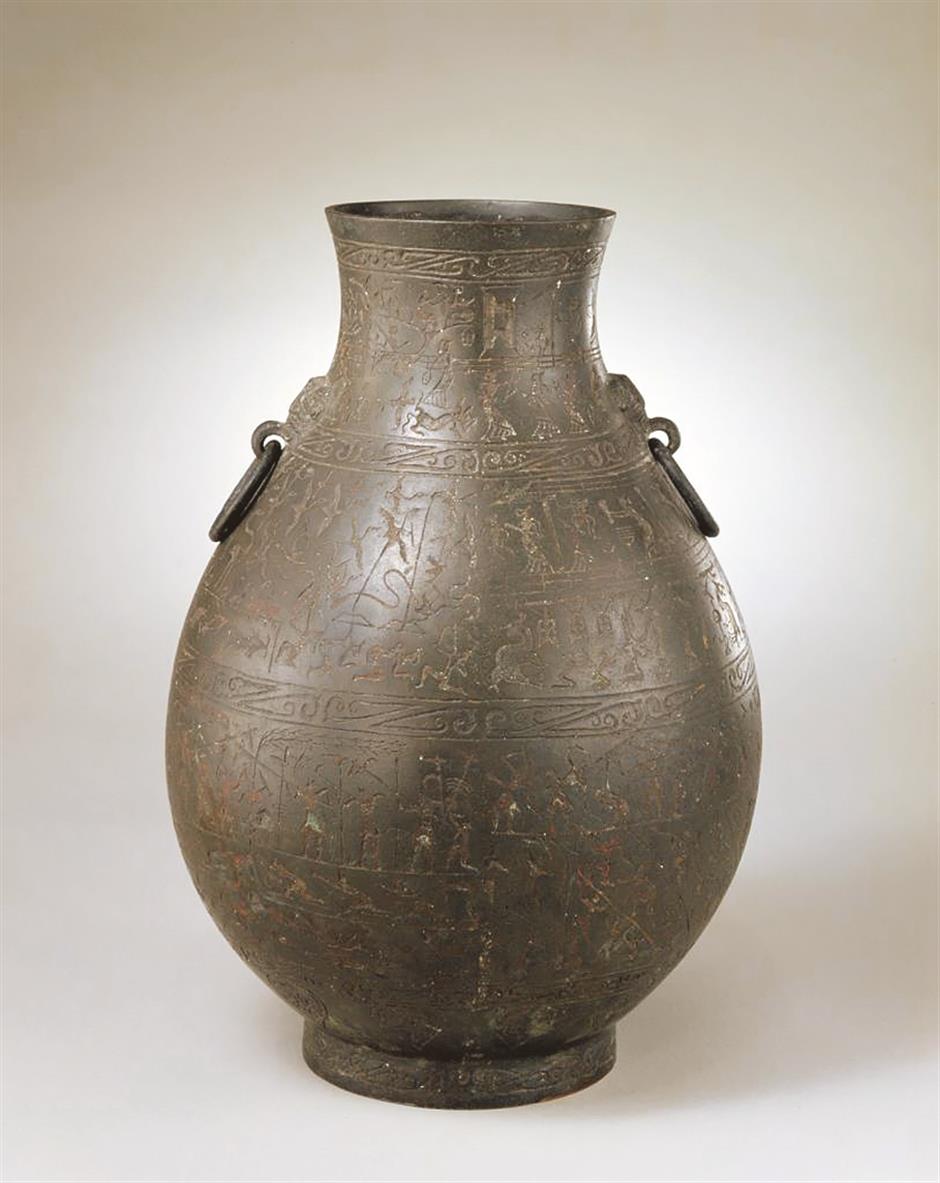 Courtesy of the Palace Museum

The bronze jar cast in the Warring States Period (475-221 BC) portrays the scenes of feasting, fishing, hunting and fighting.

Cast in the Warring States Period, the bronze jar measures 31.6 centimeters in height. Its mouth and belly are 10.9cm and 21.5cm in diameter respectively.

On the shoulder of the bronze jar are two ring-shaped handles hanging down from the heads of a mythical creature. The entire body of the bronze jar is adorned with various motifs. Featuring five bands patterned with clouds, the artifact can be divided into four parts.

The first part is on its neck, which mainly portrays picking mulberry leaves on its left side and shooting arrows on its right.

A group of women are picking and carrying mulberry leaves to feed silkworms. It is believed the image symbolizes the ritual of imperial concubines worshiping the God of Silkworms.

Meanwhile, several men, each holding a bow, are having an archery contest, representing the ritualistic practice of archery in ancient China. 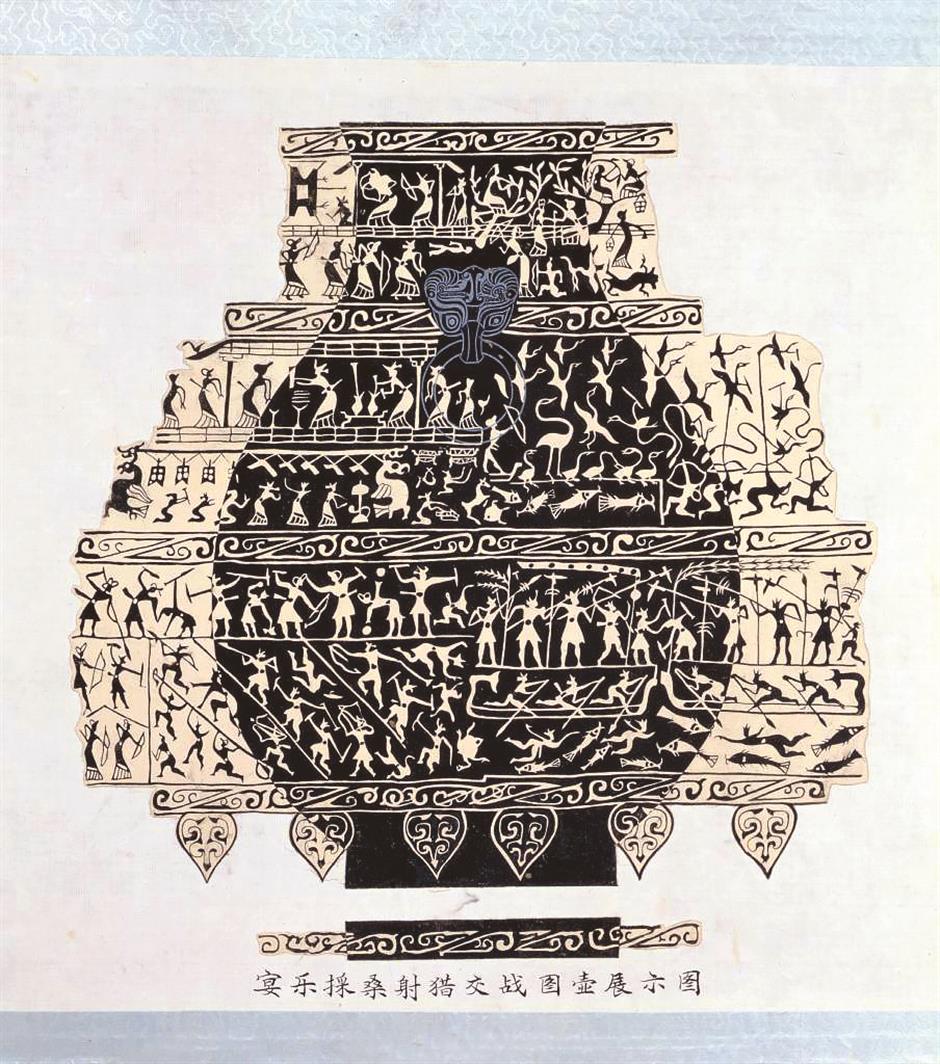 Courtesy of the Palace Museum

The rubbing image showcases the motifs adorning the bronze jar, which can be divided into four parts.

The second part is on the upper part of the vessel's midsection, which features two images – feasting on the left side and hunting on the right.

The feasting scene can be further divided into two parts. One depicts seven people drinking in a pavilion while two servants cook food. The other portrays people playing ancient Chinese musical instruments. From left to right, three musicians are playing the bianzhong, or bronze bells, and the other three are striking the qing, or stone chime, blowing the horn-shaped instrument and playing a drum.

The third part is located on the lower part of the jar's midsection and is the highlight, depicting a battle on land and water.

Attackers are about to invade a city by using ladders, while defenders clasping arms are ready to fight. Two ships with different banners move forward and come face to face. Warriors on both sides hold weapons with long handles, which are more aggressive in the water war. In order to boost morale, a person at the stern of the right ship is drumming. Along with fish, warriors can be seen swimming in the river.

The fourth part is on the bronze jar's ring foot. The motif of leaves adds an elegant tone.

With superb casting and imaginative design, the ritual bronze jar represents a defining masterpiece, not only of Chinese art but also within the context of global art history. It is currently displayed at the Palace Museum.