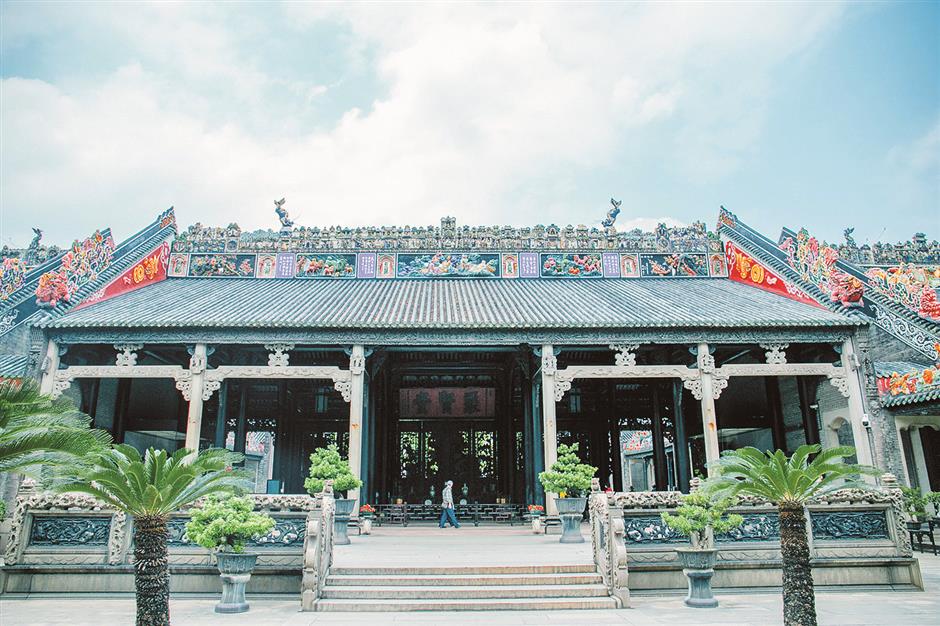 As the most common surname in southern China, people surnamed Chen can find their origins in Chen's Lineage Hall in Guangzhou, Guangdong Province.

As the most common surname in southern China, people surnamed Chen can find their origins in Chen's Lineage Hall in Guangzhou, Guangdong Province.

Built in 1894 and financed by the Chen clan from all parts of the province, the complex once served as a stopover accommodation point for family members, who trekked to the capital to take the imperial examinations, receive official posts in other provinces, handle litigation and pay taxes.

Covering an area of 15,000 square meters, the complex is China's largest, best-preserved and considered the most beautiful ancestral hall in Guangdong Province.

It is known as the pearl on the crown of south China architecture.

It has nine halls and six courtyards sitting on three axial lines.

The two giant stone drums at the entrance were set up by Chen Botao to flaunt the third place he got in the imperial examinations.

The board on the front door reads "Chen's Family Academy." The 4-meter-high front doors were painted with two fierce-looking gods, Yuchi Gong and Qin Qiong, both distinguished generals who lived in the early Tang Dynasty (AD 618-907).

Past the door, there are six huge brick carving works pieced together, each 4 meters long.

Each gray brick, polished fine and smooth in the province's city of Dongguan, was carved one by one in advance, and then pieced together to form a complete picture.

One screen shows the reunion of 108 outlaws in "Water Margin," one of the four great classical novels of Chinese literature, which tells the Song Dynasty (960-1279) story of outlaws who gathered at Liangshan Mountain to take up arms against the corrupt government.

The famous anecdote about how Liu Qing tamed an unruly horse was carved on another brick screen nearby.

An envoy from West Xia Kingdom (10 38-1227) sent a boisterous horse to the Song Dynasty government, claiming if no one could tame the animal, the kingdom would invade Song's territory.

General Liu stepped out, mounted the animal swiftly and bridled it quickly. The brick work was embossed with more than 40 characters, with a proud Liu riding in the center and the downcast envoy cast aside.

Wood-carving is the most popular decoration in the complex. The skill reached its heyday during the Ming Dynasty (1368-1644) and matured in the Qing Dynasty (1644-1911).

Each piece of wood in Chen's academy was engraved and embossed with historical anecdotes and auspicious patterns.

The beam on the door in the first courtyard was carved with the legend of the Queen Mother's (heavenly goddess) birthday banquet of longevity peaches, and the historical scene of King Cao Cao (AD 155-220) inspecting a military parade on a high platform.

Granite was used to build parts of the complex that were susceptible to erosion from winter weather and rain – in the forms of guarding lions, platform bases, stairs and posts.

The granite's light gray color starkly contrasts with the dark tone of the wooden structures to create a clear, well-arranged aesthetic.

Juxian (Talent Gathering) Hall in the central courtyard is the complex's main building, a place for the Chen clan's seniors to discuss business and, long ago, hold sacrificial ceremonies.

All of its beams and pillars are intricately carved, while the giant middle wooden screen with exquisite engravings is a national treasure.

The pottery sculpture on the ridge of the roof – 27 meters long and 4.2 meters high – was found to be a work by Wenrubi, a famous Guangdong pottery company during the Qing Dynasty.

The heads of the stone handrails on the platform in front of Juxian Hall were vividly carved into trays of pineapples, immortal peaches, finger citrons and carambola starfruit, all native to Guangdong Province.