Serving up camaraderie with a cup of tea 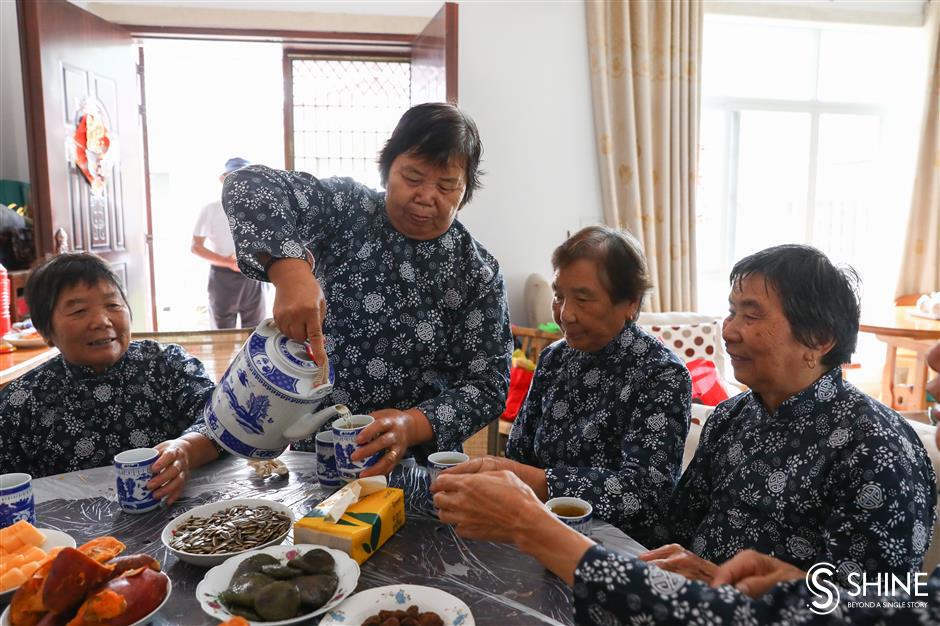 A granny pours the tea for the others around the table.

Most people tend to think of afternoon tea as a quintessential British custom that first appeared in the 19th century. Few may know that a China version can be traced back at least 700 years, and the tradition is not lost.

It is a Friday afternoon in the outlying Shanghai district of Qingpu. A group of around 20 older women is gathered at Zhu Huibao's home in Shangta Village.

Dressed in blue calico, the women, averaging 75 years old, chat amid tea and snacks. The social custom has a charming name – apo tea, or "grandma's tea."

"Come, come, sit down and eat," says 70-year-old Zhu, as she warmly invites me to join them.

"Eat tabing while it is still warm," Zhu says, reminding me of my grandmother's words. "The snack is mainly made of flour and pumpkin leaves. They are mixed together, fried and coated with a thick sugar syrup." 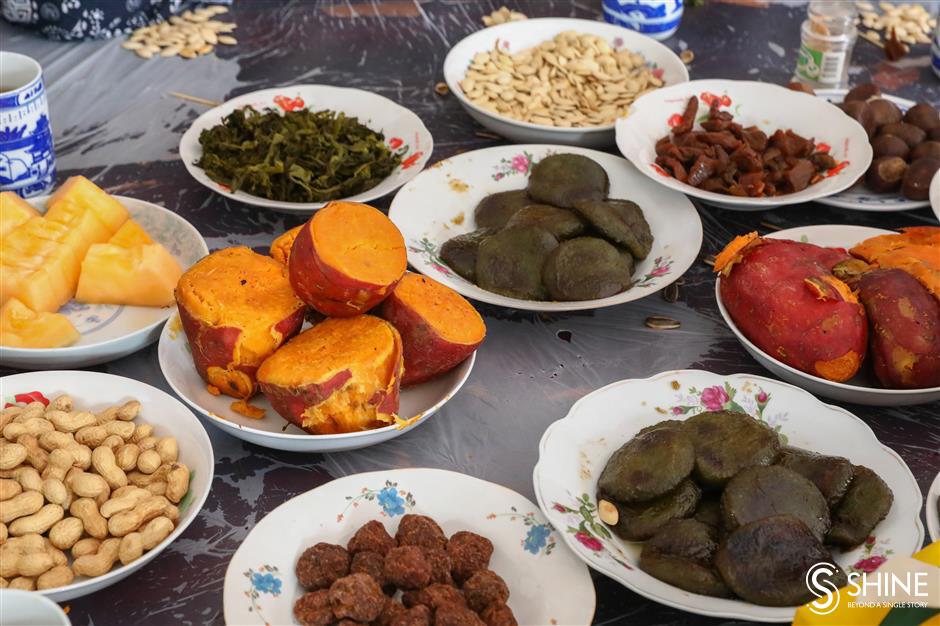 Local specialties like nuts, melon, pickles and cake are served at apo tea.

There are many legends associated with the origins of grandma's tea.

One involves a mysterious grandmother who planted tea trees on a mountainside and always shared her tea with villagers. In memory of her, the villagers named the tradition of having afternoon tea after her, and it was passed on down generations.

Another popular legend has it that Emperor Qianlong of the Qing Dynasty (1644-1911) once visited Shangta on a scorching day, flanked by bodyguards. Thirsty and tired, the procession came upon a group of elderly women sitting around sipping tea together and eating sunflower seeds.

Longing for a drink and using the word for "granny," the emperor cried out, "Apo, tea!" The women, not knowing his identify, provided him with drink, and he thanked them profusely.

Regardless of the credibility of the legends, it's certain that harmony has been always the fundamental principle of grandma's tea.

"The neighborhood relationship in our village is very good," says Zhu. "There are no conflicts that can't be resolved over grandma's tea."

Lacking a teahouse, the village women take turns hosting the afternoon tea party. Every hostess carefully prepares for the refreshments, though the fare is pretty standardized.

The tea itself is nothing special. It can be black tea, green tea or white tea. What is important is the get-together itself. The women seem to revel in the simplicity of the moment and in the company of one another. 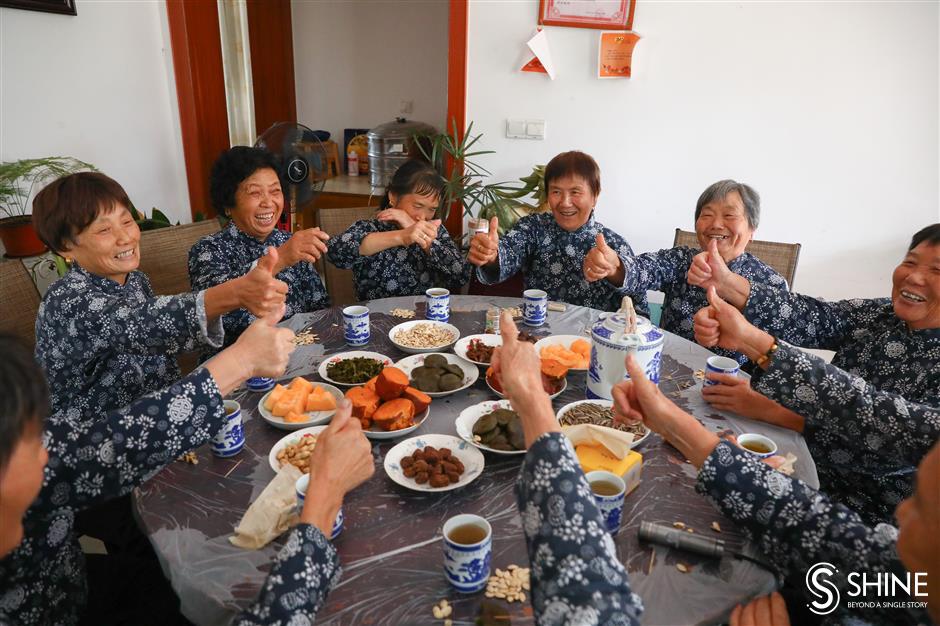 Dressed in blue calico, the women chat amid tea and snacks.

In the past, the men in the village went out to work in the fields while women stayed home to weave straw shrimp cages to supplement family income. To spice up their somewhat monotonous life, the women gathered together to do handiwork while chatting, drinking tea and eating snacks.

Although living standards have improved and the women no longer make straw cages, the afternoon tea has remained an indispensable part of their life, especially after so many children grew up and left the village to see their fortunes in the big city.

Afternoon tea is a rustic form of social networking. The women share gossip, problems, joys and sorrows. Theirs is a tight social bond.

"In spring, we often talk about farming," says Zhu. "For example, when to sow seeds and what kind of vegetable to plant." 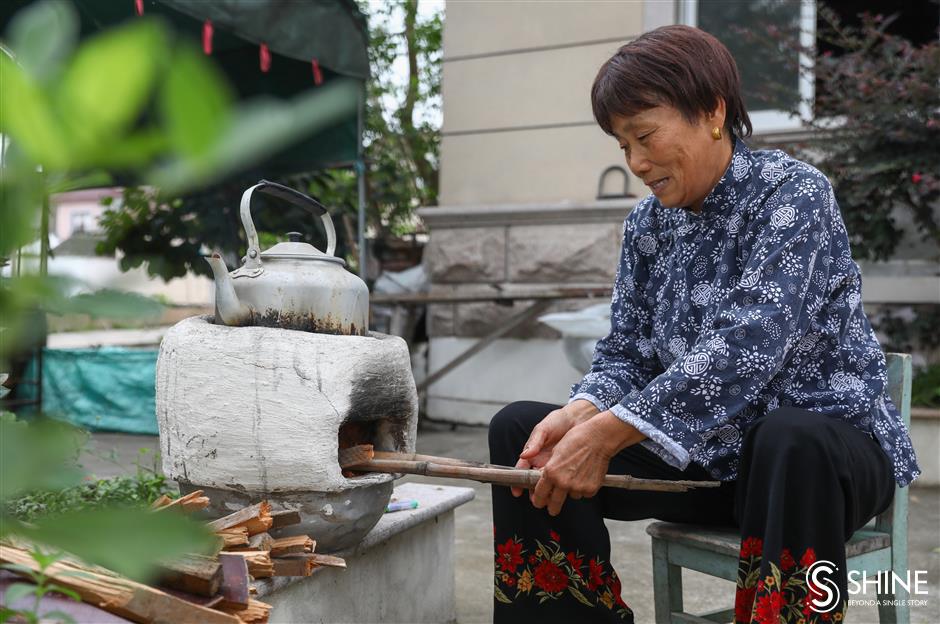 Zhu Huibao uses a traditional stove to boil the water for tea.

In front of Zhu's house, a large kettle with a blackened bottom sits on a traditional stove made of mud and straw. Zhu uses pieces of branches and bamboo to light a fire. The women tell me that water heated in this traditional way makes better tea. But when you are old, why bother with such hard work? The elderly women now use an electric kettle instead.

Grandma's tea has long played a significant role in local rituals. It is served on occasions like weddings, engagement parties, birthdays, baby showers, college exam success, Chinese New Year and the ceremonies celebrating the building of a new house.

With tea and snacks consumed, the village grandmothers sing a folk song before disbanding. The song refers with fondness to the tea tradition.

"We enjoy singing and dancing," says Zhu. "We would like it if people would invite us to perform. We are especially eager to share our tradition with foreign friends."

The grannies, before leaving, send me off with what little English they know.

"Hello." "Bye-bye." And "three-gram oil," which has a similar Chinese pronunciation with the word "thank you."

﻿
Special Reports
﻿
Serving up camaraderie with a cup of tea
ART021 opens another art fair, this time in Shenzhen
Sowing the seeds of a wider opera-loving public
Traditional instruments and technology co-star in an unusual exhibition
Fledgling musicians display the passion, creativity of youth
City promises a 'golden autumn' of art season performances
Prestigious city art fair announces this year's gallery line-up
Iconic sculptor aims to capture the soul of his subjects
Blurring lines between virtual space and reality
Annual cartoon and animation festival is going to start
EXPLORE SHINE