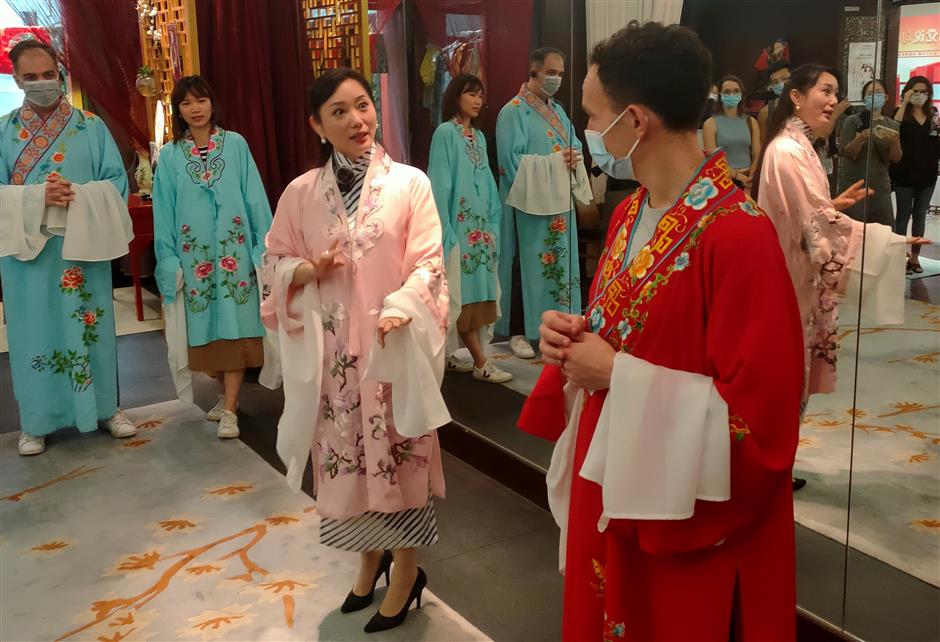 As a warm-up for the Shanghai Tourism Festival, a group of expats on a recent Sunday visited the SPSI Art Museum in Changning District to watch the academic series exhibition "N-Power Paintings," featuring works by modern Chinese artists.

The exhibition is one of Shanghai Oil Painting and Sculpture Academy's oil painting academic series exhibitions.

The exhibition area on the first floor presents the greatest creations of five different artists in recent years. The exhibition is not divided by artist, but displayed by paintings being interspersed with each other according to similarity of colors and emotional feeling. It is intended that viewers of the exhibition can see the transience of life and the flow of history through "things," which may lead to the understanding of "existence."

On the second floor of the art museum, each artist has built an area to display their individual paintings and research, so that people can see the form and appearance of their paintings through large-scale works. The works displayed are mainly oil paintings which are combined with various literature forms such as creative sketches, art notes and videos. This not only provide clues about each artist's style of research and creation, but also illustrates the trends and overall style of oil painting creation and research in Shanghai Oil Painting and Sculpture Academy.

The visiting expatriates were given an introduction to the works and artists so that they could have a better feeling and experience of China's modern art creation. Kris Van Goethem, managing director MICE, Leisure & sport of Thomas Cook DMC, told Shanghai Daily that he felt the exhibition was really interesting and rich in content.

Van Goethem and other visitors were told that one of the founders of the academy, a famous sculptor called Zhang Chongren (1907-1998), had a decades-long friendship with Georges Prosper Remi (1907–1983), better known by the pen name Hergé. The Belgian cartoonist is best known for creating "The Adventures of Tintin," the series of comic books which are considered one of the most popular European comics of the 20th century.

"I'm Belgian and very proud of 'Tintin.' Belgium and China are very friendly and the story is very good," said Van Goethem in fluent mandarin. Van Goethem was quite familiar with the friendship between Zhang and Hergé as well as Zhang's role behind "The Blue Lotus" – the fifth volume of "The Adventures of Tintin," which is set in China.

After the event, all visitors walked to the Cheng Shifa Art Museum of the Shanghai Chinese Painting Academy. An Exhibition of Works Featuring Xin'anjiang Hydropower Station is being held and will run through to October 24.

The exhibition, to celebrate the centenary of the founding of the Communist Party of China, displays works by painters of the academy in the 1950s and 1960s focusing on the construction and completion of Xin'anjiang Hydropower Station – China's first self-designed, self-constructed with self-made equipment, large-scale hydropower station.

Among them, the 7-meter-long masterpiece "Xin'anjiang" created by Lu Yanshao (1909-1993), Tang Yun (1910-1993), Wu Lifu (1900-1992) and Zhang Shoucheng (1918-2013) outlines the new panorama after the completion of Xin'anjiang Hydropower Station and reflects the concrete achievements of the transformation of Chinese painting from sketching to expressing the new life.

Apart from the classic works, there are also this year's new works by the painters of the academy. The juxtaposition of works with manuscripts, videos and documents is intended to show how the painters of the younger generation followed their predecessors to visit Xin'anjiang, and how they felt about the achievements of more than 60 years of construction and development, in particular since the reform and opening-up.

Visitors were shocked by the magnificence of the works and the excellent skills needed to produce them. Van Goethem told Shanghai Daily, "I'm European and have often visited all kinds of museums but I didn't know there were so many museums here. I am deeply impressed by Shanghai's strong cultural resources."

After the visit the expats went to Gubei Civic Center to attend a Chinese painting class and learn to decorate a round paper fan with color and brush.

Wonsook Hong, the first ever licensed foreign Traditional Chinese Medicine doctor in Shanghai, drew a rabbit on the moon. Hong, from South Korea, was very serious about her painting, drawing a connection to the Mid-Autumn Festival which falls on September 21 this year. She enthused " I love China and its culture and the lunar rabbit is a traditional pattern of the festival." Hong came to China in 1993. She looks forward to participating in more, similar activities in the future.

Meanwhile, Nishimura Takashi, president of Asahi Beer (China) Investment Co, said he was deeply impressed by the construction of Gubei international community, in particular the development of grassroots legislation, artificial intelligence and e-government. "China's development in the field of electronic information services exceeds that of Japan," Nishimura said.

He also expressed willingness to join the art tour of the international community after work and participate in relevant interest courses with his colleagues as a way to balance work and life. "We are usually too busy but would like to attend more activities like today's," Nishimura said. 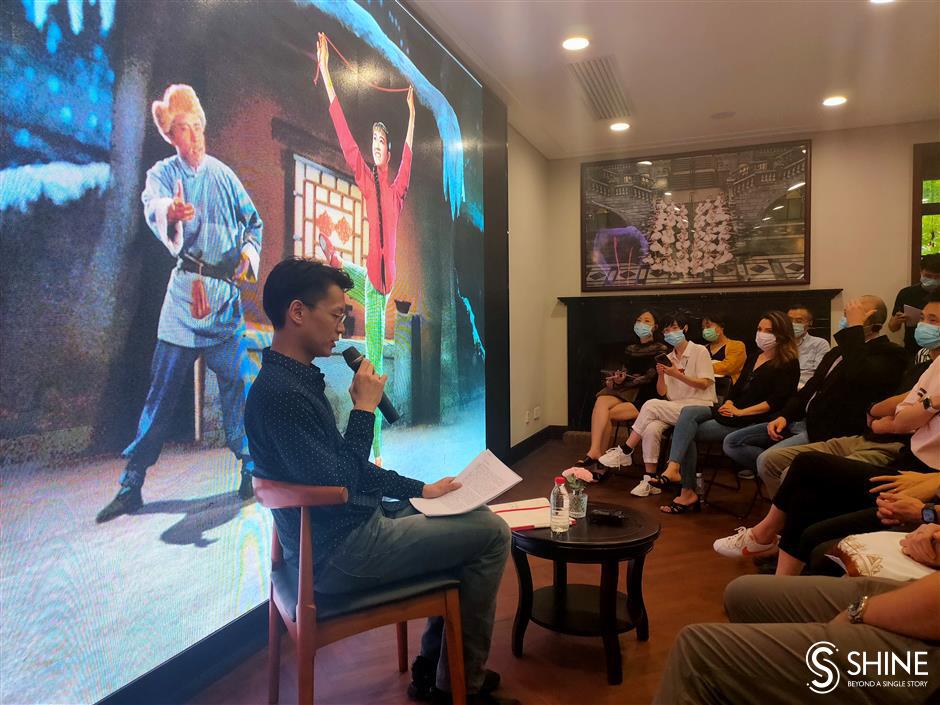 Charm of the Kunqu Opera

Expats participating in the afternoon activity enjoyed the style of Kunqu Opera in Gubei Civic Center. Under the guidance of Zhao Jinyu, director of Peng School Kunqu Art Center, foreigners learned the performance of Kunqu water sleeves and listened to the Kunqu excerpts displayed by Zhao.

Zhao, an apprentice of Kunqu Opera artist Zhang Xunpeng, hosts regular workshops with noted performers, as well as small shows aimed at cultivating interest in the Chinese opera among the city's foreign residents.

The center is a major milestone for Zhang and the style she developed, according to theater expert Mao Shi'an.

"Based in the Gubei international community, the center will help introduce Kunqu culture to the world," Mao once said.

Kunqu, which originated from neighboring Kunshan with a history of more than six centuries, is considered a source of all sorts of Chinese dramas.

Zhao, who is dedicated to promoting the oldest extant form of Chinese opera in the modern age, explained the most exquisite and central part of Kunqu in popular and easy-to-understand language.

She taught expats using water sleeves to implicitly express the sincere feelings between a young man and woman.

In front of the expats, Zhao also performed a classic aria "A Walk in the Garden" which is an excerpt of Kunqu Opera "The Peony Pavilion."

Ludovic Weber from France put on the costume and practiced together with Zhao.

After that, he told Shanghai Daily, "I see the delicacy of being polite and humble and I can feel the traditional Chinese culture behind the performance."

Weber has been in Shanghai for 5 years and is currently living in Changning. He said he lives very close to Gubei but he never visited the center before. "I want to take this chance to practice more. I think that I need more lessons…"

Astrid Poghosyan from Armenia graduated from Shanghai Conservatory of Music and works in Shanghai Symphony Orchestra. She spoke highly of Kunqu as a traditional Chinese art and the unremitting promotion of Zhao and her center from the perspective of a professional.

The next stop for the expats was Shanghai International Dance Center where they attended a class to appreciate the Ballet Repertoire "Bright Red Star."

Lucine Magand from France said that she had only participated in jazz festivals in Shanghai before and looked forward to the opportunity to watch the "Swan Lake" by the Shanghai Ballet on Christmas Eve.

Adam Strzep, a ballet aficionado from Poland, said that the dancers of the Shanghai Ballet are as professional and dedicated as their counterparts in Europe, and even better in some fields. "That's the cause why the Shanghai Ballet's performances in Europe are always very successful and widely praised," he added.