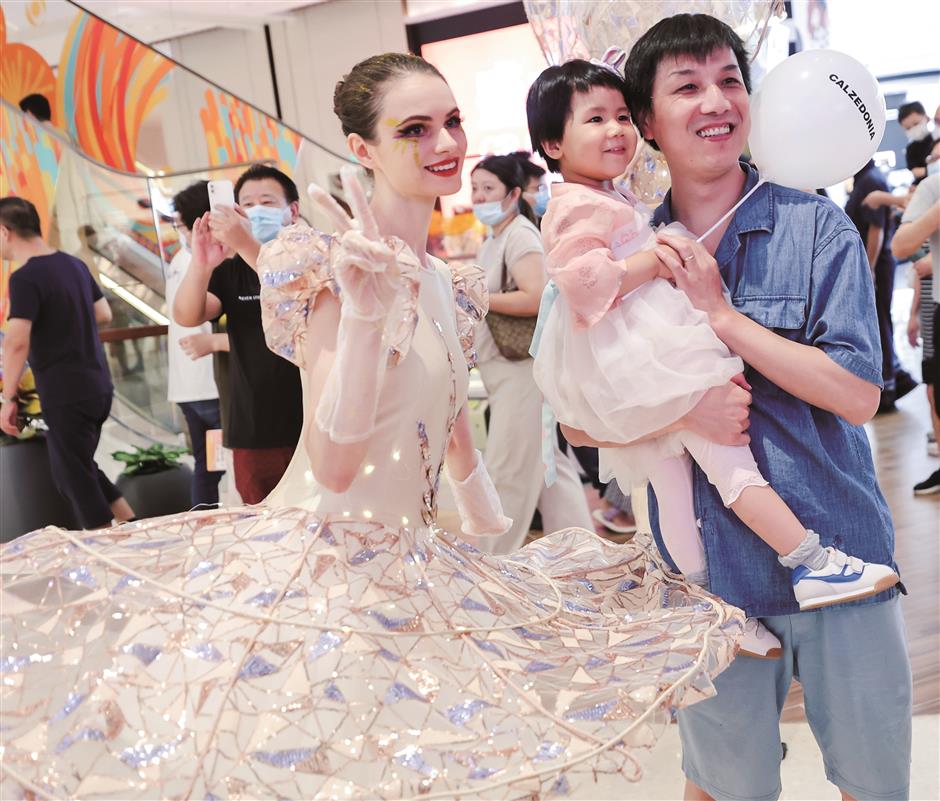 The newly opened Hall of the Sun attracts throngs of shoppers.

The Hall of the Sun, one of Shanghai's biggest commercial complexes, has opened near the North Bund in Hongkou District to enrich the prosperous commercial atmosphere of the waterfront.

The Shui On Land project is expected to become a landmark in the North Bund, which has been designated as the city's future Central Activity Zone along the Huangpu River.

The project connects with the Hall of the Moon, which is already open and in business at Ruihong Tiandi, together becoming a new "urban life hotspot" covering a total of 250,000 square meters in the northern downtown area.

The North Bund waterfront aims to become a business and commercial center on the north bank of Suzhou Creek and to be on par with shopping landmarks such as the Nanjing Road pedestrian street and Huaihai Road.

A number of new commercial complexes are popping up in the waterfront region.

According to the blueprint, the North Bund will have 500,000 square meters of additional commercial complexes built to enhance the riverside region.

About 8.4 million square meters of new construction space has been planned on the waterfront, equivalent to the total amount of urban space in Lujiazui and on both sides of Century Avenue in Pudong.

Plans for this area include dozens of top-level office buildings to house multinational firms' headquarters, international organizations and functional institutes.

The newly launched Hall of the Sun project mainly serves the large number of residents in the Ruihong Xincheng community, one of the largest urban renewal projects within the city's Inner Ring Road. The space around the Hongzhen Old Street area, once the largest remaining shantytown in Shanghai, is now an upmarket community.

The North Bund and its surrounding areas require additional major comprehensive commercial projects to meet the demand for upmarket living, business and consumption, according to the Hongkou government. Many brands have opened their first Shanghai stores in the new shopping complex. It aims to integrate art, culture, nature and life aesthetics together in a single project.

The complex features outdoor terraces covering some 4,000 square meters with multi-level greenery. Its dome covers 5,500 square meters in the shape of three lotus leaves and is the largest sky dome at any local shopping center.

Over 150 species of shrubs and trees cover the project indoors and outdoors, along with waterways, waterfalls and skywalks.

Brand-new business models have been unveiled apart from shopping and dining. Foodie Social, a food court blending Chinese and Western flavors, has attracted many local customers.

Other high-tech applications based on 5G communication technology can offer new shopping experiences in the mall.

As a highlight, a popular CityMart immersive street featuring food, scenes and costumes from popular martial arts novels has been unveiled in the complex. Customers can dress up like kungfu masters or heroes and eat at the taverns and restaurants.

Meanwhile, Muji's meal solution supermarket will open its first store on the Chinese mainland within the mall.

The complex's art ambiance also stands out. A famous contemporary sculptor has created an iconic artwork entitled Funny Sun at the mall's entrance.

Musical groups and stars such as the girls group AKB48 Team SH and other 10 famous singers will perform regularly.

"Hongkou is Shanghai's most densely populated area with a large consumer group and stable consumption power," said Carol Chen, director of Commercial of THE HUB & RHXC CXTD Content Innovation Department, which is in charge of the project. 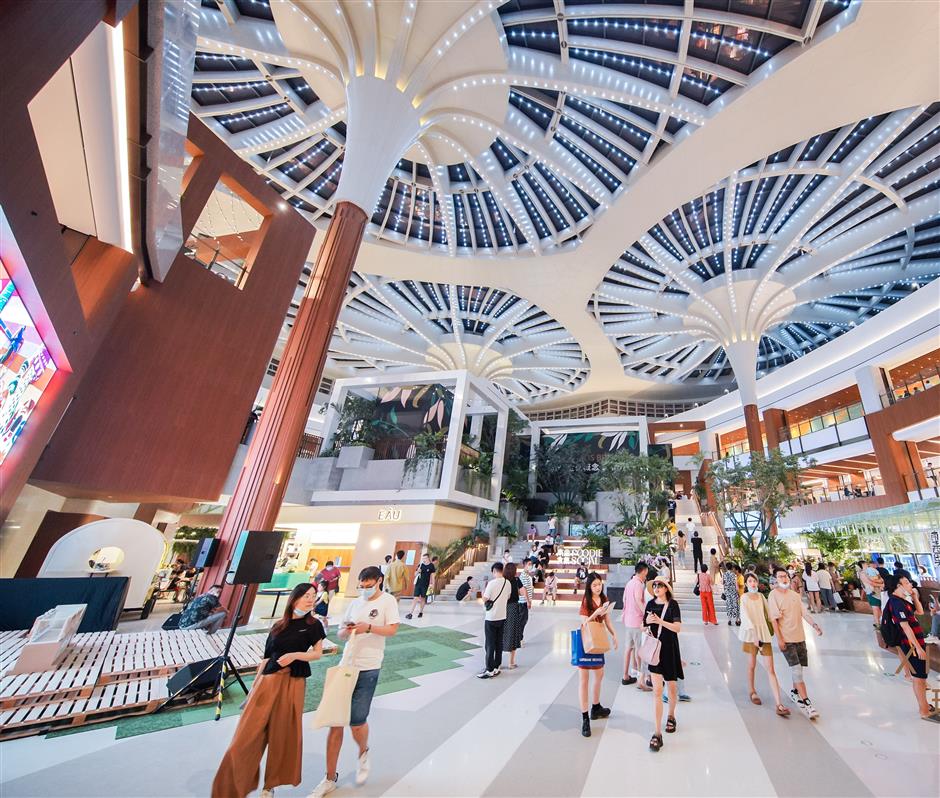 The Hall of the Sun

New round of development

The project's opening coincides with a new round of development on the North Bund. It will help enhance the regional economy of the waterfront and become a new commercial landmark of Shanghai, Chen said.

The commercial history of the North Bund area dates back to the late 19th century. The British East India Company built the first barge dock between Dongdaming and Gaoyang roads in 1845, two years after Shanghai opened its port to global business. Over 20 docks and a dozen warehouses lined the waterfront, making it the most important shipping port in the city. Many of the city's earliest hotels, restaurants, and stores were opened near the busy docks to serve arriving passengers.

Foreign celebrities, such as Albert Einstein, Charlie Chaplin, Bertrand Russell, and Bernard Shaw, first set foot on Chinese soil at the North Bund port. The nation's first group of students to study abroad set sail from there as well.

The North Bund possesses other distinctions. China's first electric lamp was illuminated there, and it was also the site of the nation's first telephone call and the first movie screening.

Due to its ports being located there, the area absorbed culture, both from China and the world in the 20th century. It became one of the most popular commercial destinations in the city.

During World War II, the shikumen, or unique Shanghai stone-gate residences, on the North Bund offered safe haven for many Jewish refugees fleeing the horrors of Nazi Germany. About 23,000 Jews found shelter in the city, particularly in the Tilanqiao area of the North Bund.

The Jewish residents later opened a swathe of stores and cafes in the area, which was once nicked "Little Vienna" for its prosperous business atmosphere.

Hu Guangjie, director of Hongkou District, said the ongoing North Bund development provides an unprecedented opportunity for the region, and it will be the largest regional development plan in Shanghai since the 1990s.

"In the future, the North Bund will focus on businesses and offices, as well as public culture and commercial services to cooperate and differentiate from the Bund and Lujiazui on the opposite side of the river," Hu said.

"The North Bund will be developed into a top urban core region, central activity zone and a world-class parlor of Shanghai."

In April, 2019, the commercial complex at the tallest building in Puxi officially opened to public, featuring exhibitions and fashion shows.

The shopping center at the 320-meter-high Sinar Mas Plaza, also known as the White Magnolia Plaza, on the North Bund has become one of the most popular shopping destinations in the riverside region.

Catwalks featuring fashion brands in the center and a photo exhibition of 100 unusual jobs in Shanghai are held in the central square of the complex.

Other parts of the plaza have become offices for many of the world's top companies, mainly in the shipping, finance, and fashion design industries.

A key attraction is Miniature World, a 300-square-meter artwork that restores historic scenes of the Bund. It was done with the participation of many historians from Fudan University.

Historical events, such as the establishment of the statue of the Goddess of Peace, are showcased in the mini-masterpiece. Even the toll of the clock tower of the Bund has been restored.

Over a dozen artists spent about 18 months creating the work. An LED illumination system simulates night and day over the Bund. The work features more than 15,000 figures, 500 vehicles, and 300 river vessels.

Other entertainment venues at the site include the Dinoman theme park, a Legoland, and a Lanehub experience store.

The SIIC Center, developed by the state-owned Shanghai Industrial Investment Co, covers 22,500 square meters on the waterfront of the Huangpu River. It is composed of a 180-meter-tall tower building, a grand theater boasting 1,700 seats, and a commercial facility covering about 46,000 square meters.

"The North Bund serves as the birthplace of the Haipai Cultures and the SIIC group," said Zhou Jun, president of the group. "The project takes is part of the world's vertical city development experiences and contributes to the future development of the North Bund."

The SIIC Center, scheduled to be completed by the end of 2021, will include a listed historical structure, the former residence of Nie Er (1912-1935), the composer of China's national anthem.

The tower building, covering about 10,000 square meters, will be developed into a top-level "green construction" project with LED environmentally friendly certification.

The grand theater covering 14,000 square meters has been dubbed the "crown of art on the North Bund." It will stage operas, musicals, stage dramas and Broadway-style performances.

Dongdaming Road, where the theater has been planned, was formerly named Broadway Road because the street hosted Shanghai's "oriental Broadway shows" in the early 20th century.

The theater will be connected with the former residence of Nie. The 210-square-meter house aims to preserve the cultural history of the place. Other key commercial projects on the North Bund include the city's third Raffles City mall.

The world's 10th and Shanghai's third Raffles City commercial complex has opened in Hongkou to further boost the prosperity of the North Bund waterfront.

Raffles City The Bund is located in the core region of the Huangpu River waterfront. It covers about 420,000 square meters above Metro Line 12's Tilanqiao Station.

The new landmark shopping mall, nicknamed "Inspiring City," is intended to be an integrated platform for culture, art, technology and tourism, according to the Hongkou government.

Over 200 business tenants, accounting for 92 percent of capacity, have chosen the complex. More than half of the businesses are new to Shanghai, East China, or China as a whole.