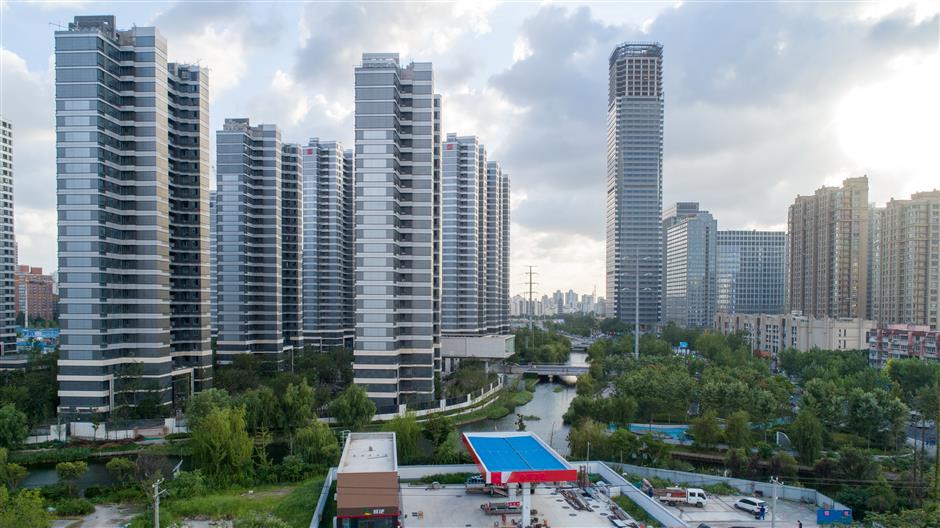 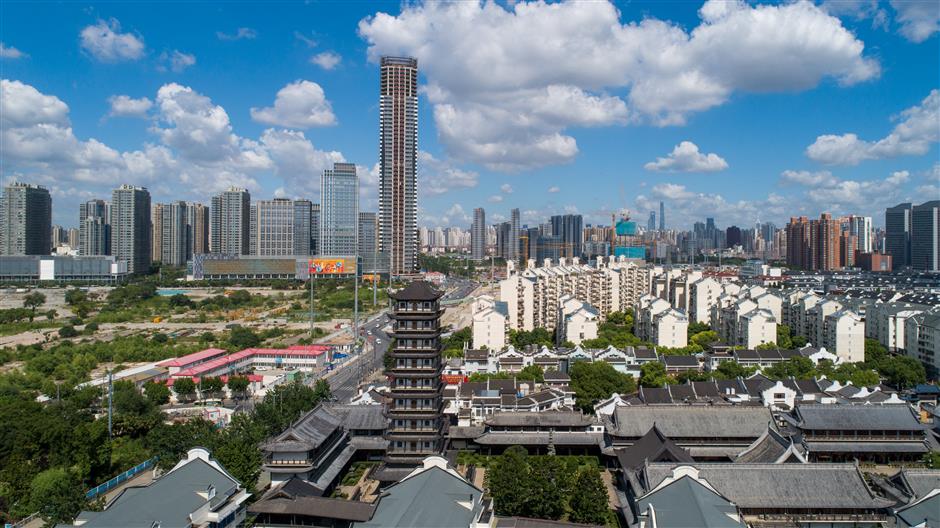 The historic Zhenru Temple and the Zhenru Pagoda 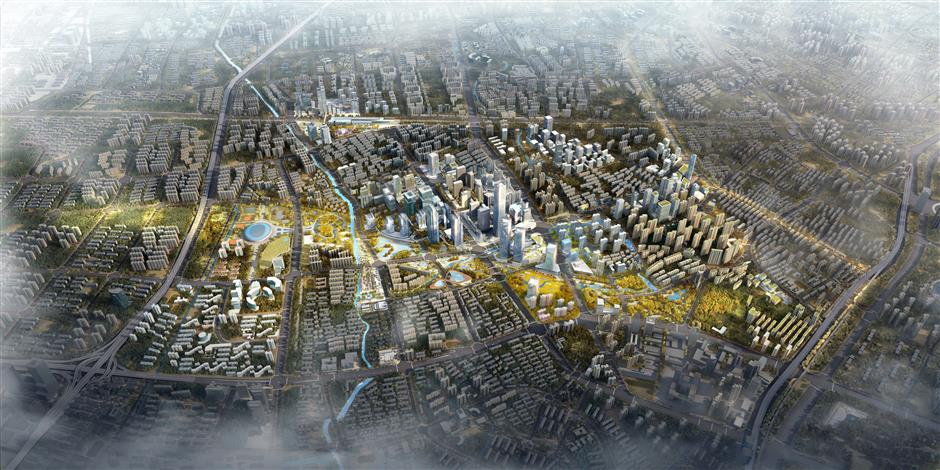 An artist's rendition of the Zhenru Subcenter

Shanghai's Zhenru, which dates back to the Song Dynasty (960-1279), is to become a "reception room" for the Yangtze River Delta region.

The town in Putuo District is approved by the central government as one of the key subcenters in Shanghai's downtown to become the new driving force for the city's development along with the new towns.

Zhenru was originally formed between 1208 and 1224 when a monk built Zhenru Temple and a Xianghua (scented flower) bridge, which brought worshippers to the area. Markets later developed around the temple, which still exists, along with Zhenru Pagoda.

The town, formerly known as Taoxi, or peach creek, sat between the former Jiading and Shanghai counties. It was known as one of the city's four most prosperous historic marketplaces.

The Zhenru Subcenter, covering 6.16 square kilometers, extends to Fuping Road-Jiaotong Road to its north, Zhenbei Road (Middle Ring Road) to its west, Wuning Road-Zhongshan Road N. (Inner Ring Road) to its south and Langao Road to its east. It is the transport hub in northwest Shanghai thanks to its premium location as well as the Shanghai-Nanjing Railway, the Shanghai West Railway Station and multi expressways that pass through it. In addition to the convenient railway and road networks, its rich culture, excellent environment and multifunctional planning will contribute to realize the subcenter's bid to become Shanghai's "reception room" to the Yangtze River Delta.

Construction is in full swing for the Zhenru Subcenter in with new cultural and commercial landmarks. Major infrastructure projects have been completed and the 5G network covers most of the region, according to the Putuo district government.

Multiple key commercial projects, including the Orstar City, Greenland Being Fun, Tianyue Center and the Upper West Shanghai, are near completion in the core of the subcenter.

Construction has started on the Zhenrujing, a key commercial complex in the core region of the subcenter. The project is being built above the Zhenru station of Metro lines 11 and 14. The complex includes business facilities covering 300,000 square meters, 150,000-square-meter shopping malls and a theater as well as residential communities, greenbelt and underground space. It is expected to be completed in 2023.

Despite the COVID-19 pandemic, Putuo has become a popular site for start-up firms and new investment among downtown districts, thanks to its development potential and strategic location amid the push for the integrated development of the Yangtze River Delta region.

The district, known as Shanghai's "northwest gateway," has attracted more than 100 new companies since January, fulfilling its whole-year target for investment promotion ahead of schedule.

Five multinational headquarters, such as Roquette, a pioneer of new plant proteins from France, and Japan's Toppan Printing, have signed up to operate from Putuo recently, attracting a total of US$1.215 billion in foreign investment between January and September this year, a 15.2 percent increase from last year.

A large number of headquarters of companies from the Yangtze River Delta region, especially fintech companies, have gathered in Zhenru, according to the subcenter's management committee.

Apart from the Zhenru Subcenter, Putuo's major attractions include the Suzhou Creek waterfront, the China-Israel Innovation Hub and the International Innovation Center of Tsinghua University Shanghai and Taopu Smart City, according to Jiang Dongdong, Party secretary of Putuo. 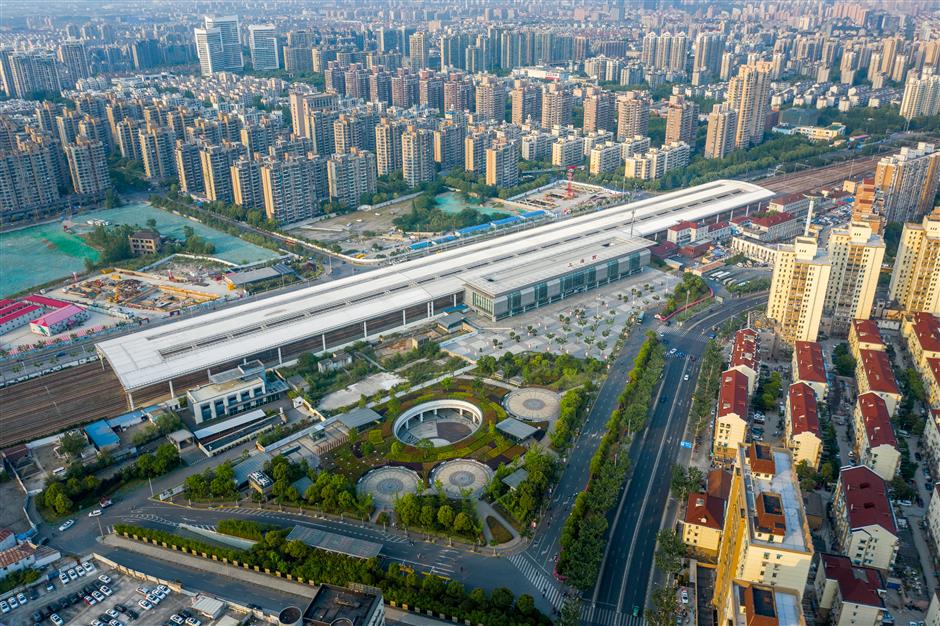 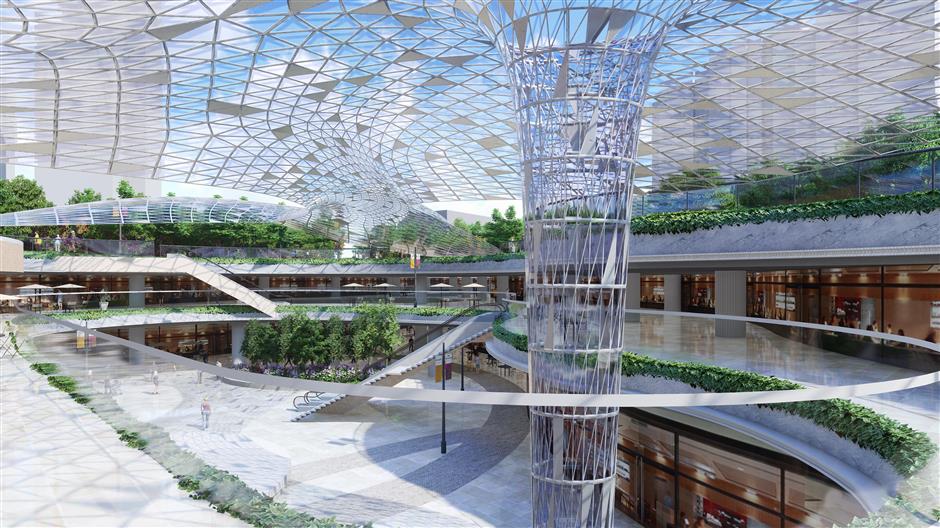 An artist's rendition for a Metro station of lines 14 and 15, which is slated to become the most beautiful subway station in Shanghai.

Haina Town, a new high-tech town to be built in the Zhenru Subcenter, will become a highlight project and a key site to drive the city's digital transformation.

Haina, which means inclusiveness and integration, will become home to the latest digital applications and innovative start-up projects.

It will develop together with Cloud Town in neighboring Hangzhou and Xuelang Town in Wuxi. Both projects are known for cloud computing, big data and Internet of Things developments under the integrated development of the Yangtze River Delta region, Yu told this year's Suzhou Creek Forum in Putuo.

The forum was initiated in 2007 for local political advisers and intellectuals to make proposals for the city's development. This year's event was themed on the "Construction and digital transformation of Haina Town."

The town, covering 3.12 square kilometers, will mainly attract high-tech incubators and research institutes as well as recreational and commercial facilities. A large swathe of smart applications such as unmanned service centers and intelligent senior care systems will be applied across the town, according to the blueprint.

It will become the source of Putuo's scientific innovation sector and core area for the development of digital technology.

The town will have four core sections – "innovation engine," "integration sitting room," "innovative incubation" and "mix of thoughts." It will feature offices and living areas with rivers, lakes, parks and forests. Economic development and ecological environment will be equally important to the town's development.

Wang Jian, a member of the Chinese Academy of Engineering and founder of Alibaba Cloud, has been appointed honorary director of the town. He shared the digital transformation plans for the town at the forum.

Upon its completion, the high-tech town will become a key hub of the "Along Shanghai-Nanjing Industrial Innovation Belt," one of the most dynamic economic zones in China. The belt includes Shanghai and five other Yangtze River Delta cities. The land area accounts for just 0.4 percent of the nation's territory, but contributes 10 percent of China's gross regional product.

Putuo serves as the main traffic hub along the belt, because it is the beginning of the Shanghai-Nanjing Expressway.

The three towns along the belt are expected to cooperate with others in talent exchange, capital support and other fields in the near future, according to the Putuo government.

"Putuo aims to become Shanghai's 'key engine' and main source of scientific innovation," said Li Wenbo, director of the district's science and technology commission. The district government is soliciting pilot applications in the digital transformation of the economy, daily life and urban governance as part of Shanghai's ambition to become an international capital for digitalization. 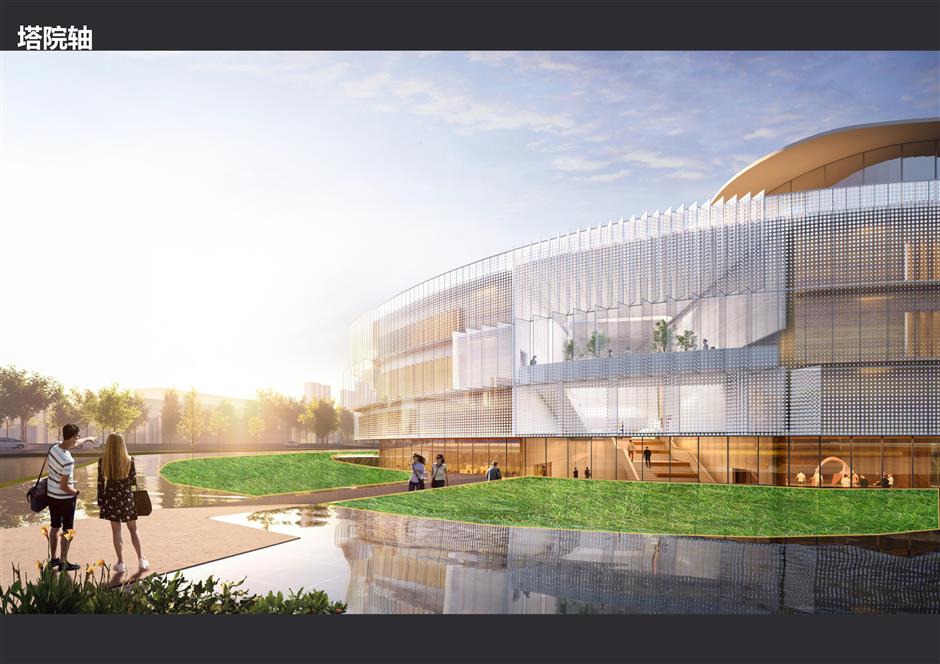 An artistic rendition of the Shanghai Haina Academy of Engineering

To support the development of the high-tech town, Shanghai has launched a key research institute on digital transformation.

The Shanghai Haina Academy of Engineering was initiated in the Zhenru Subcenter to focus on the latest digital applications and attract innovative start-up projects.

Shanghai Executive Vice Mayor Wu Qing unveiled the academy, which will become the innovation core of Haina Town being developed in the historical Zhenru area.

The academy will work with similar academies in neighboring Hangzhou and Wuxi cities in Zhejiang and Jiangsu provinces, respectively, to drive the integrated development of the Yangtze River Delta region and become a key pilot on global urban digitalization, the Putuo government said.

The academy will create an open platform for the research and development of smart urban operation applications. Global researchers and scientists are welcome to conduct experiments at the academy. Small and medium-size enterprises will be encouraged to release their innovation applications on the platform.

The academy will also host a regular "night forum" event to invite experts and scientists to share their latest achievements on digitalization.

The first batch of builders of key smart scenarios for the town have signed up to base themselves in the academy. They include the Commercial Aircraft Corp of China, the developer of China's domestically developed jetliners, and Ruijin Hospital.

From January to April this year, the Zhenru Subcenter has introduced 254 projects, with a total of 4.178 billion yuan in newly-added registered capital. On average, two companies settled here every day, the district government said.

Meanwhile, the former sites of Shanghai's largest seafood market and Putuo's biggest urban village are being transformed with skyscrapers and commercial hubs.

The Tongchuan Road Aquatic Product Market and Hongqi Village have been demolished to make way for the core of the Zhenru Subcenter.

The former Tongchuan Road market, which was shut down in November 2016, will be developed into the "Yi Street" project by the end of 2025, featuring industry, commercial, accommodation and cultural venues.

Shanghai Film Palace, an international movie and cultural exchange landmark, has been planned for the site to boost the film industry while serving locals' cultural demands.

Construction has started on a Metro station for lines 14 and 15. It will feature a "water curtain rooftop" and underground commercial facilities.

Design institutes from home and abroad are invited to map out the area's blueprint. Commercial complexes will start construction around 2024, and the project is scheduled to be completed by 2025.

Hongqi Village, a former notorious run-down urban settlement, has been listed among the first batch of demonstrations in the makeover of the city's remaining urban villages. Hongqi will become a project featuring office buildings, commercial and cultural sites and residential communities.

Sightseeing paths have been planned for visitors to enjoy both the riverside greenery along the Zhenrugang, Dachangpu and Taopu rivers as well as the Caoyang Community, which sprang up in 1951 as a home to model workers of the city and has been listed as a heritage site. 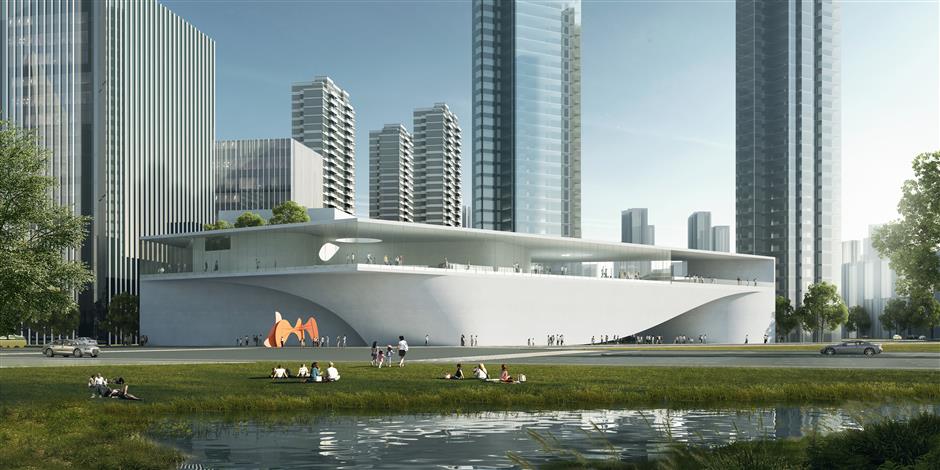 An artistic rendition of the Zhonghai Theater

As another key project in the Zhenru Subcenter, the Shanghai Sports Palace is receiving a major renovation to become a key public sports and exercise center for the west Shanghai.

The palace at 1860 Daduhe Road will feature a standard baseball field, which will become the main site of Shanghai Baseball Team and China's National Baseball League.

It will include a stadium with 10,000 seats for basketball and ice hockey games as well as performances and exhibitions.

A public sports center will open to citizens for basketball, badminton, swimming, football and rock climbing. The center can serve as a training base for professional athletes.

The neighboring Zhenru Park will be integrated into the key sports venue to become a sports park. Outdoor basketball courts, football pitches, tennis courts and skateboarding sites will be built amid the trees and plants within the park, according to the blueprint.

Furthermore, a new landmark theater will be built in Zhenru to serve as the main stage for the popular comedy and culture brand Mahua FunAge.

The Zhonghai Theater will have 1,000 seats and multifunctional theaters for stage dramas and movies.

Upon its completion and grand opening by the end of 2022, the theater will feature immersive performance spaces, exhibition halls, art galleries, cafes and outdoor stages. A sightseeing platform on the rooftop will open free to the public around the clock.

The landmark building neighboring the Zhenru Greenbelt will serve as the headquarters of Shanghai Mahua FunAge, which will move their performances, offices and rehearsal sites into the theater.

The company, established in February 2014, has become a popular stage drama producer in the Yangtze River Delta region. More than 600 stage comedies are performed in Shanghai and neighboring provinces every year, attracting an audience of nearly 450,000.

Popular works include modern comedy plays "Goodbye Mr Loser" and "Earl of Wrong Mountain," a story about a young unemployed man who unexpectedly inherits a big fortune, but is mistaken for a robber by the police and put on a wanted list, leaving him no choice but to embark on a journey of self-rescue.