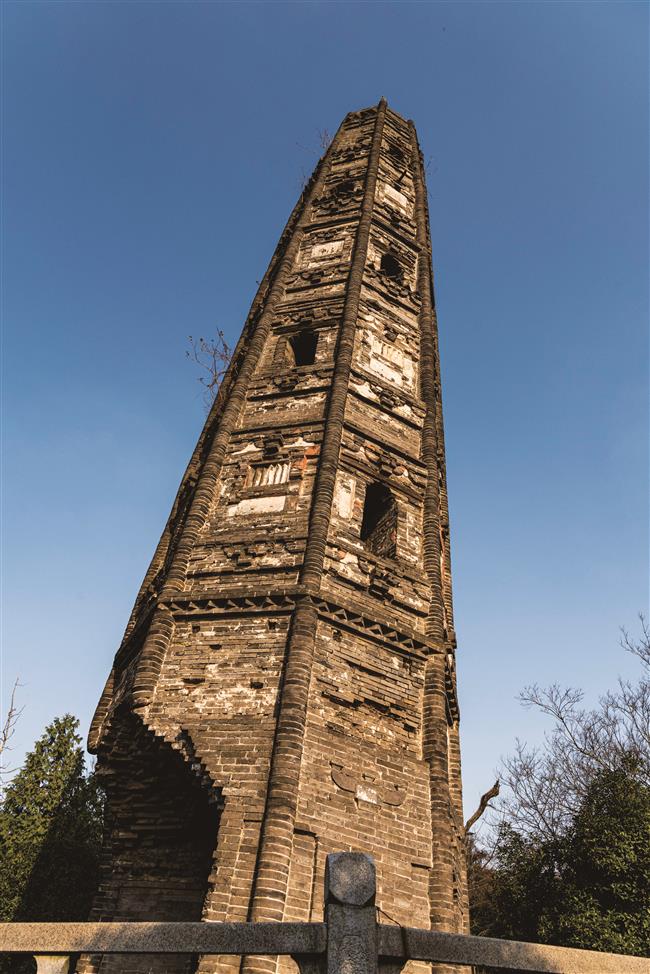 Huzhu Pagoda on Tianma Hill in Songjiang District stands tall despite tilting at a 7.1 degree angle. The seven-story, brick-and-wood, double-pyramid pagoda was built in 1079 during the Northern Song Dynasty (960-1127). Standing 18.8 meters high, it had an eastward deviation of 2.28 meters as of 2015.

A legend about the pagoda was recorded in Mingzhai Xiaozhi, a collection of anecdotes by Qing Dynasty (1644-1911) literati Zhu Lian.

According to the legend, villagers once celebrated the Lantern Festival, the fifteenth day of the Lunar New Year, at a temple on Tianma Hill. They lavishly set off firecrackers, sparks from which ignited Huzhu Pagoda. Having no immediate access to a river or fire extinguishing equipment, people helplessly watched the pagoda reduced to a brick structure. Coins were later found in cracks in the pagoda and people flocked to dig them out, creating a two-meter hole in the tower's northwest corner, at which point the tower began tilting to the south.

According to Yang Jiayou, an expert on ancient architecture, the formation of the tilt is due to different soil conditions on the hill. The soil in the hillside's southeast is deep, while it is shallow in the northwest. However, the structure has not collapsed due to its design and high-quality building materials.

In 1982, the Shanghai Committee for the Preservation of Antiquities created a special team to do research and preservation work on the pagoda. Repairs on it ran from 1984 to 1987 and resumed in April 2020.

Light on the Huzhu Pagoda has been recorded by photographer Weng Weisheng.

Directions: Take Metro Line 9 to Dongjing Station, then get on the Line Songjiang-Zhujiajiao Bus to the Shenzhuan Highway Tianji Road Station and walk about 3 kilometers to the pagoda.