A series of activities to celebrate the New Year were held in Jiading District, including calligraphy writing, performances and lighting and praying.

Besides, the Spring Festival, the biggest festival of Chinese people, is coming soon starting from January 31. People from all walks of life are preparing for the festival which is meaningful to every Chinese. The year 2022 celebrates the Year of the Tiger which can be seen in decorations around the district now.

Following are stories of what Jiading residents are doing to celebrate.

To their melodious tones, the singers boated down Lianqi River and gathered around the Fahua Pagoda. The song "Singing Folk Song Again" started the celebration of the new year.

At the following ceremony, the Fahua Pagoda and the immersive light and shadow block were lit, lighting up old Zhouqiao Street and adding a full sense of ceremony to the elegant "Green and Blue" season which is an important cultural brand in Jiading with its background of history and culture. It offers an immersive theme activity with a sense of ceremony and festival atmosphere.

The light and shadow block is a highlight this winter. It represents district elements such as the Jiading stories and sceneries, Confucianism and Chinese ancient poetry in the Zhouqiao historic preservation zone to show 800 years of profound cultural background of the area.

"In addition to the light and shadow block, there are also experiences such as New Year blessing and wishing and activities to promote intangible cultural heritage to integrate tradition into modern life," said the organizer Jin Xiaoyan.

At the opening ceremony, many residents prayed and made wishes, wrote their wishes for the New Year on the prayer sign and hung up the prayer device by hand. Some included:

"I hope everything goes well … in the new year."

"I wish to study hard and make progress every day."

"I wish the old and new complement each other." 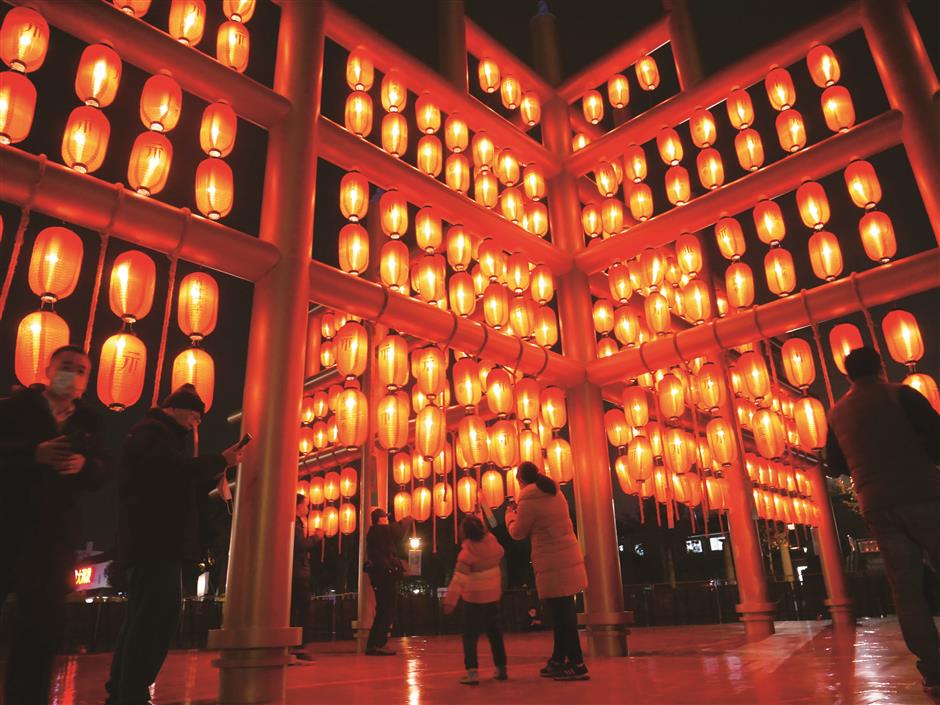 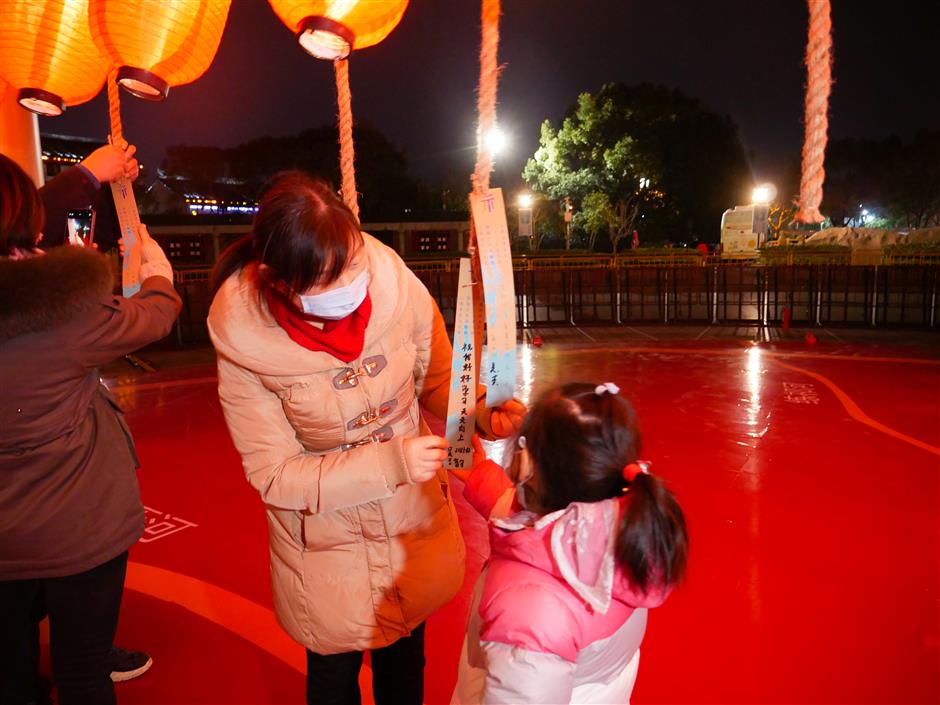 A mom and her daughter write down their wishes for the New Year on the prayer sign and hang at Fahua Pagoda.

A charity market was held in the hall of Jiading Cinema early in the morning of the first day of 2022.

"Young shopkeepers" decorated the stalls with toys, books, small handicrafts and paintings, priced the goods and formulated their own sales strategies.

"My mother and I sorted out a lot of toys for sale, and donated the money to people in need," said Zhang Haoming who warmly introduced his "preferential scheme" to customers.

"I hope that through the charity sale, children can experience the transaction process and learn to help people in need through their own efforts," said Zhang's mother.

All the money from the charity sale will be donated to the Red Cross Society of Jiading District for humanitarian projects. 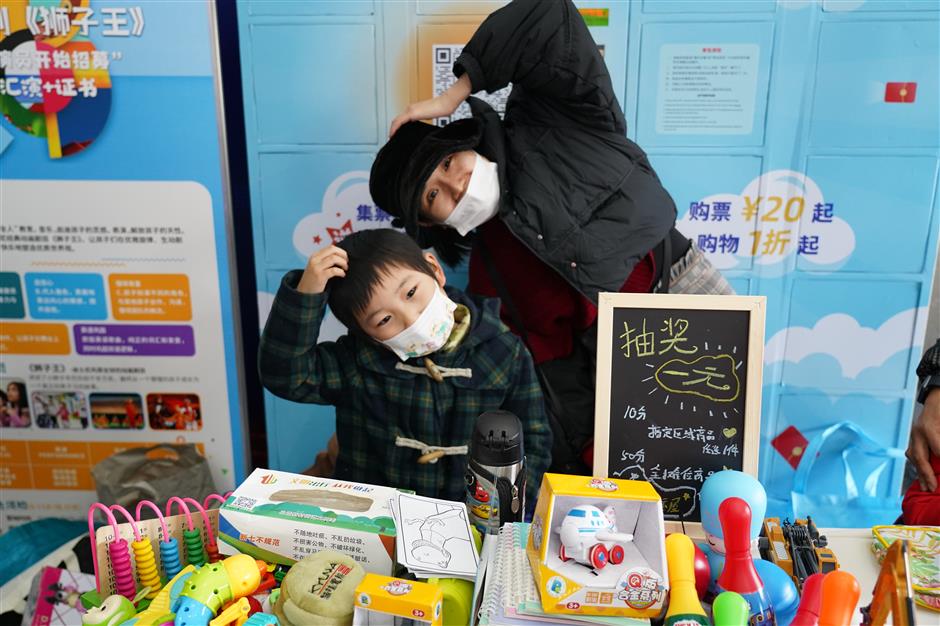 Zhang Haoming and his mother pose at a charity market held in Jiading Cinema on the first day of 2022.

More than 260 dance institutions and troupes from around Shanghai gathered in Jiading on January 1 to attend the first Poly Dance Festival at Shanghai Poly Grand Theatre.

More than 1,000 dances were staged over the five-day festival.

Young dancers from Putuo District turned into "Little Tigers," opening the festival with their energetic performance.

"Standing on such a big stage on the first day of the new year, I am proud of her. I believe it will be an unforgettable memory," said a man surnamed Sun, recording his daughter's performance on the stage with his mobile phone.

Classic Dunhuang dance with the traditional performing elements of shuixiu, or water sleeve which has long, cascading sleeves, took audience members to the mysterious and beautiful Dunhuang.

The young dancers rotated and stretched the water sleeves, drawing beautiful arcs. The whole performance was like a Dunhuang mural.

Young dancer Xia Nuoyi had practiced for two years, and it was her first time participating in the art festival. In order to stand on the stage in perfect condition, she had to practice repeatedly every day.

"I'm very satisfied with my performance today, and it was the best New Year gift for myself," she said.

A spectator surnamed Wang said it was an amazing performance. "I didn't expect the young performers to have so much energy," Wang said.

"We invited a number of experts to form a professional team to comment on the performances to provide guidance for the dancers," said Qin Tiji, chairman of Shanghai Poly Grand Theater Management Co Ltd.

"In the next stage, we will introduce more high-quality art education resources and open a new chapter of aesthetic education." 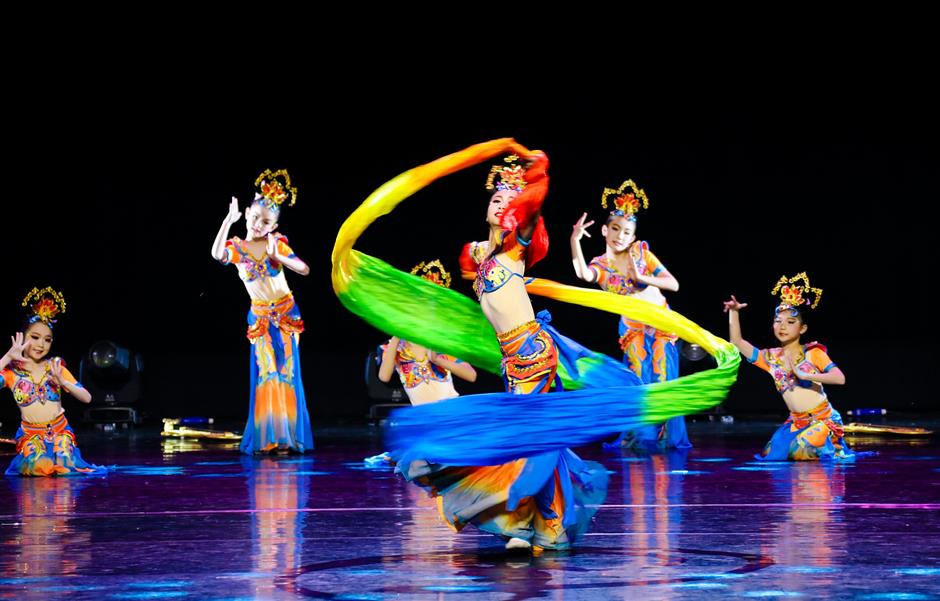 Classic Dunhuang dance with the traditional performing elements of shuixiu, or water sleeve which has long, cascading sleeves, took audience members to the mysterious and beautiful Dunhuang.

A New Year concert was held on the afternoon of December 31, 2021 at the Bilingual School Affiliated to East China Normal University. The school's symphony orchestra and cello orchestra took turns as teachers and students welcomed the arrival of 2022 with wonderful music.

The students in the symphony orchestra, dressed formally and under the command of Chang Lin, professor of Music Department of East China Normal University, played the "Best of Beethoven" to pay tribute to the extraordinary year of 2021.

The main melody of happiness followed as the audience was inspired by "China in the Lights," feeling the greatness, prosperity and strength of the motherland.

The performers of the chamber orchestra skilfully presented "Four Seasons," expressing the flow and reincarnation of the four seasons through the collocation and collision of different musical instruments.

The students performed "Hemerocallis Flower" with their mothers, and the sound of the flute warmed the whole theater. At the end of the New Year concert, the teachers and 200 students on the stage played together to wish the motherland peace and prosperity in 2022.

Students at the Bilingual School Affiliated to East China Normal University played the "Best of Beethoven" to pay tribute to the extraordinary year of 2021.

On a recent morning, Huangjia Garden Kindergarten was full of laughter and fun!

Lovely children had great fun when performing a dragon dance on the playground.

"Madam, I'd like to learn to make goldfish dumplings!" said five-year-old Huang Minghao getting into the fun of the "colorful dumpling shop."

He took the stuffing, stained with water, folded it in half, pinched the edge and made the lace under the teacher's guidance.

Wang Muyan, 5, learned to rub the Chinese fu (福) character which means happiness, blessing and good fortune. She watched every step of rubbing fu and learned it in different writing styles. She then wrote a fu on red paper herself, and said she would take fu home.

In the "soybean milk shop" on the other side, children were busy adding water and beans, and worked hard to grind soybean milk. In front of the shop, there are many children waiting to taste.

Huangjia Garden Kindergarten celebrated the Spring Festival through traditional customs in the form of a market loved by children. Children in different groups visited the "market" and immersed themselves in traditional Chinese festival culture.

Picture books to introduce relevant customs and activities were placed on each "shop" in the "market," so that the traditional cultural knowledge could be learned and the seeds of traditional culture sown in the hearts of the children. 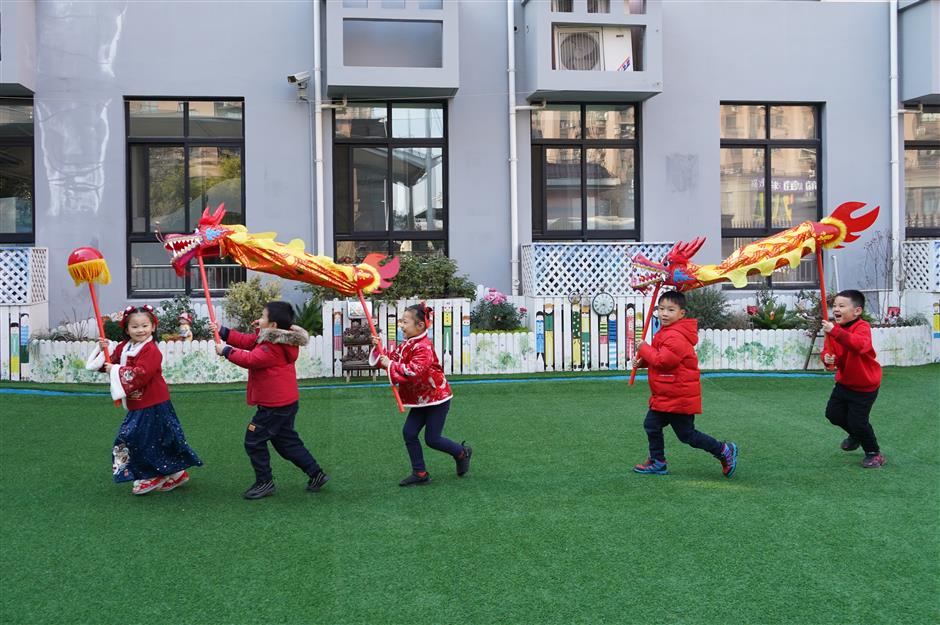 Children at Huangjia Kindergarten perform a dragon dance on the playground.

A creative calligraphy activity was held in Juyuan New Area to celebrate the New Year.

Zha Siren, a teacher of Juyuan Haimo Painting Academy, designed blessing characters in a creative way. Zha is good at combining characters with the Chinese Zodiac to form graphic art characters that are popular with residents. So, he applied this idea to the creation of fu character for the New Year. 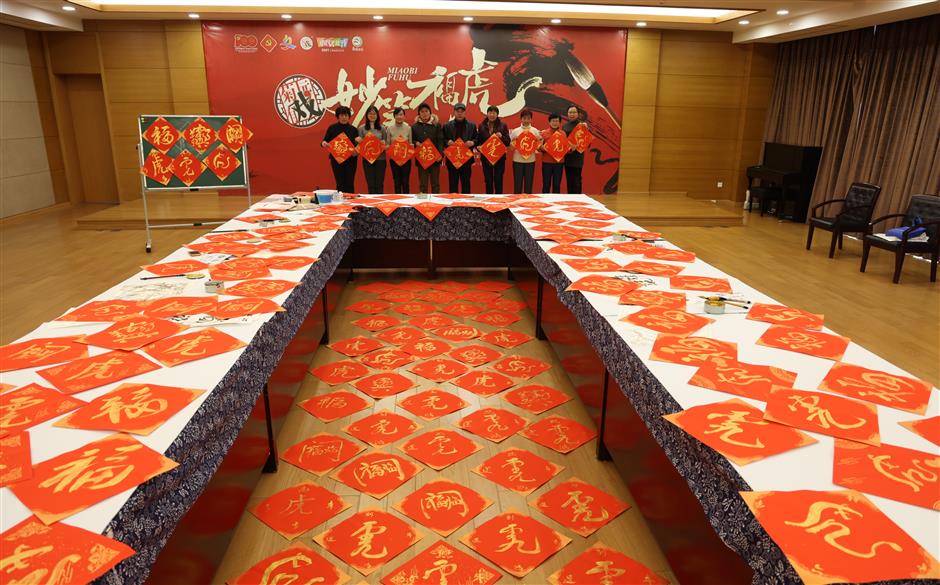 Residents in Juyuan New Area write down the best wishes to celebrate the coming Spring Festival. These blessings will be sent as gifts to residents in the neighborhood.