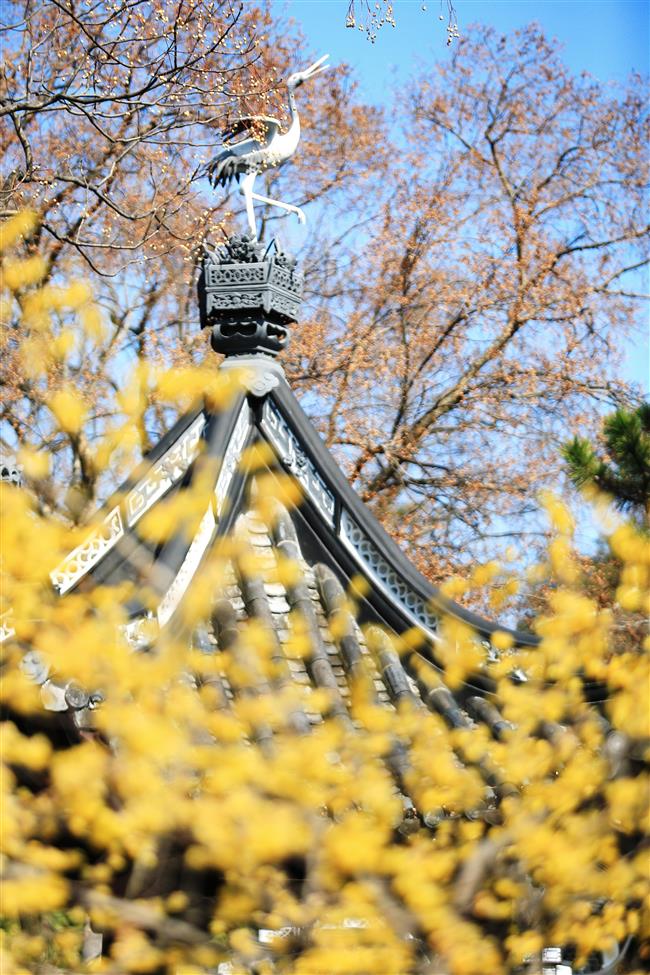 A newly renovated crane stands on top of the Baihe Pavilion in Guyi Garden. The crane was restored via the nisu (clay sculpture) technique, one of the common decoration elements in Jiangnan (regions south of the lower reaches of the Yangtze River) gardens.

To mark the 500th anniversary of Guyi Garden, the "repairing as the old" project on 23 ancient structures has wrapped up. The largest protective repair construction in the past 40 years commenced in October 2020, and the fourth phase of the project was completed ahead of schedule.

Guyi Garden hopes to tell the story of a profound history through the renovated structures. During the Spring Festival holiday, there was a constant stream of visitors.

The project placed different structures in different categories and used various protective measures based on the amount of damage, aiming to minimize human intervention.

As 10 of the 23 buildings were situated within the core protection area of the Ming and Qing Dynasties (1368-1911), the priority was to ensure the safety of these relics.

During construction, the roof and walls were entirely renovated, and waterproof layers were installed to prevent water seepage at Yiye Hall (逸野堂), Nanting Hall (南厅) and Plum Blossom Pavilion (梅花亭). Weiyin Pavilion (微音阁) reopened last year to celebrate the 100th anniversary of the founding of the Communist Party of China. 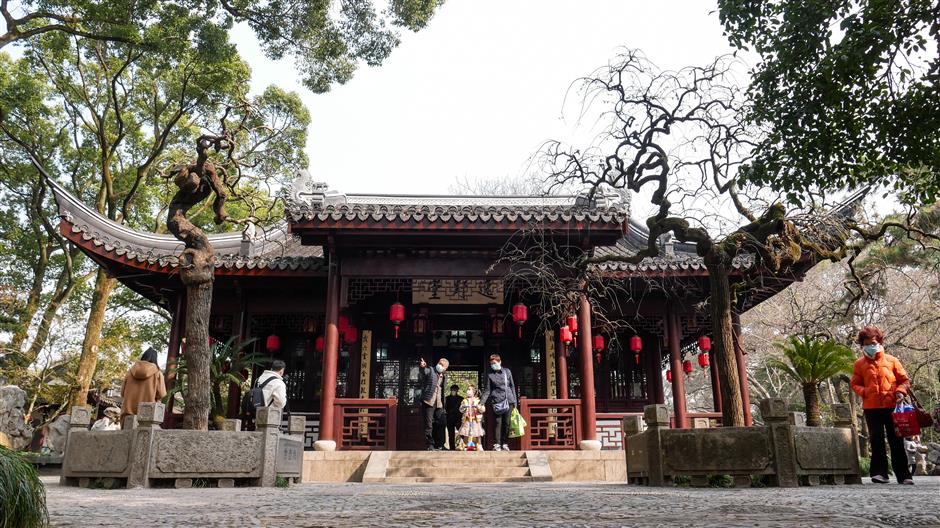 One highlight is Plum Blossom Pavilion. The "Micro ancient architecture, my nostalgic memory" exhibition has attracted many visitors. More than 10 micro models of those located in the original part of Guyi Garden, including Yiye Hall, Flying Eagle and Jumping Fish Hall (鸢飞鱼跃轩), Buxizhou Pavilion (不系舟) and Plum Blossom Pavilion are on display.

Corners on the roofs and handrails with fish hangings are almost the same as the originals. Every window and door is movable and can be opened and closed. Even chi wen (鸱吻), a kind of roof ridge ornament, was made without the slightest error.

Although the models are small they consist of numerous parts. Plum Blossom Pavilion is the most complicated with up to 2,500 parts. 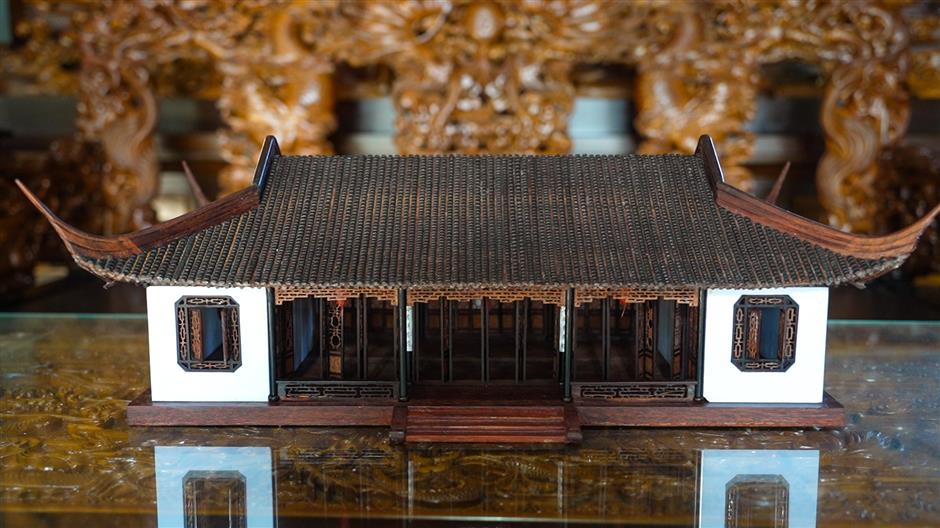 Plum Blossom Pavilion is one of the highlights of the micro-carving exhibition. 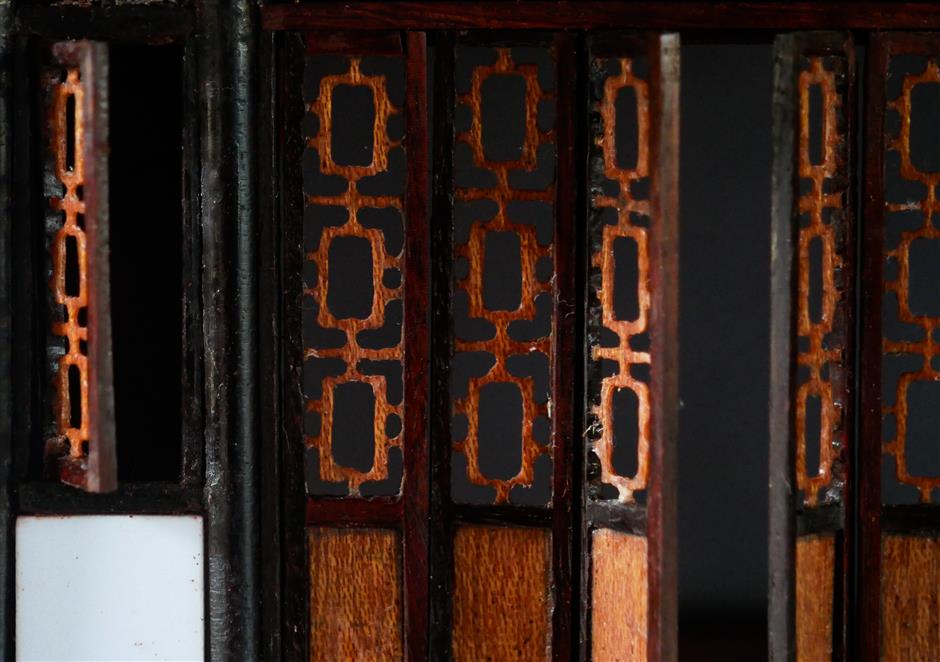 Details on the windows in Plum Blossom Pavilion

These exquisite models are all made by Xu Guanlong, born and raised in Nanxiang Town near Guyi Garden. Before making the models, he would measure the size on site, making the exhibits vivid. Xu believes these models are an inheritance of culture.

The 10 pavilions are among the original structures in Guyi Garden near which he spent his childhood. So he's well versed in each location and the paths connecting them.

"These models look truly the same as the real one," a visitor surnamed Li said. "And the most surprising to me is the flower patterns on the window that were carved on a wooden board only 0.6-milimeter thick. That was awesome!" 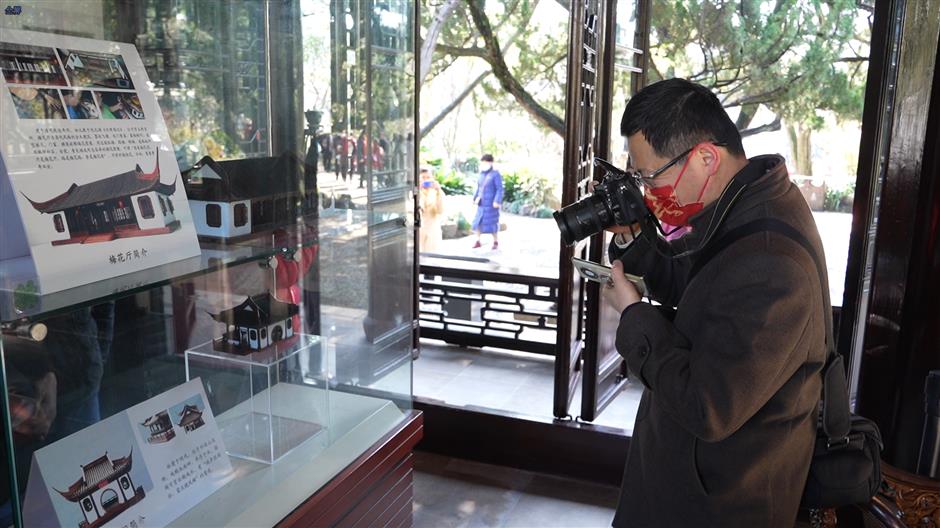 A visitor surnamed Li takes photos of the micro models of pavilions.

In addition, a group of art craftsmen were invited to apply the traditional craft to the 500-year-old Guyi Garden, including those who are engaged in nisu (clay sculptures) and guangqi (a traditional coating that combines tung oil and raw lacquer) crafts.

Nisu is one of the typical decoration elements in Jiangnan (regions south of the lower reaches of the Yangtze River) gardens. Those above the roofs of several halls and pavilions were in bad condition due to a lack of the repair for a long time. As a result, the Guyi Garden invited a non-intangible heritage inheritor to help restore.

The inheritor used wires to make the skeleton and adopted traditional zhijinhui, pulp made from grass or fibrous material, to shape. After four to five days of solidification, he mixed them with white and grey slurry and ink.

Through this way, more than 100 nisu figures, including the crane on the Baihe Pavilion, were restored, while the ancient technique was also promoted. 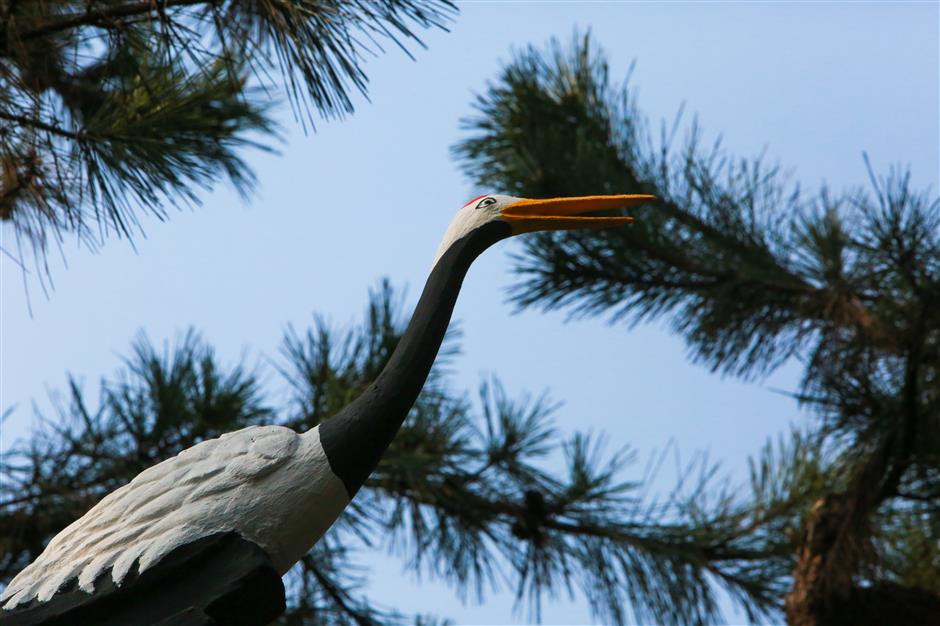 One crane figure was renovated through traditional nisu technique.