The 'supermen' of the roads who keep the city ticking

With the mid-year e-commerce campaign drawing to a close at the end of last month, there sees a surge in online orders to be dealt with by the city's delivery business, which has resumed its operations disrupted by the COVID-19 resurgence in April and May.

However, some residents still complained about logistics and shipping, and the slow delivery of goods.

Below are three delivery guys who worked throughout the lockdown, and the difficulties they faced.

A delivery person surnamed Wu had just received a phone call. "Hello? You cannot find the package? Tell me where you live, and I'll come back and check it."

Since the courier business resumed during the lockdown, packages going missing have become a common problem in every neighborhood.

"I have to pay for them in the end, even though some were taken by mistake by neighbors and some were blown away because they were so light," Wu said.

At first, Wu would call the police for help if the price of the lost one was high. But because many of the packages were the same size, even surveillance cameras couldn't see them clearly. This meant that not all of them could be retrieved.

Also, looking for the lost packages could take a long time, so many couriers would rather pay an indemnity and be done with it.

"Sometimes I spent a couple of hours looking for a package, which is a waste of time and money for people like us," Wu said.

He drives a van instead of a moped or tricycle to make deliveries faster. Now, he can deliver more than 1,000 packages a day.

A missing package will shake the confidence of both new and experienced delivery drivers like Wu. Some new workers quit because they couldn't pay the indemnity.

Another skilled courier, surnamed Qi, who had previously never lost a package, ran into problems this time.

"Instead of delivering packages to people's homes, we put them on shelves at the entrance to each neighborhood. This should be better for us, because it saves us time. But I lost eight of them this month, and there have been a lot of complaints about packages that were damaged by the sun or rain," said Qi. "But things are getting better now."

At a transfer station, vehicles picked up packages from the city's express circulation center one after the other and workers unloaded them after they were cleaned and sanitized.

On scorching days, more than 20 people worked in the 1,000-square-meter warehouse. They wore masks and gloves and used loud machines to sort packages.

Liu, who is in charge of the transfer station, said, "More than 10,000 packages come to our station every day, and all logistics companies are racing against time."

In April and May, when businesses were shut down, more than 40 employees at this station moved into the company as it followed "closed-loop" management.

"It was really hard during that time. Even though our business was suspended, we needed to make sure our employees had food and a place to stay and keep them safe. So, as soon as the delivery business was allowed to start up again, we went back to work right away," Liu said.

Just as the transfer station was getting back to normal after the lockdown, it faced a "big test" in the busy season: the mid-year promotion of e-commerce platforms, which got people excited about shopping online.

What's more, some provinces and cities changed their delivery policies for Shanghai from "unable to deliver" to "delayed delivery," which raised doubts and complaints among the customers.

Faced with the situation, the station made the safety of the express and courier workers its top priority. They cleaned every part of the station, including the areas where people pick up, transfer, sort, and deliver packages.

"Recruiting people is the best way to deal with the express peak; the more the better," Liu said. "However, as the temperature goes up, it gets harder to find new people to join. Not everyone can handle being out in the hot sun for a long time." 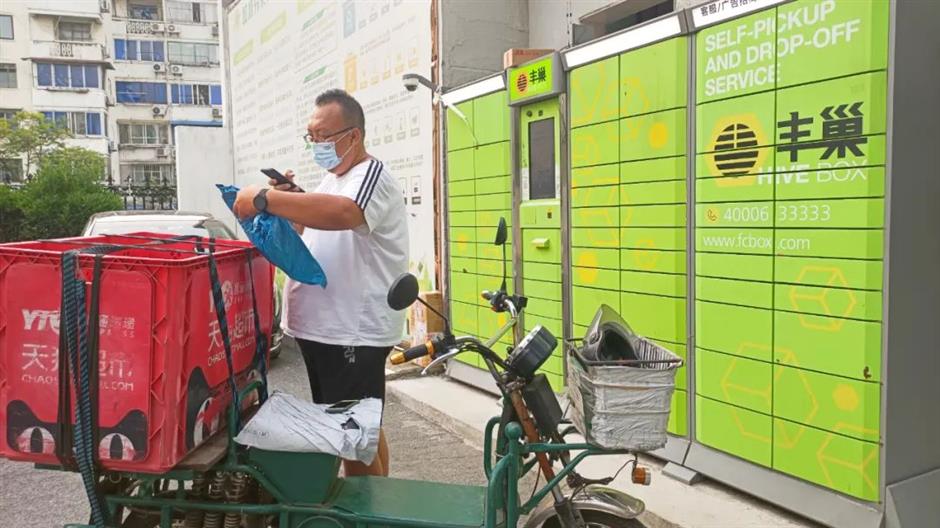 In Jiading Town, Xu Bo runs a Cainiao Post Station that serves three communities and a furniture store. After being closed for almost three months, it looked like nothing had changed.

But six of the store's storage racks were full of packages, and hundreds more that were supposed to be delivered to the door were stacked in the corner.

The 20-square-meter station can handle about 1,200 packages, but there are now about 1,500 packages every day.

"Some people can't pick them up because they don't have time or they're too heavy, so I have to bring them to their door for free, sometimes five or six hundred orders a day," said Xu. "I used to be a courier for four years, and It's like I'm doing that job again."

Even though the station is open from 8:30am to 8:30pm, Xu works from 4am to about 11pm."I thought about hiring more people to help. But money was tight," said Xu.

Even though there are two other women who help people pick up their packages, all of the delivery work is done by Xu. Xu's life has been hard for the past three months because of bills and rent. Even when the station opened again, there was a lot of uncertainty. But it's good that the two staff members didn't leave, which is important to Xu.

"They needed money to live, but they still chose to stay with me to get through this. Because of their hard work, the station runs smoothly," Xu said. "I'll do more manual labor and try my best to make more money and make up for what I lost."

Many couriers remember this "painful but happy" experience as the best example of their job, which is to deal with problems, take advantage of opportunities, and use their full potential.

Since the pandemic started, couriers have been called "the most expected people in the city."

At distribution hubs, they can witness and feel the changes in the industry.

They are also helped by express logistics companies that work hard and move quickly to get through problems.

After surviving the "severe winter," the city's recovery is tied to these running "supermen," and the belief that "Twilight becomes a torch and persistence is gold" will continue to inspire every "runner" who doesn't give up.

﻿
Special Reports
﻿
61763
,
Sharing memories of those wonderful summers past
The taste of summer starts from the healing cafes in Jiading
It's scorching outside, but juicy fruits are worth the effort
The 'supermen' of the roads who keep the city ticking
Pioneering Pudong leads the nation as a model of socialist innovation
Moments of Minhang District in July 2022
Work resumes smoothly on Xinzhuang subcenter
New culture and sports center underway as construction starts
Deals inked on 31 key projects by Minhang District government
One-day tour along Humin Road steeped in development history
EXPLORE SHINE