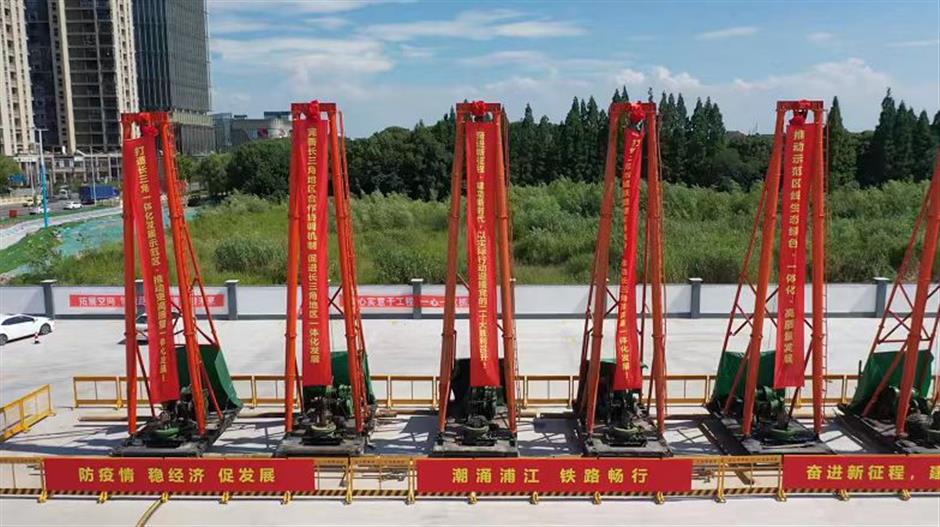 Pile drivers began digging on the site of the future Qingpu New City Station of the Shanghai-Suzhou-Jiashan Intercity Railway on July 13.

Construction started recently on the Shanghai section of a new railway line to better connect Shanghai with Jiangsu and Zhejiang provinces.

Pile drivers began working on the site of the future Qingpu New City Station of the Shanghai-Suzhou-Jiashan Intercity Railway, a key project to fuel the integrated development of the Yangtze River Delta region.

The 49-kilometer Shanghai section of the railway, which will string stops of the Yangtze River Delta Ecology and Greenery Integration Demonstration Zone, runs through Qingpu and Minhang districts.

When completed in 2028, it will be part of a key railway network in the Yangtze River Delta and greatly improve the links between Shanghai and its neighboring cities. This will also enhance the influence of the Hongqiao International Hub and support the development of Qingpu New City.

The Shanghai section of the line is north of the intersection of Yinggang Road E. and the Waiqingsong Highway.

The station will include a vehicle channel on the B1 underground floor, along with the station hall and platform on the B2 and B3 levels.

Passengers can transfer between the intercity railway line and Metro Line 17 at the Qingpu New City Station.

﻿
Special Reports
﻿
62743
,
'Fairy tale' festival lights up the summer nights
UNI Vanke Mall to offer a new shopping, lifestyle experience
Enjoy bucolic summer days in the great outdoors
Construction underway on intercity railway line
Sharing memories of those wonderful summers past
The taste of summer starts from the healing cafes in Jiading
It's scorching outside, but juicy fruits are worth the effort
The 'supermen' of the roads who keep the city ticking
Dine-in services resumed with emphasis on safety
Kunqu Opera kicks off charity season at Poly Grand Theater
EXPLORE SHINE