Businesses bouncing back from virus surge

Minhang District's economy is progressing while ensuring stability. A report made by the district's director, Chen Huawen, pointed out the economy in Minhang in the first half of this year has been severely impacted with an increasing downturn pressure, especially during the COVID-19 resurgence.

However, with the city reopening in June, the economy is continuing to recover. In the first six months of this year, the regional gross domestic product was 122.8 billion yuan (US$17.7 billion) – a year-on-year decrease of 9.7 percent – the slowest decline among the city's suburban districts. 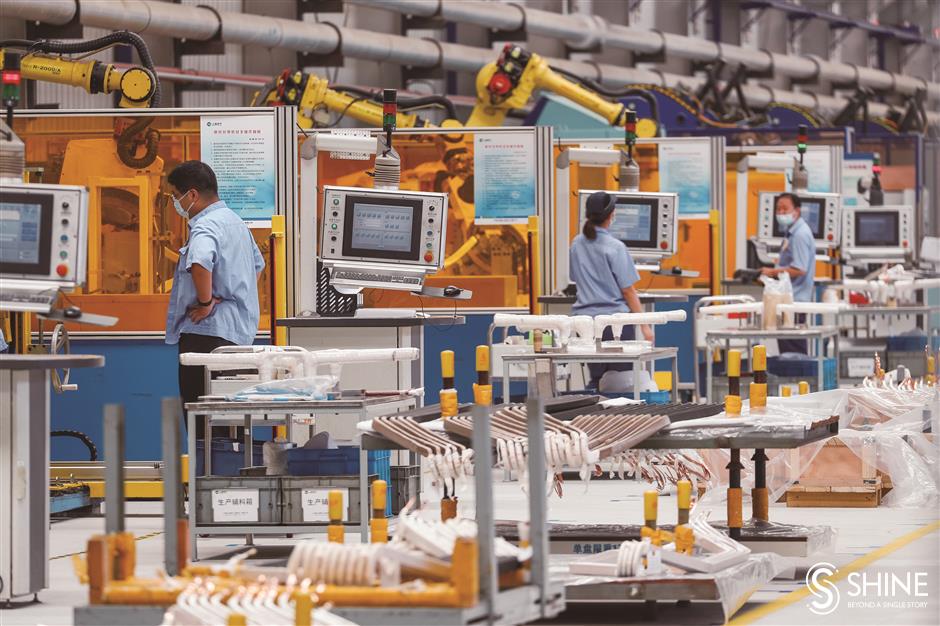 Tax revenue in July achieved a growth of 2.65 percent year on year. Key industries such as rentals and the commercial service industry are rebounding, both with a 1.7 percent increase in taxation in July.

Industrial output value of those companies with annual revenue exceeding 20 million yuan amounted to 176.7 billion yuan in the first half, a year-on-year decrease of 10.2 percent, but it increased by 7.6 percent in June and 13.2 percent in July.

The output value of strategic emerging industries was 93.4 billion yuan between January and June, a decrease of 5.5 percent. However, biomedicine and new-energy vehicles accelerated their growth with year-on-year increases of 7.3 percent and 100 percent, respectively. Revenue for the information software technology service industry was 23.3 billion yuan, an increase of 7.5 percent in the first half of the year.

Domestic demand is returning. Total retail sales reached 99.1 billion yuan in the first half of the year. There were 167 major projects that began this year with overall investment of 55.3 billion yuan.

The total import and export value is expected to be 128.1 billion yuan, a growth of 1.7 percent, which ranks third in the city. Export value was 59.4 billion yuan, up 5 percent over the same period last year.

Minhang is still a top choice for foreign investors, including six new regional headquarters of international enterprises, seven research and development centers, three listed companies and a number of projects under construction, such as the Estee Lauder China Logistics Center and New Hongqiao R&D Center.

There has been an outburst of specialized, startup companies in the first half of the year. It is estimated that new high-tech firms in Minhang will reach 2,800 by the year end, doubled from 2019.

﻿
Special Reports
﻿
61766
,
Businesses bouncing back from virus surge
Minhang-based tech firm looks to make its mark
Moments of Minhang District in September 2022
Anle Village gets its groove back after overcoming pandemic
Celebrating past and future of Zhuanqiao
Downtown transplant promotes smart, carbon-neutral farming in Chongming
From coffee to art to mooncake in the district
Community service staff key to building bridges with authorities
Caojiadu Subdistrict a local version of city's 15-minute life circle
A magnet for foreign investment and talent
EXPLORE SHINE