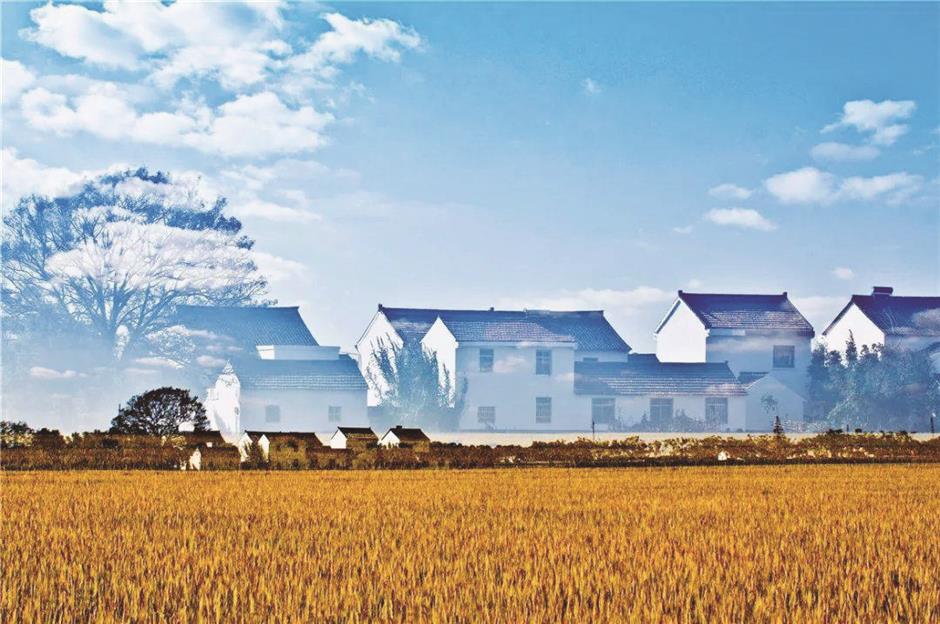 Historic Yexie Town in Songjiang District took its initial shape as a town more than 2,000 years ago. The late Ming Dynasty (1368-1644) painter and calligrapher Dong Qichang (1555-1636) built a Ye Jia Shui Xie garden, or "the Ye Family Waterside Houses," for his maternal grandma who lived in the area, hence the name of the town "Ye Xie."

The town is morphing into an agricultural and cultural tourism place from a traditional farming town, benefiting from the spillovers of the district's G60 High-tech Corridor development as a southeast gate of Songjiang.

The town's cultivated land is about 3,213 hectares, topping Songjiang's towns and subdistricts and accounting for one-fifth of the district's total.

Yexie is a highlight of how rural revitalization in the south of the Huangpu River in Songjiang is faring.

A country version of Disneyland

The town's Oriental Dream Land Theme Park has attracted private capital worth 400 million yuan (US$57.68 million) in its phase-one construction of 670 mu (45 hectares) of land. It is claimed to be a country version of Disneyland. When completed, the park will be an agriculture tourism zone that offers kindergarten services, parents and kids catering and accommodation services, and traditional Chinese culture learning experiences. It will open to the public with a smart robot farm and an animal garden, as well as staging children's plays. It's expected to receive 500,000 tourists each year. 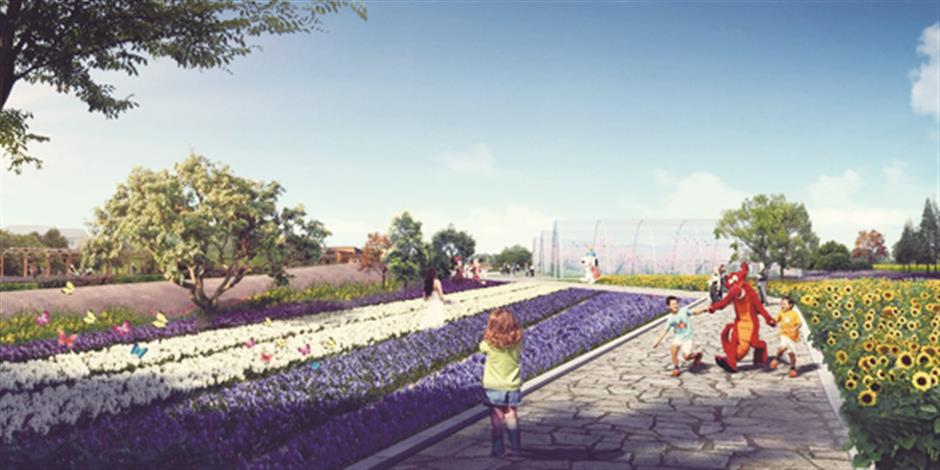 Zhangze area in Yexie Town has an old saying: "A plate of goat meat and a cup of spirits let you feel you were an immortal sitting leisurely on a dock." It's a tradition among Zhangze people – dating back to the Yuan Dynasty (1271-1368) when the Mongolians took control of the country – to eat a plate of nutritious pulpy goat meat during the dog days of summer.

To honor the tradition, a goat meat culture festival was launched in 2009.

During the festival, about 40,000 goats are consumed annually. To alleviate the supply tension, a goat ecological breeding center in the town's Tongjian Village broke ground on June 14.

The center is projected to open in 18 months, with a yearly livestock production of around 5,000. 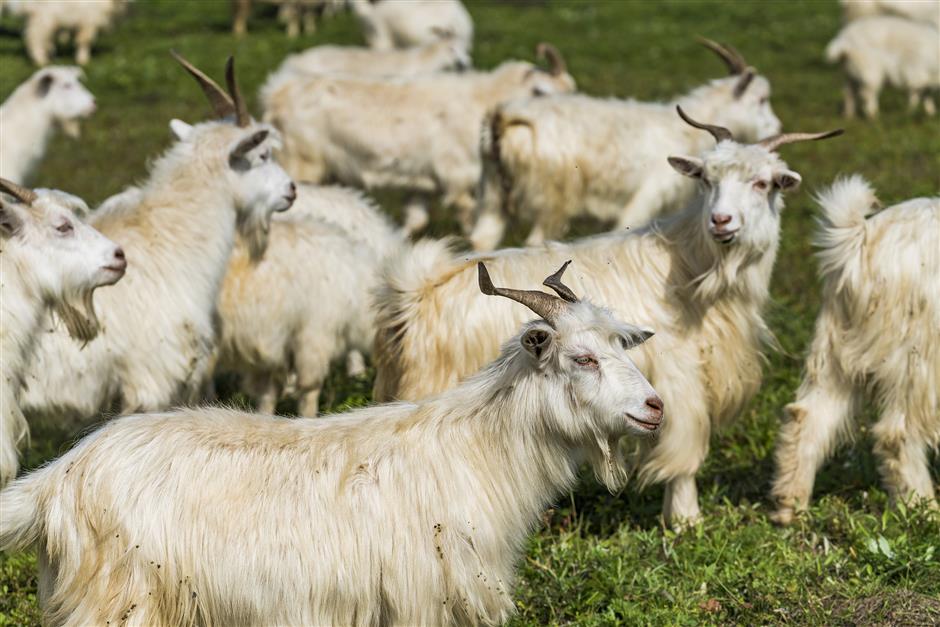 The town also set up cultural venues to promote the heritage items, including an exhibition hall in the town's community cultural center and a 170-square-meter experience center at 141 Zhuting Road. 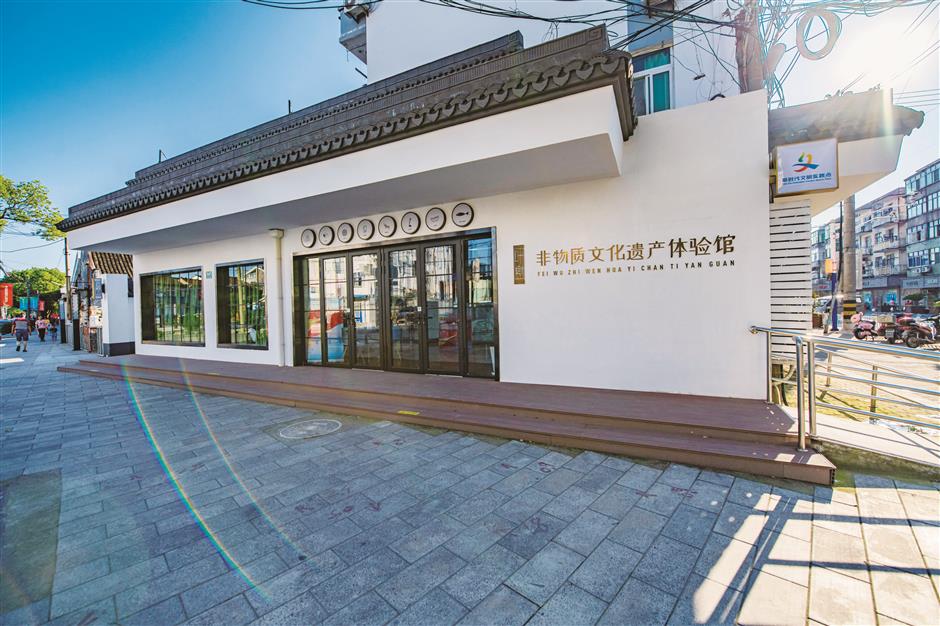 A cultural venue in Yexie Town to promote heritage items

"One, two, three, here we go," as a worker of Ji zhong Hongxiao Film Park gave an order, Chen Bo, a tourist, wearing her kungfu heroine makeup and costume, flew through air. She kicked her legs and waved a sword as if she had entered a magic world of martial arts.

It is the wire stunt experiencing activity newly launched by the film park. Tourists can try the wire stunt and have their performance videotaped by a group of professional videographers.

"The wire stunt is really thrilling, and some cameras were recording me. I feel like I was an actress," said Chen.

For safety, four professionals were manually controlling the wires, and Chen had been insured before she tried the stunt.

The 7,000-square-meter film park, located at 59 Jizhong Road in Yexie, relies on venue rental and film crews' shooting as its major source of income. Starting in 2020, the park launched activities including costume drama role-playing and photography, creative comedy and wire stunts for tourists.

The park has filmed movies promoting filial piety and is considering launching live action role-playing games in its faux-historic settings. 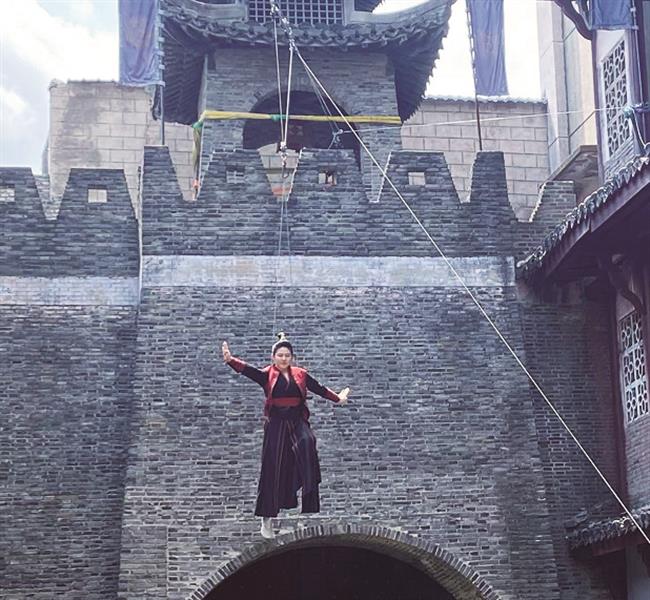 Yexie cakes date back to the Ming Dynasty when hustling merchant exchanges encouraged economic development and the use of different ingredients.

Over many generations, dim sum chefs in Yexie developed unique cakes with a sweet, soft taste and an appealing fragrance. High-quality Songjiang rice is the main ingredient. The rice, after fermenting, undergoes 16 processing steps. The cakes are made through powder sifting, hole digging, fillings, leveling and demolding.

While some traditional dim sum techniques are on the verge of being lost forever, making Yexie cakes has been passed down from generation to generation.

The cakes were listed as Shanghai's intangible cultural heritage in 2011. 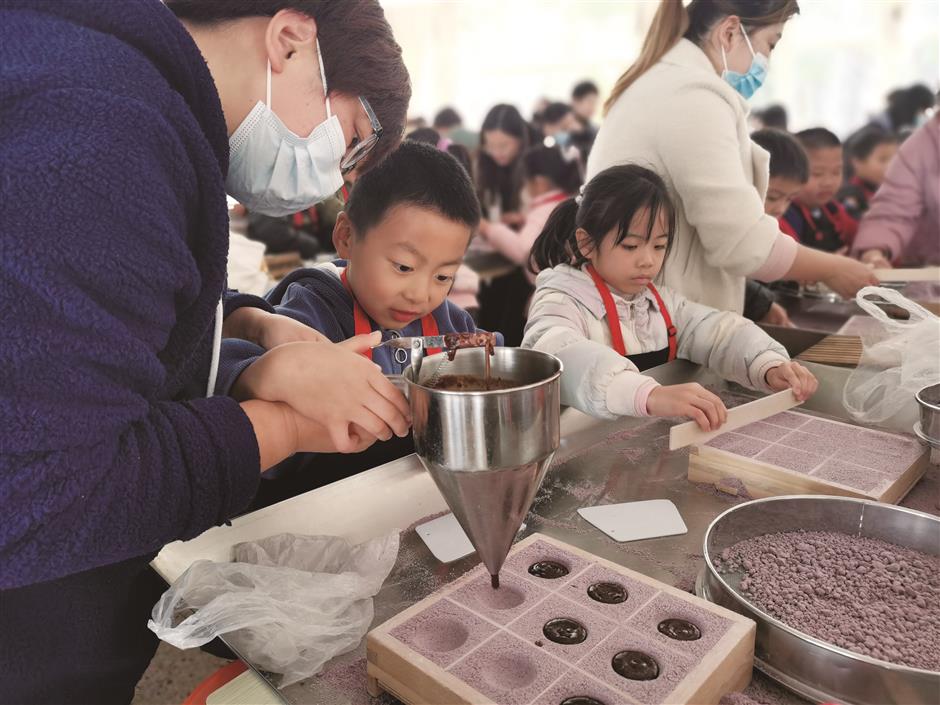 The Happy Elder House in Yexie Town is a care home whose residents are at an average age of 87.

The houses – white-walled units with black-tiled roofs – that make up Happy Elder House are leased from villagers. After a renovation, they were turned into a canteen, bedrooms, offices, an activity room and a broadcasting station.

Recently, villagers set up a leisure space near the Happy Elder House through waste goods reuse. The renovated village houses are decorated with secondhand chairs and tables, and one of the sitting rooms has been converted into a country cafe.

"When dusk falls, villagers gather here to have a cup of tea and chat. They find comfort here," said Jiang Qiuyan, chief of Happy Elder House. "We are thinking about building a happy pastoral complex for the seniors." 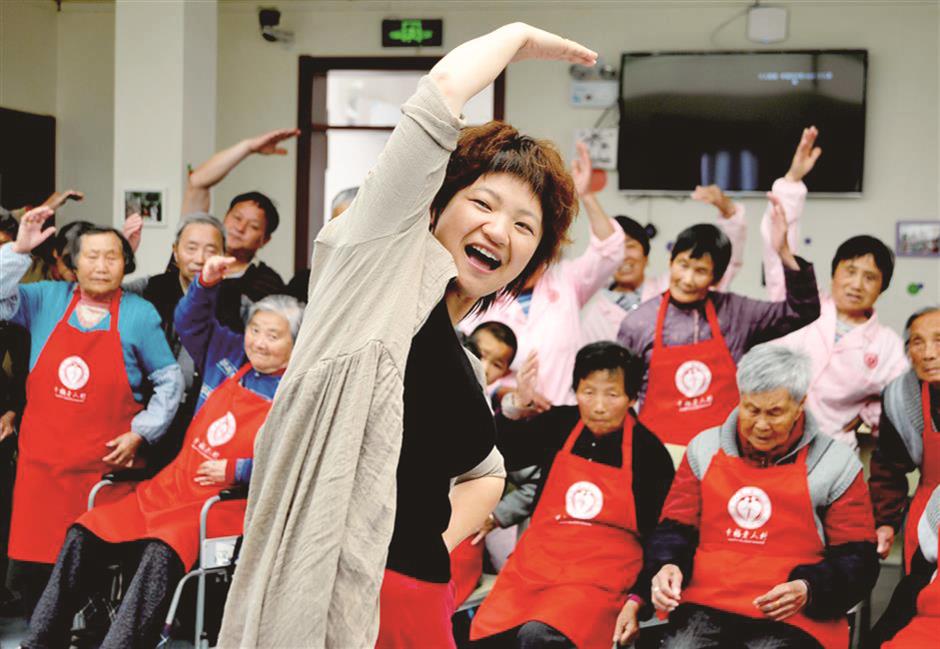 Elders at the Happy Elder House

Relocation a boost to the floral sector

Government officials in Songjiang put forward an "agriculture sectors north-to-south relocation" strategy in 2002, and its floral sector was on this agenda.

Songjiang's earliest batch of flower trading businesses clustered along Jiuxin Highway in Xinqiao Town to the north of the Huangpu River.

As the district rapidly urbanized, the original plot increased its financial potential and was no longer fit for the floral sector. On the flip side, acres of vacant land awaited cultivation to the south of the Huangpu River.

The district then relocated its floral sector to Yexie Town.

The Punan Flower Base, constructed in 2003 and completed in 2005, became a flower distribution center in Songjiang.

A boost to the floral base is ongoing. With a total investment of 2 billion yuan, the floral base will be renovated into a modern flower agriculture park with a 10,000-square-meter glass greenhouse, talent apartments, exhibition halls and canteens. 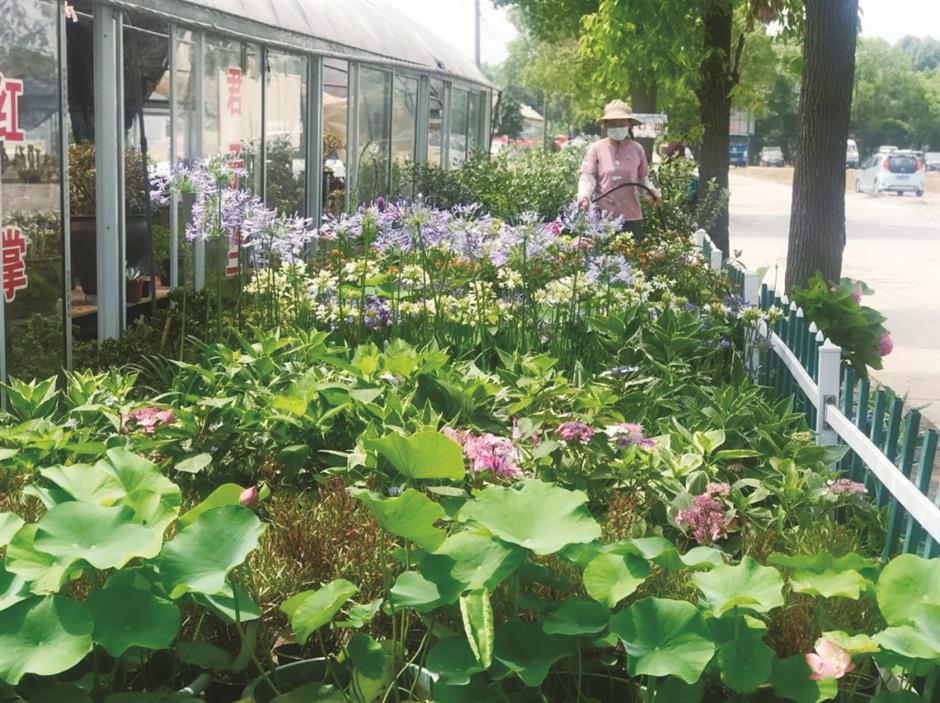 The Chinese water deer science museum in Yexie is built in a conservative forest along the upper reaches of the Huangpu River.

The two-story building consists of four exhibition sections: an introduction to Chinese water deer, their return to Shanghai, factors that threaten them and science about the deer.

Chinese water deer were a widespread local species in the 1880s. Due to habitat reduction and excessive hunting, the species went extinct in Shanghai at the beginning of the 20th century.

In 2006, Shanghai initiated a small species restoration project and reintroduced key wild animals, including Chinese water deer, Yangtze alligators and badgers with the hope of increasing the city's biodiversity.

The Yexie Chinese Water Deer Breeding Center, an ecological conservative forest near the headstream of Shanghai's Huangpu River, is the major habitat for Chinese water deer.

Since the first batch of 40 deer was introduced to the breeding center in 2009, the center now has more than 80 deer and at its peak it boasted nearly 200 such animals. 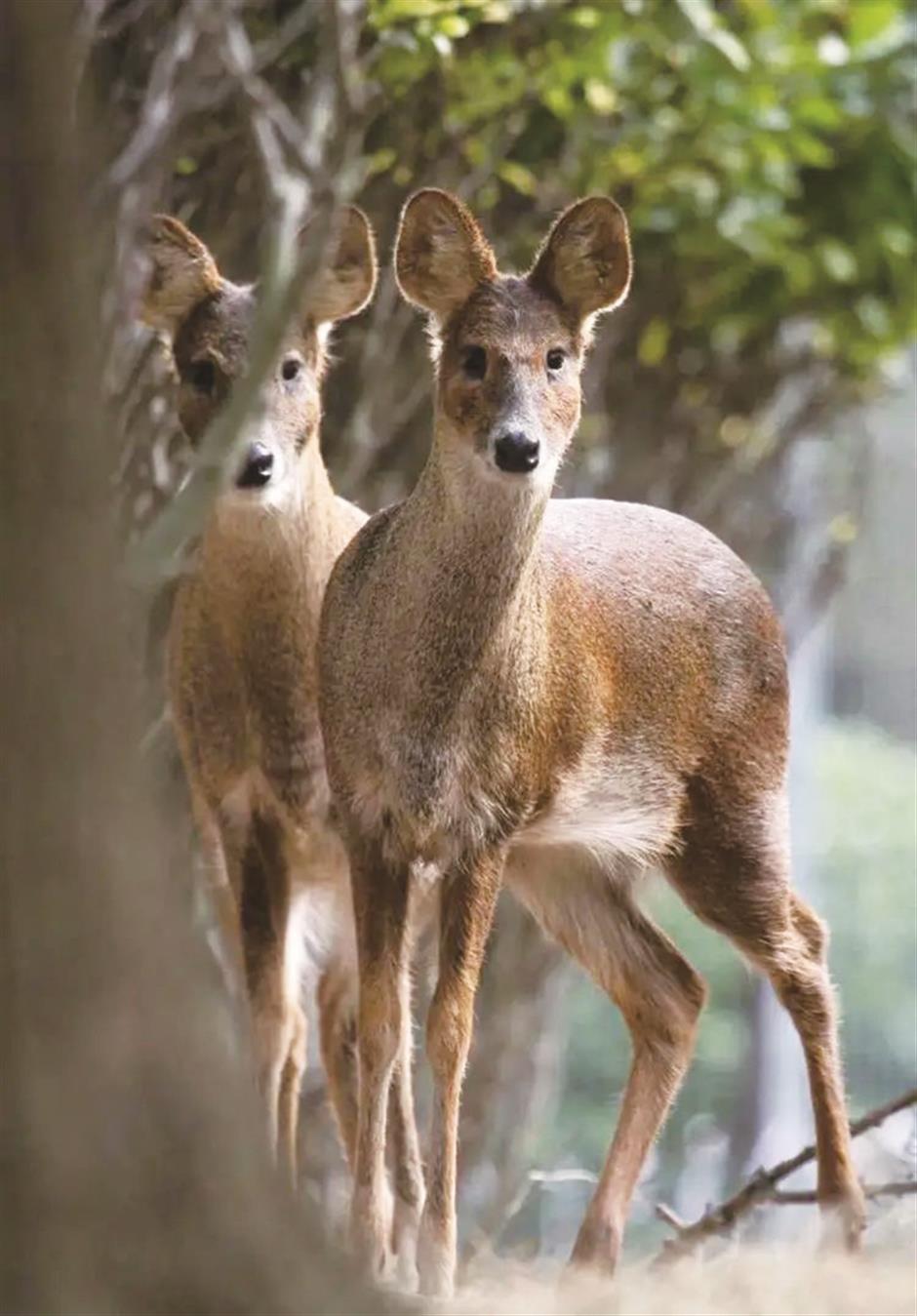 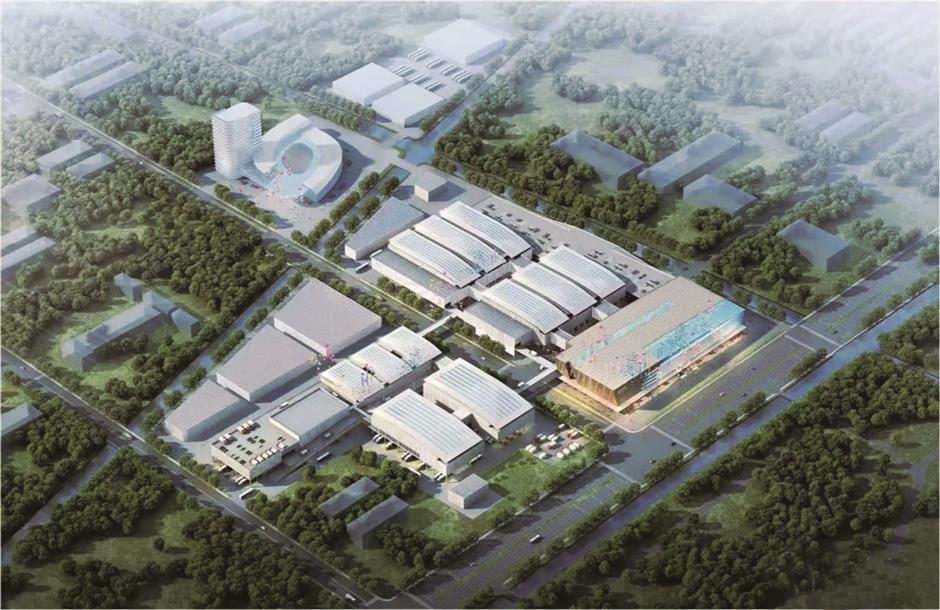