Li, in her 60s, had worked at a factory to make a living, but as she aged, one of her legs developed pathological changes and lost functionality.

Shen, a Minhang native, loves her hair in its drooping, fashionable ringlets. "But I have to cut it whenever it grows longer. I can't style long hair with just one hand," said Shen.

Both Li and Shen are among the nearly 50,000 people with disabilities in Minhang.

Yet the charitable jade-carving courses they have been attending since October 2021 delighted them and helped rebuild their confidence.

Tongxin (One Heart) Craftsman's intangible cultural heritage training course has trained six people with disabilities from the district, in miniature sculpting, jade carving, calligraphy and seal cutting over the past year. Their teacher is Yuan Yao, a national-level Shanghai-style jade-carving intangible cultural inheritor. All walks of the society – philanthropic entrepreneurs, the committee of commerce of Pujiang Town, local government, community centers and local cultural and sports organizations – helped the project run smoothly.

The training course also yielded fruitful results: Two of the jade works – "The Eight Immortals and A Longevity Peach" and "The Happiness of Fish" – with Shen and Li participating as their polisher and cutter, will compete for the 16th China Jade-carving Craftsmanship Award in Chengdu, capital city of China's Sichuan Province, in December.

"We spent the first several months practicing the basic skills. Then we tried our hands at some easy work. Our teacher told us to put our soul into our work. Gradually I built my confidence both in my skill and as a person. I no longer think I'm useless anymore," said Li. 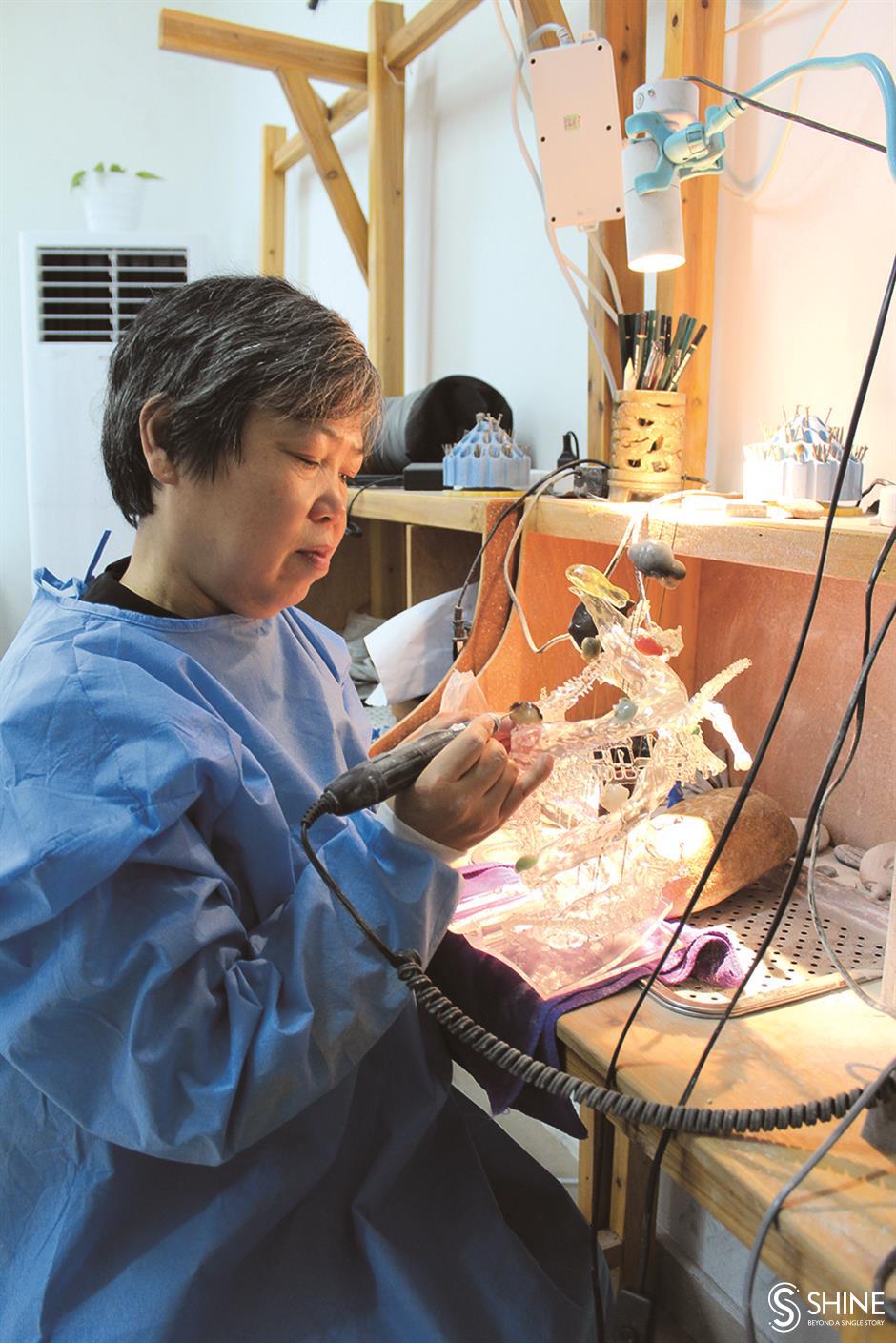 Li Yuzhi works on a jade-carving artwork "The Happiness of Fish."

"I was not able to exert proper strength with my hand. Jade carving requires steady strength from your hands. Master Yuan encouraged me, and gradually my hand stopped quivering and is able to produce neat lines," said Shen. 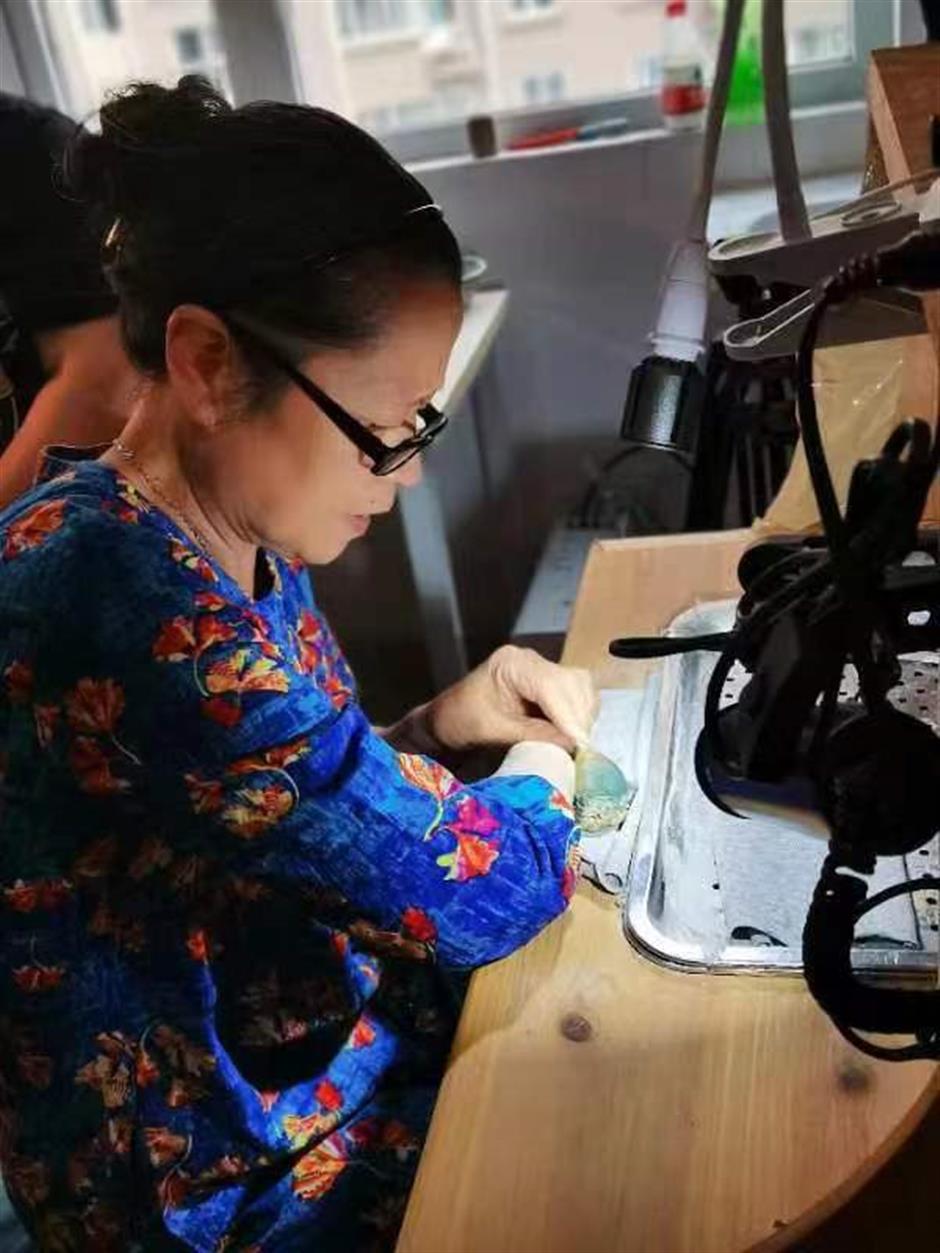 Shen Ping concentrates on polishing a piece of jade work.

The women are now familiar with all the tools necessary for jade carving. The grindstone is used for sharpening any stone bars. The bars have a diverse degree of fineness, and some reach a diameter of 0.5 millimeters or 0.1 millimeters. The large cutting machine in the corner is used for cutting big jade into smaller pieces at first, and a vacuum pipe is used for absorbing dust. A water faucet is constantly dripping water on the jade piece to prevent the knife head of an electric cutter from turning scorching hot. Sometimes a magnifier is used in miniature sculpting.

Yuan, a pioneering master of miniature jade carving, feels delighted about the progress his students have made.

"They've made huge progress. Aunties Li and Shen even managed to do some entry work. We hope the project will continue next year, with more emphasis on detail carving and better promotion of Shanghai-style jade carving. I hope it can benefit more people with disabilities," said Yuan.

Yuan Yao tutors one of his students.

The Shanghai-style jade carving can trace back 5,000-6,000 years to the Liangzhu and Songze cultures in the Neolithic Age.

As Shanghai was forced to open as a treaty port in 1843, it offered fertile soil for the growth of Shanghai-style jade carving.

Factories, harbors, residential areas and commercial blocks were constructed to form a thriving scene of a rising metropolitan city. Jade work from its surrounding areas including Yangzhou and Suzhou were exported through Shanghai to the global market.

Then a large batch of jade craftsmen from Yangzhou and Suzhou poured into Shanghai to make a better living.

They worked as apprentices or opened their own jade shops to offer service for foreigners, merchants and wealthy families.

As lapidaries from the two areas found their niches in Shanghai, while influencing and being influenced by the local jade-carving trade, a new Shanghai-style jade carving appeared with its distinctive and striking look.

It was listed as a national intangible cultural heritage item by the State Council, China's Cabinet, in May 2011.

In October 2017 six Shanghai-style jade-carving works by contemporary masters were collected by the British Museum in London. 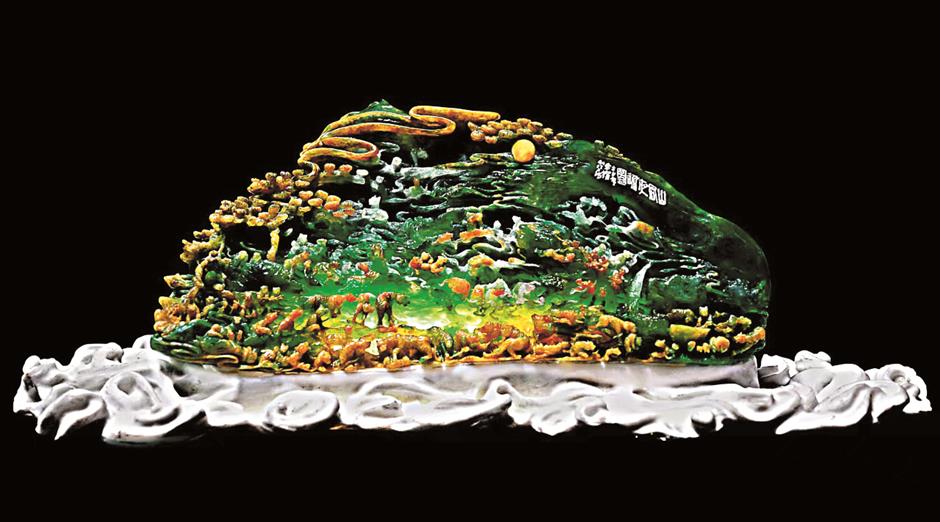