People don’t usually move very fast in Cold War thrillers. Mostly, the only time anyone runs is right before they get shot in the back. Most of the “action” happens in a film cabinet, down a back alley or with a silencer. The classic Cold War tale — which is to say a John le Carre one — is characterized by a deathly stillness: grave faces meeting under gray clouds.

This is not quite so in “Atomic Blonde,” a post-war thriller set in the final moments of the Cold War (1989 Berlin) starring Charlize Theron as the MI6 spy Lorraine Broughton. Broughton is black and blue at the opening of David Leitch’s “Atomic Blonde.” The bruises turn out to be from the story she soon relates. Broughton spends the movie in a testy interrogation with her MI6 boss (Toby Jones) and a CIA chief (John Goodman). The mission she recounts is her dispatching to West Berlin to assist the station chief there, David Percival (a zany James McAvoy), in recovering a missing list with the names of every British asset — something the Russians are keen to obtain. 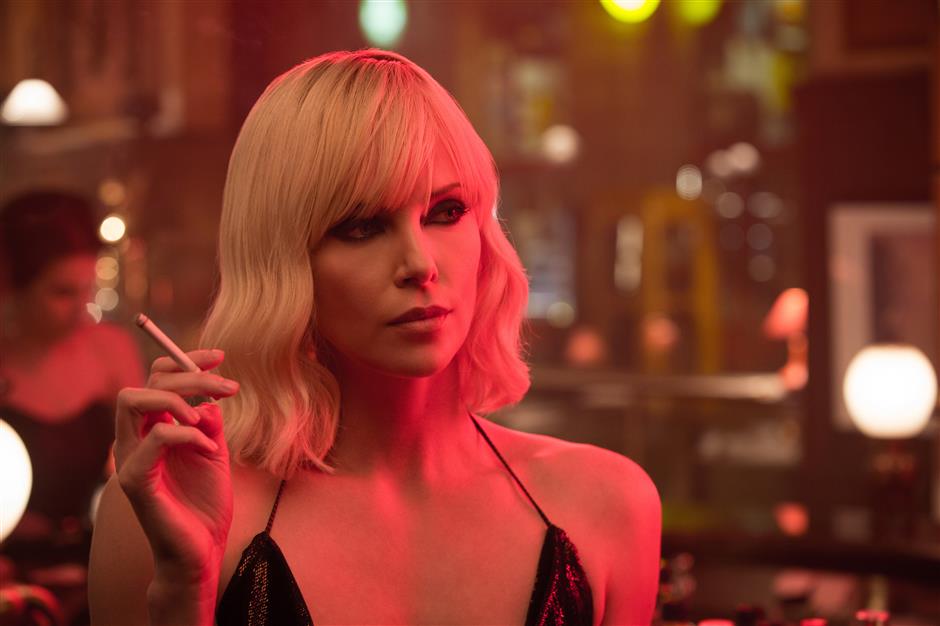 So far, that might sound le Carre-like. But it’s not minutes after being picked up from the airport that Lorraine finds herself jabbing an assailant with her heel, pushing him out of a moving car, and forcing the driver into flipping the car over.

Leitch is a veteran stuntman who co-directed the action hit “John Wick,” in which Keanu Reeves wrecks endless vengeance on those who killed his dog.

The backdrop is more lavish in “Atomic Blonde,” but the hand-to-hand combat is no less primary. Whereas another spy thriller might gradually go deeper into its complex networks of allegiances, “Atomic Blonde,” based on Antony Johnston’s graphic novel “The Coldest City,” stays on the surface, keeps the body count increasing and the 1980s score blaring. The soundtrack combines violence with 1980s pop hits is, to Leitch, an inexhaustible cleverness. So if you want to see someone fatally beaten with a skateboard to the tune of Nena’s “99 Luftballons” this is your film. 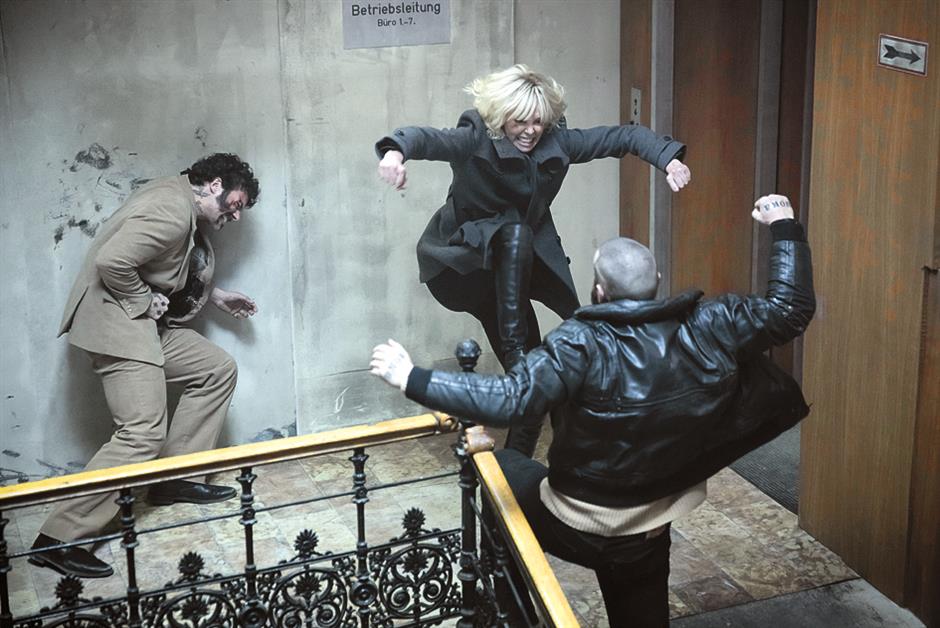 “Atomic Blonde” is largely a vacant, hyper-stylistic romp that trades on the thick Cold War atmosphere of far better films. It’s all dagger, no cloak. But it has two things going for it. One is Leitch’s facility with an action scene. The film gets off to a rough start when a body is sent flying by a ramming car in the kind of blatantly unrealistic CGI fling that ruins movies. But he later goes for a more bravura scene where Broughton takes on a number of assailants on a stairwell that spills into the streets.

It’s easy to see that Leitch is aiming for a more acrobatic version of the famous corridor scene from Park Chan-wook’s “Oldboy.” And there’s no doubt it will have some fans cheering for its audacious seamlessness. But the virtuosity on display is spoiled by its own showoff-y self-awareness. The sequence, a hermetic burst of filmmaking finesse, has nothing to do with the rest of film; it’s just a calling card for a filmmakers’ highlight reel. But the other asset of “Atomic Blonde” is altogether more formidable. Theron doesn’t so much as dominate “Atomic Blonde” as steadily subjugate every other soul in the film into her complete command. Like her more timid le Carre forebearers, there’s no pleasure in her victories. There’s only ruthless survival in a grim game.

She is most definitely atomic, but I’d try to do better than calling her a blonde.