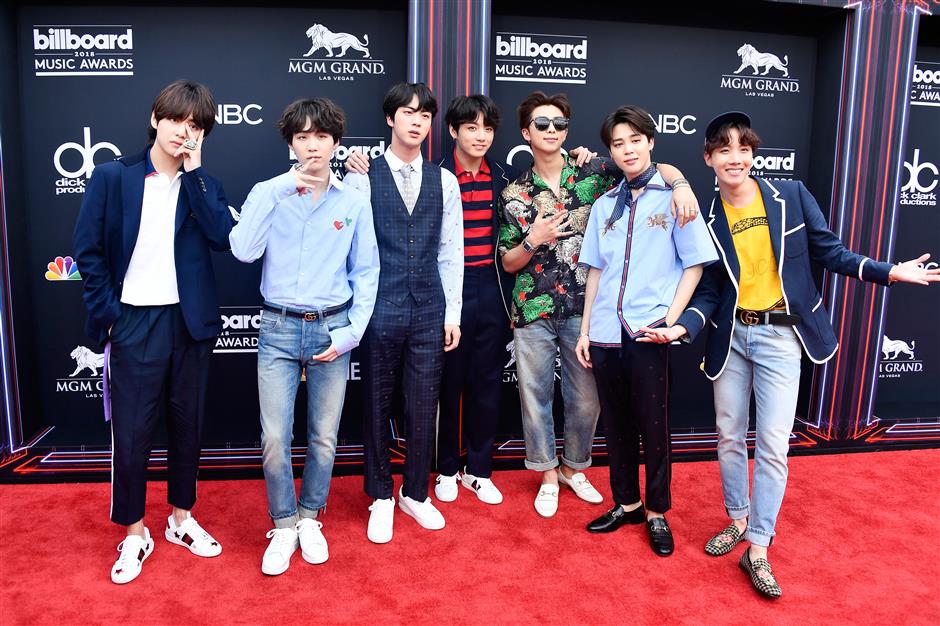 South Korean boyband phenomenon BTS have become the first K-Pop group to rise to the top of the US album charts, a vivid illustration of the genre's growing global appeal.

Known for their boyish good looks, floppy haircuts and meticulously choreographed dance moves, the septet has become one of South Korea's best known and most lucrative musical exports.

On Sunday they passed a new milestone – becoming the first K-Pop group to top the Billboard 200 music charts which ranks albums via sales, downloads and streams.

"It's the first No. 1 for the seven-member group, and the first K-pop album to lead the tally," Billboard wrote in its online report detailing the latest chart ranking.

While plenty of older music listeners in the West might be asking "who?", it is hard to underestimate the popularity of BTS and their seven stars Suga, J-Hope, Rap Monster, Jimin, V, Jungkook and Jin.

According to one data analysis, they were the most talked-about phenomenon on Twitter in 2017, with nearly twice the number of mentions as US President Donald Trump and Justin Bieber combined.

Add in their similarly massive appeal across the globe – they have huge social media followings in Japan, China, Southeast Asia and parts of Latin America – and you have a truly global supergroup.

Their new album "Love Yourself: Tear" toppled "Beerpong and Bentleys" by rising hip-hop star Post Malone, whose facial tattoos are the very antithesis of BTS's wholesome and meticulously manicured image.

While BTS sing in Korean, their style successfully fuses the catchy earworms of K-Pop with hip-hop and rhythm and blues.

Last year their previous release "Love Yourself: Her" became the first K-Pop album to make it into the top 10 US album charts, rising to number seven. It hit the number one spot on iTunes in more than 70 countries.

Hip-hop is nothing new in K-Pop, which traces its roots back to the early 1990s with Seo Taiji and Boys. The trio pioneered the use of rap in Korean pop that changed the industry and struck a chord with a generation coming of age in a newly affluent and newly democratic South Korea.

A multi-billion dollar, intensely competitive market emerged with stars and bands trained in near bootcamp-like conditions, their images tightly controlled by management.

The obsessive nature of K-Pop fan bases became legendary, especially the so-called "sasaeng" or "stalker" fans – mostly teenage girls who have been known to break into their idols' homes.

In the last decade or so K-Pop has won growing legions of non Korean-speaking fans.

BTS is somewhat unusual in that despite its global appeal it is not one of the top bands in South Korea at the moment. It is managed by a comparatively small record label Big Hit Entertainment, a minnow compared to much better known mega-labels like SM Entertainment.

Fans on South Korea's Internet portals were delighted to see a Korean musical export hit the top of the album charts in the world's largest music market.

"All these powerful K-pop agencies tried to break into the American market by making its popular acts sing in English, yet it was the Bangtan (BTS) from a small agency that finally made it to the global market with its Korean-language songs," wrote one anonymous fan.

"Congratulations and thank you so much for representing Korea on this prestigious music chart!" wrote another.