Cloud Theater a hit with audiences near and far

Many plays presented on Cloud Theater via digital methods during the COVID-19 lockdown have turned out to be big hits among online viewers.

Set in Kezhi Garden in Zhujiajiao watertown, the 80-minute outdoor concert was a cross-genre joint venture between Zhang and pop-music producer Peng Cheng livestreamed on websites such as Bilibili and Tencent.

The concert fused electronic music and violin with traditional Kunqu Opera scores, paying tribute to the power of nature and life.

Stunning visual effects were featured with cutting-edge technologies. Nearly 100 high-definition cameras were set up around the stage, providing viewers a panoramic view of the space. 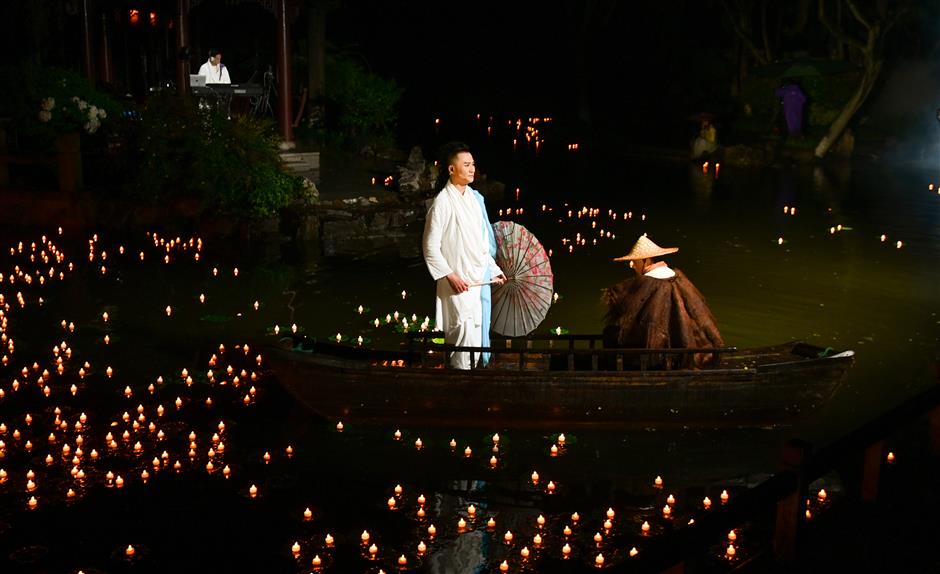 Over the past few months, Zhang has learned that to increase viewership during live broadcasts it’s important to interact and engage with audiences. In his eyes, live Internet performances are quite different from those traditionally staged at theaters.

“For online shows, you don’t keep singing all the time,” Zhang said. “You have to pause to talk and interact with Netizens. You should also be familiar with buzzwords and the lifestyles of the youths.”

Zhang says from now on, creating and broadcasting live performances online will continue as a supplement to theater productions.

Meanwhile, Shanghai Yueju Opera House will livestream a performance tonight at 7pm on video-sharing platforms like the Culture Shanghai Cloud and Douyin.

Well-known Yueju Opera performers Yang Tingna and Zhao Yilan will be accompanied by a Virtual UP — a programed cartoon image that serves as the show’s anchor. Excerpts from classic Yueju Opera performances like “The Butterfly Lovers” and “The West Chamber” will be presented. Performing artists will share behind-the-scenes stories with the audience and help promote certain commodities via live broadcasting.

As of right now, most theaters are still closed to the public. The Cloud Theater, due to its interactivity and flexibility, has enabled more people in China and abroad to experience the art form’s charm.