A musical tribute to deliverymen debuts in Shanghai

A facet of grassroots life in China has been turned into an original Chinese musical that debuted this week in Shanghai to popular public acclaim.

“On the Road,” the opening performance of the 2021 season at SAIC Shanghai Culture Square, is adapted from a popular TV series that chronicles the rise of express delivery services in China.

Performed by the Beijing Performance and Arts Group, the show features some of China’s best musical actors, including Ayanga, who took the lead role of Yao Yuan, a youngster who starts his own grassroots delivery business.

Ayanga, who also had a hand in the musical composition, describes “On the Road” as a “straightforward” work. 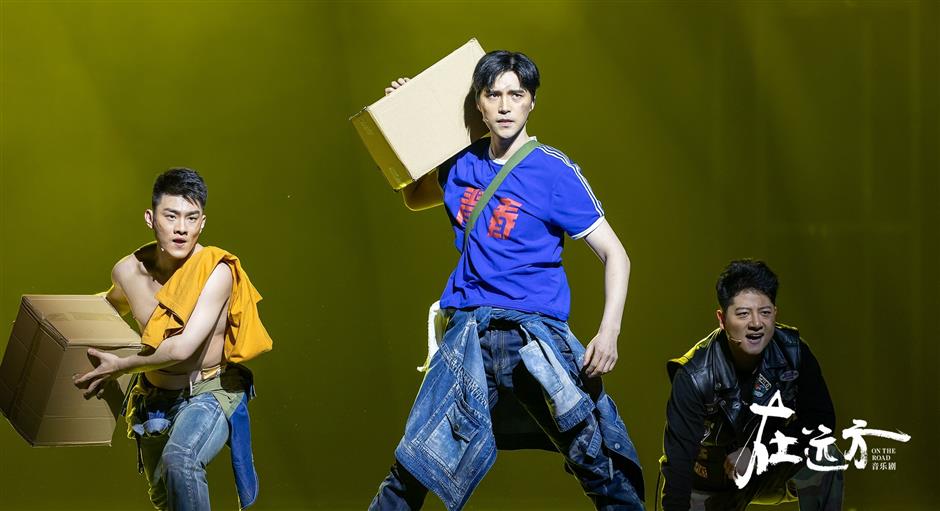 “We didn’t make the lyrics and melodies complicated because this is a story about grassroots people,” he said. “During the composition process, I realized that it’s not easy to narrate in the Chinese language, especially when you are singing.”

He added: “That is something we Chinese musical creators and practitioners have to continue to work on — finding smoother composition patterns for original Chinese musicals.”

Ayanga actually worked for a while as a courier to familiarize himself with his character.

“It’s a tiring, demanding job that requires huge patience,” he said. “Yao Yuan’s unflagging spirit is what our era needs. This production has its practical value, which is to pass the ideas of strength and optimism to audiences. At the same time, I think delivery people need more consideration from society.”

For director Xiao Jie and playwright Shen Jie, who is also the scriptwriter for the TV series, the challenge was how to condense a story that spanned 54 TV episodes into a two-hour stage performance.

The box office receipts suggest they accomplished the feat. It has been a hit in Shanghai as it was on its previous stop in Beijing.

“We are still improving the production from audience feedback,” said Xiao. “We can assure audiences that what they see is worthy of the ticket price.”

﻿
Special Reports
ADVERTISEMENT
A musical tribute to deliverymen debuts in Shanghai
Performing arts focus on children in new season of stage productions
Classic literature text gets Kunqu Opera makeover
Take a musical ride on the 'Express Romance'
What to talk about stranded on a Pacific island?
A slew of TV shows to light up the holiday weekend
Actress Tian's performance stuns Macau judges
Origin and future: Chinese stars rise as coronavirus keeps foreigners out
Tribute to doctors on pandemic front line
A bevy of fun available in Jiading District
EXPLORE SHINE