Moving percussion beyond its stereotype

Percussion music is much more than creating intense, rhythmic sound waves. It can be soft, emotional, and most importantly, creative.

Percussionist Yu Le wants to convey that idea to audiences, especially those who only think of percussion as drums and gongs. In fact, there are scores of orchestra instruments classified in the percussion family, including the piano, drums, cymbals, marimba, tambourine, celesta, chimes and triangle.

Apart from a set of drums, Yu brought a marimba, a vibraphone, the piano, bar chimes and a waterphone to the stage. The program ranged from traditional and electronic music to tango and even rap. 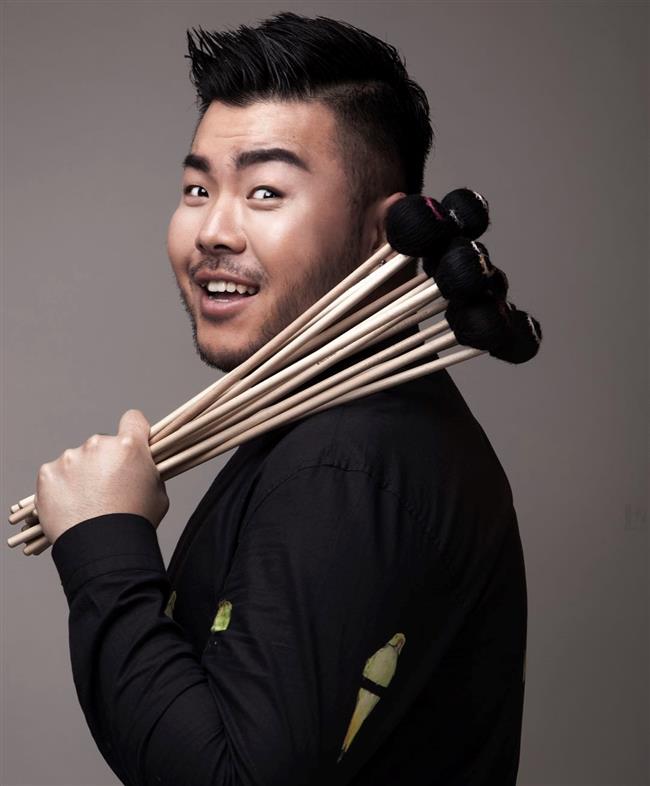 “I want to break the stereotype of percussion music for audiences,” Yu told Shanghai Daily. “The drum is just one facet. I want to showcase the color and richness of more percussion instruments in the programs.”

The opening piece, entitled “Darkness to Light,” started with Yu playing a waterphone — an instrument known for creating ethereal sounds often heard in movie soundtracks. He then played on a set of drums, standing instead of sitting as drummers usually do. He was accompanied by Liu on the piano.

After an atmospheric first half, the second half of the program was lighter and brighter, with Yu switching from drums to vibraphone.

In the piece “Everybody Talk about What” — composed by another musical friend, Julie Spencer — Yu played the marimba, while rapping in both English and Chinese. 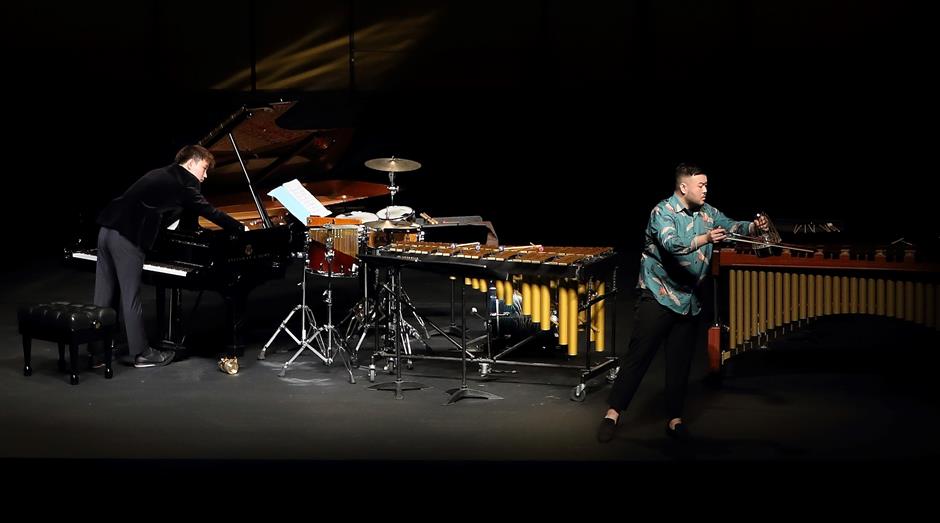 “Darkness to Light” started with Yu playing a waterphone.

“Innovation is greatly valued by percussionists,” said Yu. “New performing styles and crossover exploration have been emerging in the past three decades. Percussionists are lucky to be born in this era.”

He said he thinks percussion music is winning more public attention, particularly from a younger generation tuned in to fast-changing pop culture.

“The fast and flowing pace of percussion instruments fits the modern era,” he said. “Modern percussion composers have created a lot of avant-garde works, which are attractive to the young in terms of both content and playing methods.”

Interactive sessions are always included in Yu’s recitals. During the Shanghai concert, he and Liu led audiences in a clapping routine to demonstrate how two different rhythmic patterns eventually merge into one.

“I always want each attendee at one of my concerts to become a part of the performance instead of just watching and listening,” said Yu. “Rhythm lies in everyone’s body.” 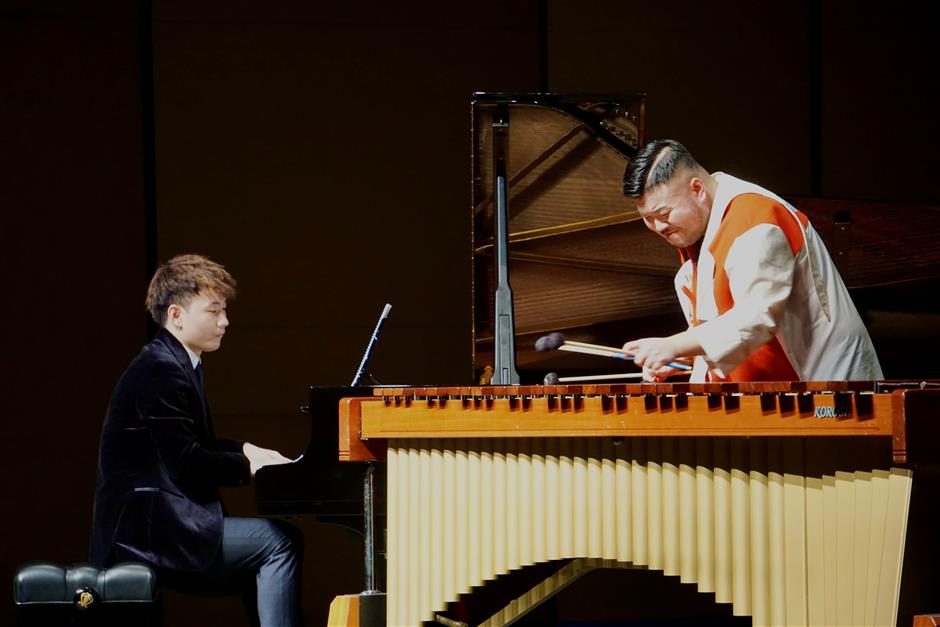 The Shanghai concert ended with Piazzolla’s “Libertango,” which was adapted into a concerto for marimba and piano.

Yu started learning percussion at age of 14, when he saw two children playing a set of drums on TV in 2000.

“Their performance was so cool that I was immediately taken by drums and asked my parents to buy me a set,” said Yu. “After one year of learning, I asked my parents whether percussion was only about drums. My father, a vocalist, then introduced me to Liu Yaguang, a professor at the Xi’an Conservatory of Music High School. He broadened my vision of the percussion world.”

As a chamber musician and concerto soloist, he has performed with troupes like the National Symphony Orchestra of Mexico, the Beijing Symphony Orchestra and the Manchester Camerata. The 35-year-old is now the deputy director of percussion at Royal Northern College of Music.

Abe, who is now 84, has been a primary contributor in the development of marimba in terms of both technique and repertoire. With the Yamaha Corp, she developed the modern five-octave concert marimba. 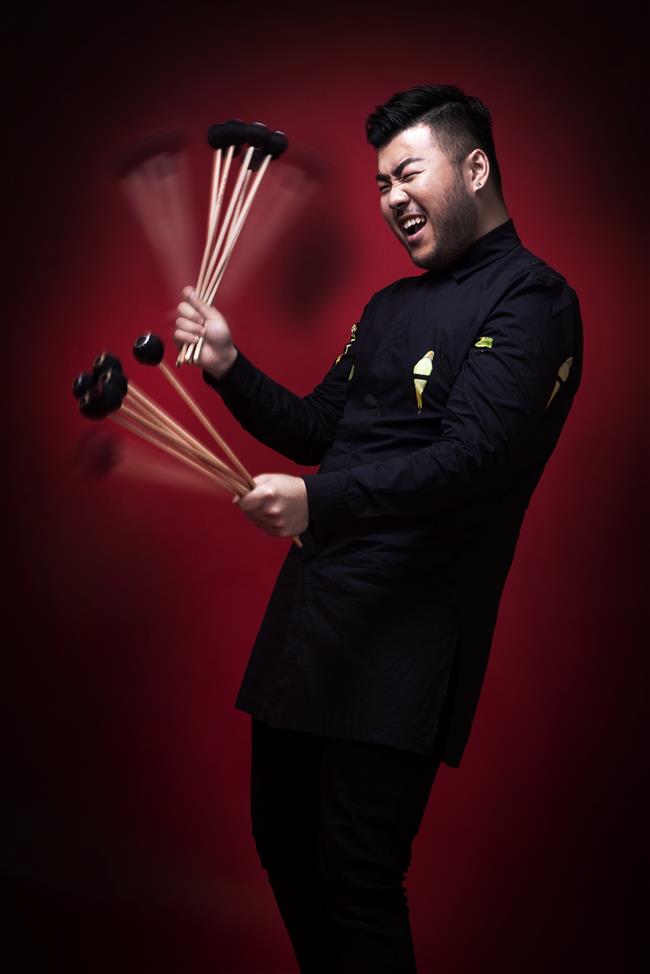 Yu is one of China’s most promising young percussionists.

Yu’s other mentor Glennie has been his idol since childhood. Deaf since the age of 12, she was the first Western percussion soloist. She regularly plays barefoot to, as she puts it, feel the music better.

“Glennie is a master in using space and creating a sound field to involve audiences,” Yu said. “She can’t hear the music, but she feels it with her body. She thinks musicians should make audiences ‘feel’ music instead of just hearing it.”

“The Grand Theater has a big hall, so I need thicker sticks to create a better sound and more dynamic movements when playing on the stage,” said Yu.

Among all percussion instruments, Yu favors the marimba.

“It has melody, and therefore has mood,” said Yu. “The marimba is like a changeable child. It can be cute and lovely, but also harsh and intractable — just like me.”

He added: “It’s a pity that the marimba was born late and missed the era of great composers like Bach, Beethoven and Brahms. There haven’t been many classical works composed for marimba. But to play Bach’s works with the marimba is every percussionist’s desire.”