The final of a televised dialect competition for the Yangtze River Delta region will air on local City Channel and BesTV at 7pm on December 17, with an aim to display the distinctive charms and development of regional dialects.

Hostess Yu, a native of Changzhou, Jiangsu Province, had three-year experience as a talk show actress. She will perform the pop song "The Wind Blows" in Changzhou dialect.

Shen from Shanghai will give a new interpretation of Teresa Teng's hit song "Sweet Honey" in Suzhou and Anhui dialects. Zhao, who hails from Jiangsu's Nantong, will dub a classic excerpt from the film "A Chinese Odyssey" in Nantong dialect, and Ruan will sing "Shanghai Ballad," a Shanghainese song. 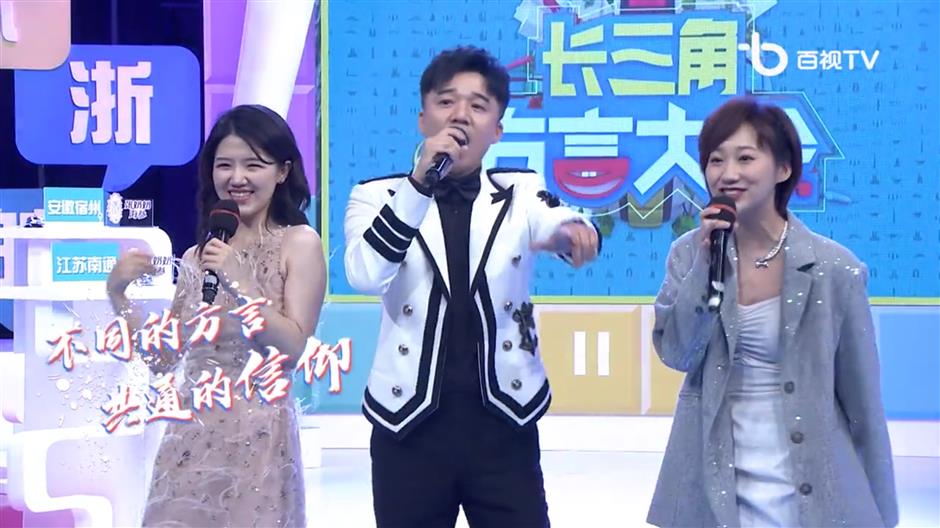 The competition has also attracted many young contestants, eager to preserve the different dialects, customs and cultures of the Yangtze River Delta region.

Since October, they have received rounds of tests and participated in various quiz shows and games in different dialects. Linguists and other experts have been invited to comment on their performances and introduce the historical origin, development and charm of 10 or so dialects in the region.

Ah Qing, one of the finalists and a native of Shanghai's Jinshan District, said it's unfortunate that fewer and fewer young people around him can speak the authentic Jinshan dialect. He and his friends have visited many local people between the ages of 90 and 100 to record the way they speak it.

"These sound clips will help preserve the dialect," said the 30-something company worker.

Federico Demarco (Chinese name Wu Feide), an Argentine businessman and friend of Ah Qing, is a Shanghainese enthusiast whose wife is a Shanghai native.

Demarco, 30, has spent many hours learning Shanghainese, which has helped his relationship with his in-laws and made it easier to make friends in the city. He and his friends have created a website dedicated to the pronunciation and development of several kinds of regional dialects, including Shanghainese and dialects from Suzhou, Wenzhou and Taizhou.

People who are interested in the dialects of Yangtze River Delta region can apply through fangyan2021@sina.com for the recording of the second season.