Museum a paradise for former director

Chen Xiejun was happy to meet with Shanghai Daily to discuss his extraordinary 15-year career at Shanghai Museum. But before the now-retired director sat down to talk, he visited the museum shop and bought several art books.

“A museum is a cultural paradise, a peaceful homeland and a big platform,” said Chen, who joined the museum in 1999. “People of all ages visit this place with a pious desire to learn about Chinese civilization. I think museums are living history, and they have a calming effect in this fast-paced, fickle digital age.”

Over the years, in addition to his duties as museum director, he also served as Party secretary for the city’s culture, radio broadcasting, film and television, and deputy director of the cultural heritage administration. 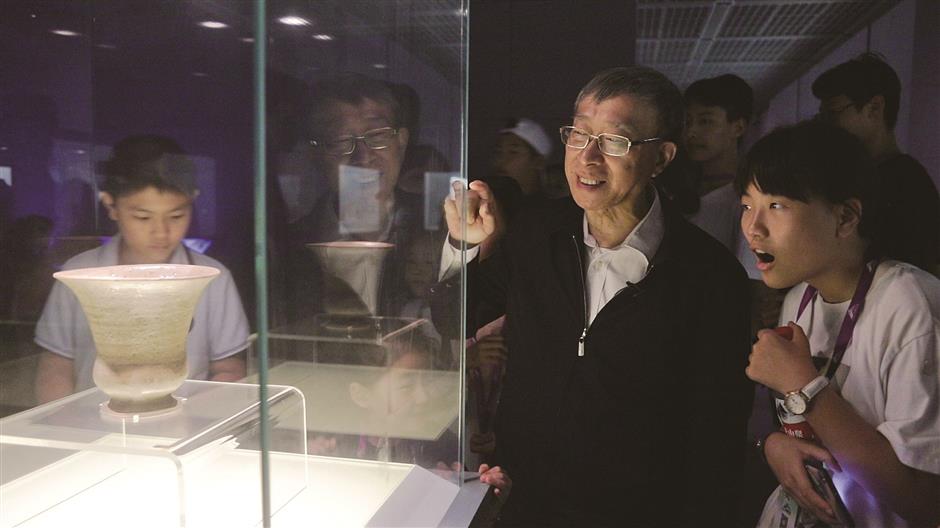 An engineering graduate and former staffer at the Shanghai Academy of Social Sciences, Chen’s positions changed over time, but he always remained a scholar — humble, diligent and versatile.

Visitors began queuing for the exhibition in the wee hours of the morning, waiting in freezing winter weather to make sure they didn’t miss the opportunity to look at the national treasures.

“I was deeply touched by the scene,” said Chen. “The museum normally opens at nine in the morning, but we decided to open earlier. Queuing up actually provided time for visitors to clear their minds and adjust to what they were going to see.”

Founded in 1952, the museum boasts a collection of a million artifacts, of which about 140,000 are precious relics. The abundance and quality of the collection has won the museum world renown.

“Shanghai Museum is the fruit of the founding of the People’s Republic of China,” said Chen. “It experienced three main stages of development.” 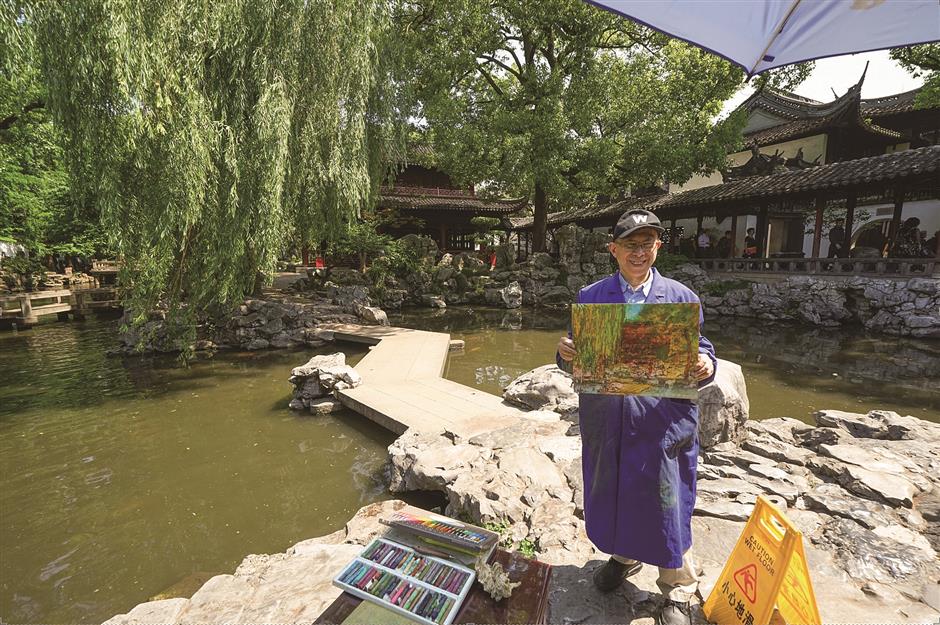 Chen displays one of his paintings of Yuyuan Garden.

The first spans its establishment to the Third Plenary Session of the 11th Central Committee of the Communist Party of China in 1978 — an historic meeting that paved the way for China’s reform and opening-up policies. During the period, Shanghai Museum was constantly building its collection and improving its management system.

The second phase lasted into the mid-1990s, when the country was undergoing rapid transformation. And the third phase began with the inauguration of the museum’s current site at People’s Square in 1996.

“The first stage went from zero to one, the second one witnessed the modernization of the museum, and the third dwelled in a period of prosperity,” Chen said.

Over the past two decades, Shanghai Museum has held a number of sensational exhibitions, including one showcasing ancient Egyptian treasures from the British Museum in 1999, the China-Japan calligraphy exhibition in 2006 and the masterpieces of ancient Chinese painting and calligraphy in American collections in 2012. The exhibitions were the fruitful outcomes of cultural exchanges between the museum and foreign institutions.

The museum is no dusty old fossil. It has kept pace with the modern age by digitalizing its collection and developing creative new ways to present the past to contemporary audiences.

“During the third period, we evolved from the idea of merely preserving donated artifacts to treating the collectors well,” said Chen. “It reflects the people-oriented concept of Shanghai Museum.”

It was a pioneer in free admissions in China.

“Shanghai Museum plays a significant role as a window to Chinese culture,” said Chen. “The museum is situated at People’s Square, the very center of the city, and is surrounded by many other cultural spaces.”

Research is a fundamental objective of the museum, along with collecting, preserving, displaying and interpreting. Stepping outside, archeological teams from the museum continue to explore the history of the city.

“The various museums in the city are excellent books for children and later generations,” said Chen. “The museums have a profound impact.”

The former Shanghai Museum director was engaged as a consultant and chief planner for the World Expo 2010 Shanghai, taking charge of the building of the Urban Footprints Pavilion and the World Expo Museum.

“I cried three times during the Expo,” said Chen. “At my age, people rarely cry. However, I had a special bond with the Expo. I worked on the event for nine and a half years.”

The first time he cried was at the Expo opening ceremony, when he was doing commentary on the event for Phoenix Television. The second time occurred on October 16, 2010, when the Expo set a single-day record of more than 1.03 million visitors. And the third tears came when the Expo ended on October 31.

“I think of the Expo as a dream,” said Chen. “To realize a dream requires nationwide efforts.”

The versatile scholar still enjoys painting. He records the development of the city on canvas. He said he has been drawing Chongming Island, Jin Mao Tower and Yuyuan Garden since 1999.

“Twenty years ago, after finishing a day’s work, I went to Jin Mao Tower to draw from nine or 10 in the evening to three or four in the morning,” said Chen. “All the paintings were donated to the Jin Mao Tower for its official opening in 1999.”

In 2002, Shanghai Art Museum organized an exhibition showcasing Chen’s 256 paintings of Chongming Island. He continues to capture the beauty of the island in preparation for the 10th China Flower Expo to be held there in 2021.

“Through my experiences over the last 20 years, I realize that only by integrating one’s personal life into the development of a city or a country can we truly find spiritual pleasure,” said Chen.