When West meets East: an Australian's 22 years in Hong Kong

Before his first tour to Hong Kong back in 1995, Daniel Szuc had no plan to revisit the place. A couple of years later, however, he not only came back but also got married and settled down in this Asian metropolis more than 7,000 kilometers away from his hometown in Australia.

Having lived in Hong Kong for 22 years, Szuc has found his element in a life of cultural infusion and aims to use his unique advantages to connect people from the East and the West.

"My first impression of Hong Kong was like electricity, energy and a sparkle ... and high possibility," Szuc said, recalling his first Hong Kong trip. He immediately realized that the place could be a perfect arena for young people like him to stretch their wings.

Hong Kong offers a precious opportunity to do business, meet people of different cultures and understand more about the Chinese mainland, he said. "That diversity and opportunity just weren't always as equal or available in Australia."

In 1999, Szuc moved to Hong Kong and has worked and lived here since then.

Over the past two decades, he set up a consulting and training platform Make Meaningful Work as a co-founder and got married with a Hong Kong woman, who was his college classmate in Melbourne.

Having already seen Hong Kong as his home, Szuc was saddened by the rampant destruction during the social unrest in 2019 and was glad to see that the national security law had restored peace and order in the city.

"You could almost feel on the day it (the law) was implemented that there was a sense of calm and restoration brought back to the city ... and it (Hong Kong) has become more peaceful," he said.

Szuc said it was a huge relief for him to know that "people can get on and enjoy their lives again in Hong Kong." 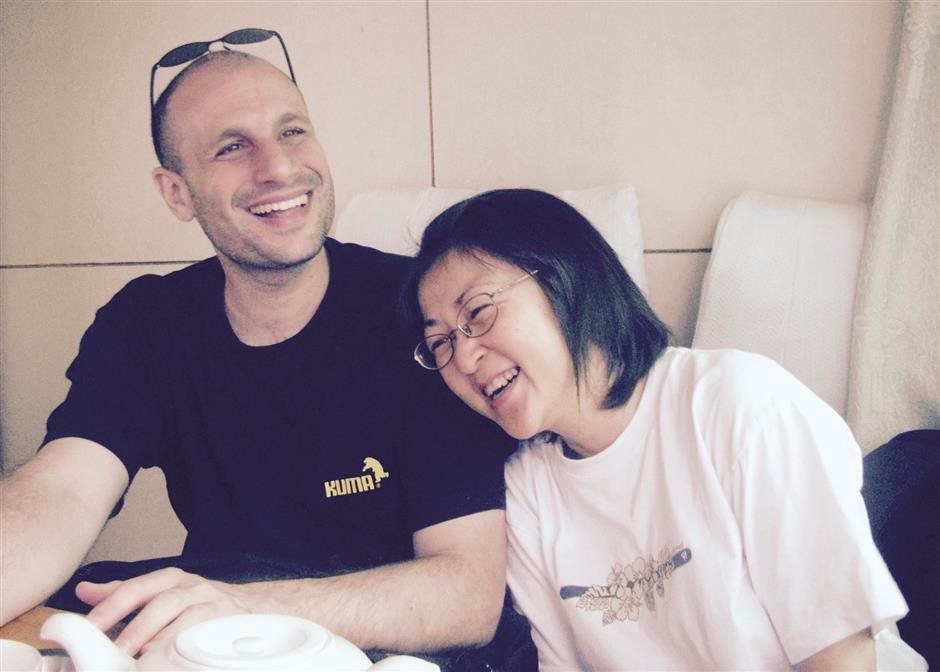 Daniel Szuc and his wife Josephine Wong share a laughter.

Szuc's wife played a vital role in helping him blend into the life of Hong Kong and understand the Chinese traditions.

Although the couple has different cultural backgrounds, they have managed to avoid cultural friction and build a fantastic relationship. Szuc believes the secret lies in mutual respect.

"We have enormous respect for each other's cultural heritage and we are both continuous learners open to improvement," he said.

Szuc still remembers the bitter taste of the Chinese herbal medicine when he tried it for the first time.

"But I was well aware of the sustainable benefits in the short and longer term," he said. "To understand another culture, you have to be willing and open to try things you've never tried before."

He has become accustomed to taking herbal broth and intrigued by the spirit of Chinese healing. "The idea of the restoration of balance inside the body is amazing," Szuc said.

Over the years, Szuc's wife has exposed him to various Chinese traditions. To help him learn more, she found a master to give him a Chinese name, Song Qifeng, which matches his personality of being fearless and courageous.

"I've lived almost half my life in China ... I almost feel in many respects more Chinese than Western," Szuc said and laughed.

Szuc and his wife traveled a lot on the Chinese mainland, from the metropolises of Beijing and Shanghai to some smaller cities.

"Every time I went somewhere new, I was pleasantly surprised at the growth and development of the cities. What's beautiful is the interplay between the old and the new coming together," he said.

Szuc believes he and Hong Kong have many resemblances.

While Hong Kong serves as an integrator and bridge between the Chinese mainland and the rest of the world, Szuc, in his years of living here, has also been striving to connect people of different cultures.

Born and raised in Australia, Szuc prefers to call himself a "cultural guide" who can offer both Western and Chinese lenses.

"There cannot be (only) one model in the world. There cannot be one economic model, one cultural model, one language. The world is way more interesting than that and it's more complex," he said, adding that is why people from different civilizations should learn from each other in the face of global challenges.

China has made tremendous achievements by using the experience of Western countries, and the world can learn from China in areas from the digital and innovation development and the handling of emergencies including the COVID-19 outbreak, among others, Szuc said.

Szuc particularly stressed that one needs to abandon the prejudice and sincerely respect other traditions, which is applicable to relationships of both ordinary people and nations.

"People make assumptions. I think what's really important is you need to put a pause on your assumptions and your judgments ... (and) take the time to understand," he said.

Taking himself as an example, Szuc said only after he made so many trips to the Chinese mainland did he finally grasp the real picture of the country, which is completely different from the image some Western media have depicted.

"When I traveled to the mainland, I've never felt oppressed, never ... actually quite the opposite in many respects, I feel more relaxed and calm and peaceful than I do in some other countries," he said.

"If people from different cultures can exchange ideas and learn from each other on an equal basis, the world will become a better place," he said.