Deep-fried and delicious snacks are part of history

We all know deep-fried foods are caloric bombs that contradict everything in healthy eating and do more harm than good.

In China, from north to south, deep-fried snacks are an integral part of the cuisine. Like youtiao, the fried dough stick, which is among the most loved breakfast items and a perfect companion to freshly brewed soy milk.

“Deep-fried snacks are reminiscent of the flavors from my childhood. My classmates and I used to frequent the street vendors selling such snacks near the school, and although I’m trying to keep a healthy diet, occasionally I would still enjoy some old-time favorites,” said Yu Lin, who was waiting in line to buy youdunzi, a deep-fried radish cake, from a shop on Wanhangdu Road.

Unhealthy as they are, deep-fried staples, especially those composed of carbohydrates, are flavors the Chinese people grew up with. 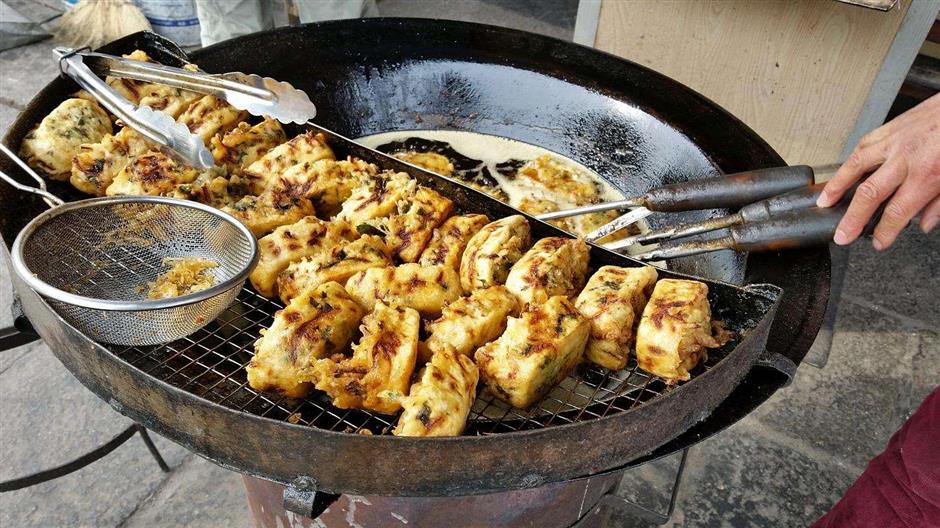 Deep-fried snacks are an essential part of the Chinese breakfast culture.

The giant, round deep-fried sesame balls known as maqiu are a classic breakfast snack with a sweet taste.

Maqiu is made with a glutinous rice flour dough that’s been well-rested to give it a softer texture. After making a ball of dough by hand, it is coated evenly with white sesame seeds and carefully deep-fried in oil until it blows up like a balloon.

Occasionally a filling of red bean paste or sesame paste can be added.

Modern recipes have sought to make maqiu a spectacle. Some restaurants would make extra large sesame balls that can compete with a basketball in size. These are difficult to make since the sesame ball must be fried slowly and one is enough for three to four people to share. 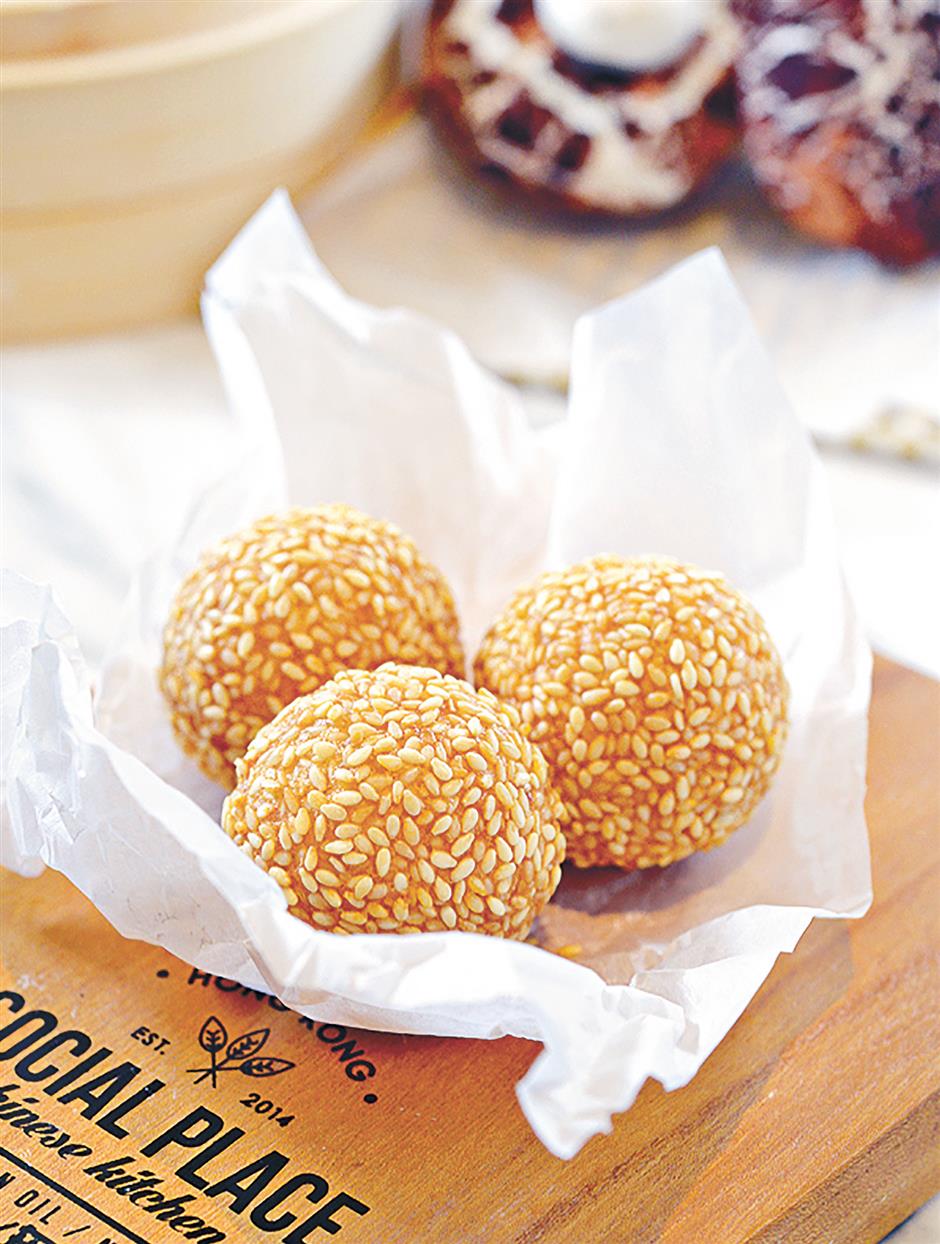 Youtiao is one of the “big fours” in a Shanghai-style breakfast, together with soy milk, dabing (big flatbread) and cifan (glutinous rice rolls). It’s a crowd pleaser all across the country, but it had its origins in a curse.

In the Southern Song Dynasty (1127–1279), military general Yue Fei was imprisoned by chancellor Qin Hui on false charges. Qin wanted Yue dead. Yue didn’t confess to the charges under torture, but the war hero who fought against the invading Jurchens was still executed for treason, a crime he didn’t commit.

People were outraged at the conspiracy orchestrated by Qin and his wife surnamed Wang, so to curse the couple they created two pieces of human-shaped dough joined in the middle to represent the couple, deep-fried it and ate it to deal with their anger. Later, the shape of the snack was simplified into two long pieces of dough joined together.

In Hangzhou, the Yue Fei Temple was built to honor the general. There you can find the iron statues of Qin and his wife kneeling before Yue’s tomb. 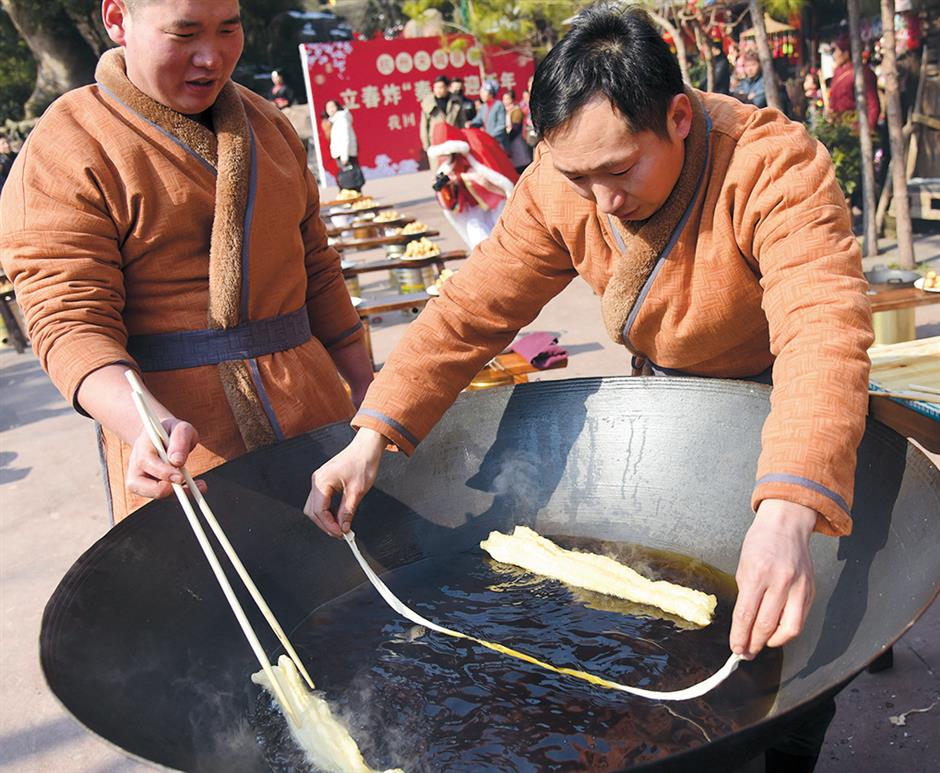 Youtiao, which twists two pieces of dough joined in the middle and then deep-fries in hot oil, was created by the people to curse Qin and his wife surnamed Wang in Southern Song Dynasty.

The famous Hangzhou snack congbaohuier is also related to this story. It was created by a youtiao vendor named Wang Er, who fried too many youtiao and couldn’t sell them all, as cold youtiao becomes greasy and chewy.

Wang Er hated the Qin couple, so he roasted the cold youtiao and wrapped it inside a pancake with leek and tianmianjiang, a sweet sauce made of fermented flour, then pressed it between iron boards until the pancake became golden and crispy. The sizzling sound also vented the vendor’s hatred. He found the taste of the wrap delicious and named it congbaohuier.

For a Shanghai-style breakfast, youtiao can be wrapped in a dabing to make a quick sandwich or stuffed in a ball of steamed glutinous rice with pickles and meat floss to make cifantuan (rice roll).

In Cantonese cuisine, youtiao is wrapped inside changfen, or steamed vermicelli roll, that’s then flavored with soy sauce and chili sauce as an option.

The fried snack can also be served with soup to add crunchiness, or made into a quick soup with luffa, a soft vegetable in the cucumber family.

The fried dough sticks can also be incorporated in dishes. A notable recipe is shrimp-stuffed youtiao, which stuffs seasoned shrimp paste inside hollow youtiao pieces, which are then fried twice to achieve a crispy texture. To serve, the stuffed youtiao are tossed with fresh pineapple cubes, cooked shrimp and mayonnaise. It’s a great way to make use of leftover youtiao.

There is a saying that eating too many youtiao will make a person dumb. That’s because traditional youtiao used alum, which contains harmful aluminum. Nowadays, vendors and shops have replaced alum with an aluminum-free agent to achieve the airy texture.

The smaller youmo is a close relative of youtiao and it’s more popular in northern China. 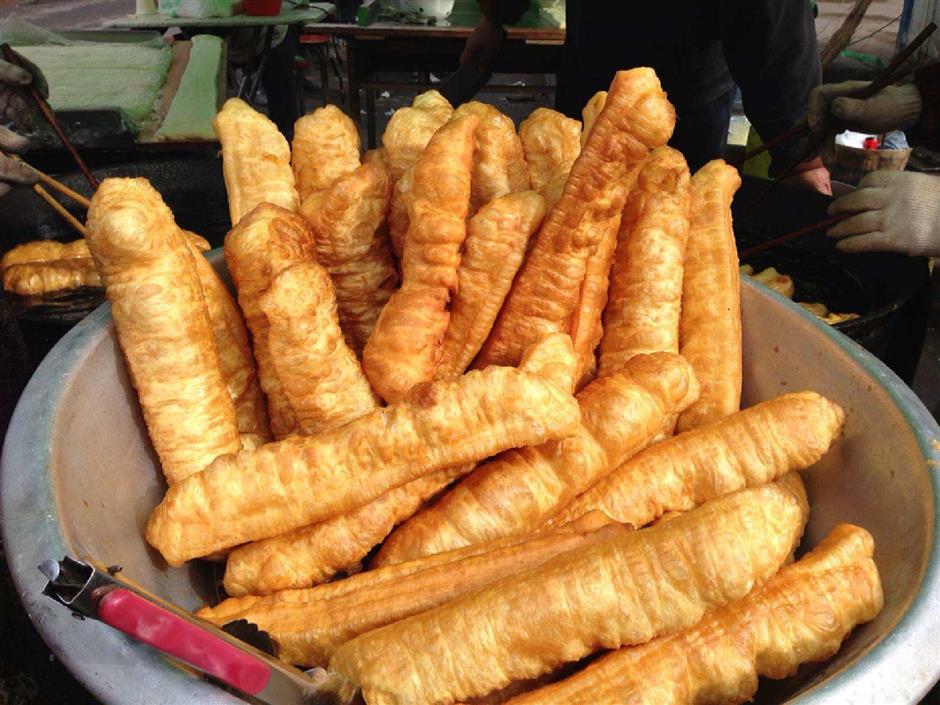 Youtiao is a popular breakfast food and perfect companion to soy milk.

Across China, one can find mahua in various shapes and flavors.

Also known as fried dough twist, this iconic Chinese snack shares some similarities with youtiao, but is more like a cracker than bread. Two or three strings of dough is twisted and then fried till all the moisture is gone.

Mahua can be sweet or savory. Popular in Shanghai are the small nori-flavored dough twists.

One can also make mahua at home, simply by twisting narrow dough sticks together and deep-frying until golden and crispy.

Tianjin is known for mahua, especially the brand Shibajie, or 18th street mahua. The dough twists are deep-fried in peanut oil and come with a variety of fillings like nuts and osmanthus flowers. Large mahua is very crispy and sweet.

Because mahua is very dry, it can be preserved for a longer time and is easy to travel with. 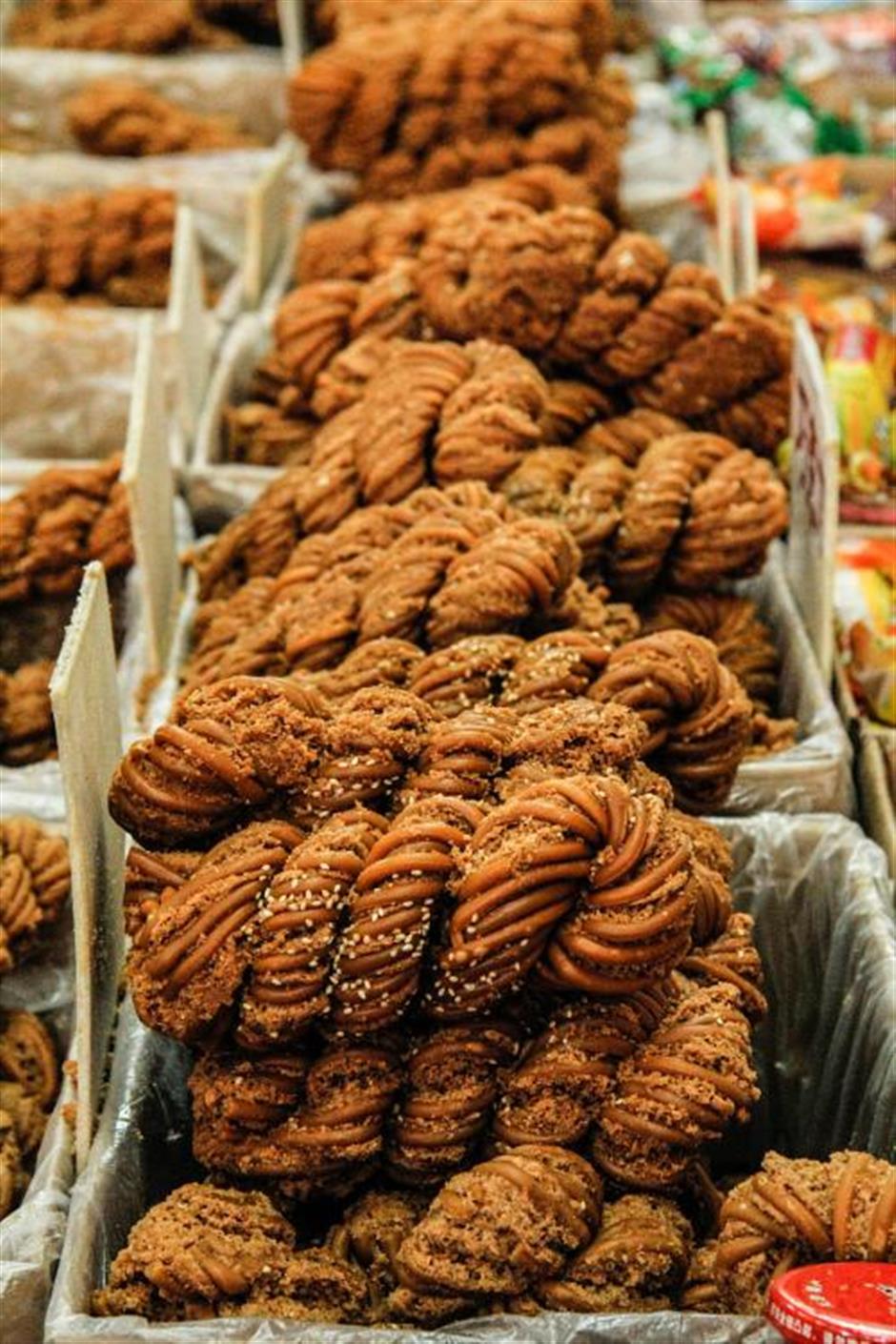 Similar to fried noodles, sanzi is a snack with a long history that dates back to the Spring and Autumn Period (770-476 BC), when it was known as hanju — a food for the Hanshi Festival, or Cold Food Festival.

Since the use of fire and preparation of food was to be avoided during the festival, people would prepare sanzi in advance.

In “Arts for the People” written by Jia Sixie from the Northern Wei period (AD 386-534), the making of hanju was described in detail. And Su Shi, the famous poet from Song Dynasty (AD 960-1279), even wrote a poem for hanju.

Sanzi is a crispy and salty deep-fried dough snack that comes in different shapes. The strips of dough are arranged in a bowl with oil spread evenly across the surface.

When the dough reaches the ideal elasticity, the maker would wrap it around a hand, pull the dough, fold it back and pull again until the even, thin noodle shape is achieved. It’s then deep-fried in oil.

Today, the Hanshi Festival has merged with the Qingming Festival on one day, and the tradition of avoiding fire and eating hanshi is almost lost. But the snack has remained. 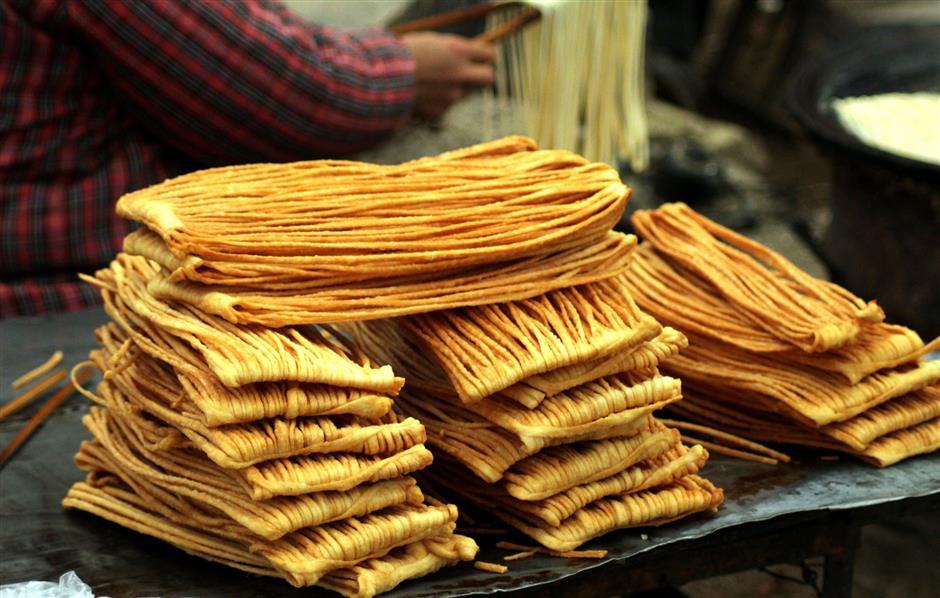 Sanzi is a snack similar to fried noodles.

The chunky deep-fried radish cakes known as youdunzi are a classic snack. They are made by frying flour batter and finely shredded white radish with river shrimps.

The thick, round shape of youdunzi is formed by a special cooking utensil to which the vendor would first add a few spoons of batter before layering the radish filling and another scoop of batter to cover. They are then put into the hot oil to deep-fry for several minutes until the cake turns crispy on the outside.

Urbanization has taken away a lot of the street snacks and finding youdunzi can take some time, as it’s usually sold at street-side food stalls. Recently, new shops specializing in youdunzi and Shanghai-style scallion pancakes have opened in downtown Shanghai, and the lines are long. Aunt Jiang’s Youdunzi (江阿姨油墩子)(1 Ransha Lane, Zhaojialou Old Town, Shendu Highway) is one of the more popular youdunzi shops in Shanghai that often has long waiting lines. The price is four yuan (US$0.6) per cake. 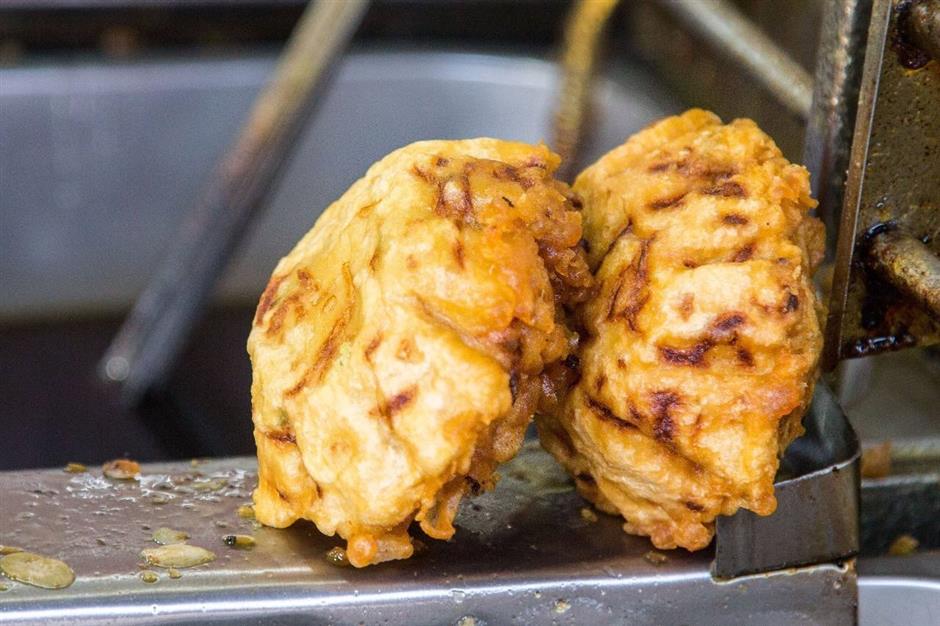 Youdunzi is a deep-fried radish cake topped with river shrimps.

Translated as oil cake, yougao is a greasy and sweet deep-fried cake, and its recipe also varies in different regions.

The snack appears in the famous northern Shaanxi folk song “Red Flowers Blooming All Over the Mountain,” as the locals greeted the Red Army with yougao.

In northern Shaanxi Province, yougao plays a vital role in the local cuisine. There are plain yougao which is served with granulated or brown sugar on top, as well as different varieties with sweet fillings, like the jujube and millet flour yougao.

Paopao yougao, or bubble yougao, is a special snack that looks like puffs. To make this extra airy pastry, the flour is added into a mixture of boiling water and lard.

The snack also has a filling made of steamed flour, sugar and toasted sesame seeds (or other nuts like walnut). When fried, the pieces of dough with fillings immediately puff up. Yougao is best enjoyed when it’s still hot. 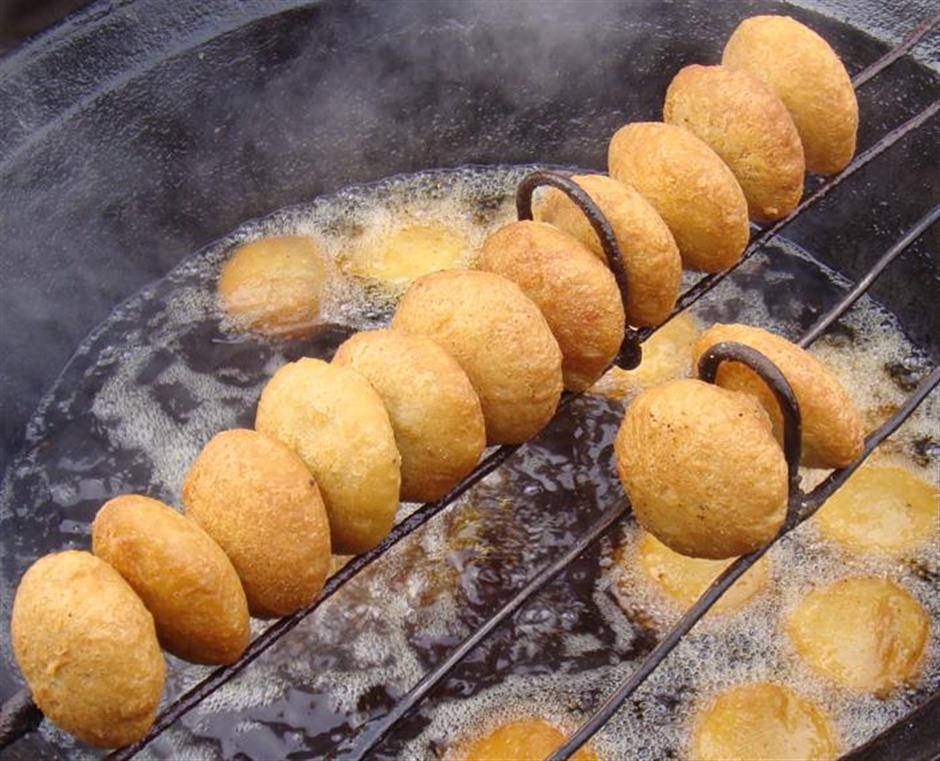 Yougao is a popular snack in Shaanxi cuisine.

﻿
Special Reports
ADVERTISEMENT
Cherries blossom in a glass of Sangiovese
Time to make the most of mussels
Marrakech, an exotic spice of culinary life
Hand mixers boom hits the nation
Serving up an authentic taste of Singapore
So you think you know noodles?
Michelin stars for restaurant's Taizhou cuisine focus
Restaurants find ways to adapt to outbreak
Snacks will keep your guests happy
The Cut Meatery calls out to local carnivores
EXPLORE SHINE