China's refreshing gift to the world 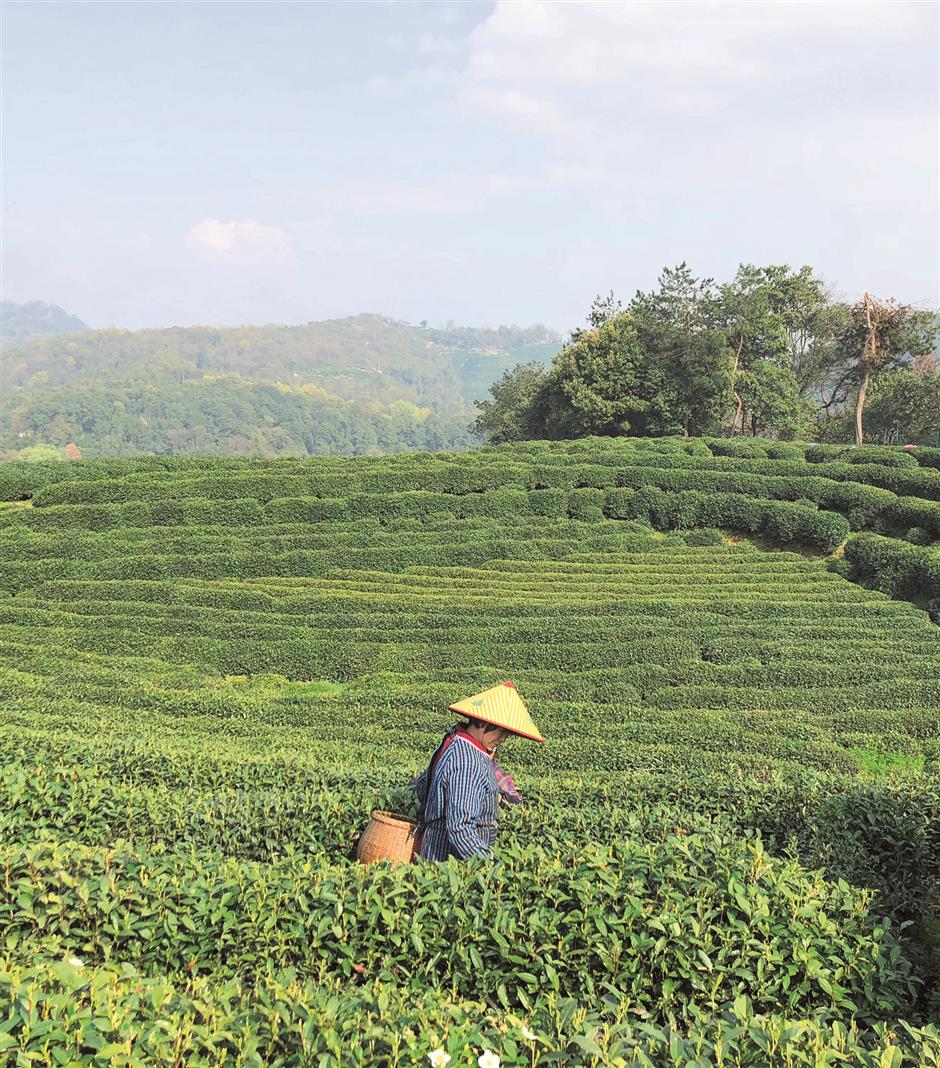 For Hangzhou local Xu Jianqiu and his family, the 30 days starting from the middle of March are the most important in the whole year. Their livelihood depends on a natural product harvested during that period — Xihu (West Lake) Longjing tea. Living in picturesque Longjing Village, Xu and more than 600 other villagers have all spent their lives with Xihu Longjing, one of China’s top 10 most famous teas.

With a history dating back more than 1,200 years, Xihu Longjing tea reached the first peak of its fame in the Qing Dynasty (1644-1911). Emperor Qianlong (1736-96) visited the Xihu Longjing tea plantation four times during his six trips to the Jiangnan region, the rich and prosperous area to the south of the lower reaches of the Yangtze River. The emperor observed the process of making Xihu Longjing tea and wrote four poems about it. He was so impressed by its fragrance, taste and health benefits that he named 18 tea trees in front of the village’s Hugong Temple “royal tea.” Those trees are still there today, welcoming visitors from around the globe.

Xihu Longjing, named after a renowned scenic spot in Hangzhou, Zhejiang Province, then began its journey to become the most popular green tea both at home and abroad.

Its quality is highly impacted by time. Two “solar terms” of spring are the ones that define the quality — Qingming, the 15th day after the spring equinox, and Guyu, the period when the sun reaches the celestial longitude of 30-45 degrees. Qingming normally falls on April 4 or 5, Guyu on April 20 or 21. The best tea is called mingqian tea, which means tea plucked and roasted before the Qingming Festival. Yuqian tea, produced between Qingming and Guyu comes in second.

After Guyu, the quality of Xihu Longjing drops significantly so production will gradually cease in May.

Mingqian tea, which can be handpicked from around March 15 depending on the weather, is the first batch of leaves. They are tiny and tender, yet contain the most nutrients, such as tea polyphenols and vitamins that are condensed in the leaves during autumn and winter. Mingqian tea also has the best color, fragrance and taste. These tea leaves are handpicked strictly following the rule of “one sprout and one leaf.” 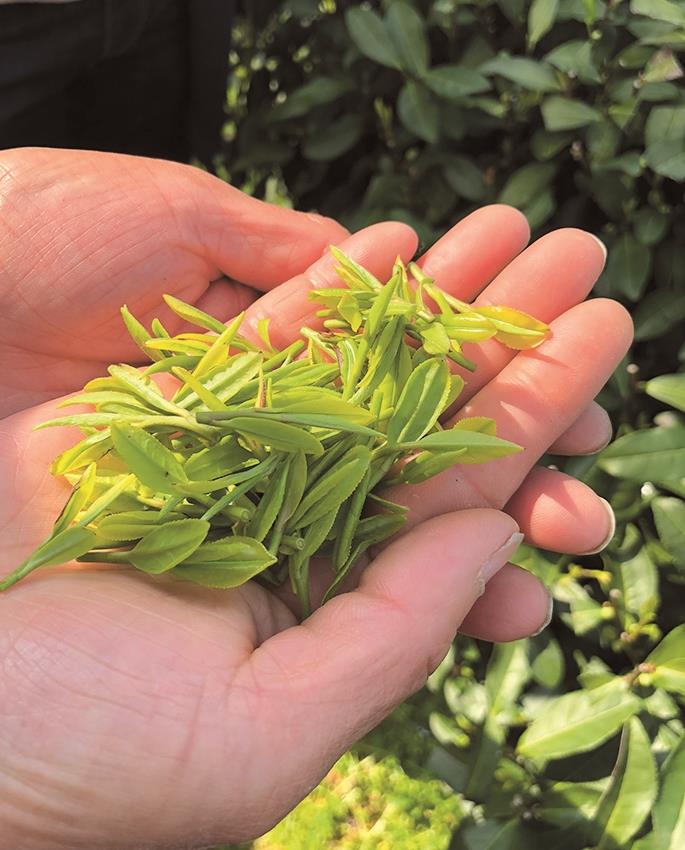 The first batch of tea leaves are tiny and tender, yet contain the most nutrients.

The remaining leaves keep growing, but their quality drops as they grow faster with the rising temperature. The trees can produce around 30 batches of leaves during the season, each batch of lesser quality than the previous one and therefore cheaper on the market.

That’s why every year it’s a race against time for Xu and his family to pluck and roast tea leaves. On March 14 this year, Xu’s family and the helpers they hired started tea plucking on Shifeng Mountain as early as 5am every day.

“When I was a kid, all the schools around this area gave their pupils half a month off so that they can go back home to help pick tea in the peak season,” 67-year-old Xu recalled.

A pair of experienced hands can pluck just 600 grams of leaves a day, which can be dried to around 130 grams of Xihu Longjing tea.

The drying process is purely manual and time-consuming too. The fresh leaves are first spread out on a large surface for eight to 10 hours, reducing their moisture content by 25 percent. They are then sorted according to size. Then comes the most important step that only Xu has mastered in his family — chao, or stir-frying the tea leaves in a large iron wok heated to around 250 degrees Celsius.

The fresh Xihu Longjing tea leaves are first spread out on a large surface for eight to 10 hours, reducing their moisture content by 25 percent.

Using his bare hands, Xu stir-fries 100 grams of tea leaves for 20 to 25 minutes, reducing their moisture content by another 50 percent.

“This is a very skillful process,” said Xu, “I started to learn it since the age of 13.”

A series of different hand movements are used throughout this process — shaking, pushing, holding, pressing and rubbing. 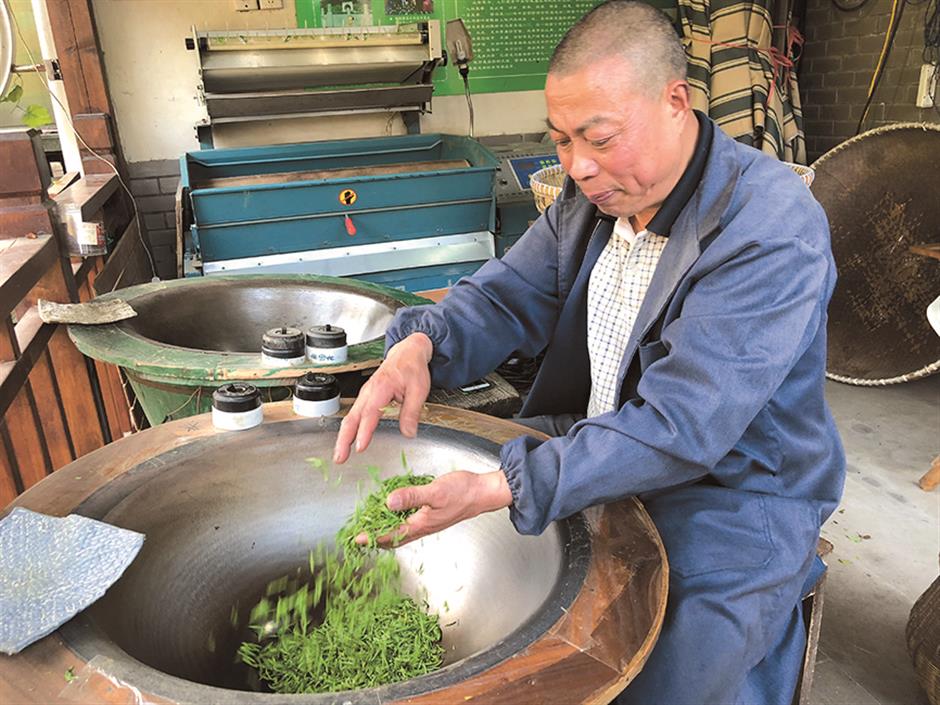 “It’s all about the feeling,” Xu said when asked how he determines when to do what.

Xu starts stir-frying every afternoon and has to work on two woks simultaneously when the need arises.

After the first round of stir-frying, the half-dried tea leaves are spread out again, and then stir-fried once more until the moisture content is reduced to around 5 percent, the standard of Xihu Longjing tea.

A skilled worker like Xu can produce around 1,000 grams of dried Xihu Longjing tea a day. Xu’s family owns a tea plantation of around 14 mu (9,333 square meters) on Shifeng Mountain. Most of the tea trees have been there for more than 100 years.

“I don’t know when they were planted exactly. They were there since the time of my taitai (great-grandfather),” said Xu.

This is frequently the case in Longjing Village. More than 90 percent of the tea trees are called qunti zhong, which are the oldest trees in the area, some of them dating back to the Qing Dynasty or even earlier.

In Lu Yu’s (AD 733-804) “The Classic of Tea,” the earliest known monograph on tea, the author dedicated one chapter to utensils, detailing 28 items used in drinking Chinese tea. The book recommends a chawan, or tea bowl, to drink tea.

To enjoy a cup of valued Xihu Longjing, one must choose suitable tea utensils and water that can bring out the best of the tea.

Pang Ying, owner of He Cha Guan, a traditional Chinese teahouse in Fayun Village that neighbors Lingyin Temple and the five-star Aman Fayun resort, is an expert in choosing the proper utensils for different teas.

“Always use porcelain teaware and never use glass containers.” she said, “And when drinking Longjing tea, always choose a chawan, as the water temperature in it can drop rapidly, thanks to its wide open top, so that the tea leaves won’t turn yellow under the heat.”

She also recommends ou, a larger porcelain container, if the tea is to share. 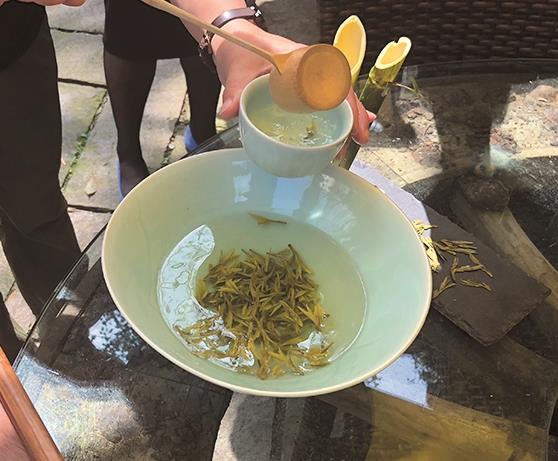 Ou, a porcelain container, can be used to share Longjing tea.

The best water suitable for Longjing tea is said to be Hupao Spring water. The spring, another scenic spot in Hangzhou, is a natural spring that produces the finest water in China. Purified water is a simple substitute. But don’t use mineral water as the minerals it contains may affect the taste.

Put 2-3 grams of Longjing tea in a chawan, pour in 150ml boiled water cooled to 80-85 degrees Celsius and wait for two to three minutes to enjoy the gentle, refreshing taste of Longjing tea.

Using tea as an ingredient has a long history in China. Longjing tea is best known to pair with shrimp, a dish that can be found on the menu in many high-end restaurants in Shanghai and Zhejiang Province. This spring, the Midtown Shangri-La hotel in Hangzhou has thought out of the box to create Longjing chicken soup. Chicken from a local Hangzhou farm is stewed in mountain spring water. After 90 minutes, the sweet water melts the original tasty chicken. The dish is finished with a pickle of freshly picked Longjing tea leaves on top. The new dish can be found in the hotel’s Chinese restaurant through April. 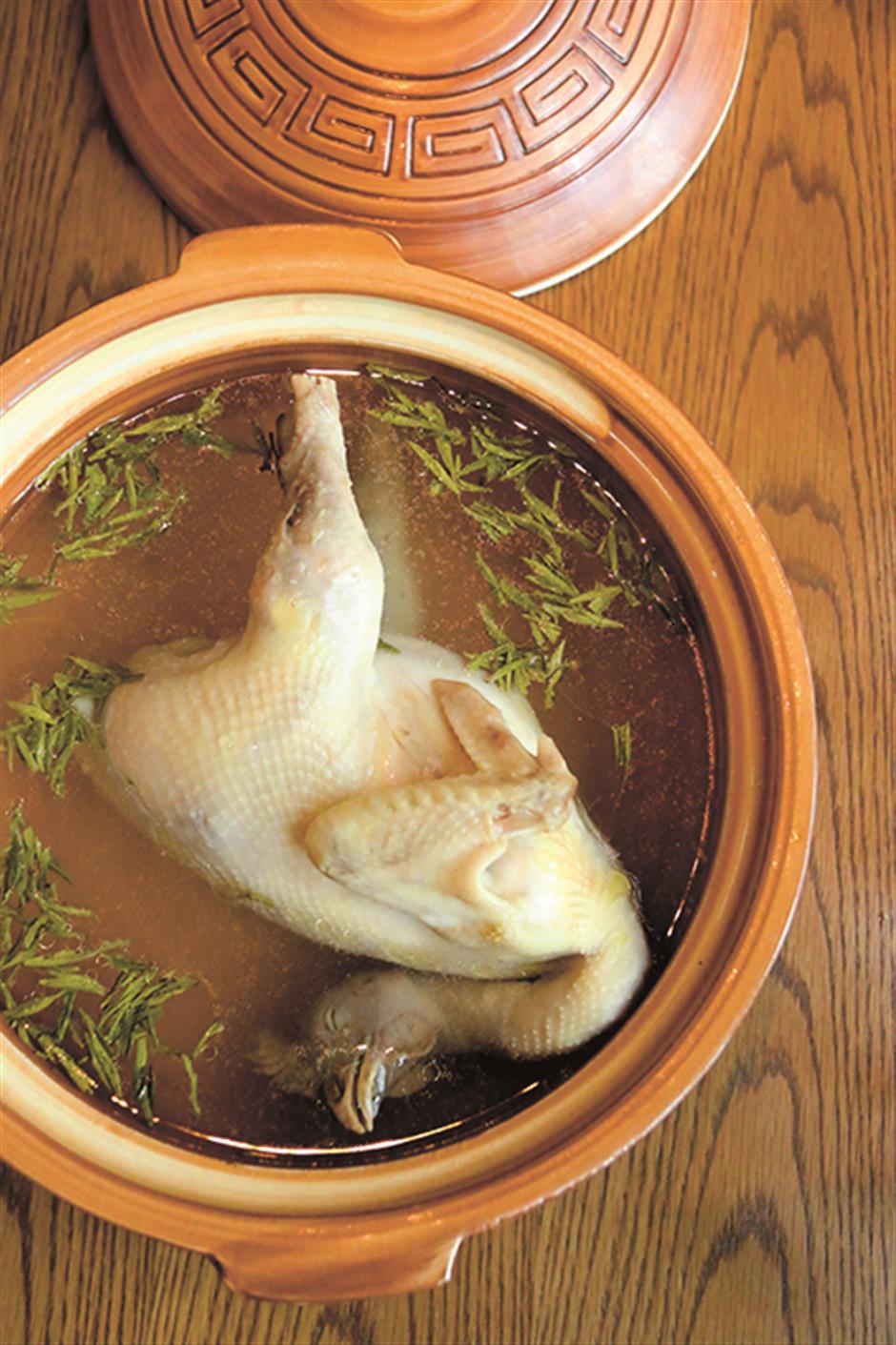 Shangri-La chefs in Shanghai, Suzhou and Hefei are also creating tea-featured dishes such as deep-fried prawns with green tea, stir-fried Taihu Lake shrimp with Biluochun tea leaves and marinated fish with Huangshan Maofeng Tea. The dishes also have a tea pairing menu featuring the best local tea from each area.