When eating is just too much

Eating shows and live-streaming has become a booming business in China over the past couple of years.

Online shows where people make money by eating in front of the camera were a booming business. That was until this summer when a show host in Shenyang, Liaoning Province, died.

The host, whose last name was Wang, was rushed to hospital on the evening of June 23, just before he was due to eat a large bowl of braised pork belly for a livestream. He felt pain in his eyes and numbness in his arms, according to his wife, and the symptoms worsened when he was in hospital. Wang died after seven days of emergency treatment.

The news provoked debate about extreme eating shows as well as reflections on food waste in general. Across China, new guidelines to curb food waste are being introduced, with the public encouraged to cut down on food waste on a daily basis.

On August 17, Shanghai issued guidelines asking local restaurants to mark the quantities of food on their menus, helping customers to order the appropriate number of dishes, and offer smaller portions.

@大胃mini (big stomach mini), for example, an eating show and livestream blogger with more than 10 million followers on Weibo, changed her ID to @梨涡少女mini (dimple girl mini). Known for eating large amounts of food, such as 100 sausages and 1,000 hairy crabs (on a livestream on September 19, 2018), she also deleted videos of devouring 10 lunch boxes containing rice and stir-fries and other food challenges.

Although many questioned her ability to eat so much and still stay slim, @梨涡少女mini has repeatedly claimed that she was born with a big appetite and had taken CT scans of her stomach before and after eating.

A similar host, @大胃浪胃仙 (big stomach 浪胃仙), not only changed his ID to @我是浪胃仙 (I am 浪胃仙), but also deleted all previous eating videos on Weibo, plus the majority of videos on Douyin (the Chinese version of TikTok) where the host has close to 40 million followers. 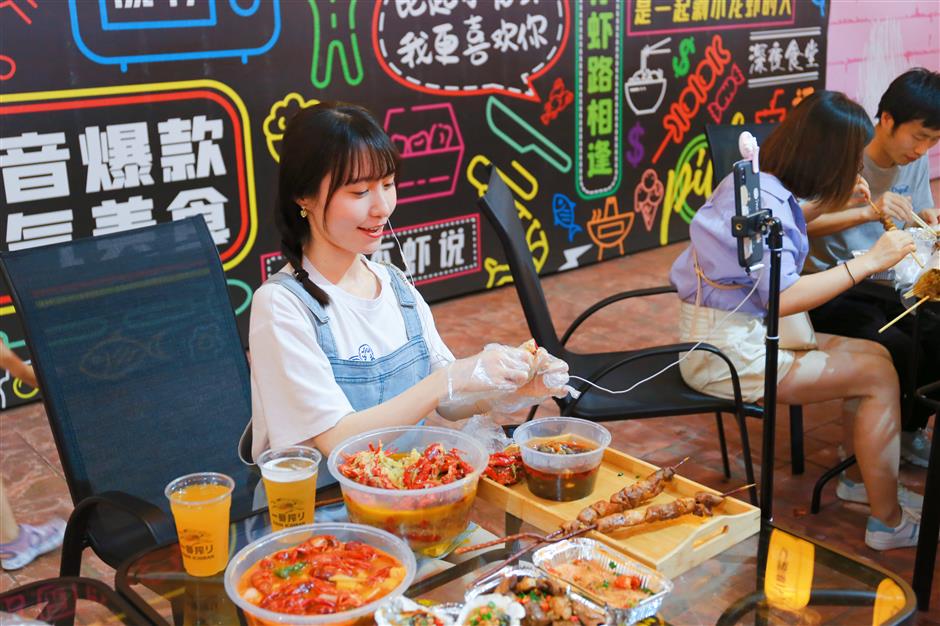 Korean “mukbangs,” eating shows where the host consumes lots of food while interacting with the audience, became popular in South Korea over the past decade. The trend started to take root in China over the past five years as video sharing and livestream platforms thrived.

The images “mukbang” hosts present onscreen are the exact opposite of healthy eating, and they must “perform” in a way that everything they eat seems utterly delicious, no matter how strange or extreme the food.

Competitive eating or speed eating has a long history, Participants sit at a long table and see who can eat the most, such as dozens of hotdogs and burgers for example. The winner is determined by the time taken to finish the food, though some choose the person who eats the most.

The difference between competitive eating and online eating shows and livestreams is that competitive eaters don’t eat such an insane amount of food every day. But hosts do when they strive to maintain a relatively large audience base. They don’t eat at a fast speed and maybe not as much as a competitive eater would in a day, but consuming thousands of calories frequently can be disastrous in many ways.

In order to gain viewers and online traffic, hosts must stand out in the sea of eating show channels by consuming extreme quantities or seek novelty by staging shows to eat extra spicy dishes, sweets and so on, thereby promoting a very unhealthy lifestyle.

Hosts with millions of followers on social media can make a lot of money by promoting products such as snacks and beverages, as well from advertising the restaurants they visit. 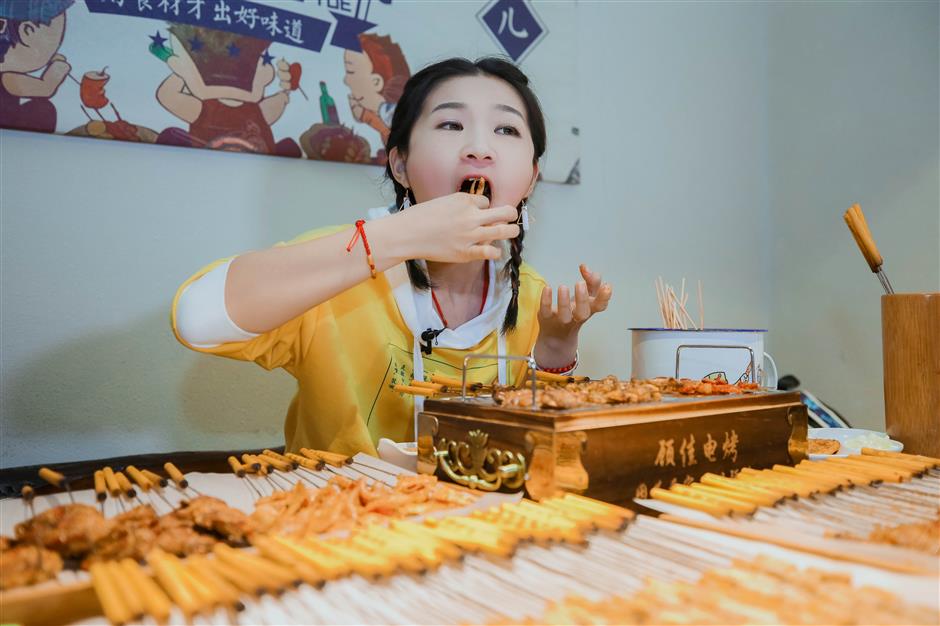 Eating show hosts and livestreamers can make money from promoting products and restaurants.

Some people find watching people eat food non-stop mesmerizing, some who are on diets often say they watch to gain the feeling of “they’re eating it for me so I don’t have to,” while some just find the interaction with hosts engaging.

“I sometimes come across eating show videos on Weibo and bilibili.com, I find that it’s very easy to get lost while watching the videos when they are beautifully shot and edited with great sound. It also makes me feel that watching them eating the food that I’m craving for saves me from eating it, as watching people chewing and swallowing food gives me a strange sense of satisfaction,” said 26-year-old Alice Wang.

In reality, the body simply cannot handle extreme quantities of food every day. To keep viewers, hosts must cheat, either throwing up after the show, or cutting scenes where they spit out food they’ve chewed, making viewers believe they have actually eaten everything.

Loyal followers are very defensive when questions are raised about unusual eating habits, saying their favorite hosts are just “born that way” and there are frequent quarrels with others who question the authenticity of videos.

There are fans who are worried about the hosts’ health, like Weibo user @土豆不吃香菜 who wrote: “It’s not necessary to emphasize that you can eat a lot every time for the sake of health” under a video shot in a Beijing restaurant where @梨涡少女mini consumed at least four large servings of steak, two large pots of braised beef, two bowls of beef soup and a large bowl of rice. 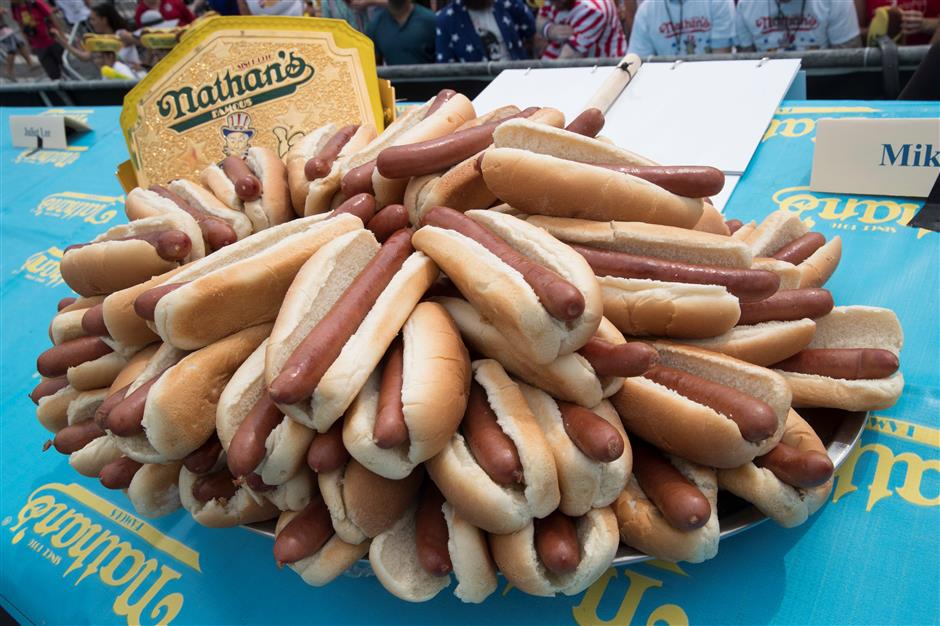 Competitive eating has a long history.

The list of diseases caused by excessive eating goes beyond stomach problems such as acute gastric dilatation (AGD). It can damage the heart, liver and kidney, affect the joints and lead to blood clots. Many hosts have gained significant amounts of weight – Wang had put on 40 kilograms in the six months before he died.

Gao Lei, vice president of Shanghai Renai Hospital and a gastroenterology expert, said everyone’s stomach capacity is different, and the body had a mechanism to indicate when there was enough food in it.

“Our stomach has a feedback system that passes the gastric wall tension information to the nerve center, creating the feeling of fullness and appetite would then fade away,” said Gao. “There’s an interesting phenomenon in the stomach, that it reacts slower than the actual reflex, the digestive enzyme is secreted before the food is consumed, so satiety comes after the stomach is full.”

Though seldom reported, AGD can be the fatal result of extreme eating habits, whether staged for show or in people who suffer from binge eating. By the time you feel full, the body can have consumed way too much food, and continuing to eat can cause the gastric wall to become thin and decrease the blood supply, which could cause AGD and gastric perforation.

For people who force themselves to vomit in order to stage an exaggerated appetite for a show, there’s the risk of acute massive hemorrhage caused by tears in part of the stomach, as well as a rise in blood pressure and intracranial pressure. The latter may even cause an aneurysm.

Theoretically, the stomach can be trained to expand its capacity but “excessive eating, no matter if the food is healthy or not, is harmful to the stomach, it’s also related to age as young people have a stronger metabolism and one cannot overload the body with food in the same way when they reach their 40s or 50s,” Gao said.

1. Order fewer dishes than usual in restaurants when you’re unclear of the portions they serve and how much food the group can finish. You can add more dishes when plates are beginning to empty and people are still hungry.

3. If you cook frequently, store food appropriately to cut down on waste. Shanghai has a humid climate and a vacuum sealer (a good quality one for domestic use is around 200 yuan) can come in handy when storing grain, dried products (such nuts, mushroom and spices) and meat portioned for each meal. The device seals off air and moisture, preventing bugs and mould to greatly extend shelf life as well as saving space in the kitchen.

4. Root vegetables such as carrots, potatoes and taro tend to go bad quickly, especially in summer. One way to store them is to cut in slices or chunks, seal in bags and freeze. When you need to cook the vegetables, simply pour them into the pan without thawing.

5. Large loafs of bread are best stored in the freezer after they are divided into portions for each meal. You can reheat bread from the freezer in a non-stick pan, toaster or oven. Brushing olive oil on top will greatly enhance the flavor.