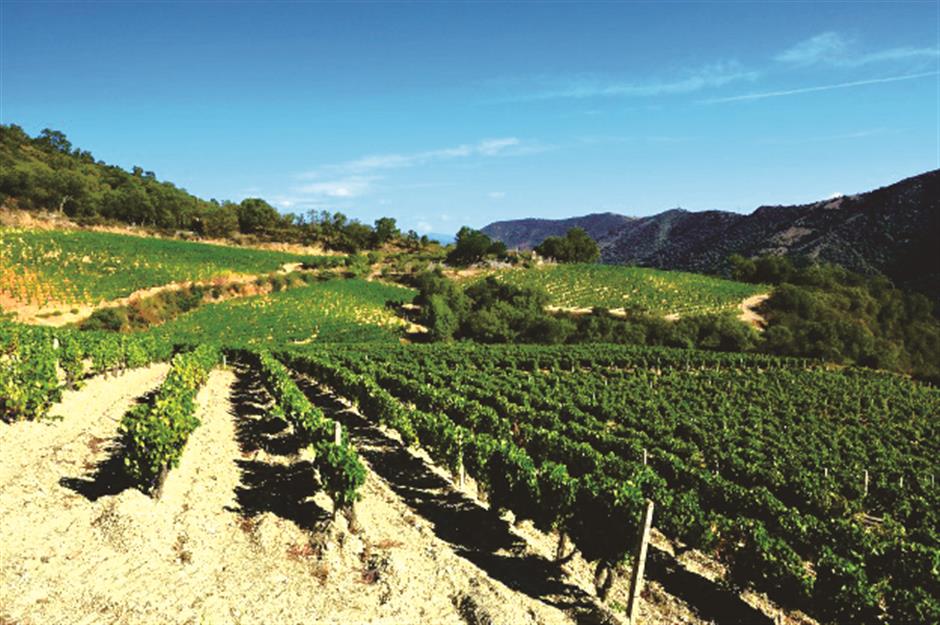 Back to the future buckwheat! There was a time when this pseudograin was a staple food for many people. Then, with the early 20th century advent of nitrogen fertilizers and mechanization, buckwheat lost out to higher yield crops like wheat, corn and rice. But certain cultures like the Japanese never lost their taste for buckwheat food, especially soba noodles.

Buckwheat has experienced a rebirth in popularity in the West because of a marketing campaign saying ancient grains are healthier and more sustainable than modern mainstream grains like wheat, rice and corn. Nutritional scientists are increasingly advocating consumption of buckwheat for its high-fiber and low-calorie attributes. The grain is also rich in minerals and contributes to better health and greater longevity. There’s a wine growing island that likewise is linked to greater health and longer lives.

Sardinia is part of what National Geographic terms the Blue Zone, a small group of distinct places where people routinely live to 100 years old or older. Okinawa Island in Southern Japan, the Nicoya Peninsula in Costa Rica and the Seventh-day Adventists in Loma Linda California are the others. In all of these blue zones, there’s a discernible emphasis on family, community, active socializing and healthy diets. Uniquely, in Sardinia, wine is also a vital contributor. One variety in particular has been attributed to longevity in Sardinia, but let’s discover the island and its long wine history first.

Geographically and culturally somewhat distant from the Italian peninsula, Sardinia is the second-largest island in the Mediterranean Sea. Its southern neighbor Sicily marginally takes the crown. With a mostly rural lifestyle and plentiful grazing animals populating the land, there’s a decidedly slower pace to life. The island is multi-cultural with Spanish influence as apparent as Italian, something not surprising when you know the history.

In 1297, Pope Boniface VIII proclaimed King James II of Aragon as the ruler of Sardinia and Corsica. Actual control by the Spanish kingdom wasn’t realized until the Aragonese fully conquered Sardinia in 1324. After the marriage of Ferdinand II of Aragon and Isabella I of Castile in the 15th century, Sardinia became part of a unified Spain. Over centuries of occupation, the Spanish contributed much to the island, not the least of which was advancing viticulture practices, including planting numerous varieties that continue to flourish today.

Historians have long assumed that Cannonau, the most important and prolific red wine variety in Sardinia, was one of the varieties brought by the Spanish; however, a new study suggests otherwise.

Italian archeologists discovered grape seeds that are genetically nearly identical to modern-day Cannonau grapes. These seeds are believed to date back to the Bronze Age Nuragic settlements in Sardinia. The authors of the study claim that the existence of the Cannonau grape, known as Garnacha in Spain and Grenache in France, predates the Aragon occupation and therefore is most likely native to Sardinia. Should this be true, then the tale of this grape originates in Sardinia, is adopted in Spain and then embraced by France and the rest of the world.

The grape’s history may be ancient but the Cannonau di Sardegna Region that encompasses the entire island was only granted DOC status in 1972. The Cannonau di Sardegna denomination accounts for nearly a fifth of Sardinia’s wine production and is predominantly red wine but rosato, the Italian name for rose, sweet and fortified liquoroso wines are also produced.

By law, red wines must be at least 85 percent Cannonau with a maximum of 15 percent local varieties allowed. The same varietal requirements apply to the rosato, fortified and sweet wines, while Classico wines must have at least 90 percent Cannonau contribution. Minimum aging requirements are two months for rosato, five months for reds, one year for fortified and sweet wines and two years for riserva wines.

Well-made Cannonau wines tend to be medium to full bodied, have moderate to high alcohol levels and feature generous red and dark fruit flavors with enticing floral and white pepper notes. Younger wines have more fresh and exuberant qualities while reserve level wines offer greater concentration, complexity and age-worthiness. All Cannonau wines are rich in polyphenols and anthocyanins that have antioxidant properties and have been associated with the remarkable longevity of the Sardinian people.

Two of my favorite Cannonau di Sardegna DOC producers are Santadi and Argiolas. The former makes a delightful wine full of dark fruit flavors with lovely notes of chocolate and tobacco, while the later makes a red fruit centric wine with a fine fresh finish. Both wineries are highly-regarded and have played key roles in putting Sardinian wines on the global wine map. Other noted Cannonau producers with wines available in Shanghai include Sole Sardo, Mesa and Sella & Mosca.

Enjoy younger Cannonau wines within five years of release and serve about 15-16 degrees Celsius. Riserva wines can be cellared for over a decade and are best enjoyed about 18 degrees Celsius after 30 minutes of breathing. Cannonau red wines may be the poster child of Sardinian wines but fine wines are also produced using the Vermentino, Nuragus, Semidano, Torbato and Moscato white and Carignano (Cariñena), Bovale Sardo (Graciano), Cagnulari and Monica red varieties. These wines may contribute to well-being and longevity, but alas these are yarns for another column.