Shanghai is a mega city with a rich mixture of culinary opportunities. Not only can you find all kinds of international cuisines with diverse flavors, but also experience the hidden treasures of Chinese regional cuisines.

In the past, restaurants serving regional cuisines in Shanghai were more of a broad concept, such as focusing on highlights of the eight major Chinese cuisines and the more dominant street food cultures (like the large number of Sichuan-style chuanchuan spicy skewers eateries). It was easy to try regional cuisines every now and then, authentic or not that authentic, but not too easy to dive deep into the more interesting and exciting aspects — when ordering Sichuan cuisine, it’s often a choice between spicy hotpot and boiled fish.

It’s in the past two years that the city has started to see lesser-known delicacies of the most popular regional cuisines. Restaurants and eateries have started to specialize in the signature dishes of a smaller branch of a regional cuisine, a more elaborate trend that has introduced many great delicacies to Shanghai.

Qiaojiaoniurou, which translates directly as “foot-lift” beef, is now among the city’s hottest food trends attracting diners happy to wait in line for hours. The Xiaosinv Leshan Qiaojiaoniurou restaurant (around 90 yuan per person on average) that opened at the beginning of April near Jing’an Temple once recorded over 200 tables waiting during dinner time.

The special delicacies from Leshan in Sichuan Province are great news for people who cannot handle the spicy side of Sichuan cuisine. It’s 100 percent non-spicy and chili free.

Leshan is one of the must-visit destinations for food lovers, apart from seeing the astonishing Leshan Giant Buddha (a 71-meter-high statue of Maitreya), the city is famous for snack-style Sichuanese delicacies, like sweet skin duck, soft tofu, ye’erba (rice wrapped in leaf) and, most representatively, the qiaojiaoniurou.

The delicacy is a savory, slow-cooked beef soup that emphasizes the original flavors of different parts of the cow. It’s usually served in the form of hotpot to preserve the heat and also to cook different ingredients conveniently.

It’s said to have originated in the 1930s when a traditional Chinese medicine doctor picked up some of the beef offal thrown away by the rich and added it to the medicinal soup he was cooking by the riverside. The flavor was great and the additional herbs also boosted the health benefits. He started selling the soup and attracted large crowds, so when there were no seats, some would stand with one foot placed on the beam under the table, hence the name “foot-lift.”

The beef bone broth for qiaojiaoniurou features over a dozen herbs and spices, such as angelica root, star anise, long pepper, amomum fruit (sharen, warm in nature) and more. The meat cooked and served in the broth includes both fresh, hand-sliced beef and an assortment of offal that has been prepared in advance to remove the undesired taste and smell — beef tripe, tendon, tongue and more.

For people who want stronger flavors, qiaojiaoniurou is usually served with seasoned chili flakes to coat the tender meat with some heat. The soup can also become extra rich and a little greasy after it’s cooked for a long time,

After enjoying the meat and offal in the pot of qiaojiaoniurou, many people would then cook some seasonal greens and tofu to finish up the meal.

In addition, restaurants specializing in qiaojiaoniurou would also serve other delicacies from Leshan, such as sweet skin duck, a marinated duck dish with glossy skin. 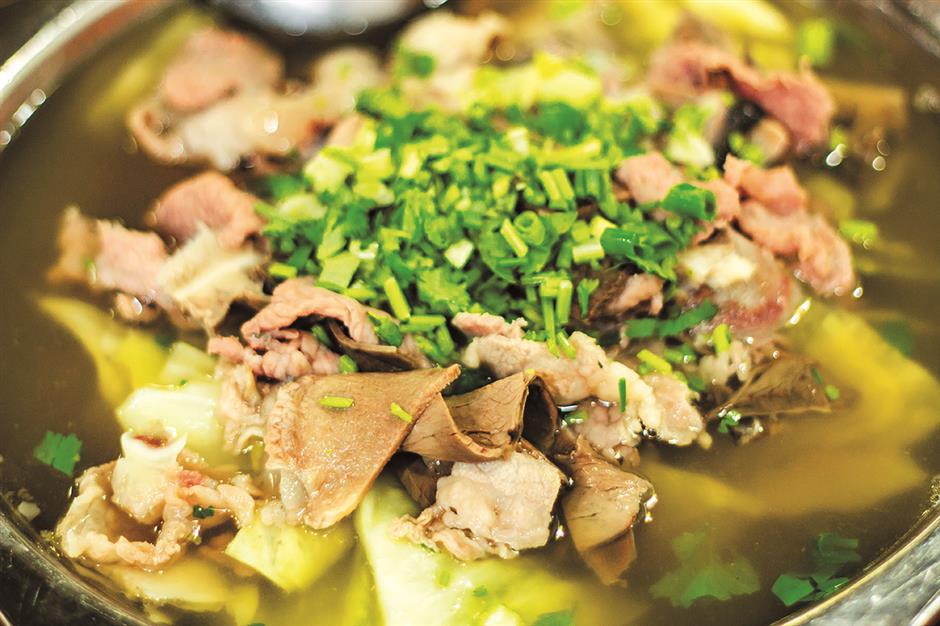 Qiaojiaoniurou, or “foot-lift” beef, is a Sichuan-style beef soup and stew known for highlighting the original flavors.

The beef noodle hailing from northwestern city of Lanzhou, Gansu Province is one of the best lunch options and can be found in all regions across China, whether in a small eatery by a street corner or in standardised franchise restaurants.

The dish is not lesser known, but more authentic versions used to be hard to find in Shanghai. The eateries that sell the simplified version of the beef noodle at a cheaper price only presents a general idea without any detail.

The beef noodle, though humble it is, has a long list of rules that need to be followed. For starters, the noodle is hand pulled, and specific diameters must be defined for diners to choose, like erxi, sanxi, maoxi and more, which require different pulling techniques.

The soup is a clear beef broth boasting a rich fragrance, and other standards that must be followed include thin slices of white radish (also to a specific thickness) for the white, cilantro or garlic sprout for the green, chili oil for the red. The beef is usually ordered separately, each serving is around 50 grams, or liang in Chinese measurements.

The emerging Lanzhou beef noodle restaurants also sell other local specialties such as tianpeizi, a sweet and sour soup made of fermented oats. The oats in their original form are soaked in water and then pounded to remove the husk, then steamed, cooled and mixed with water and jiuqu, the fermentation starter. Tianpeizi is served by adding water to create a sweet and sour beverage with chewy bits of oats. A very popular dessert or snack after a rich meal. 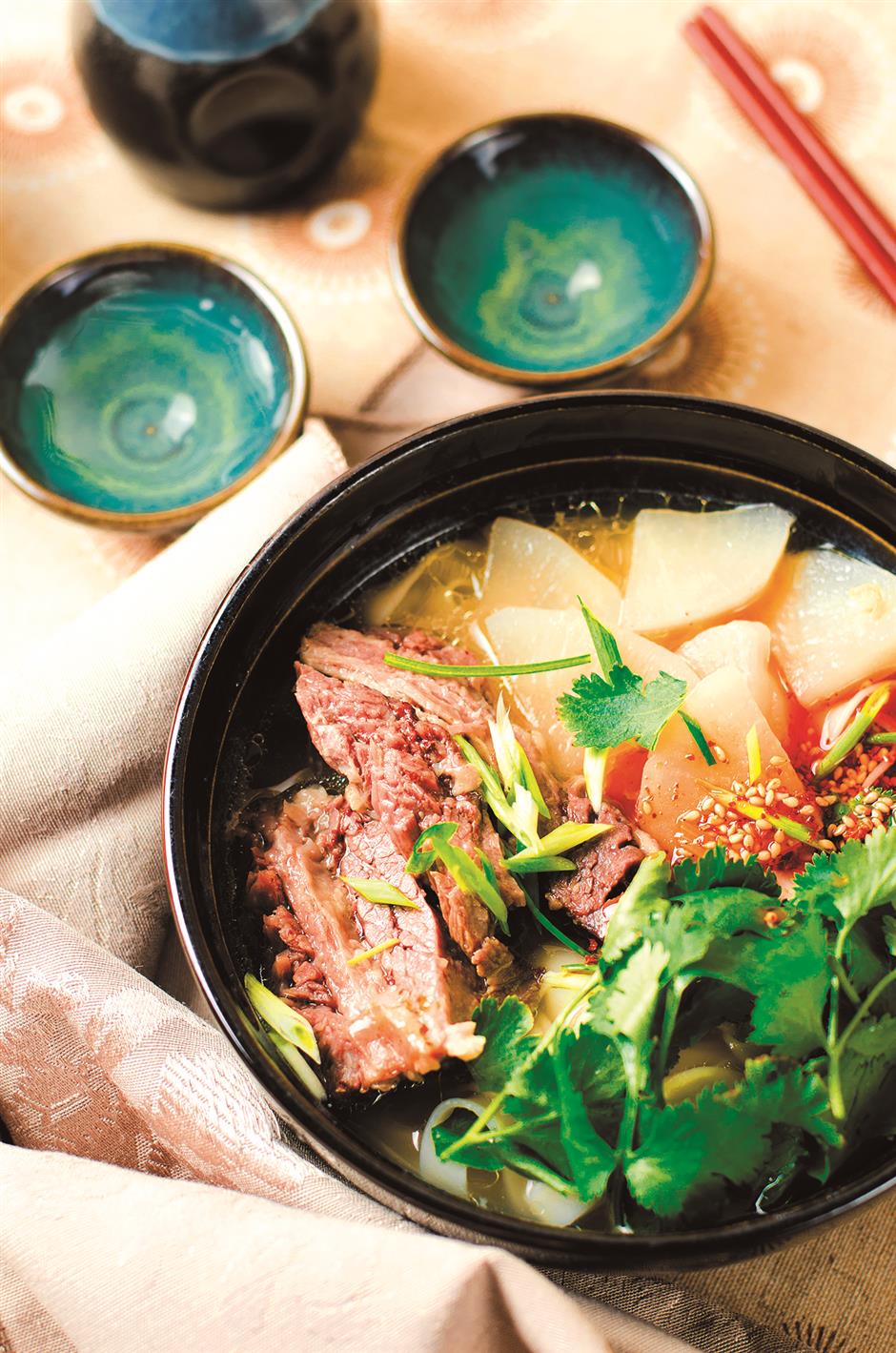 Fuding roupian, or pork slices, is a more special traditional snack dish named after a county-level city in Ningde in Fujian Province. This comforting dish is served in an aromatic and warm soup.

The pork slices must undergo a series of procedures by hand before being cooked in a large pot of water like meatballs and served in the broth. Two ingredients are required to make the special meat slices — lean pork meat, preferably a cut from the hind leg, and starch (sweet potato starch is best). The ratio of meat to starch is about 1 to 0.7, and additional seasonings are scallions and salt.

The fresh lean pork meat is first sliced into small strips so that they can be easily pounded into a mince. Scallions and salt are added to improve the flavor. The second step is rubbing the meat hard with both hands, while adding a little bit of baking soda and water until the meat paste is sticky.

Next, the appropriate amount of starch is added into the pork mince for another round of rubbing, until all the starch is completely merged into the meat. With a large pot of boiling water, pull small pieces of the mince to cook for a couple of minutes until they float to the surface. The soup is flavored with ginger, vinegar, chili, white pepper, nori and cilantro.

Eateries that specialize in Fuding roupian often sell other signature dishes from Fujian such as rouyan, a kind of huntun that uses a skin made of pork and sweet potato starch, as well as tiny meat buns, nori pancakes and handmade Fuzhou-style fish meatballs.

A top-ranking franchise serving Fuding roupian in Shanghai is Lu Ding Ji, which has outlets on Hunan Road and Fumin Road. 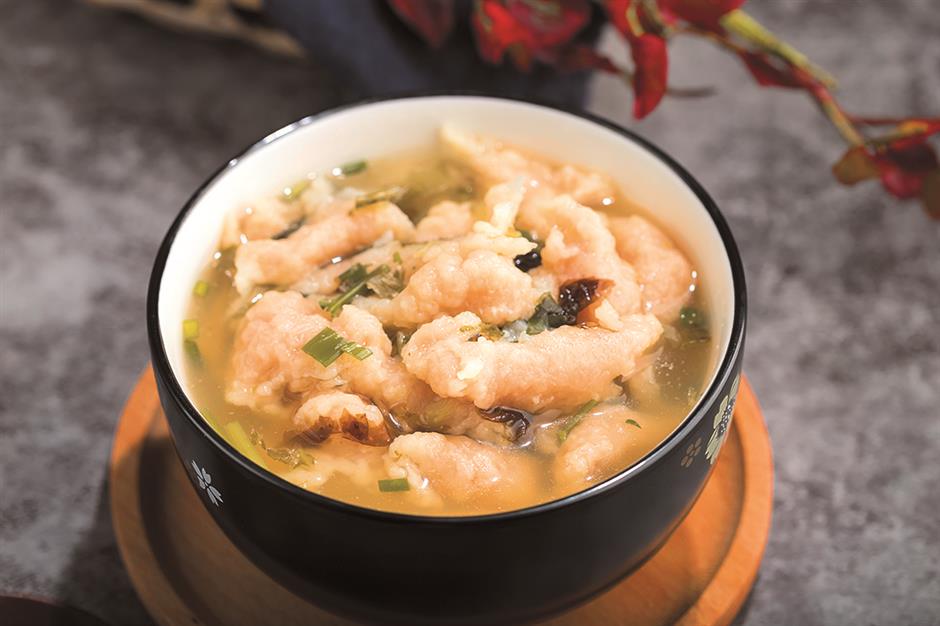 The Fuding pork slices made of lean meat and starch are served in a warm broth.