IN the burning hot summer, ice cream can be the most important meal of the day.

2020 was a fun year for ice cream lovers with dazzling new releases and exotic flavors – such as milk with squid or meat floss with chives. But in 2021, consumers are finding that ice cream is becoming a luxury item.

Chicecream (Zhong Xue Gao), a Chinese ice cream brand, set off some controversy last week after its founder Lin Sheng commented on the high price of its products with "take it or leave it." He was referring to the release of the "Ecuadorian pink diamond" popsicle in the fall of 2018, which retailed at 66 yuan (US$10.23), and explained that the statement was edited, that the cost of that particular product was already 40 yuan due to the very expensive imported grapefruit from Japan and rare ruby chocolate from Ecuador in the ingredients.

The controversy stirred heated discussion on Weibo, with numerous consumers speaking about the increasingly expensive price tags of ice creams in general, when they are supposed to be an affordable enjoyment in the summer season. The topic "why ice creams are more expensive" now has 340 million views with 12,000 discussions.

Ice creams are becoming more fashionable, yes, but not without cost. As ice cream brands race to become the next big wanghong (Internet sensation) in order to win sales and public attention, the mega marketing campaigns are transferring the costs back to consumers. 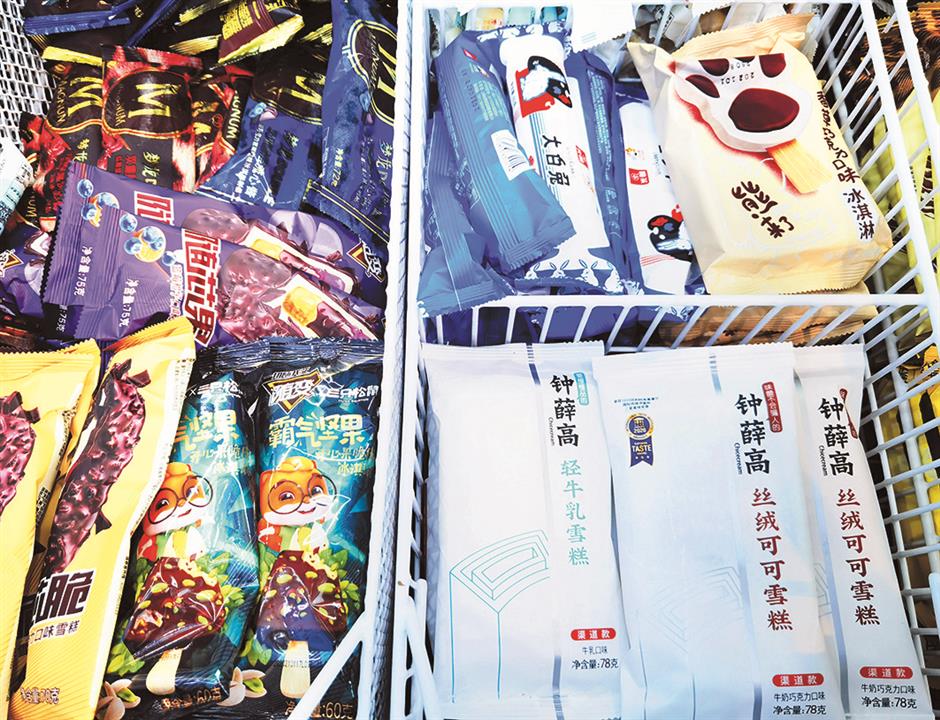 Ice creams are becoming more expensive and items of luxury.

Chicecream's regular ice creams are usually priced between 13 to 25 yuan. Currently the more expensive flavor is strawberry white chocolate (a 75-gram, three-layer popsicle with milk, white chocolate and strawberry) at 22 yuan per piece. Zhongjie1946 is a similar brand in terms of product positioning, style and pricing. Its Belgian chocolate ice cream (80 grams) retails for 32 yuan per piece. That is enough money to buy half a kilo of pork short ribs.

The price of ice cream has been raised to a point when people start to feel that ice cream freedom is slipping away. A Magnum chocolate-covered ice cream (around 9 yuan per piece) used to be a splurge for many people when ice creams were mostly priced around 5 yuan, now it seems like a bargain when a plain milk ice pop can reach 15 yuan.

The increasingly high cost of living and price rises also contributed to the expensive price tags of ice creams in the past several years, as traditional, ordinary products with a long history have also advanced in price. Bright Dairy's good old purple ice cream (zixuegao, a simple chocolate-covered milk ice cream bar) was 18.5 yuan for a box of six 55-gram bars in 2019, now it's 27 yuan for the same product and packaging.

Healthy is another keyword in the 2021 ice cream market, as brands are introducing low-calorie ice cream products to appeal to consumers who are more aware of the nutritional content of the food they eat. There are also ice cream products made with sugar substitutes or artificial sweeteners for people who need to control their blood sugar.

Baxy's low-calorie ice cream product line has a coffee and oat flavored ice cream. A 75-gram cup of the ice cream made with skim milk and coconut milk contains only 87 calories as well as less fat than regular recipes. The chocolate flavor is slightly richer with a calorie count of 89. 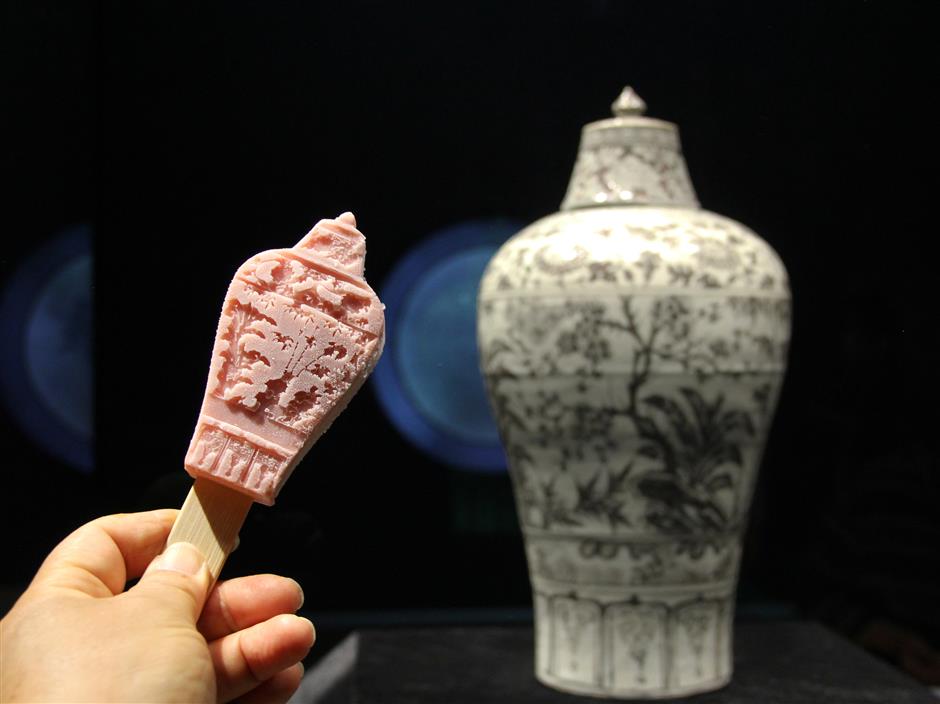 This summer, the trendiest thing to do when visiting a museum, an exhibition or a scenic spot is not to take pictures of the landmark features, but to buy an ice cream.

From the May Day holiday, tourist sites have entered a heated competition of ice creams, launching popsicles that are shaped like local landmarks and iconic treasures. The ice creams in the shape of two millennia-old bronze masks unearthed from the Sanxingdui Ruins launched by the Sanxingdui Museum in Sichuan Province especially stood out in the first wave of ice cream competition. They boasted two flavors – "bronze" which is matcha and "excavation," chocolate.

Other destinations soon joined with their own "cultural" ice creams, and the sales on the shore of Dongting Lake in Yueyang in Hunan Province sold more than 22,000 ice creams in the shape of the ancient building during the five-day holiday in May, priced at 18 yuan per piece (US$2.78).

Visitors were even going to the destinations simply for the creative ice creams and snapping a picture of the uniquely shaped ice cream with the actual landmark as background. The tourist spots and cultural institutes in China have been investing heavily into developing creative cultural products as a means to make extra profit and bring the traditional culture to the younger generation. 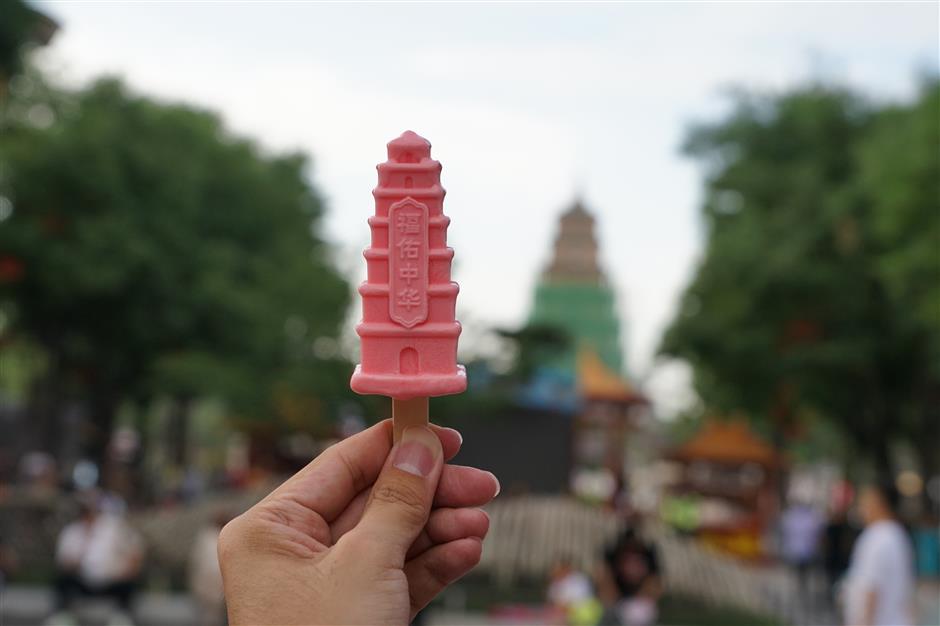 Taking pictures of ice creams shaped like famous landmarks and cultural relics is now a trendy thing to do during traveling.

Shanghai Museum is hosting "The Perpetual Prosperity: Special Exhibition of Donated Ding Vessels to the Shanghai Museum" from June 19 to July 18 in the No.2 Exhibition Hall. Bronze ding vessels were traditionally symbols of the state and the exhibition highlights Da Yu Ding and Da Ke Ding. The Da Yu Ding dates back to the Western Zhou Dynasty (1045BC–771BC) during King Kang's reign, and the Da Ke Ding is from the time of King Xiao's reign.

The museum cafe has launched special ice creams shaped as a Da Ke Ding to complement the exhibition.

Visitor Chan Chen said: "Da Ke Ding is a key highlight of the collection, I first learned about the creative ice creams from the official Weibo of Shanghai Museum and it's a must-try, the ice cream comes in two flavors, chocolate and matcha, for 20 yuan a piece.

They're quite large in size and solid in texture and flavor, we also get to rest in the cafe during the tour, so it's good value for the money, I like the matcha flavor more because visually it's closer to the bronze ding, for fans of ancient bronzes, don't miss out on the ice pops." She purchased two Da Ke Ding ice creams.