My mother, Susanne, gives me a blank stare after I tell her what I had eaten for dinner the night before at my boyfriend James' house. "You ate what … fish with eyes ... that can't be," she says. Yes indeed, I had eaten fish that was served with the eyes, fins, mouth, nostrils, and everything else – the real deal. The famous Chinese dish is called 小黄鱼, which translates to "little yellow croaker" or "small yellow croaker."

This fish is widely available in Shanghai and other parts of China and isn't expensive. James' mom, Julia, is a phenomenal cook, and cooked the fish with eyes that I ate. Julia explained to me the steps that go into preparing the dish. The fish is first cleaned, patted dry and then placed on a hot pan that has a small amount of oil in it. Julia explains to me that the fish is cooked on both sides, and "when you shake the pan, if the fish moves, then it is done." The fish itself is only coated with a bit of salt. The flavor comes predominantly from the sweet and sour sauce made in a wok after the fish is cooked. Julia says for the sauce you need to "stir until it looks like syrup" and that I should know how to stir well because "it's like how you have to stir a lot when you make granola." The fish is served in a deep bowl, where the cooked fish is first added and then the sauce is poured over it. The color of the fish is yellow, gray and brown and is eaten warm.

My childhood was almost entirely lived in China. I have lived in China ever since I was 5 weeks old, first in Beijing for six-and-a-half years and then in Shanghai for 12 years. One would assume my Chinese would be that of a native speaker, and that I have tried hundreds of Chinese recipes. I am embarrassed to say that my Chinese speaking level is beginner at best, and that in the past I have not fully immersed myself in trying Chinese cuisine. I have, however, been more open to trying new dishes. My Chinese speaking could still use a lot of work, but let's focus on the food for now.

I am familiar with many Chinese dishes, all of which are pretty basic. I often indulge in sautéed broccoli, pan fried beans, cooked spinach, sweet and sour ribs, rice, noodles and scallion pancakes. I often eat at James' house, where his mom, Julia, cooks delicious Chinese food. 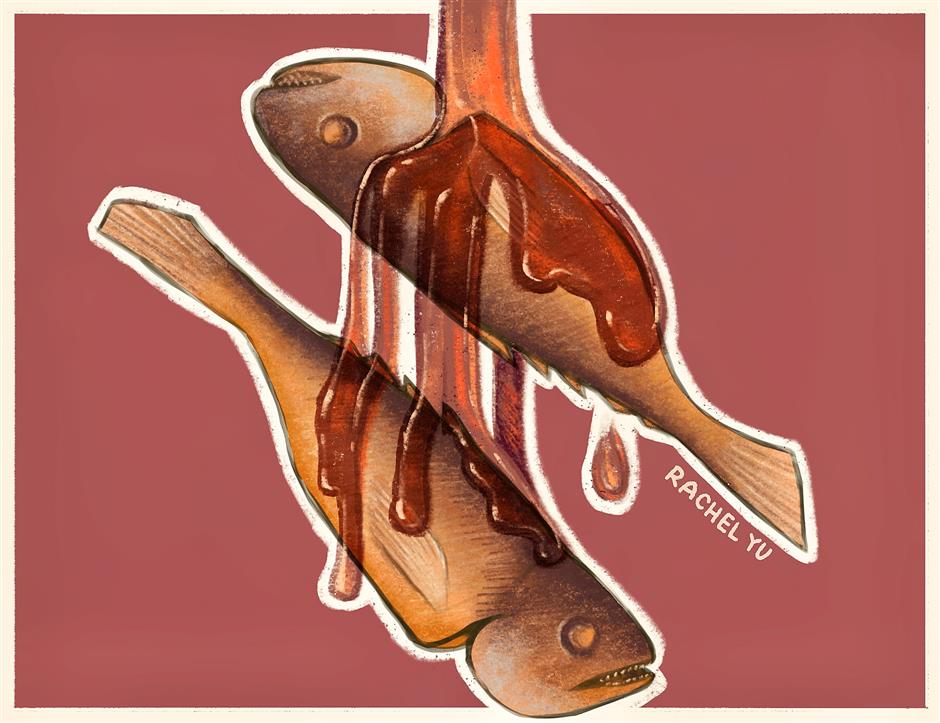 Every day before we dig into the food, Julia takes a picture of her masterpiece and sends it to her high school friends via a group chat on WeChat. Julia told me how her friends have been able to pick up on which days I am home for dinner and which days I am not "based on what food is on the table." I am hoping I can change that, and that I can go unnoticed. I would love it if her friends were unsure if I am eating there or not. The day I ate the fish with eyes, Julia told me her friends were shocked to hear I was eating at their home that day. I hope to surprise them more by trying more dishes.

Being immersed in two different cultures has taught me the differences between the food eaten in Chinese and Western cultures. What I have learned is most likely not a surprise, but that Chinese food is bursting with flavor, as many spices and sauces are added. On the other hand, I found that Western food is often bland by comparison, because there are not as many spices and sauces used in the cooking process. A perfect example of the difference in spices is how there is a bottle of "老干妈" in the refrigerator at my house. James uses this spicy sauce on some of the food I serve, which he enjoys but sometimes finds himself needing "a little kick" to it, as he says.

The common dishes in my home consist of bread, potatoes, pasta, chicken and salmon. You guessed it, Western food, which is why my Danish mother found it shocking that I would dare to take on such a foreign food. To lighten the conversation, I jokingly told mom, "you should try the fish sometime!" She laughed and said, "maybe some other time!" I knew very well that my parents preferred fillet style when it comes to  fish. This is because being Danish, they grew up eating fillets and were never served an entire fish. I told my mom she should "go outside of her comfort zone and try something new." She responded with a smile, "I prefer eating fish that is not staring back at me while I eat it."

Later in the week, I returned to James' house. At the dinner table I brought up the reaction from my parents regarding the fish we ate last time. James' dad tells me he has noticed great strides in my willingness to try new foods, especially Chinese cuisine.

"You are in the top 2 percent of Westerners in China when it comes to the amount of Chinese foods you have eaten," he said.

Reflecting upon mom's reaction, I recall how just six months ago the thought of eating fish repulsed me, causing me to lose my appetite. I grew up having a pretty strong dislike for fish and would always refuse to eat it.

The closest thing to fish I would willingly eat was fish and chips, where the fish was 85 percent covered in batter and so deep fried I could hardly taste the fish. On the rare occasions I would eat fish and chips, I was more interested in the chips. When it came to the fish, I would nibble my way around the crunchy corners.

How could I go from being repulsed by fish to eating it nearly every day in the span of six short months? The key is having a good chef to cook the fish. Because Julia is an excellent cook, she made it easy for me to like it. Also, James has always encouraged me to expand my palate and explore more foods in his culture.

What food will I fall in love with next and no longer be repulsed by? I have become accustomed to eating fish served with the eyes still intact. Therefore, thanks to my newfound willingness to try different kinds of Chinese cuisine, I have no doubt I will soon find more dishes to get me closer to that 1 percent of Westerners in China.