The carb-lovers' paradise: 'heaven of carbohydrates' in Shaanxi

Xi'an, the capital of Shaanxi Province, is the host city of China's 14th National Games which close tomorrow. It's one of the country's most cultural and historically enriched cities, and a top tourist destination for epicurean journeys.

The cuisine of Shaanxi Province is of strong and distinct character – the "heaven of carbohydrates" with near infinite possibilities for staple delights, along with tantalizing and hearty meat feasts and the addictive chili oil of which one can never get enough.

This week, we'll take a journey through Shaanxi cuisine to explore the unique culinary culture and flavors, one of China's most ancient cuisines. 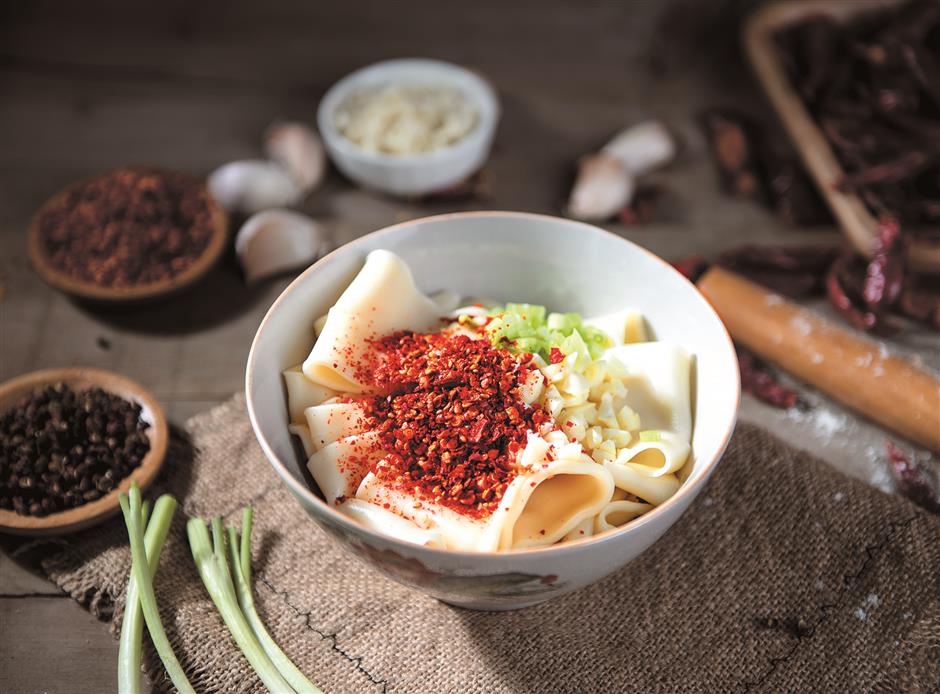 Shaanxi cuisine is known for dazzling noodle and staple dishes.

In the age of carb consciousness, Shaanxi has an eccentric presence – there's no way of taking away the noodles, buns and breads from a Shaanxi local's life. It's a place where you'll see people pairing one staple dish with another. Small huntun with soup is almost considered a meal here in the Yangtze River Delta, but it's regarded "something to drink" to serve with other staples in Shaanxi, much like a beverage.

Biangbiangmian is an iconic dry noodle dish that uses wide and thick hand-pulled noodles in the shape of a belt. It's simpler than the pulling technique used in making Lanzhou's famous beef noodle, which is done by pulling the ox tongue-shaped dough strips at even speed with gentle strength and quite easy to do in the home kitchen.

The soul of biangbiangmian, however, is the sizzling chili oil splashed on top of the cooked noodles and poached vegetables. This chili oil known as youpo lazi is the secret to the local spicy cuisine. The level of spiciness is much milder than the spicy cuisines of Sichuan, Hunan and Guizhou, boasting stronger aroma that can instantly fill up a room.

The chili oil is made of ground chilis and spices, including Sichuan peppercorn, cinnamon, star anise and the Thirteen Spices, as well as toasted white sesame seeds that bring out the fragrance. After preparing all the ingredients in a small bowl, heat up a saucepan of oil to about 80 percent hot and splash some over the chilis, add the sesame seeds and pour the rest of the oil. The youpo lazi is best when it's fresh, as the aroma may start to fade away after a few days.

Locals add youpo lazi and vinegar into all types of staple noodle dishes to elevate the flavor, as well as with meat and vegetable dishes. 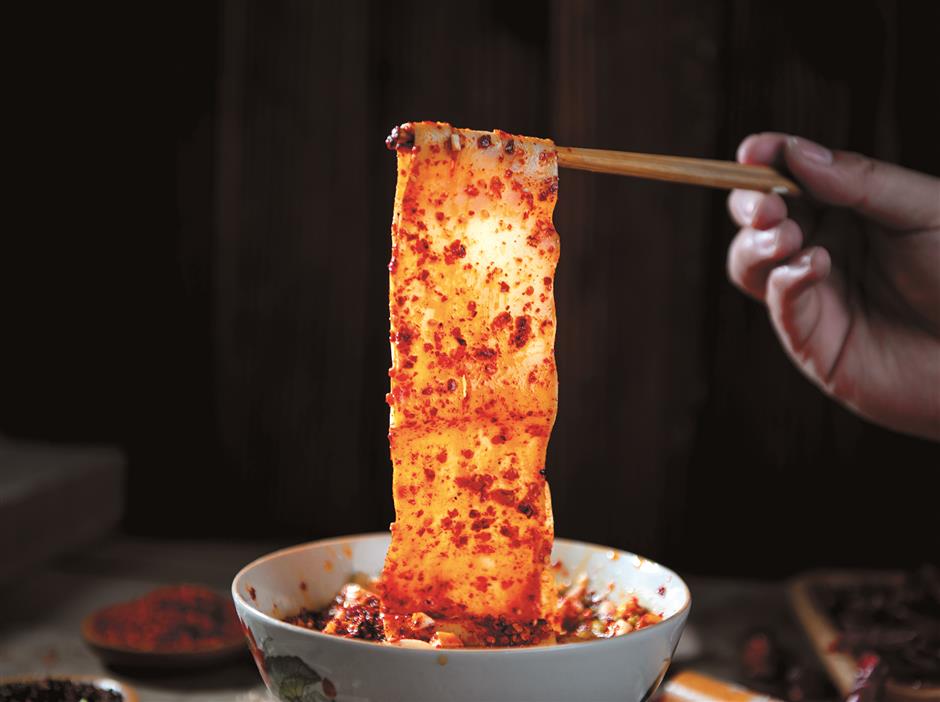 Qiaomaiheluo is a unique buckwheat noodle dish made with the traditional pressing technique. Instead of rolling out the dough with a rolling pin into a thin sheet and then cutting into it into thin shreds, this recipe presses the dough through a presser set above a large wok filled with boiling water. The cooked noodles are usually served with flavorful soupy toppings, with meaty choices like mutton soup and vegan options like stir-fried tomatoes and potatoes with extra broth.

The Qishan saozimian – saozi meaning the spicy soup topping that accompanies noodles – is a noodle dish of rich and strong flavor. The noodles are very thin and made by rolling dough into paper-thin sheets and finely cutting them. The broth is special with a distinct sour flavor. Ingredients used include minced pork and vegetables cut in small pieces. The dish must feature five colors: red from carrots, green from garlic sprouts, black from wood ear mushrooms, yellow from eggs and white from tofu.

People in Shaanxi consume an enormous amount of steamed and baked buns and breads. One fresh and hot steamed bun topped with a generous spread of sizzling chili oil is a delicacy that locals may not give up for a juicy, meaty burger.

Flour buns and breads are not just for everyday meals. There's also the figure bun tradition that was recognized as an intangible cultural heritage, where more complicated dough-sculpting techniques are used to create grand buns of multiple layers, vibrant colors, flavorful fillings and vivid shapes. 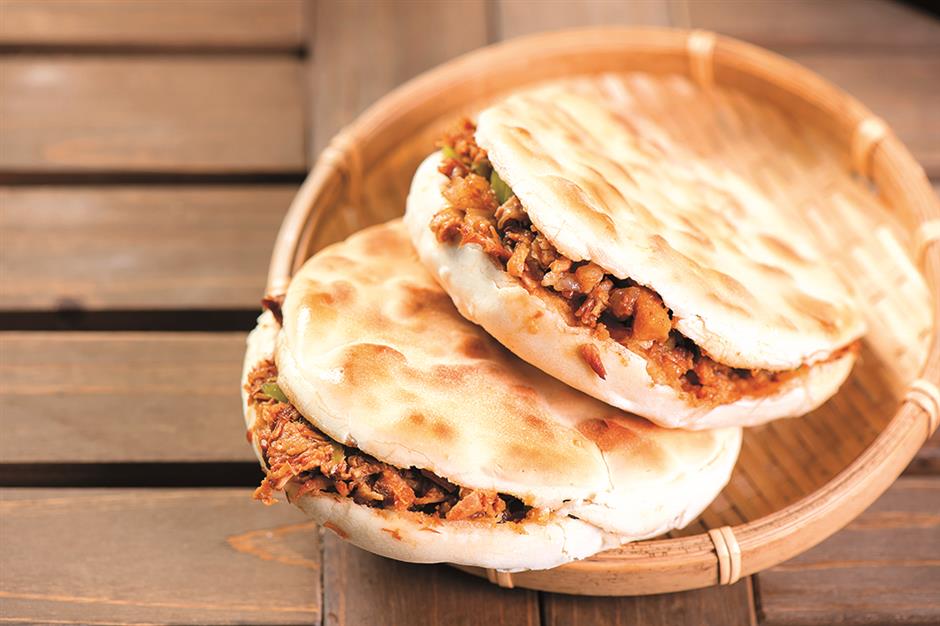 Roujiamo needs no further introduction, as it's the Chinese-style burger with a loyal following around the world – a simple food involving complicated craftsmanship. The bun known as baijimo must be hand-made and served hot. The soft, baked flatbread with thin, crunchy skin is made of semi-leavened dough, with a denser, firmer texture. Its color must be white on the outer edge with golden gradients in the middle.

The filling is the succulent stewed pork known as lazhirou, usually made with rich pork belly cuts with the skin on, and stewed for hours with more than a dozen spices and seasonings to achieve a meat texture that breaks up easily.

To prepare roujiamo, pork is chopped into smaller piece while still retaining some of the meaty texture, then a bit of rich stock is added to provide moisture. Beef and lamb can also be used as fillings, and the vegetarian version uses potato and carrot shreds, green peppers, bean sprouts, spiced stewed eggs and pressed seasoned bean curds, which many locals favor over meat versions.

Liangpi, a cold noodle dish served with spicy dressing and vegetable toppings, is the perfect companion to roujiamo. It is made with the starchy water that comes from "washing and rinsing" flour dough. Then on a baking sheet or flat metal plate, the batter that thinly covers the entire pan is steamed or boiled for one minute. The noodles can be made with rice or rice flour. Liangpi is served with youpo lazi and a standard sauce of light soy sauce, aged vinegar, salt, garlic paste and sesame oil.

Stone bread is an ancient snack referred to as a living fossil. It's made by baking dough (consisting of oil, flour, eggs and salt) on hot stones. The bread is quite thin with an uneven surface and very dry texture. 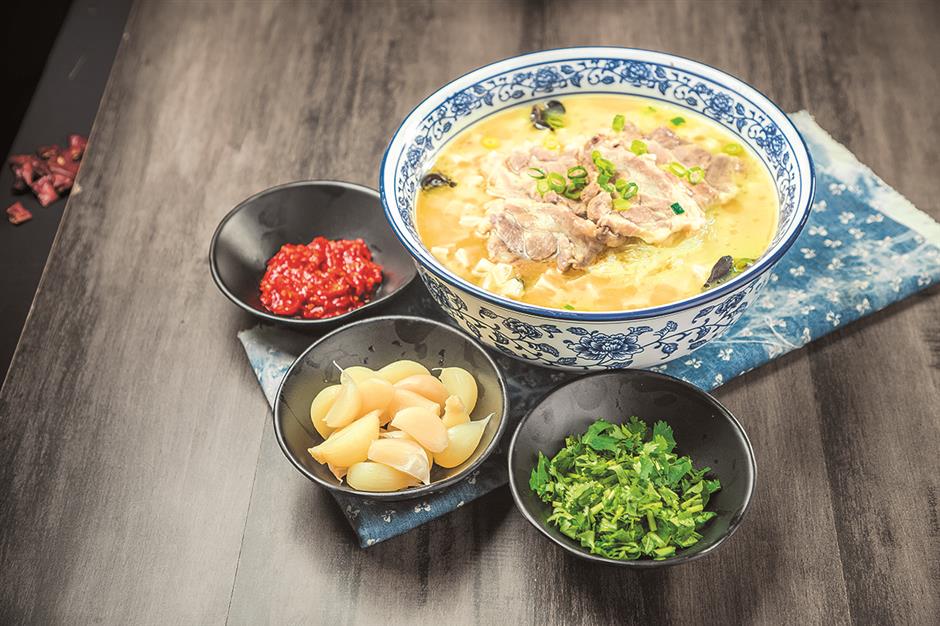 Meat dishes of generous portions, including pork, beef, mutton and lamb, are another highlight of Shaanxi cuisine.

Basin mutton is a traditional specialty in some parts of Shaanxi. It's an umami mutton soup served hot in large bowls the size of basins that must include lean and fatty cuts of stewed mutton. Some people also add a serving of offal, and the dish is all about enjoying the original flavor of the broth and meat.

Plain baked flatbread known as "crescent bread" is usually served with basin mutton, and there are two ways of eating it. The first is opening the flatbread to create a pocket (it's quite hollow in the center), and then stuffing it with mutton meat to create a sandwich – don't forget to add a spoonful of sizzling youpo lazi. The second way is breaking it into smaller pieces and soaking it in flavorful soup.

Crescent flatbread is different from baijimo, as it's made of leavened dough. Another Shaanxi mutton soup icon is the paomo dish, which is made by boiling tiny bits of baijimo in mutton soup with thin vermicelli.

As Shaanxi is a northwestern province, roasted lamb legs, whole lambs and boiled mutton are popular local dishes as well.

Calabash chicken, or huluji, is traditional Shaanxi-style fried chicken. It's said to have originated during the Tang Dynasty (AD 618-907). Rather than frying the chicken directly like most fried chicken dishes, huluji is much more complicated and takes longer. 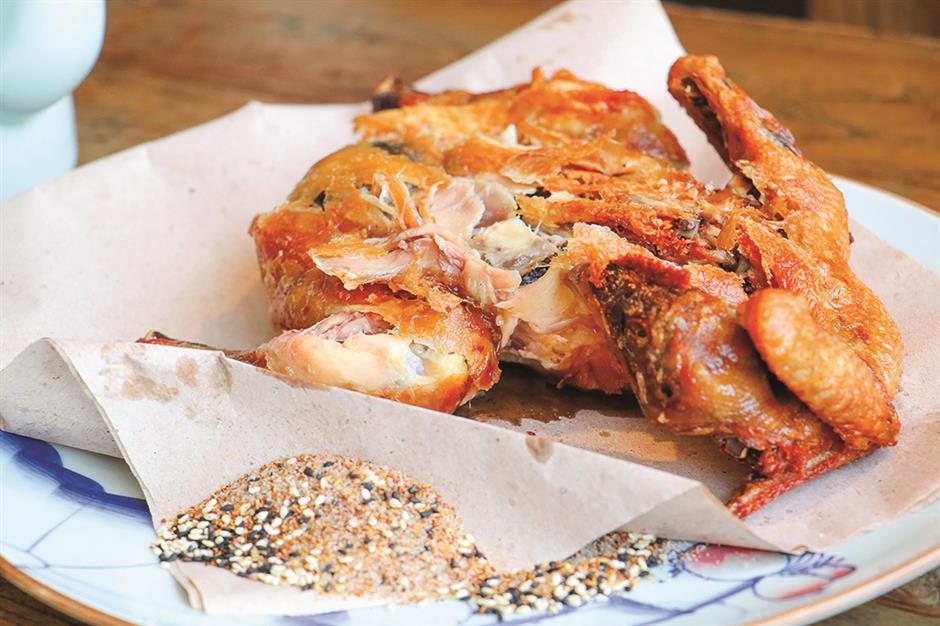 The first thing to do is remove all the bloody residue from the fresh chicken in a thorough wash and rinse, then tie it up tightly with thick rope to secure the chicken's shape and prevent it from falling apart later.

Boil the chicken in water with leeks, ginger, salt, peppercorn, bay leaves, star anise, cinnamon and black cardamom for about an hour so the rich flavors can infuse into the meat. Then, along with the brine from the boiled chicken, steam it for at least 30 minutes so the meat becomes even softer and more tender.

The final step is deep frying. Place the chicken in a large strainer and lower it into the oil that's been heated to 80 percent hot. Then take a ladle and cover the chicken with the oil. The chicken is ready to serve when the color becomes golden and the skin is crispy.

The Shaanxi-style fried chicken is usually served in a calabash-shaped dish with a dry seasoning mix of chili powder, salt, peppercorn powder and cumin.