As one of China's eight major cuisines, Min isn't as prominent as Cantonese, Sichuan and Hunan. It's influenced by the region's coastal location and mountainous terrain, forming a unique blend of flavors from the sea and woodlands.

Shanghai has several high-quality Fujian restaurants, including upscale establishments such as Fujian Banquet in Xintiandi and Meet the Bund, which has one Michelin star, as well as snack shops like the Lu Ding Ji franchise that specializes in treats like Fuding pork slices and "meat swallows." 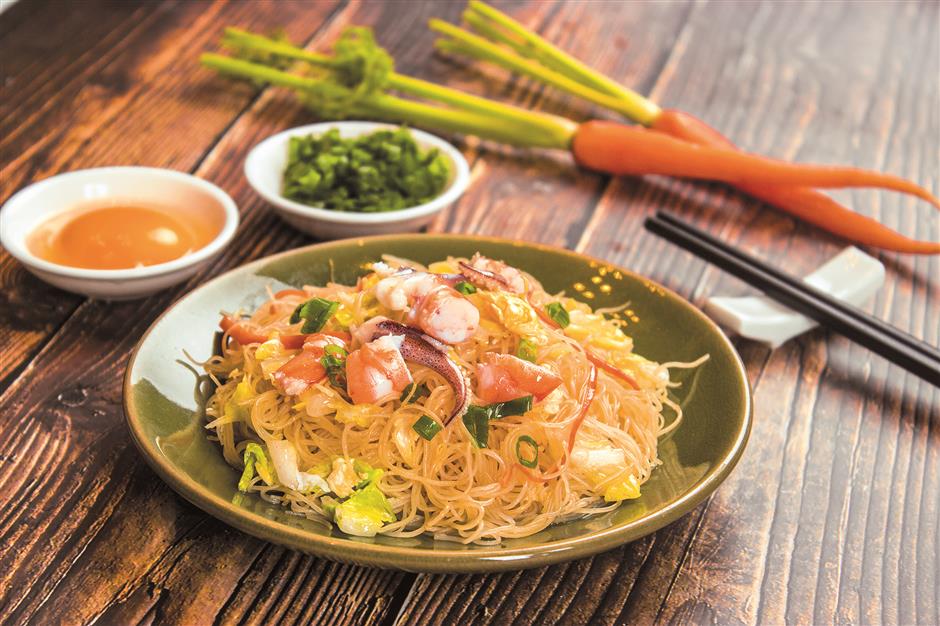 Fujian cuisine is known for using ingredients from the sea and woodlands, with light and umami flavors.

From the sea to the woodland

Fujian Province's unique location provides the region's cuisine with an abundance of fresh ingredients, and the local culinary culture excels in creating "surf and turf" dishes.

Wok-fried crunchy duo is an exciting recipes, with stir-fried slices of pork kidney and jellyfish – a great example of combining land and sea flavors. The key to the dish is maintaining the crunchy texture of both ingredients. Its intense flavors come from blending onions, garlic, green chili, vinegar and other ingredients.

A special feature of the dish is the stir-fry served over a bed of deep-fried steamed bun cubes. The bun cubes are especially tasty when they soak up the flavorful sauce while maintaining part of the crunchy texture.

A traditional signature dish in Fuzhou, the provincial capital, is lychee meat, which doesn't include lychee fruit. The dish is a sweet-and-sour-flavored braised pork creation, seasoned with tomato sauce and sugar. The pork cubes are fried in advance, then tossed into the thick sauce, resulting in a glistening finish. Potatoes can be fried and braised with the pork as well. 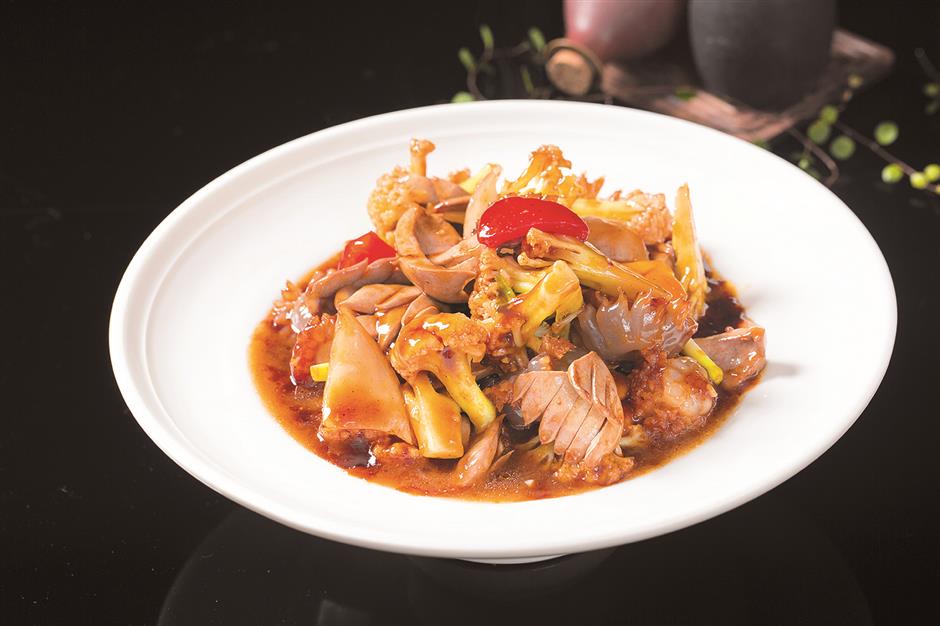 A secret weapon of Fujian cuisine is red vinasse. Known as hongzao in Chinese, red vinasse is the byproduct of rice wine fermented with red yeast rice. It's a highly nutritious condiment and widely used in Fujian cuisine for its unique flavor, as well as its wine-like fragrance, sour taste and visually appealing color.

Red vinasse is commonly used in meat dishes, due to its unique sour flavor, which balances the richness of different kinds of meat, such as chicken and pork. Some people use red vinasse to cook boiled eggs to create a beautiful marbling effect. After preparing hard-boiled eggs, crack the shells but don't remove them. Next, boil the eggs in a brine seasoned with ginger, salt, garlic, rice wine, sugar, light soy sauce and red vinasse. Both the color and flavor of the brine will seep into the eggs. Steeping the eggs in the liquid overnight enhances the color and flavor.

The city of Fuding produces a special variety of taro known as Fuding taro, which is oval and large, weighing an average of 1.5 to 2.5 kilos. A classic Fujian dessert dish is made of steamed Fuding taro mixed with lard and sugar for a rich and sweet flavor. The taro paste is topped with nuts and bits of jujube. 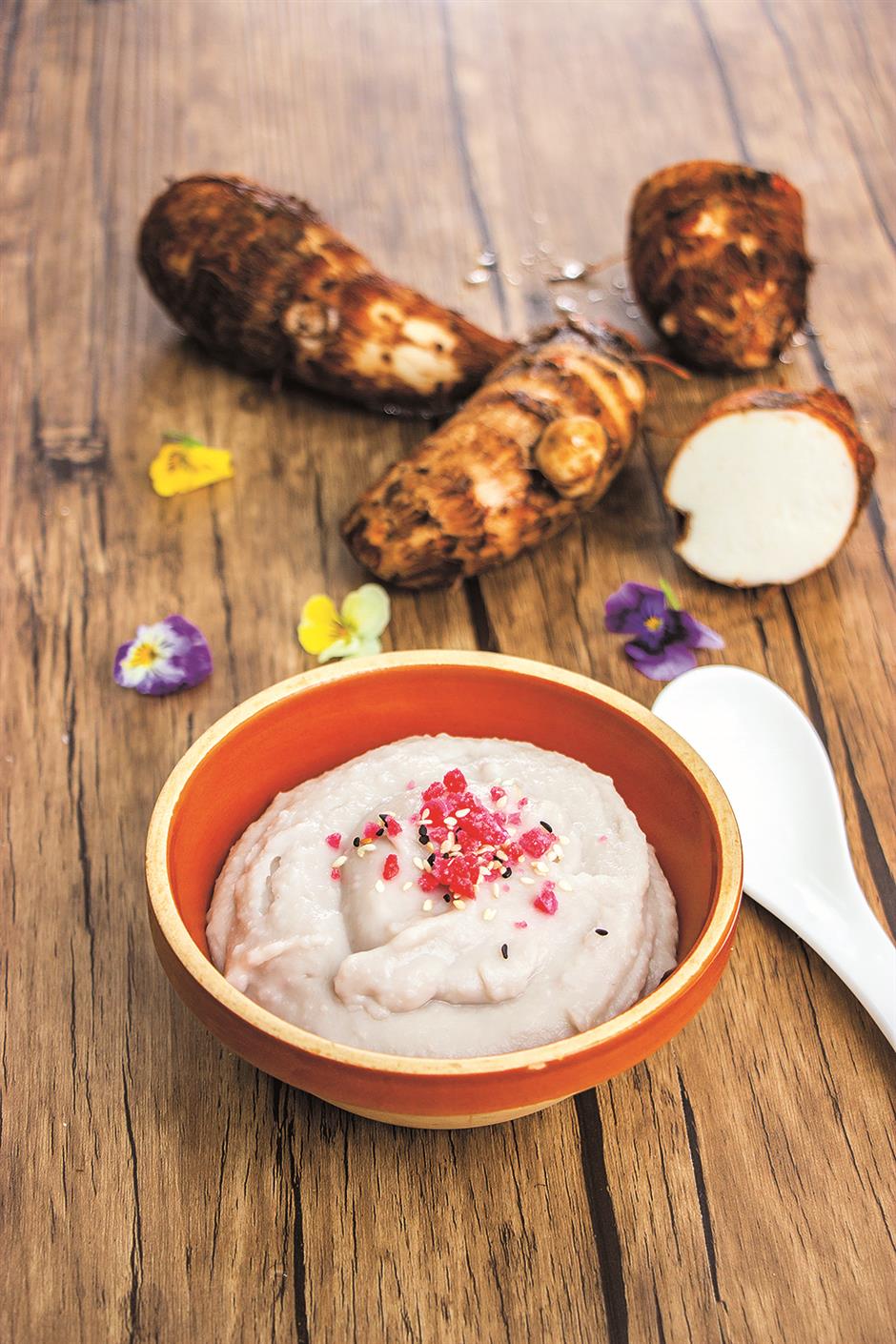 Like Cantonese cuisine, there's a soup tradition in Fujian culinary culture, where soup, generally lightly flavored, plays an important role in daily life. The crown jewel of Fujian cuisine, fotiaoqiang ("Buddha jumps over the wall" or "Buddha's temptation") is a sumptuous and extravagant soup often served as the main dish at Chinese banquets.

The name fotiaoqiang is pronounced similarly to fushouquan (good fortune, prosperity, complete) in the Fuzhou dialect. The dish dates back to the Qing Dynasty (1644-1911). Created by chef Zheng Chunfa, it was served at a banquet in San You Zhai restaurant in Fuzhou (which is now called Ju Chun Yuan) and impressed the guests so much that one remarked: "the aroma of meat floats around the neighborhood as the jar opens, making Buddha abandon Zen and jump over the wall."

It takes days to make fotiaoqiang, because many of the premium ingredients require a meticulous reconstitution process. 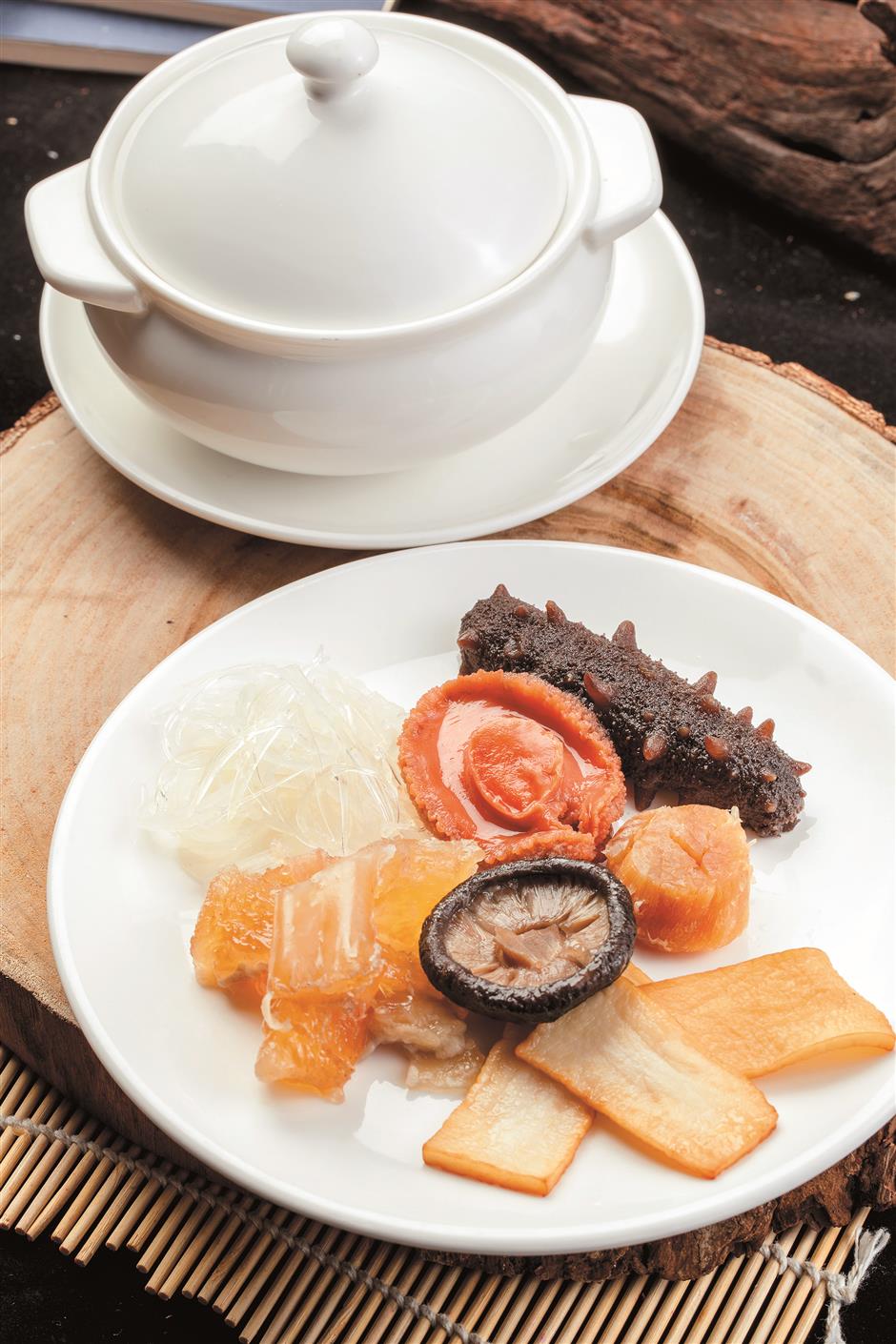 For example, sea cucumbers are soaked in water for two days to grow larger and take on a softer surface. They're then cut open to remove unwanted parts, and the vein-like tendons are sliced into three or four parts, which otherwise would inhibit them from growing larger. The cucumbers are then boiled in purified water and immersed in a refrigerator ice bath for two days, with the water changed daily. This process gives them a bouncy texture and a subtle taste of seafood.

For fish maw, the bladder from fish like croaker, the reconstitution calls for the use of oil instead of water – soaking dried fish maw in warm oil until it softens, and then frying it over low heat while pressing it down and fully immersing it in the oil. The complicated process must be monitored constantly to ensure the right temperature, and a successfully fried fish maw should have sponge-like texture on the cross section, after which it's soaked in hot water to soften.

The other ingredients in fotiaoqiang also require a lot of hard work: the fresh meat is poached to remove the bloody residue, the cured ham is steamed, and everything together with the mushrooms and bamboo shoots are stewed with rice wine for hours to make a pot of rich broth base.

After every ingredient is prepared accordingly, it still takes hours to simmer the soup while changing the temperature to adjust the different cooking times of various ingredients. 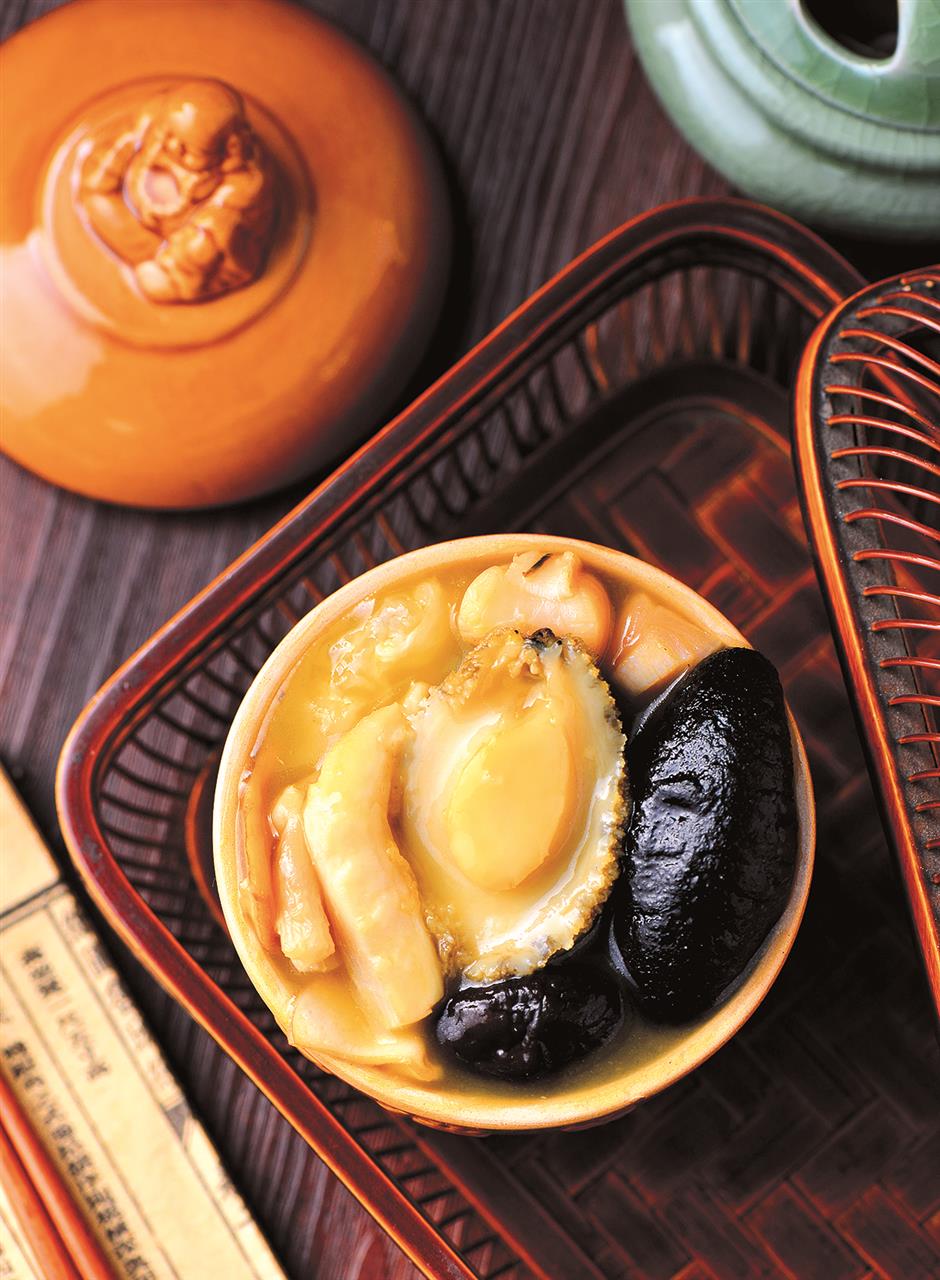 Fotiaoqiang – one of the most luxurious soups

Oyster omelet is a popular Fujian dish, especially in the city of Xiamen. It's an indulgent recipe that pan-fries eggs together with fresh oysters, scallions, sweet potato starch and a dash of vegetables like carrots. Served sizzling hot, the oyster omelet can be enjoyed with a sauce on the side for additional sweet or spicy flavors. It's one of the dishes that tests a person's Fujian cooking skills, and is also popular in the Chaoshan area of Guangdong Province.

Fuzhou fish balls is an umami soup made of fish balls with minced pork or shrimp filling. The "fish wrapper" is a blend of sweet potato starch and minced fish. It's smooth, tender and evenly textured, while the filling is on the rich side. The soup is usually light and seasoned with salt and chopped scallions, because the flavor from boiling the fish balls is already quite umami and refreshing. 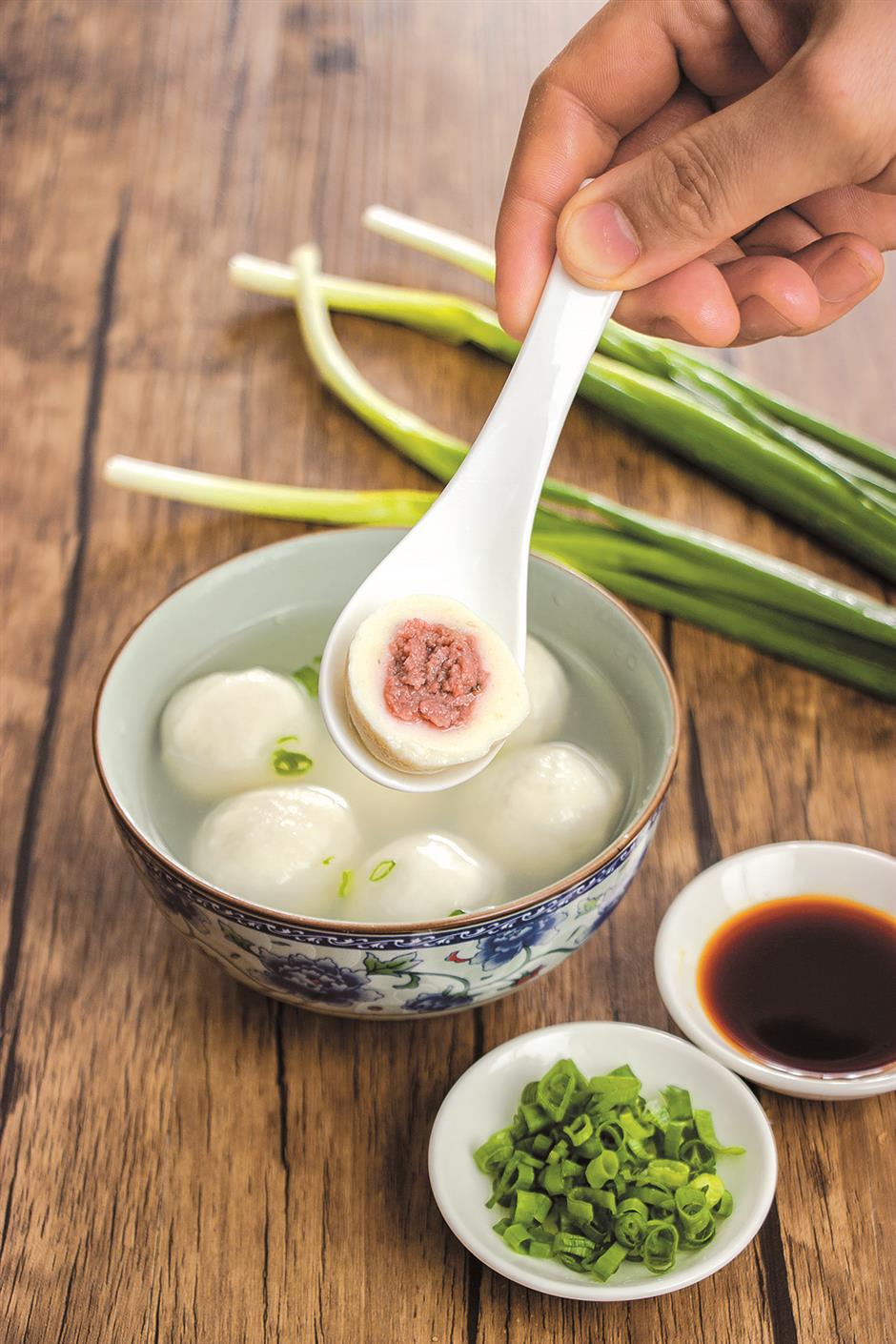 Fuding pork slices is another snack dish named after a city in Ningde, Fujian. It's also a comforting warm soup dish that's perfect for the season.

The pork slices are special – made with lean pork meat, preferably a cut from the hind leg and sweet potato starch. The ratio of meat to starch is about 1 to 0.7. The fresh, lean pork is first sliced into small strips so they can be easily pounded into a mince. Scallions and salt are added to provide seasoning. The next step is rubbing the pork hard with both hands while adding a little bit of baking soda and water until the meat paste is sticky. Starch is then added to the pork mince, followed by another round of rubbing until all the starch is well mixed into the pork.

Boil a large pot of water and pull small pieces of the mince and starch mix to cook the pork for a few minutes. The dish is ready when the pork floats to the surface. The soup is then flavored with chili, white pepper, nori, cilantro, ginger and vinegar. 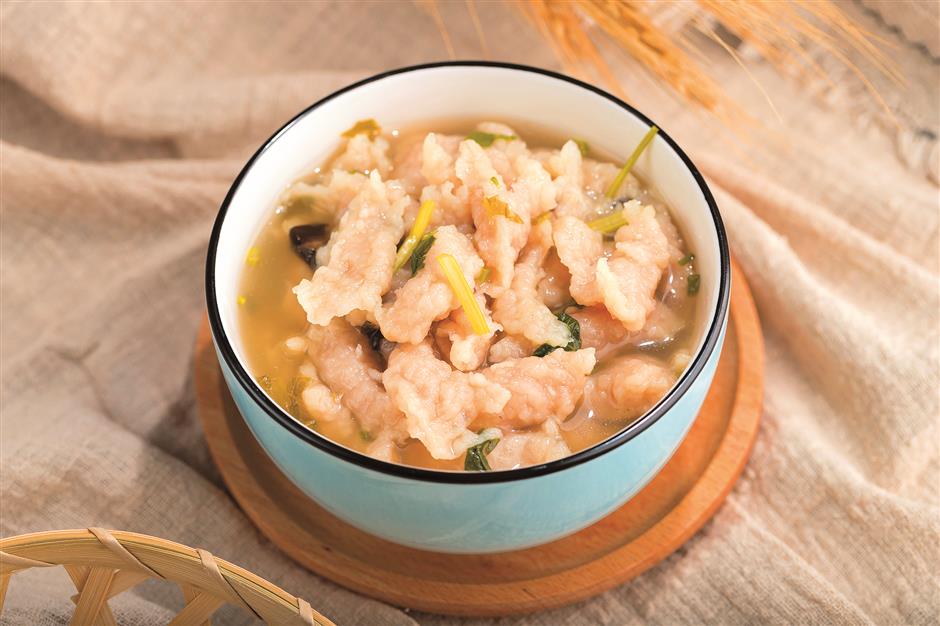 Fujian-style "meat swallow," or rouyan, is a special kind of huntun that uses a wrapper made of pork and sweet potato starch. The technique used to make the unique wrapper is pounding the mince by hand until it achieves tenacity. It's an integral dish in the culinary tradition of Fuzhou that people make for festivals, celebrations and gatherings, hence the phrase "no meat swallow, no feast; no meat swallow, no New Year."

Lastly, when speaking of Fujian snacks, the franchise Shaxian Delicacies must be mentioned. The typical and affordable menu includes noodles/fried rice, dumplings, soups and braised meats/tofu. The eateries can be found across China. 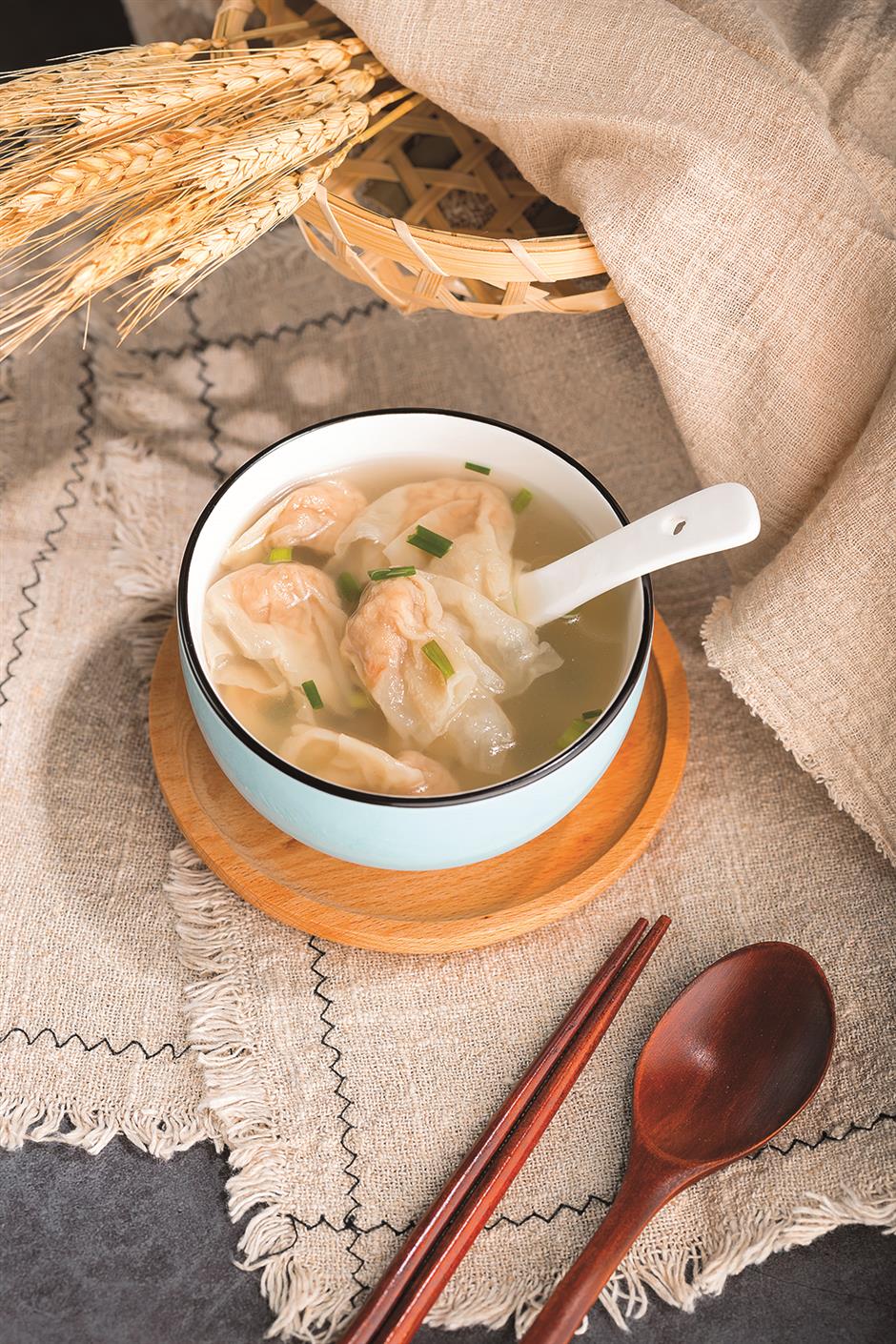 A simple, quick yet fulfilling dish that's perfect for lunch, dinner and late-night cravings. Try pairing it with chilled Prosecco or beer.

White pepper and salt to taste

1. Prepare the fresh oysters – it's best to pick the smaller ones – and thoroughly rinse them to remove all the dirt and tiny bits of shells.

2. Bring a pot of water to boil, briefly poach the oysters, then turn off the heat as soon as the pot boils again. Take out the oysters and drain the excess water, set it aside and let it cool to room temperature.

3. In a large bowl, mix the sweet potato starch, light soy sauce and a pinch of salt into a sauce, add the eggs and mix well.

4. Finely chop the fresh scallions and mix them into the eggs and sauce. Pour in the poached oysters and mix well again.

5. Heat a non-stick pan, add some oil and when it starts to sizzle, pour in the oyster omelet mixture and spread it evenly in the pan. When it's almost coagulated, tilt and turn the pan so the bottom of the omelet colors evenly.

6. Flip the oyster omelet when the edges become golden in color using a spatula, cook the other side and turn off the heat. Serve the dish hot, with optional sauce or pickles on the side to balance the flavors. 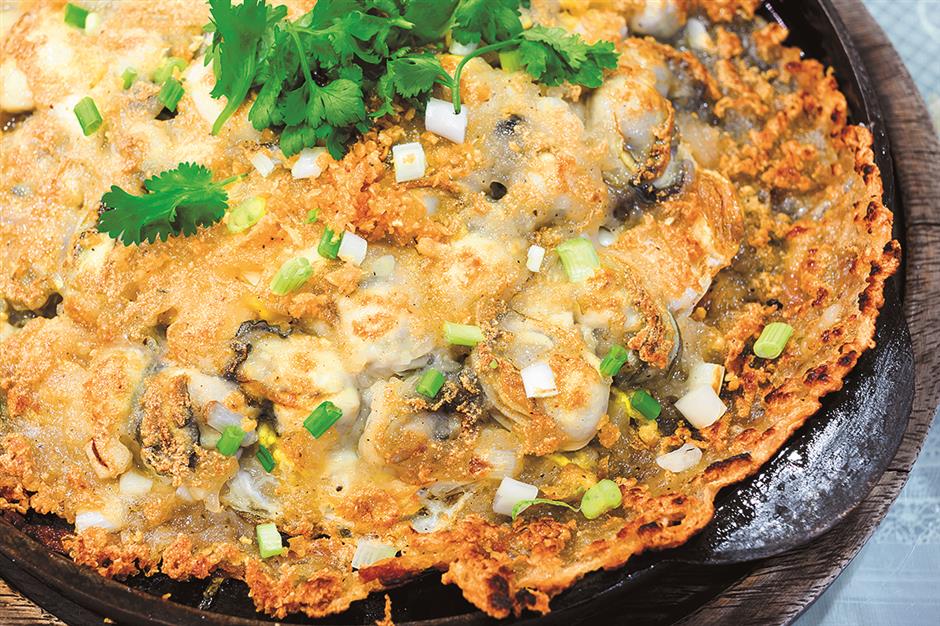