The dude even had a decent glass and was holding it properly. The viral picture of a man standing in line for a COVID-19 test with glass of wine in hand gives us a new perspective on the ordeal we're all going through. Quarantine challenges our freedom-loving human spirits, but we do have ways to stylishly persevere. Reading, singing, painting, cooking and exercising are all helpful and so is a glass of fine wine or spirits.

Before we delve into wine and spirits appreciation during quarantine, let's delve back in history to the look at the etymology and origin of quarantine. First we should differentiate between quarantine and isolation.

Medically speaking, quarantine separates one or more persons who may have been exposed to illness but are symptomless. Isolation on the other hand separates persons already ill from others. The term quarantine has roots in the Italian words: quarantena meaning quarantine of ships and quaranta that means forty. History tells us why.

In the mid-14th century the Black Death descended upon Europe and killed as many as a third of the the total population. Authorities at all levels of governance took extreme measures to try and control the pandemic but many were based on superstition and even magic. However, in 1377 in the Venice-contorted port of present-day Dubrovnik, Croatia local officials started to implant trentino, a period of 30 days' isolation for arriving sailors. Over succeeding years this practice was extended to 40 days and implemented in other Mediterranean ports.

Plagues like the Black Death periodically broke out in all ancient cultures and through trials and tribulations there gradually developed a consensus about the need and duration of quarantines. The Hippocrates School in 5th-century-BC Greece scientifically identified various diseases and documented their contagion and incubation periods. For plagues 40 days was determined to be the maximum incubation period of transmissible diseases as well as a medical turning point for being able to differentiate dangerous and less severe diseases.

Today in Shanghai, we're far more scientific with well-calculated timeframes and methods of quarantine. Thank God its no longer 40 days! And in the spirit of the wine-glass guy in line for his test, let's all try and make the best of this challenging situation. Central Italy produces a stylish and comforting red wine that perfectly fits the bill. 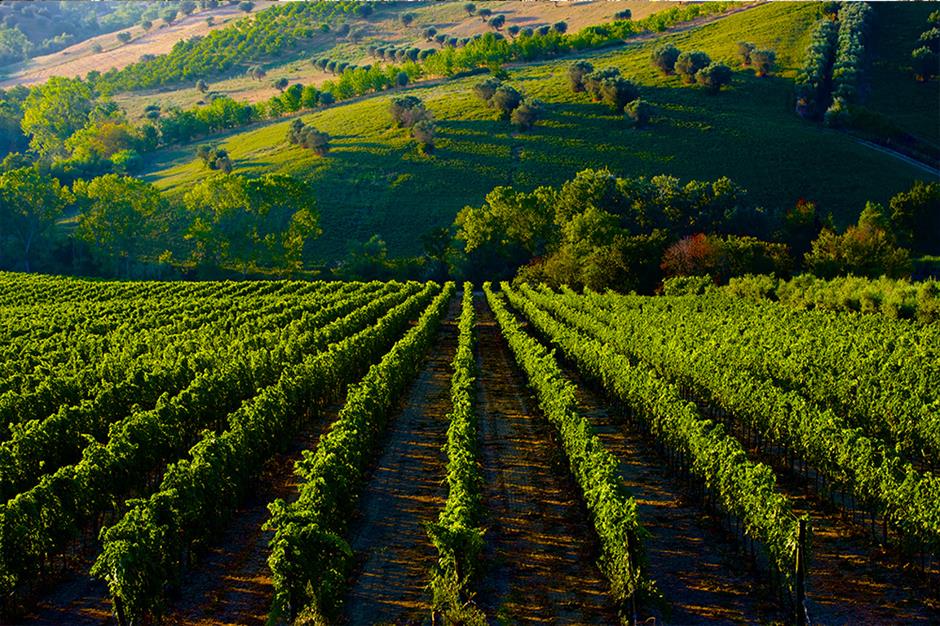 Some three-hour-or-so drive east from Rome is one of Italy's most overlooked premium winemaking regions. Abruzzo is a resplendently beautiful region with rugged mountainous terrain and a long beautiful coastline with unspoiled and unpopulated beaches. The hillside vineyards of the region benefit from proximity to the Adriatic Sea and a hot dry Mediterranean climate.

Wines have been made in Abruzzo since the 6th century BC. The Etruscans were the first peoples to cultivate vines and make wines in Abruzzo as well as the neighboring region of Umbria and also Tuscany. The Etruscan empire only lasted about three centuries but it played a primary role in establishing central Italy as a winemaking and epicurean paradise.

The first documented wine from Abruzzo was a Moscato sweet wine enjoyed in pre-Roman times and few centuries after, the region became known for exceptional red wines. Roman poets, Renaissance painters and Medieval Popes all gained inspiration from the welcoming red wines of Abruzzo.

Despite the shared name, the grape has no connection to the Sangiovese-based Tuscan wine Vino Nobile di Montepulciano. This variety must comprise at least 85 percent of Montepulciano d'Abruzzo wines with up to 15 percent Sangiovese also allowed. Riserva wines have at least three years of aging with a minimum six months in oak.

Stylistically, Montepulciano d'Abruzzo wines tend to be deeply colored, fruity and concentrated wines with pleasant round and generous textures and smooth tannins. They are also eminently affordable. These unassuming opulence of Montepulciano red wines make them some of Italy's most comforting and pleasing red wines, a perfect nectar to assuage the stress of confinement during quarantine.

One of my go-to Multipulciano red wines is made by Gran Sasso. Their Alta Quoto Montepulciano d'Abruzzo Colline Teramane DOCG wine features a broodingly dark ruby wine with purplish tones, lively and fruity nose cock full of red berries and plums, and a weighty and soft tannic palate with good persistence.

The voluminous and accommodating nature of Montepulciano d'Abruzzo wines make them ideal partners for many kinds of cheeses and meats. Good partners include easy-to-cook and quarantine-friendly dishes like pasta with Bolognese, Carbonara and pesto sauces and BBQ chicken or pork ribs.

During these trying times, I invite all my fellow Shanghai residents to look on the brighter side of things and enjoy the friendly and comforting wines of Montepulciano D'Abruzzo.