Old and new meld in a charming garden setting 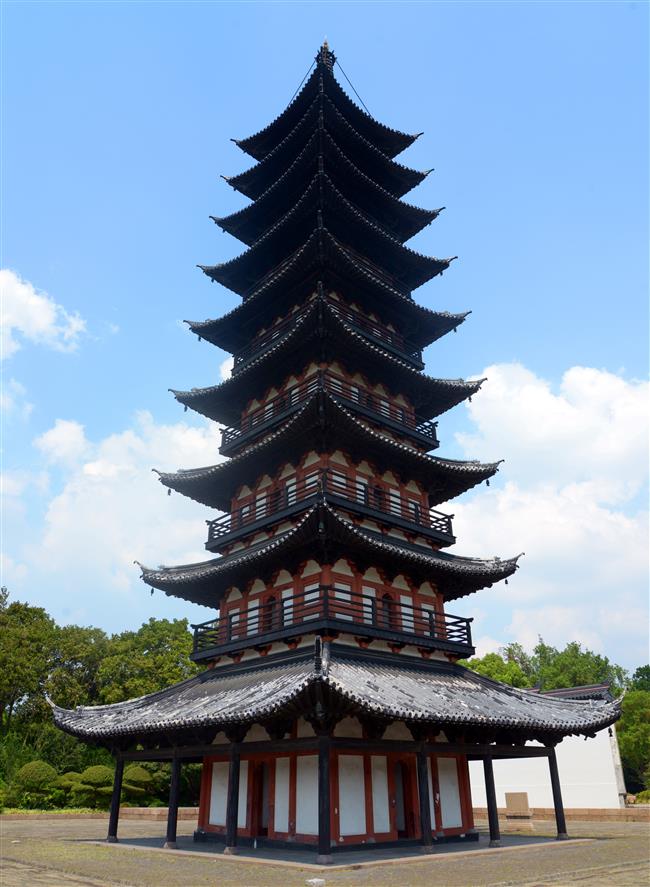 Old and new, East meets West. Fangta Park in the eastern corner of the former Old Songjiang in southwest Shanghai has melded disparate elements into a delightful site that might better be called an open-air museum.

“It’s interesting to note that there was no park here some 30 years ago,” says park official Yu Jie. “It was built to protect the old architectural relics and offer local residents a tranquil place to spend some time.”

Indeed, three decades ago, the area was awash with rubble and overgrown with weeds. The dilapidated tower, ancient stone bridges, old dried-up wells and scraggly vegetation did little to make the place inviting.

Then Feng Zishong (1915-2009), an architect and professor at Tongji University, was invited to design a park that would preserve the cultural relics and integrate with the while surrounding landscape.

Feng set up several whitewash brick walls in the south and east, echoing with the ancient zhaobi in the north. His design separated the park into different spaces — a big lawn, a central square and a lake — with the tower as its centerpiece. The various spaces were linked with meandering paths.

Walking into the park, visitors are often surprised to find openness and a wide vista -— elements not associated with the delicate, complicated designs of traditional Chinese gardens.

The path from the northern gate to the tower is flanked by lush green trees. The short journey onward becomes an inviting prelude to arrival at the tower when it suddenly pops into view.

The elevation of the walkway was specifically designed to be lower than the tower’s terrace, “making visitors admire the tower as if they were looking at a precious item exhibited in a museum,” Feng wrote in his work log.

Though constructed during the Song Dynasty, the tower really exemplifies the architecture of the earlier Tang Dynasty (AD 618-907), with its grand and imposing style. The tower has nine stories, rising to 42.65 meters. Technically speaking, Song Dynasty towers were usually hexagons, but this tower follows the oblong Tang style.

If you look closely, you can see carvings on the ancient doors and pillars. Many of the roof tiles are originals. The brick-and-wood tower is considered one of the best remaining examples of the ancient ornamentation and architecture of southern China.

Bronze bells at the four tips of the tower have been tolling for more than 900 years. The bells are called jingniao, or alarming birds, because they were originally designed to keep birds from nesting on the roof.

That the tower has survived the centuries is a feat in itself. The secret lies in ancient architectural techniques. Contemporary experts found large amounts of wood used in staircases, tower eaves and arches, and were surprised to discover that the wood had resisted rot and insect infestation. During the War of Resistance Against Japanese Aggression (1937-45), a bomb exploded near the tower, but the structure emerged unscathed.

Professors Chen Congzhou and Lu Binjie from Tongji University, who studied the tower for years, noted in a book they wrote that the wooden structures must have been treated with some sort of preservative to allow the tower to survive for 900 years.

The tower is open to visitors, who can climb to the top to get a bird’s-eye view of what was once Old Songjiang, though it is now filled with high-rises and busy streets.

Standing atop the tower, visitors get the feeling that the structure leans slightly to the southeast. That was an intentional feature created by ancient builders. Since Songjiang is located by the sea, the slant was designed as a buffer against typhoons from the southeast.

The Tianfei Palace was built in 1884 to worship Mazu, a goddess of the sea who protected the fishermen and kept the ocean calm.

In front of the tower is the screen wall, designed for optimum feng shui. The stonewall at the site, which is 4.75 meters high and 6.1 meters wide, is ornamented with ancient mythological animals and is regarded as the oldest and most intact large brick relief sculpture in Shanghai.

A legendary creature named Tan, which has a dragon’s head, a lion’s tail, a bull’s body, a deer’s legs and fish scales, and feeds on coins, gold and gemstones, is depicted on the screen wall. The Tan, it is said, leapt high to swallow the sun over the sea, but fell and drowned. The tale was meant to warn people against the vice of greed.

The wall was built in 1370 as a screen for the Songjiang Chenghuang (City God) Temple and managed to survive Japanese bombing in the early 1930s. It also escaped damage during the “cultural revolution” (1966-76), when many ancient structures were demolished.

A few steps to the north of the tower stands the Tianfei Palace, which was built in 1884. The building was originally located on what is today Henan Road in the heart of downtown Shanghai. It was relocated to Songjiang in 1978 to make room for urban development.

The palace was built to worship Mazu, a goddess of the sea who protected the fishermen and kept the ocean calm. The main hall of the palace, covering 330 square meters, is characteristic of the late Qing Dynasty (1644-1911) in its architectural style, carvings and inscriptions, and broad staircases.

Feng deliberately placed the palace off the same axis as the tower and screen wall, in order to give a more lively, flowing impression.

About 100 meters to the south of the tower is the Wangxian Bridge, a stone and wood structure in a perfect arch. It was constructed during the Song Dynasty. Two pylons at either end of the bridge are carved with delicate lotus flowers.

The most famous modern work Feng designed for the park is Helou Hall, a kiosk with a straw roof and bamboo posts. Its simple materials and clean-cut lines integrate beautifully with nearby waterways, hills and ancient structures, reflecting the architect’s pursuit of simplicity and purity.

In 1999, the structure won an award at the World Congress of Architecture, a top honor for the architect. Today, visitors can sit and marvel at his creativity while sipping green tea in the kiosk. 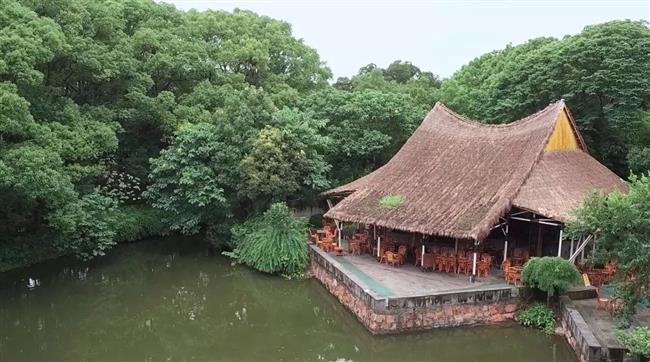 Helou Hall is a kiosk with a straw roof and bamboo posts.

How to get there: Take Metro Line 9 to Zuibaichi Station. Then shift to buses Songjiang No. 2, 11 or 33, and get off at Fangta Road S.