Many people consider a visit to a historic site as being incomplete without an overnight stay. When the crowds have gone, either in early morning or at dusk, historic structures reveal their shapes against the skyline, showing true colors and characteristics. Free of tourists with cameras, you are able to enjoy a peaceful moment in the amazing beauty of the location.

If a hotel itself is a tourist attraction, or an attraction functions like a hotel, its surroundings will automatically become private "territories" for hotel guests. They also then become part of the scenery. Located in Zhenhai District, Ningbo, the Seventeen Houses of the Zhengs is such a place — a large ancient village that retains its old looks but serves as a resort hotel. 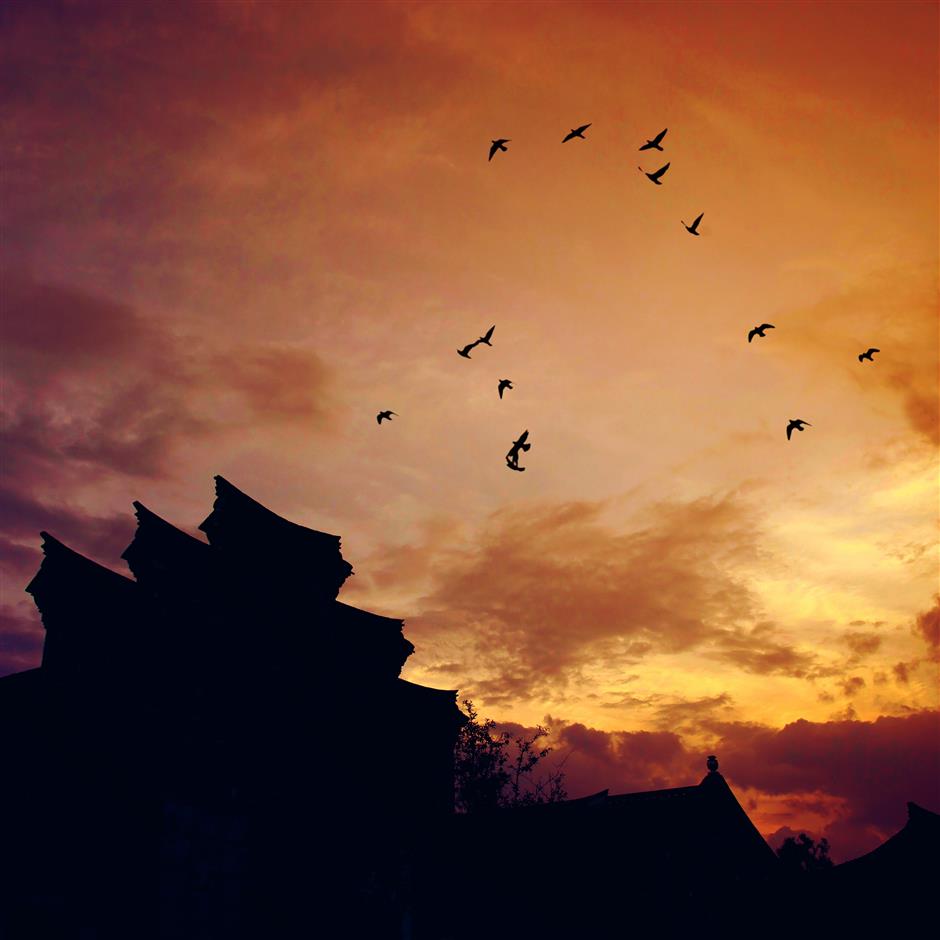 Located in Zhenhai District, Ningbo, the Seventeen Houses of the Zhengs is a large ancient village that retains its old looks but serves as a resort hotel.

Village with a unique layout

Dating back to the Southern Song Dynasty (1127-1279), the Zheng family traveled south following the relocation of the imperial palace, settling in the village to which they gave their name. Covering a total of 40,000 square meters, the houses in the village were mostly built during the Ming (1368-1644) and Qing dynasties (1644-1911). They constitute one of the largest and most complete surviving group structures of that era anywhere in China.

Views of the village highlight the rarely seen layout which features characteristics of both a typical water town village and a traditional Chinese imperial palace. Like most water towns along the southern Yangtze River, each house in the village is surrounded by the river and has a pier. Streets connect each of the 17 houses and the village has a market place with stores.

Two adjacent buildings are arranged in a chessboard format, symmetrical to two axes: an east-west axis and a north-south axis. This is a typical layout of Chinese imperial palaces. For example, the main structure of a big house in the village has a courtyard, a main hall and a backyard on the vertical axis. Functional wings were built symmetrically to the axis.

There are two kinds of wings, namely, bright wings (明轩) and dark wings (暗轩). Such a design forms a three-sided courtyard house in a shape resembling either the Chinese character “冂” or the upper-case English letter “H.” Sometimes, a secondary building would be attached to the main house in the front, known as “倒轩” (a corridor-shaped room), forming a square/rectangle courtyard house. These designs were used to depict the relationship between the seniors and juniors, genders, masters and servants. According to locals, these layouts were adopted because many government officials and businessmen ultimately originated from the family of Zhengs.

Thanks to the weather-proof design of corridors and alleys, they connect all structures in the villages and shield today’s visitors from the effects of nature. But the weather still has an impact, with the colors of white walls, grey tiles, chestnut banisters, and brown beams becoming more vivid after being washed by the rain.

Matouqiang, or Horse Head Walls, are a local characteristic and can be seen everywhere. These walls are higher than the roofs and form a flight of stairs. The top of the wall is covered by tiles and the two ends feature exquisite carved animals, such as dogs, fish, and chickens. From a distance, the wall looks like a horse neighing to the sky and is the origin of its name. The high wall blocks much sunlight, creating a depressing atmosphere.

Visitors are advised to take a close look at the inside of buildings. They will find entire areas highlighted by delicate carvings, from room corners and roof ridges to corridors, door frames and windows. It’s a shame that many valuable carvings are teetering on the edge of extinction due to lack of regular maintenance and repairs in some old buildings.

To its credit, the hotel management strives to restore the ancient carvings and celebrates the results. An entire block of carvings are removed and placed in the courtyard for visitors to appreciate during the repair and restoration process. There are carving works in clay, wood, brick, and stone. The patterns range from flowers, grass, cactus, fish, and strange fruits to all kinds of grains, filled with good will and blessings. The most valuable work is the wood carving featuring the Chinese characters “淇水烟波半含春色” written by Yongxing, the 11th son of Emperor Qianlong in the Qing Dynasty. A stone plaque from the Qing Dynasty inscribed with the Chinese characters “圣旨” (the Emperor’s decree) is still well preserved.

It’s interesting that all waterways in the village are free of pollutants, unlike other rivers in Zhejiang and Jiangsu provinces in recent years. According to locals, there is an unwritten rule in the village: those who throw rubbish into the river will be levied the punishment of making and distributing mantou, a kind of steaming Chinese bread, to each household. 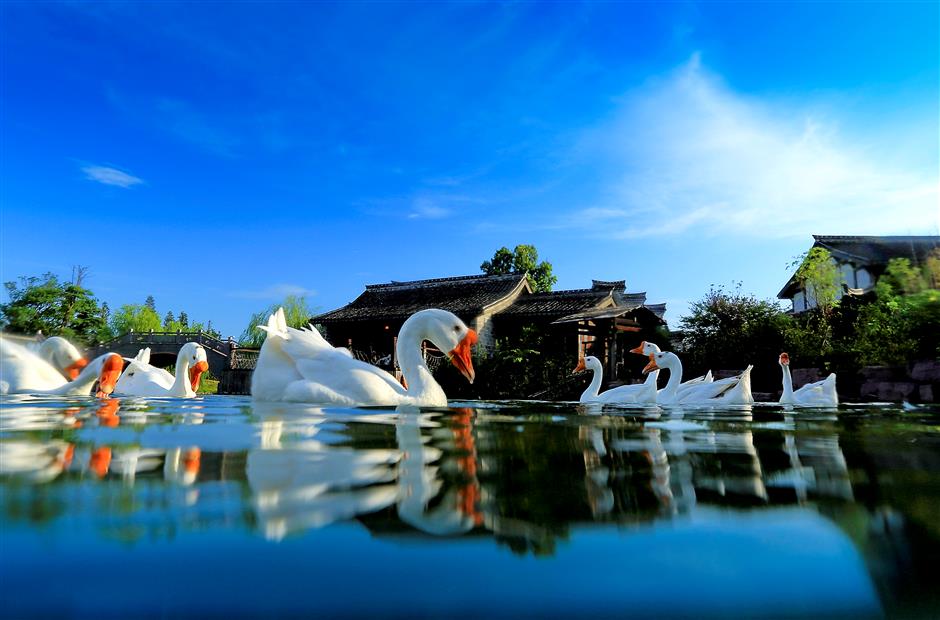 Like most watertowns along the southern Yangtze River, each house in the village is surrounded by the river and has a pier.

Living in the ancient house

All descendants of the Zhengs have long since moved out of the village. The town had been protected by local government as a national 4A scenic area before the hotel moved in. The hotel is managed by New Century Hotels & Resorts Group, the first Chinese company to run a resort hotel to protect an ancient village.

The Zheng houses have been renovated to accommodate 116 guest rooms. Two-story houses have become loft suites. The outer wall remains the same though the interiors now feature modern but local traditional décor with functional facilities such as heating and sanitation. The door of each room faces the courtyard and interiors are decorated with traditional Chinese couches and an old-fashioned square table to seat eight guests.

The original beams, doors and windows were retained during the renovation makeover to preserve the precious old structures. Hence, there is a lack of natural light in guestrooms. The wooden beams also contribute to the darker atmosphere. If you stay in these rooms overnight, it might get a little spooky. And it takes a while to get to the hotel reception area which can be reached by either a long walk or by scooter.

Some people argue it is destructive to cultural heritage sites if they are adapted for hotel use. However, with more and more good examples, it can be a wise option.

The maintenance and protection of such cultural relics requires a large amount of money. If they are not managed to make money under a suitable business model their preservation becomes a burden on government funding. Compared to government and other businesses, heritage hotel operators are more willing to invest in the restoration of old buildings.

For example, Scotland Yard, the former headquarters of the Metropolitan Police Service of London, will soon be reopened as a five-star hotel. Built in 1829, the building will be restored to its original looks. It is estimated that the cost to restore each square meter may reach 10 million yuan (US$1.5 million).

Special Reports
ADVERTISEMENT
61793
,
For a spring break, take a stroll in our beautiful backyard
Been there, done that? Not at these quirky sites
B&Bs in rural areas add artistic flourish to farmland holidays
Xiangshan awakens with arrival of spring
Hangzhou abounds with festival activities
A step back in time in any language in Songjiang
Fudan University founder's home is renewed
Mount Chaoshan celebrates plum blossoms with cultural activities
All aboard for a culinary excursion that will tantalize the taste buds
An excursion that gives us something to think about
EXPLORE SHINE