2 Chinese unique towns to be preserved

The Ministry of Housing and Urban-Rural Development has named two Hangzhou towns on its list of unique towns. Local governments are required to preserve the original culture and protect the local ways of life of these towns.

Fuchunjiang Town of Tonglu County and Shouchang Town of Jiande County will be offered financial support to help the local governments to preserve their distinctive architecture and folklore.

The antique buildings and traditional crafts in these two towns are recognized as evidence to Hangzhou’s rich history. Approximately two hours’ drive from downtown Hangzhou, the villages are well worth a weekend trip. 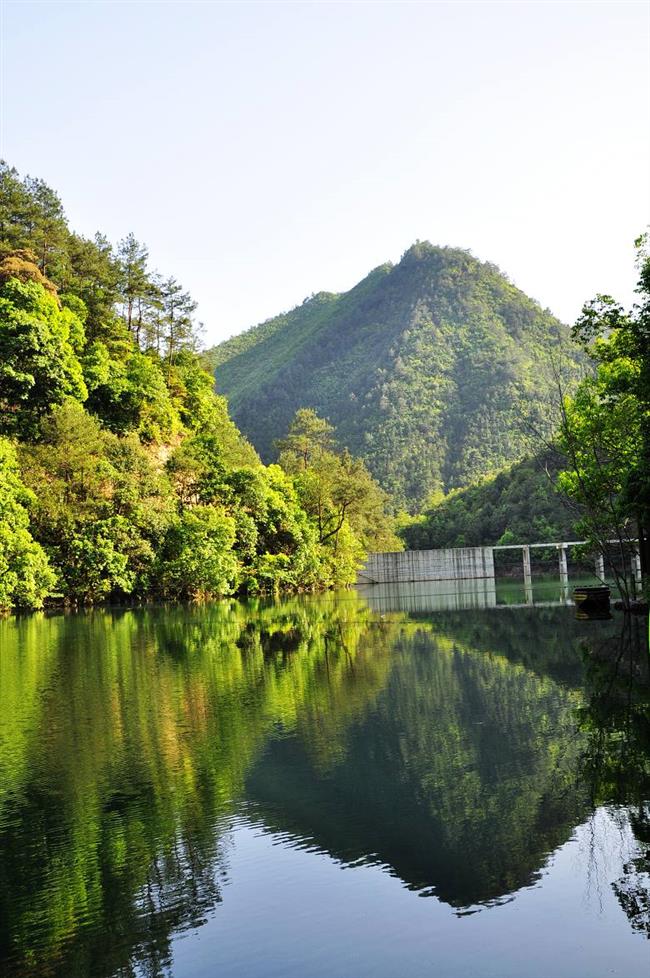 The town is famous for its hot spring, which is the only natural sulphur spring in Zhejiang Province. It contains 3.07 milligrams of hydrogen sulfide per kilogram of water — more than double the national standard of sulphur content in curative mineral water.

In 1987, a geological team that was looking for gas discovered this hot spring hundreds of meters below the surface. That led to the creation of the town’s hot spring business.

Compared with artificial hot spring, sulphur can soothe rashes caused by eczema and diaper rash. A good long soak can rejuvenate the mind and strengthen the body since sulphur helps protect against toxins in the environment.

Operators add herbs and rice wine to the hot spring ponds, which are believed to have therapeutic effects.

Another attraction of the town is the Green Lotus Pond Forest, which is considered one of the oldest nanmu forests in Asia. Nanmu is a type of tree with a long history that has been used in China for building boats, architectural woodwork and wooden craft.

Nanmu is highly prized since it can take a millennium for these trees to mature and produce useful timber. Its superior durability makes it resistant to decay. Therefore, nanmu was often used to build houses for the upper class, as evidenced from their appearance in antique wooden buildings.

Today, lush vegetation covers an area of some 30 hectares with some 300 other plant varieties and 30 animal species. The expansive natural vistas thrill visitors and nature enthusiasts, turning the area into a favorite among local hikers and outdoor adventurers. 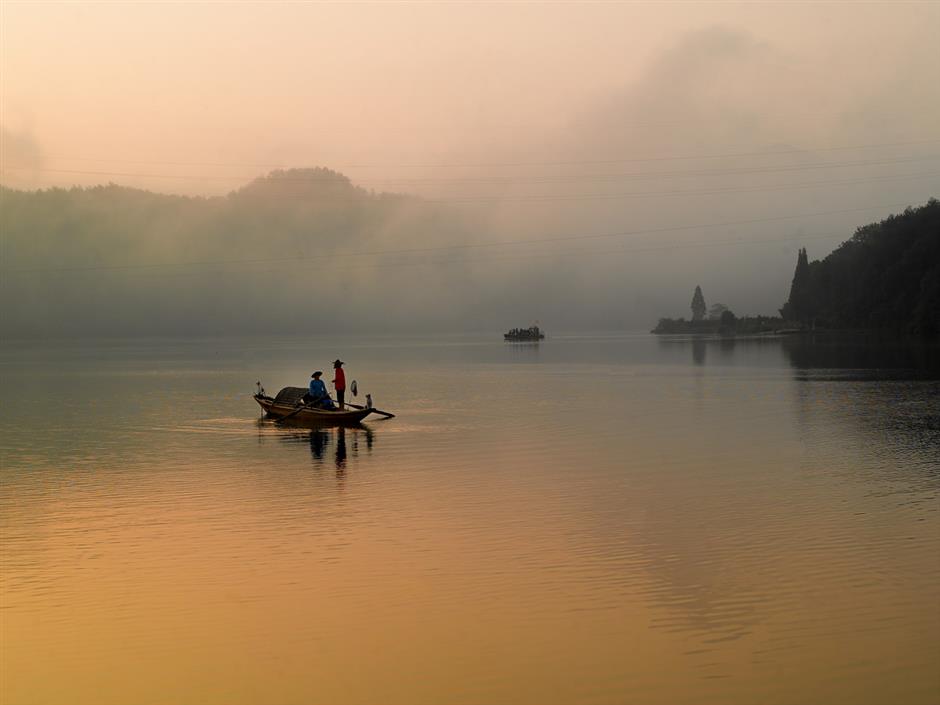 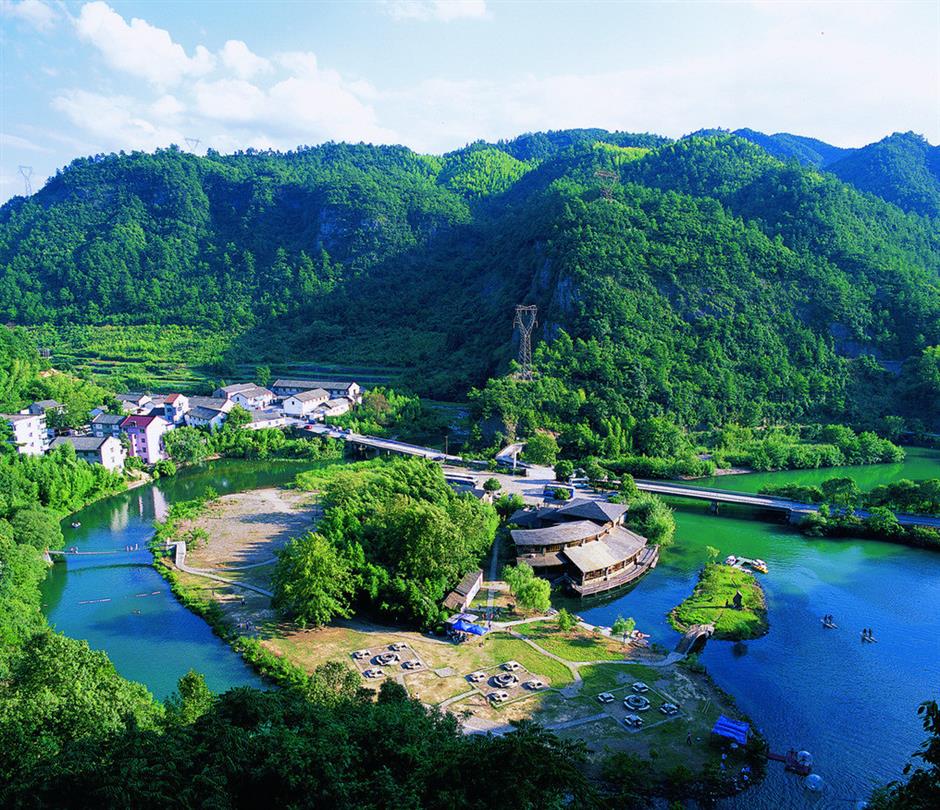 This town is nestled along Fuchun River and named after the watercourse, as the character “jiang” literally means river in Chinese. The river is known for its long link with literature and arts with many scholars having lived there or written poems about it.

Today, the town still remains the fishing platform of the famous literati Yan Ziling. During the Eastern Han Dynasty (AD 25-220) when Yan was too proud to accept an official post from the emperor, he sought refuge in the mountains and survived by fishing.

The Fuchun River flows through green and luxuriant hills, offering many quiet and beautiful attractions. Inspired by the scenery, famous painter Huang Gongwang created the painting “Dwelling in the Fuchun Mountains,” which today is one of the master’s few surviving works.

Another popular attraction of the town is the Luci Village. It boasts idyllic landscape filled with lush bamboos and pine trees. Visitors can hike through the forest. The Luci Bay is available for swimming and paddling. It is about 1.5 meters deep and features bluish-green clear water.

In addition to natural view, the village also features long history and enriched culture. Famous poet Fang Gan lived in the village during the Tang Dynasty (AD 618-907). Today, the village is a treasure trove of ancient architecture, streets, temples and ancestral halls.

Its location near Fuchun River makes the freshwater fish and shrimp worth trying. Local farmers provide accommodation, food and entertainment to guests. And with the growing number of people living in cities longing for some fresh air and an escape from the stresses of daily urban life, farmhouses in the village have become even more popular with tourists.

Moreover, roads and other infrastructure there have been upgraded in recent years, attracting more and more visitors from Hangzhou and cities in the lower reaches of the Yangtze River.

How to get there: Changchun-Shenzhen Expressway. Get off on Fuchunjiang Exit