The fascinating history of Guilin Park 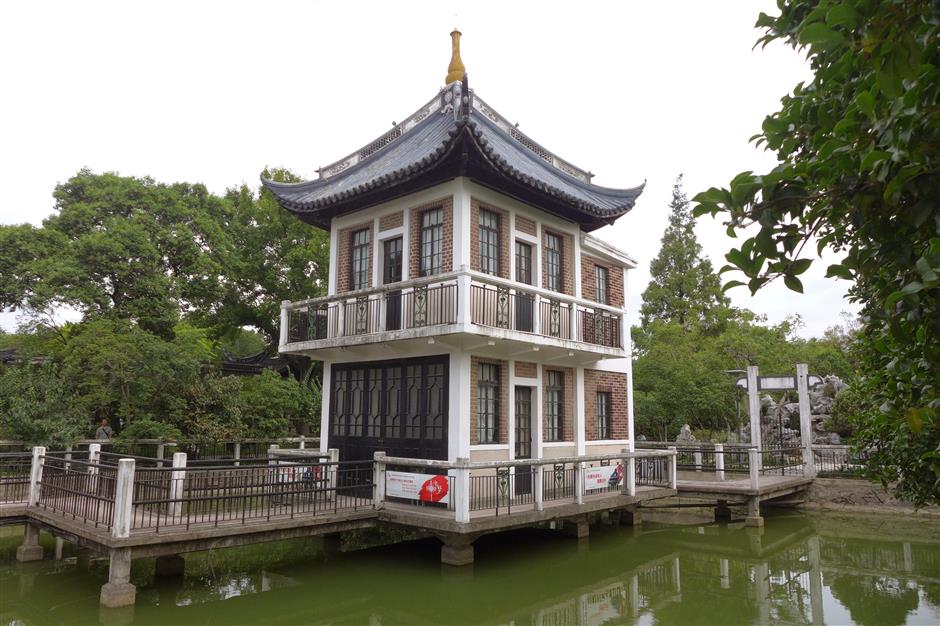 The Yiting Pavlion, which stands in the middle of a pond, is a combination of a Western-style body and a Chinese cornice. 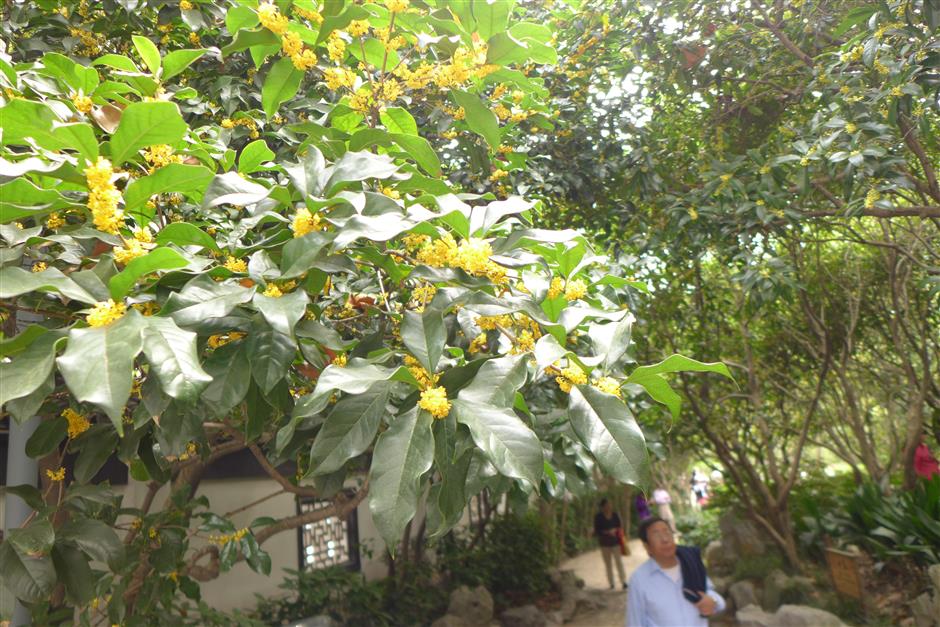 Osmanthus flowers are what Guilin Park is most famous for.

Come the Mid-Autumn Festival, and the sweet scent of the osmanthus in Guilin Park will make it one of Shanghai's most fragrant places.

There are more than 1,000 osmanthus trees in the park. In fact, that is how the park got its name. It has nothing to do with the capital city of the Guangxi Zhuang Autonomous Region — here Guilin literally means “forest of osmanthus.”

During the Mid-Autumn Festival which falls on October 4 this year, it is usually a tradition for locals to head to the park. In the midst of nature, they guess riddles on the lanterns, play games and enjoy tea and snacks made from osmanthus flowers.

Huang was a sheriff but his real claim to fame was as the head of “Green Gang,” the largest mafia group in old Shanghai. The other two lead members were Du Yuesheng and Zhang Xiaolin. 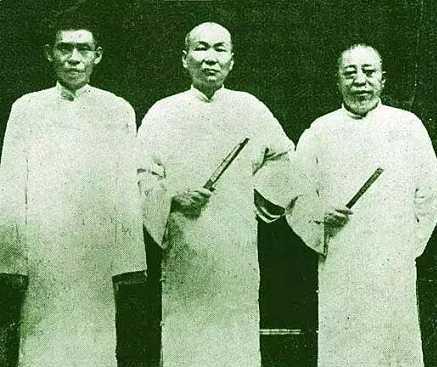 At one time, there were more than 1,000 gangsters in his group, and he controlled the entertainment industry back then. He operated several popular venues such as the Great World and the Gong Stage.

Originally called Huang’s Garden, the park was built as Huang’s personal residence. Work on the park started in 1929 and was completed four years later.

The park reveals the personal taste of Huang, who never went to school but was fairly good in painting. The layout of the park has all the classical elements of a traditional Chinese garden but a Western-style feature at its tip. As Westerners flocked into China, Western elements were very much in vogue then.

A good example is the Yiting Pavilion, which translates into the Fitness Pavilion. Located in the middle of a small pond, the main body of the building is very Western but on the top is a Chinese-style cornice. At first glance, people think it's weird, but seen carefully it has a strange harmony.

Soon after the park was built, the Japanese army invaded Shanghai and many of the buildings, such as a temple worshiping ancient general Guan Yu (AD 160-220) and the Pavilion of Tranquility, were destroyed.

Although Huang was involved in opium dealing, blackmailing and other dirty businesses, he refused to cooperate with the Japanese.

He and his gang were notorious for the Shanghai Massacre of April 12 in 1927, when they, with support from Chiang Kai-shek, slaughtered more than 300 Communist Party members in Shanghai. 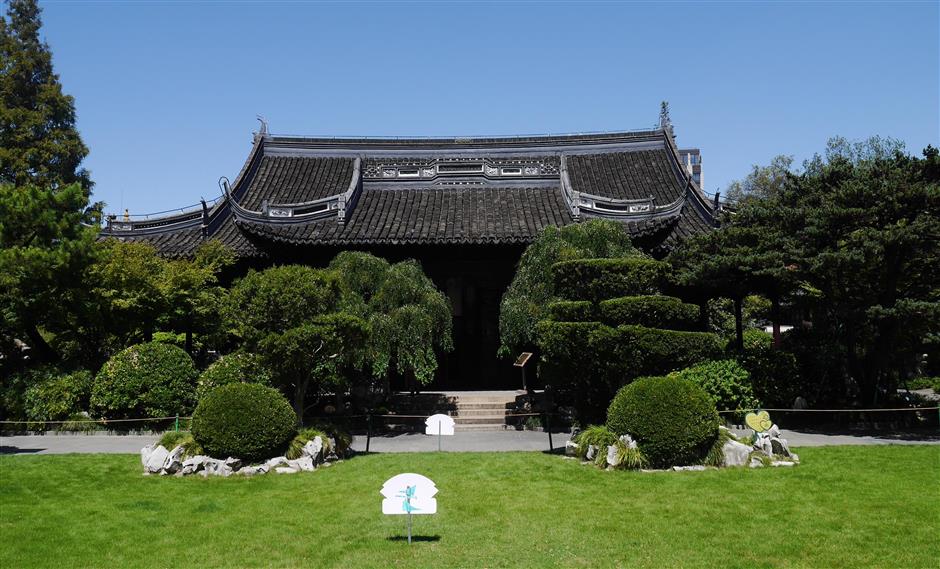 Sijiao Hall, or the Hall of Four Precepts, has been converted into a small museum promoting Pu'er tea.

Huang developed close personal friendship with Chiang, which was revealed in the Sijiao Hall, or the Hall of Four Precepts, in the park. It is said that in 1947, when Huang celebrated his 80th birthday in the hall, Chiang paid him a visit and gave him a formal kowtow.

An inscription done by Chiang was hung in the middle of the hall. It read “Culture, Behavior, Loyalty and Honest” (Wen Xing Zhong Xin). The four Confucian precepts gave the hall its name.

After Kuomintang withdrew to Taiwan, Huang, who decided to stay back in Shanghai, smashed the inscription to “break with the old society.”

Later, a stone stele with the same inscription was displayed in the corridor, but the real one was lost forever. As for the Hall of Four Precepts, it was converted into a small museum and promotes Pu’er tea today.

Huang kept a low profile in his later years, disbanded his gang and moved to a small lane. He lived in fear that he would be arrested and jailed for his part in the massacre, but the new city government factored in his advanced age. He was asked to express regret in a newspaper article, which he did. He swept the road in front of the Great World as a sign of remorse. 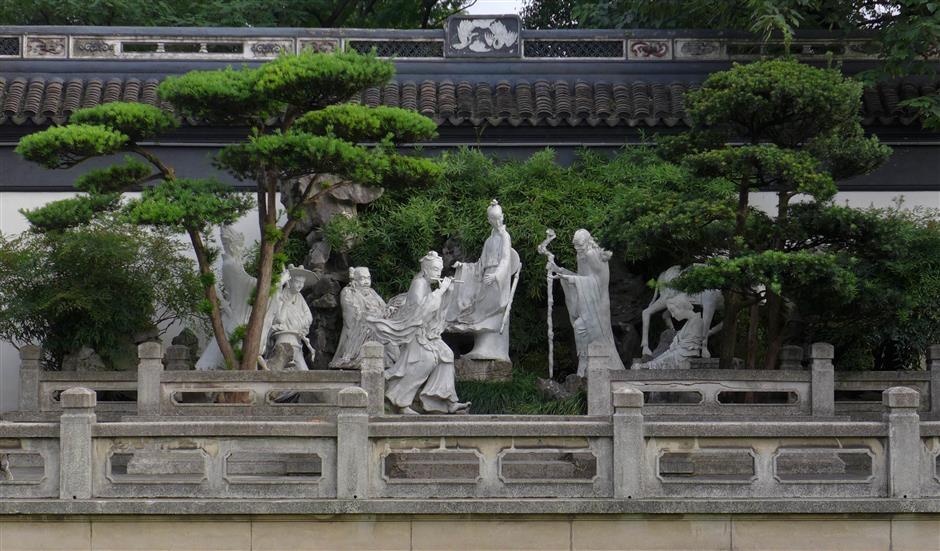 Huang died in 1953 at the age of 85. Four years later, Huang’s Garden became a public park and was renamed Guilin Park.

During the “cultural revolution” (1966-76), the park was again damaged. “Eight Immortals Crossing the Sea,” a group of marble sculptures facing the Hall of Four Precepts, was destroyed. Later, a new sculpture “Fu, Lu, Shou: Three Lucky Stars” was placed at the very same spot.

Today, it is a leisure spot for local residents living nearby. Mothers take their babies to enjoy sunshine; musicians play instruments under the flower frame; while elderly people spend their time enjoying tea.

The park has a new look today as the ghost of the past has been wiped clean. The osmanthus trees are the only witness to the winds of change. 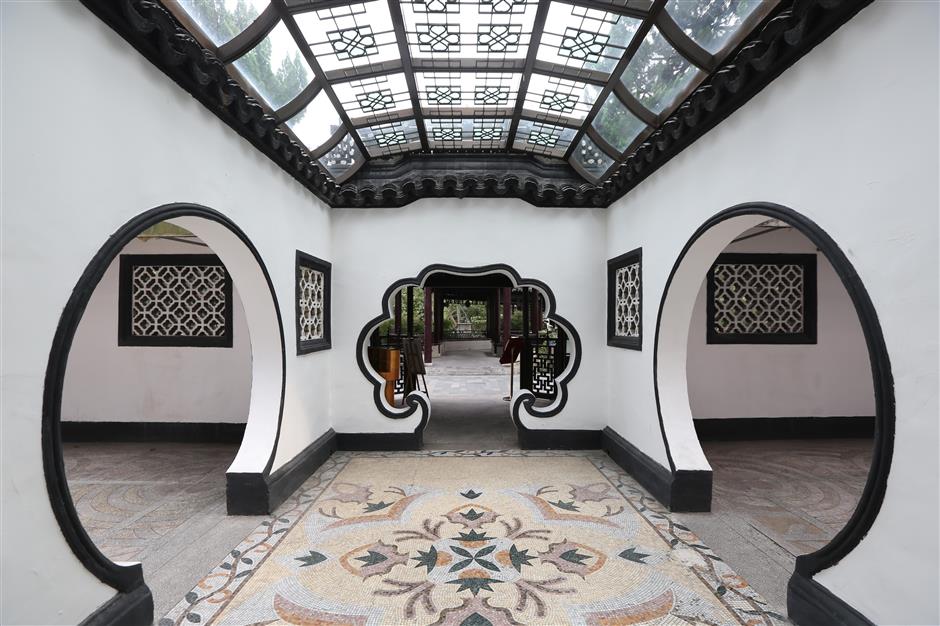 Yuanyang Hall is decorated in a very traditional Chinese style.

How to get there: Take Metro Line 12 and get off at Guilin Park Station.