A watertown of old bridges, pure and simple 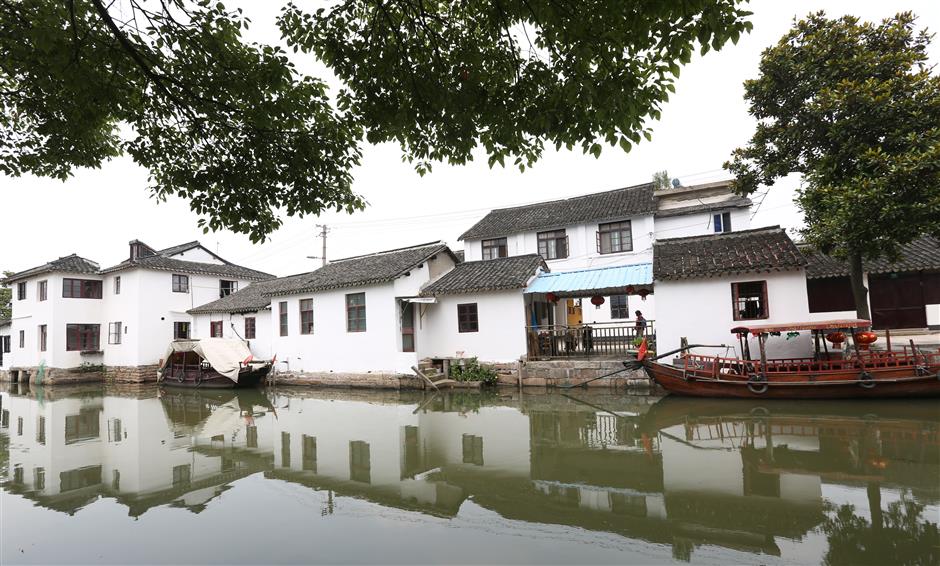 The ancient town of Jinze is only 30 minutes away from the city center.

A drooped vine, an ancient tree, crows return at dusk.

A small bridge, a running creek, huts stand aside.

These two verses by Ma Zhiyuan (1250-1321) are among the best-known and most widely quoted lines to describe a traditional Chinese watertown.

The imagery of a small bridge over a running creek harks to the scenery of every watertown in the Shanghai area. Painters like Chen Yifei (1946-2005) have repeatedly drawn this iconic image. In Zhujiajiao, one of the most popular watertowns in Qingpu District, 36 bridges cross its waterways.

One of the best-kept secrets among watertowns is only 30 minutes away from city center by car. Jinze Town, also in Qingpu District, encapsulates the original setting of an ancient canal town, almost untouched by tourism or real estate developers.

Known as the “town of bridges,” Jinze is also called the “west gate of Shanghai” because it sits on the southwestern-most section of the city bordering Zhejiang Province.

It is a small, peaceful town, with a history dating back more than 1,300 years. Its seven ancient bridges are distinctive in shape and quite well-preserved. 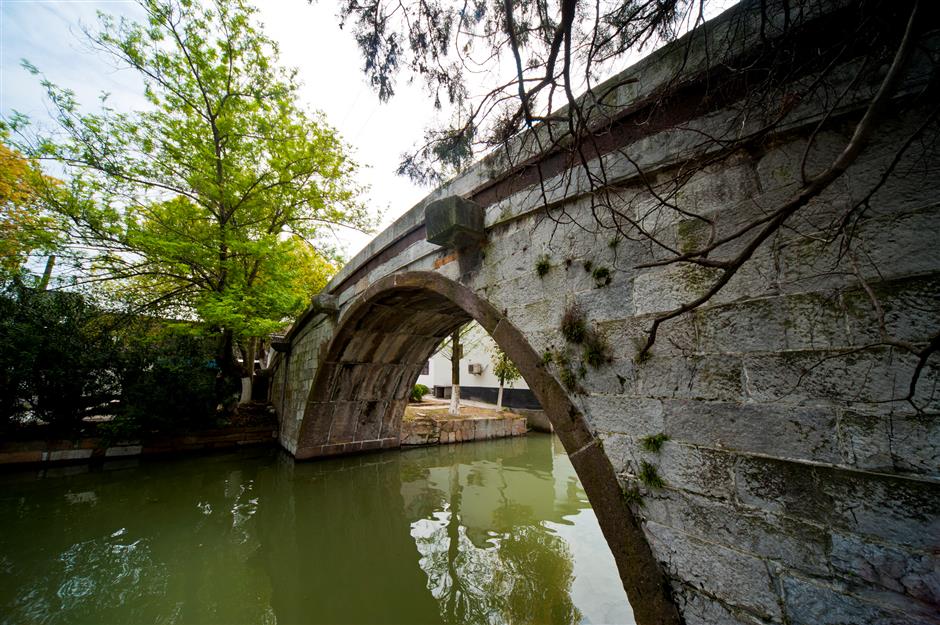 Jinze boasts some of the oldest stone bridges in Shanghai.

What saves this jewel is its status as a protected watershed, which rules out most commercial development. The town supplies water to about 6.7 million residents in Shanghai’s outlying districts, and its water is considered the cleanest in the city.

The protection rules mean that Jinze has escaped the kind of commercial makeover that leaves many watertowns looking identical and sometimes crass.

Jinze literally means “golden water,” referring to its prime location along Dianshan Lake and an interwoven water system of rivers and creeks. Not only does it boast the oldest stone bridge in Shanghai, but also a royal temple that was once the biggest and most famous in the area.

The temple contains the remains of carved clouds based on paintings of Zhao Mengfu (1252-1322), an ancient painter and calligrapher.

Aside from a rich history, the town has a runway along Dianshan Lake that is popular with joggers, and Jinze has become a favorite site for companies to host team-building sessions based on outdoor activities.

Walking along the waterways of Jinze, one gets the sense of time slowing. Here one can see local villagers living in repaired old houses built more than 100 years ago. Their lives don’t seem much changed from 30 years ago. Modern structures are as rare as passing cars.

Seven ancient bridges cross the main river, each displaying the distinct characteristics of the dynasties during which they were built.

It is an old Chinese tradition for a successful person to build roads or bridges in his hometown as a tribute to heritage. In ancient China, prosperous merchants or high-ranking government officials often retired to their birthplaces. There, they were expected to take up social responsibilities, such as founding schools, hospitals and temples, and helping the needy.

To certain extent, the number and size of bridges in a town reflects its past glory. During its peak, Jinze is said to have had dozens of bridges and one temple astride each bridge. Many were destroyed during warfare and turbulence over the centuries. The ones left standing are a tribute to a golden past. 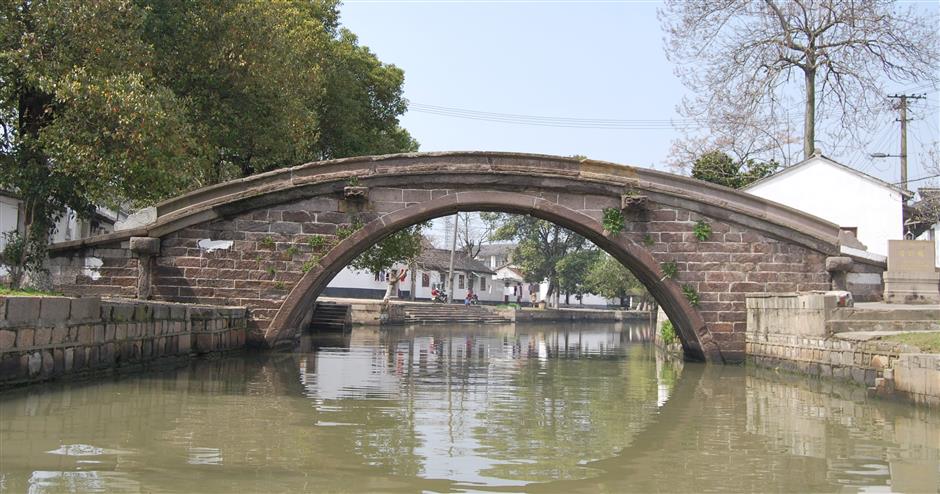 According to legend, a general of the Eastern Wu Kingdom (AD 220-280) led an army here for defense. Because the area was crisscrossed by waterways, he ordered his soldiers to build bridges and set up temples on one end of each bridge to pray for safety and peace.

Puji Bridge, the oldest one remaining in Jinze, was actually built in the Southern Song Dynasty (1127-1279), an era when the imperial army was defeated by the northern marauders and the emperor and most of his family were seized.

A young prince named Zhao Gou (1107-1187) managed to escape from his captors and fled from Beijing to Hangzhou, where he hoped to rebuild the dynasty. However, that never happened in his lifetime.

On his escape, Zhao passed through Jinze. He was smitten by its charm and decided to stay for a few nights. His prime minister, Lu Yihao, was so taken with the town that he vowed to retire there someday.

Lu subsequently built a huge mansion in anticipation of his retirement and ended up donating it to the monks who founded the Yihao Temple, named in his honor. At its peak, the temple had more than 1,000 rooms and thousands of practicing monks.

Destroyed in war, only a small section of the temple was restored in 1992. It now houses two ancient treasures of the temple – a 700-year-old gingko tree and the relics of stone-carved clouds based on Zhao Mengfu’s paintings.

Zhao, a descendent of the royal family, was devastated when the dynasty declared by Zhao Gou was eventually defeated by Mongol warriors. He found solace in art and philosophy and frequently visited Jinze, his wife’s hometown.

Puji Bridge is an arched, single-hole stone bridge spanning 27 meters. The bridge is made of purple ore.

About 200 meters away is Yingxiang Bridge, famous as a spot to watch the reflection of the moon in the water. Another span, Ruyi Bridge, was built in the Qing Dynasty (1644-1911) and is the best preserved of the bridges.

To this day, elderly villagers in Jinze burn incense at the foot of bridges where temples once stood. 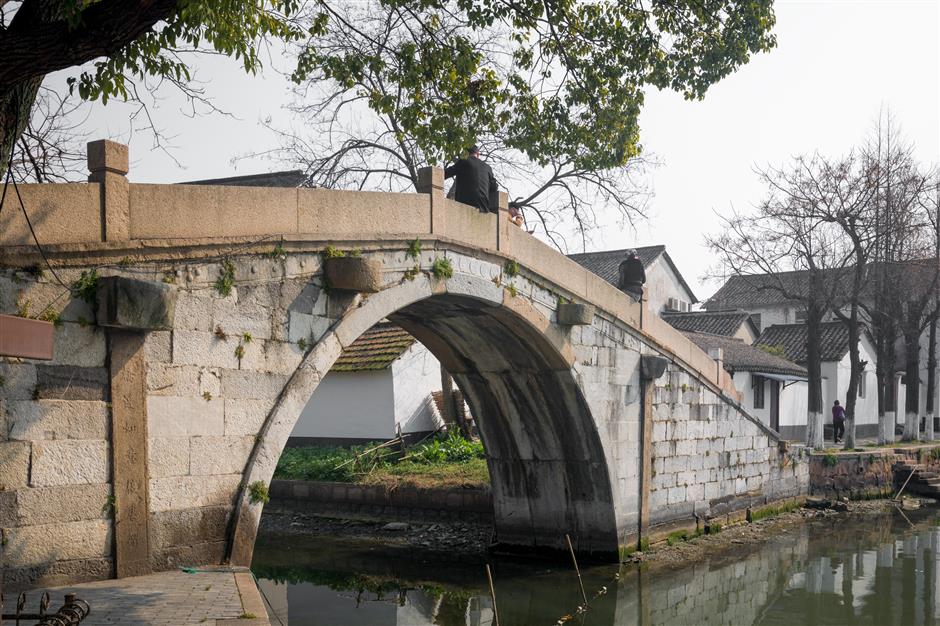 A lot more to enjoy in Jinze

Jinze is famous for its scenic setting, thanks to the lakes, rivers and creeks that occupy more than a third of its area. Nineteen of 21 natural lakes in the vicinity abut the town, including Dianshan Lake, the largest and a famed resort spot.

Caibang Village, one of nine villages that comprise the town, sits lakeside, surrounded by water on three sides. The villagers there have started some homestay accommodation and meals for visitors in their houses in the last two years.

These amenities are not widely known, providing those in the know with attractive, uncrowded and relaxing getaways that lead to repeated visits.

Another highlight of the village is called “grandma’s tea,” a Chinese version of high tea. Local elderly women have long carried on a tradition of gathering amid snacks and tea in the afternoon to chat in a verdant setting.

The Qingxi Countryside Park is also close by, built on a natural wetland alongside Dalian Lake, or Big Lotus Lake. Opened last September, it has already become a popular destination, especially for photographers.

No. 9 in Caibang Village of Jinze Town

Dining tip: Be sure to try the zharou, or soy sauced pork, hairy crabs, freshwater shrimp and locally grown vegetables.

The Qingxi Countryside Park is built on a natural wetland. 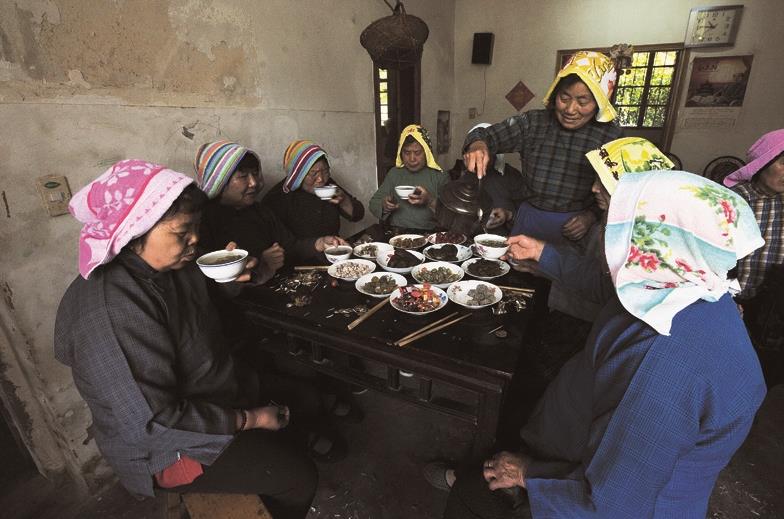 "Grandma's tea" is a Chinese version of high tea.

By car: Take the G50 Highway from downtown and turn onto the Huqingping Highway. Exit at Jinzhong Road.

By public transportation: Take the Hushang Line shuttle and get off at Jinze station. Metro Line 17 will be completed at the end of the year. When it’s ready, take the subway and get off at Oriental Green Boat, and then take a taxi trip for 20 minutes.