Mention the Imperial Palace and most people, Chinese and foreign alike, immediately think of the Forbidden City in Beijing. Mention smokestack cities, and many think of Shenyang, capital of the northeastern province of Liaoning.

What a surprise then, to discover that both perceptions are deceptive.

I visited a friend in Shenyang, and one of the places he took me to was the Imperial Palace of the Qing Dynasty, a mini version of its Beijing counterpart. I was surprised to learn that China’s longest-running dynasty got started here.

The Shenyang Palace Museum covers an area the size of about 11 standard football fields. It was the home of dynasty founder Nurhaci (1559-1626) and his son Huangtaiji (1592-1643) before the Qing army conquered the Central Plains. It was also here that Emperor Shunzhi (1638-61) was born and took the throne at the age of 6. He later relocated the capital to Beijing after the Ming Dynasty was overthrown in 1644.

“The two palaces are China’s only existing imperial palace compounds,” my friend told me. 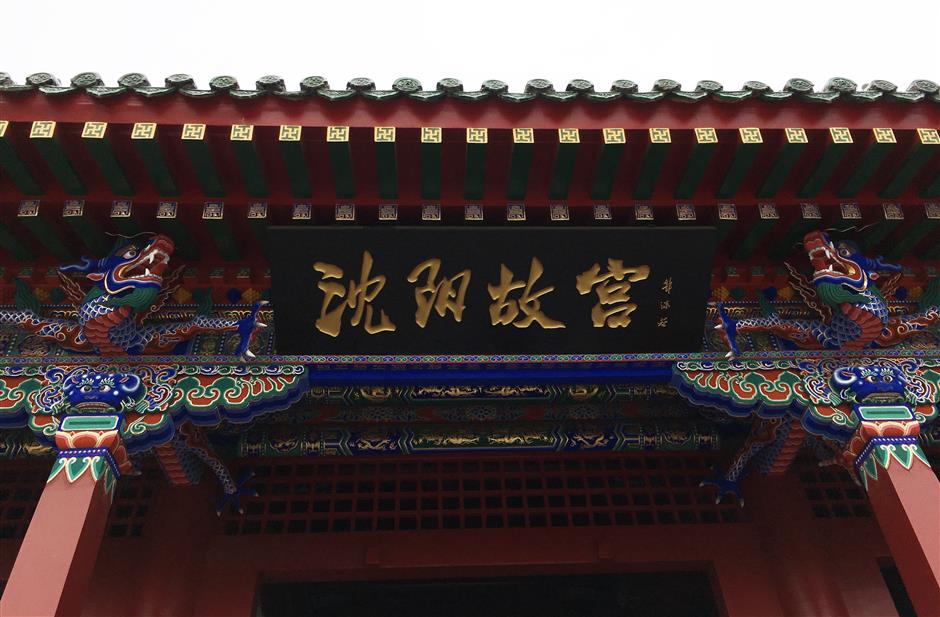 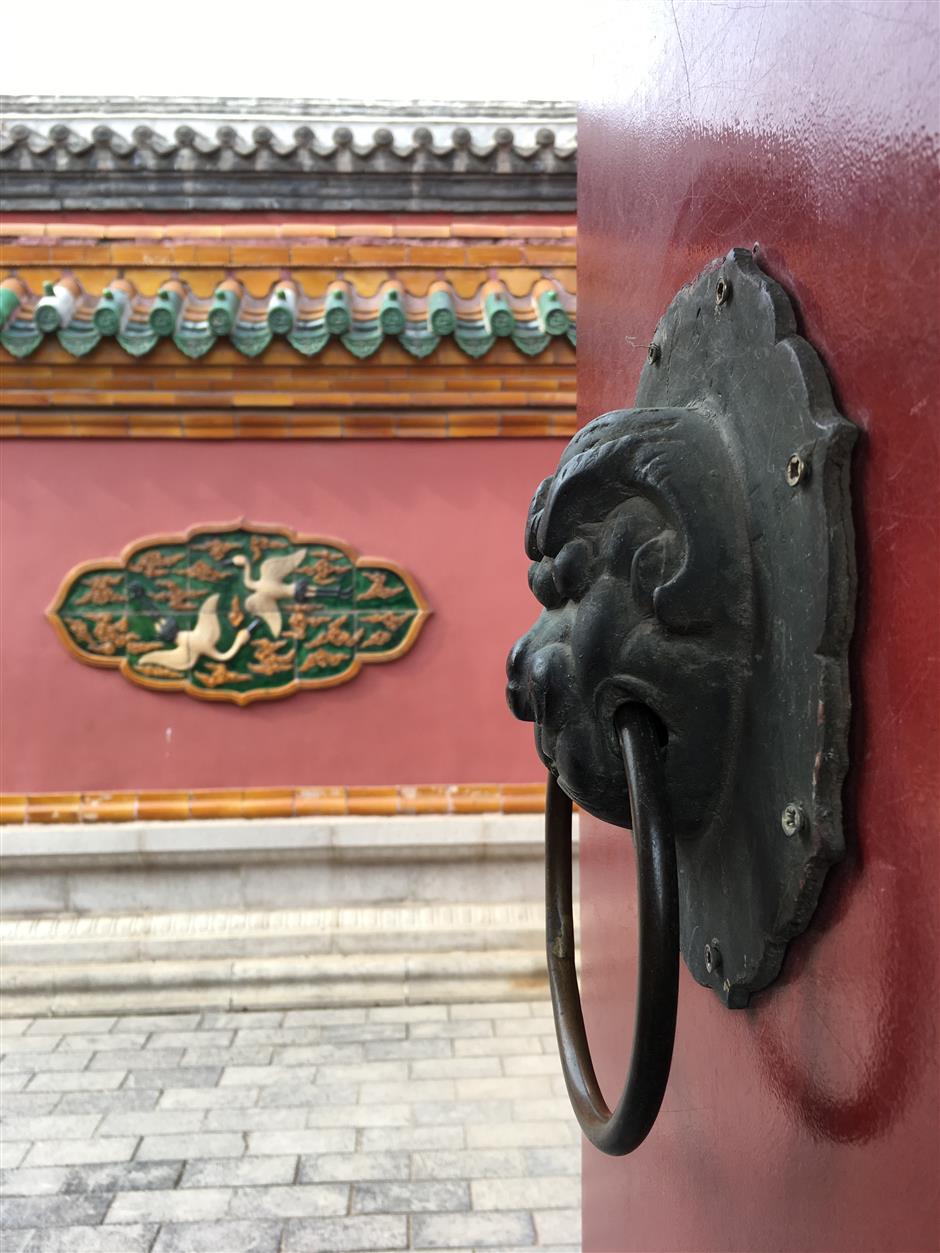 Early construction of the Shenyang Palace Museum began in 1625, after Nurhaci moved the capital from Hetu Ala, today’s Xinbin County in Liaoning, to Shenyang. More structures were added during the reign of Huangtaiji, who officially changed the name of the dynasty to Qing in 1636 when the palace was completed.

The whole complex of 114 historical buildings and more than 500 rooms was listed as a UNESCO World Heritage Site in 2004.

Although historians believe that Nurhaci’s decision to relocate the capital was based on strategic considerations, a folk tale tells a different story.

It holds that Nurhaci was a pious follower of feng shui. Based on a master’s instruction, he ordered a Goddess Temple be built in the southwestern corner of what is today the city of Liaoyang, south of Shenyang. He also had a Mituo Temple constructed within the East Gate and a Thousand Buddhas Temple established at the foot of Fengling Mountain, in the hope of keeping the Holy Dragon at bay.

However, the three temples managed to hold only the head, claws and tail of the dragon, but not the body, according to the tale. So the dragon hunched up and flew toward the north bank of the Hunhe River. Nurhaci thought it was a heavenly sign telling him to build another city at the place where the dragon went under water.

That new city was called Fengtian, literally “revering heaven.” And because Hunhe was called Shenshui and the northern bank of a river was considered yang, or “sunny and positive” in feng shui, the city came to be called Shenyang. 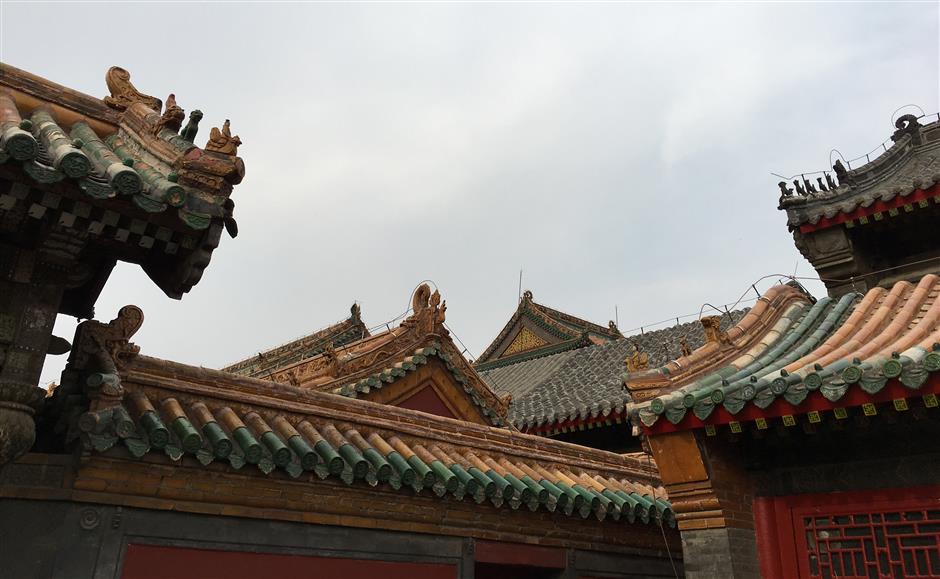 Glazed golden tiles at the Shenyang Palace Museum are often edged with green. 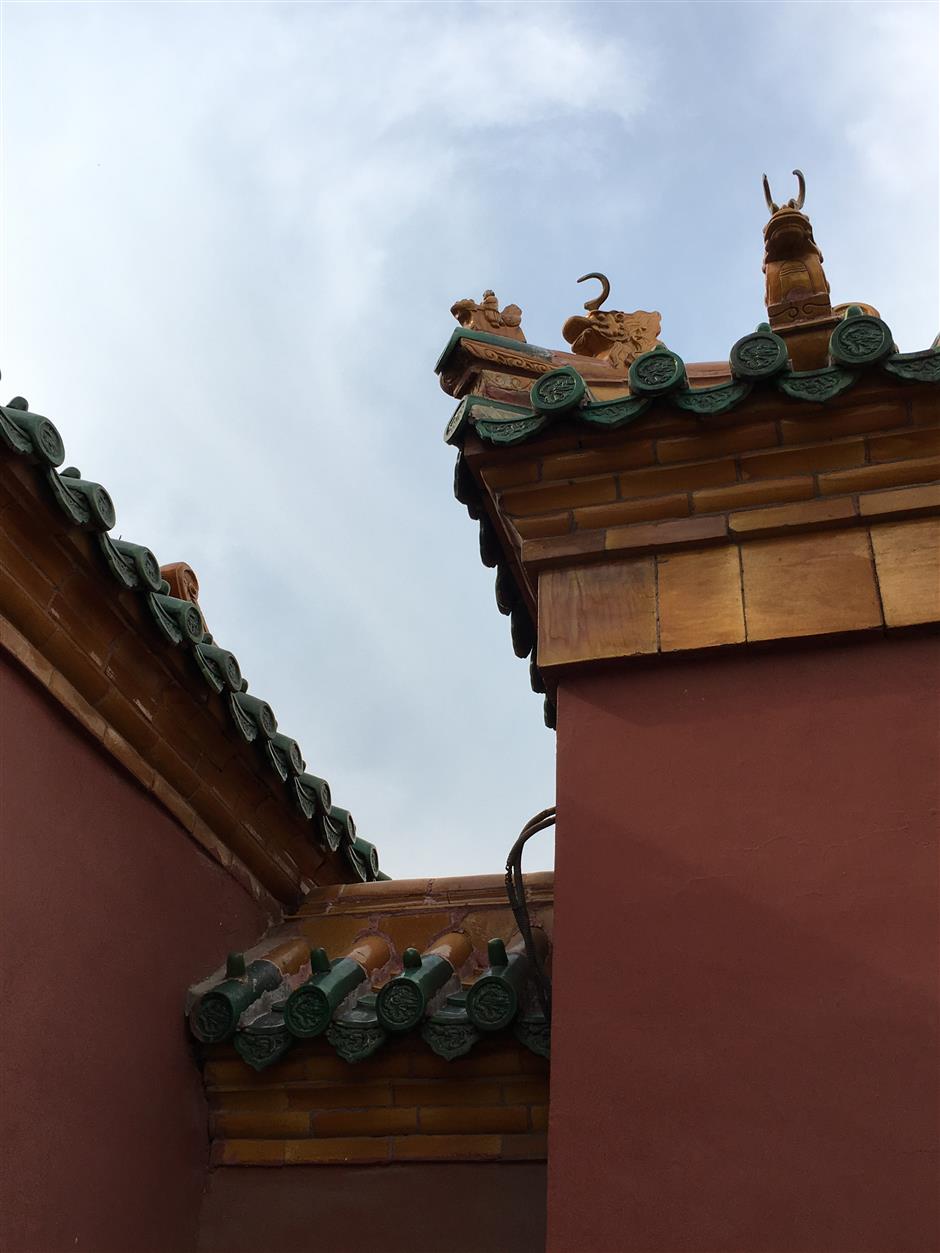 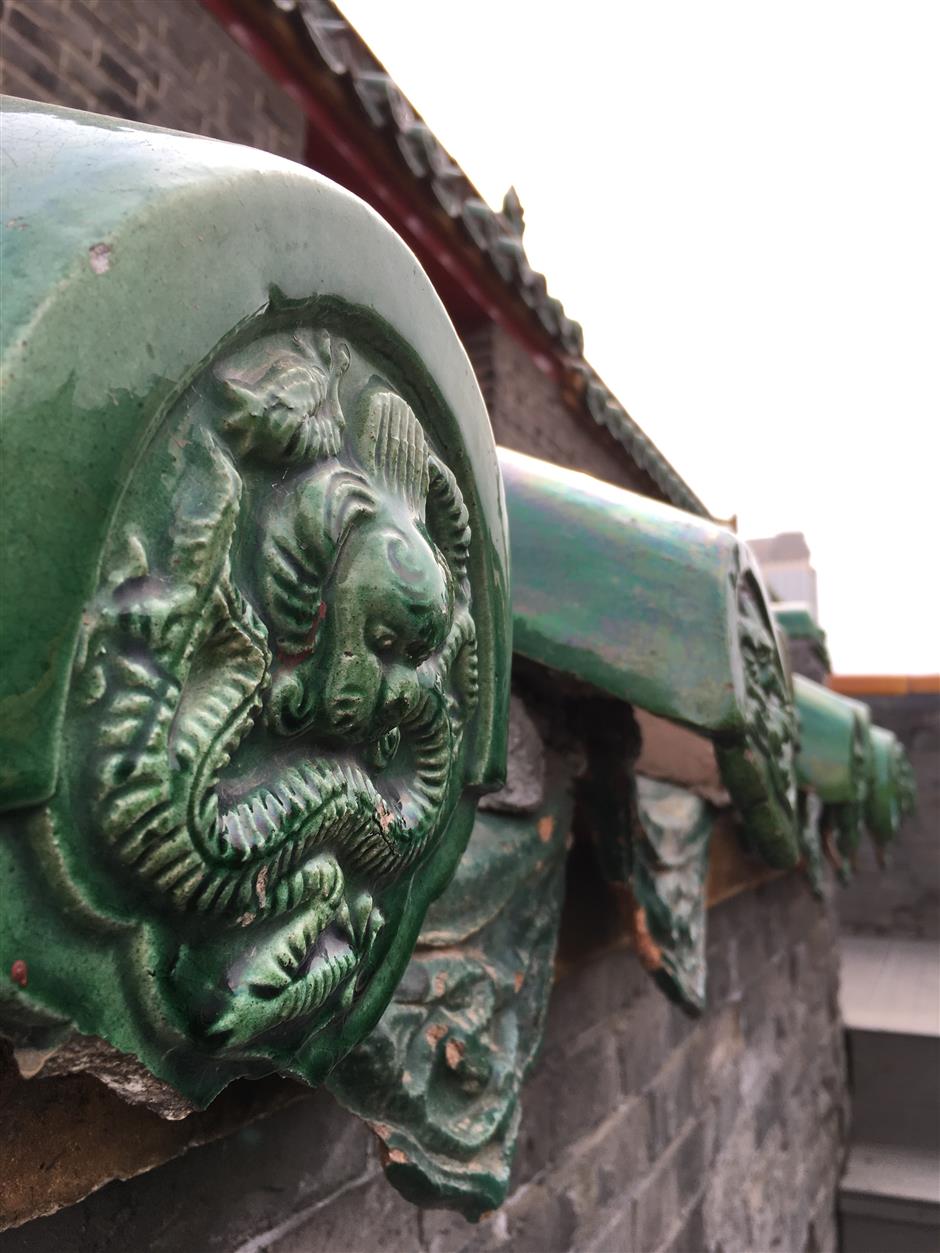 Legends aside, the Shenyang Palace Museum is a small but fascinating facsimile of the Forbidden City in Beijing, which is 12 times larger with over 9,000 rooms. However, Manchu culture is the centerpiece here.

One distinct difference lies in the roof style. In Beijing, the glazed tiles are all golden, indicating the supremacy of the imperial court. In Shenyang, however, golden roof tiles are edged with green, signifying the site’s inferior status to its Beijing counterpart.

Plaques and tablets here were written in two languages — Manchu on the left and Han Chinese on the right — just the reverse of those in the Forbidden City. And in contrast with the Han obsession with red, the Manchu tradition preferred white. So here, the door gods and couplets in the halls of the palace museum were often painted or written on white paper.

“After the Qing Dynasty completely replaced the Ming Dynasty in 1644, the Shenyang palace lost its status as the official residence of emperors,” said our guide. “Instead, it became a regional palace. Some called it peidu gongdian, or ‘companion of the capital palace’.”

A tour of the Shenyang Palace Museum offers visitors three routes — east, central and west — each built by Nurhaci, Huangtaiji and Qianlong, respectively. 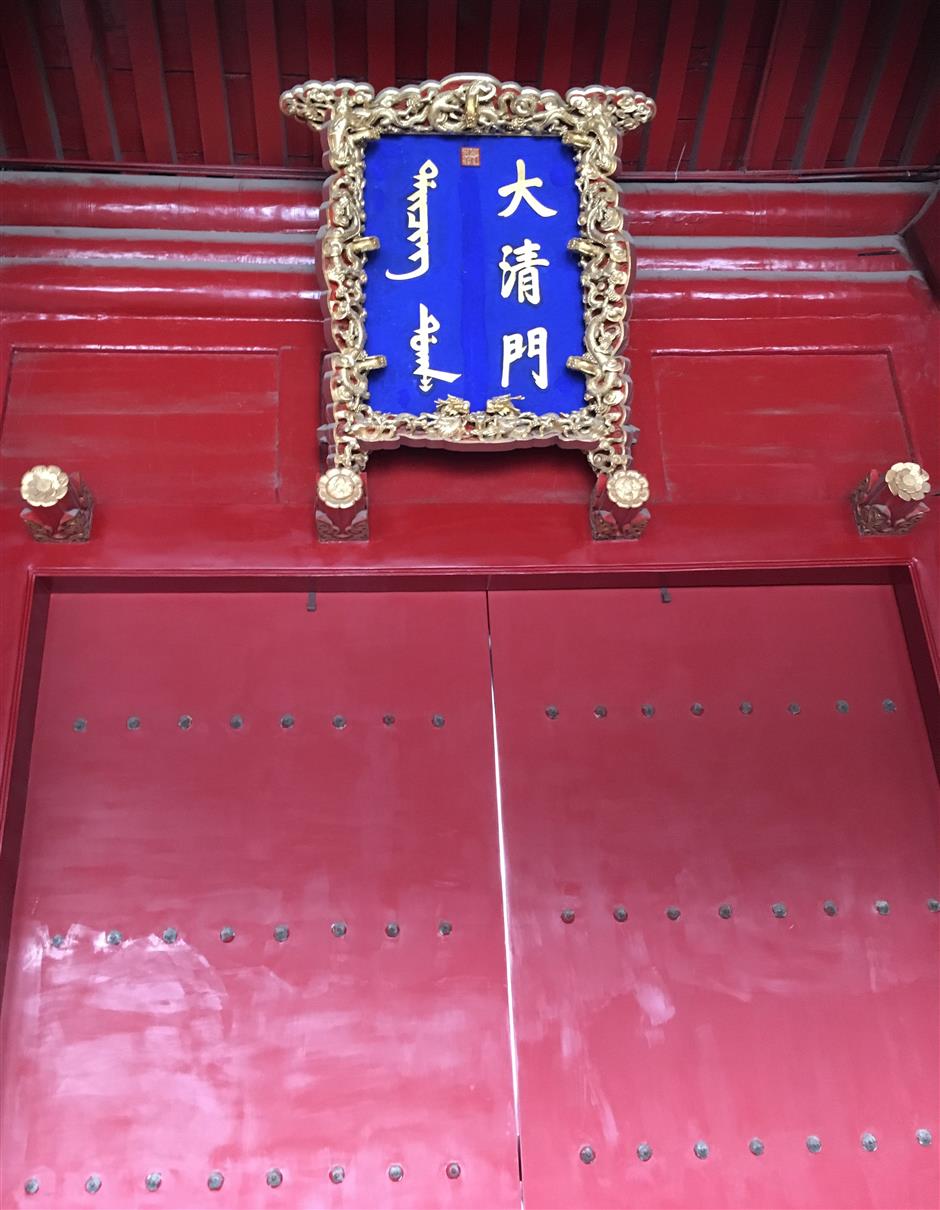 The Grand Qing Gate is the starting point of the central route.

The red Grand Qing Gate is the starting point of the central route. Upon entering, I was expecting to see the backdrop so common in period TV dramas, with hundreds of steps leading up to a main hall, just like the Supreme Harmony Hall in the Forbidden City.

I was, however, surprised to find the comparatively plainer structure of Chongzheng Hall, or Supreme Politics Hall, where Huangtaiji was enthroned and discussed affairs with his officials. Without many steps, it looks from outside just like any other palace hall. Visitors are prohibited from entering for preservation purposes, but I managed to crane my neck to look inside and was amazed by the solemn interior. 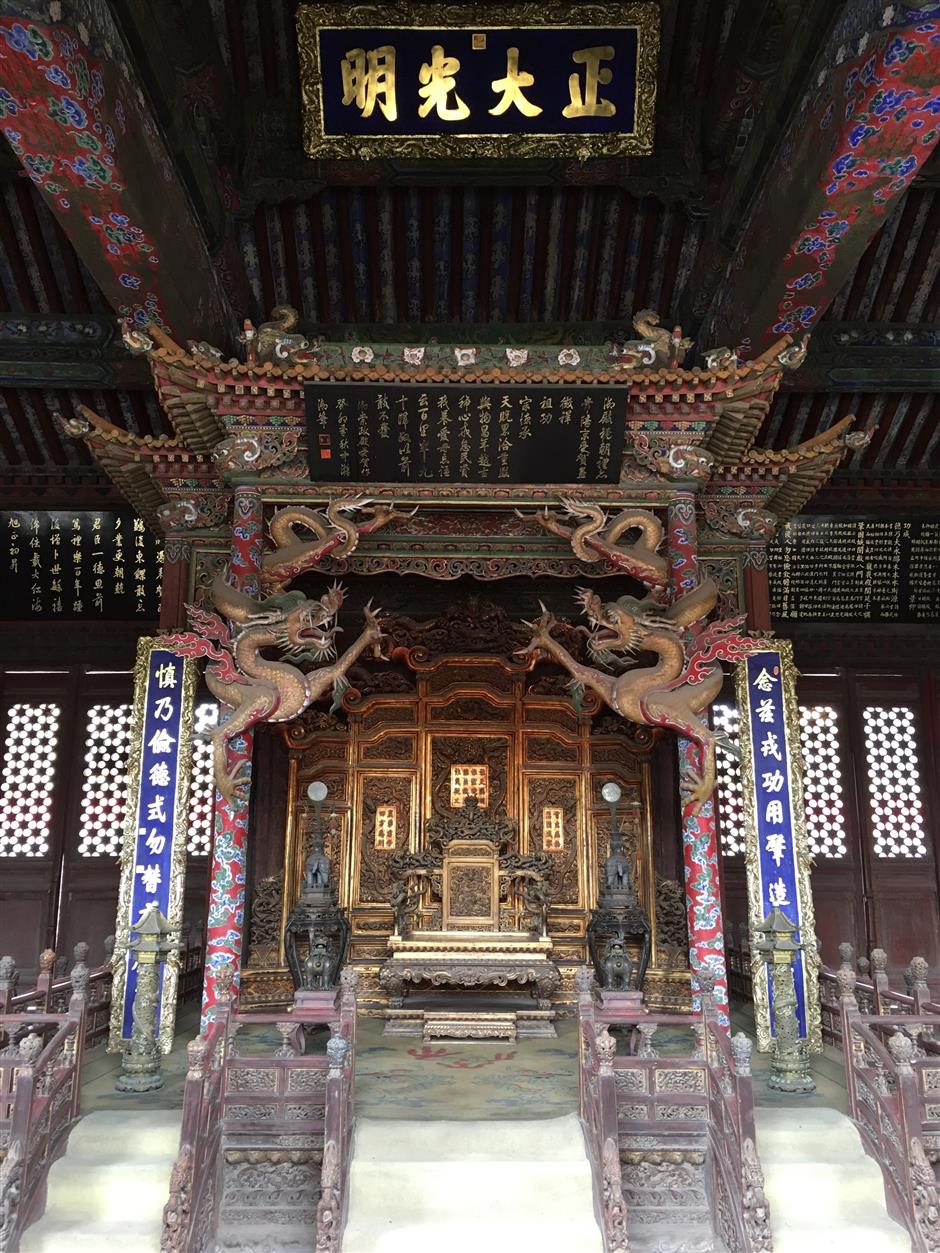 In Chongzheng Hall, or Supreme Politics Hall, Huangtaiji was enthroned and discussed affairs with court officials.

“Why are the structures here not like those in a Han palace?” I asked, perplexed.

“All buildings were strategically designed to ensure safety,” the guide explained. “Don’t forget these people were Manchu, a nomadic tribe. The residence buildings here were higher than the halls because Manchu people had to remain alert to attacks from beasts or other tribes even when they were asleep.”

Also, the structure of the residences provided more warmth from the freezing cold winters, she added.

Beside the major Chongzheng Hall, residence buildings comprise most of the central route. However, after a walk around, I couldn’t find any distinct residences for the emperor or empress, not to mention concubines.

“Didn’t the emperor and concubines need privacy?” I asked.

“In the Forbidden City,” my friend elaborated, “the empress and high-ranking concubines all had their own residences. But here, imperial concubines lived together.” 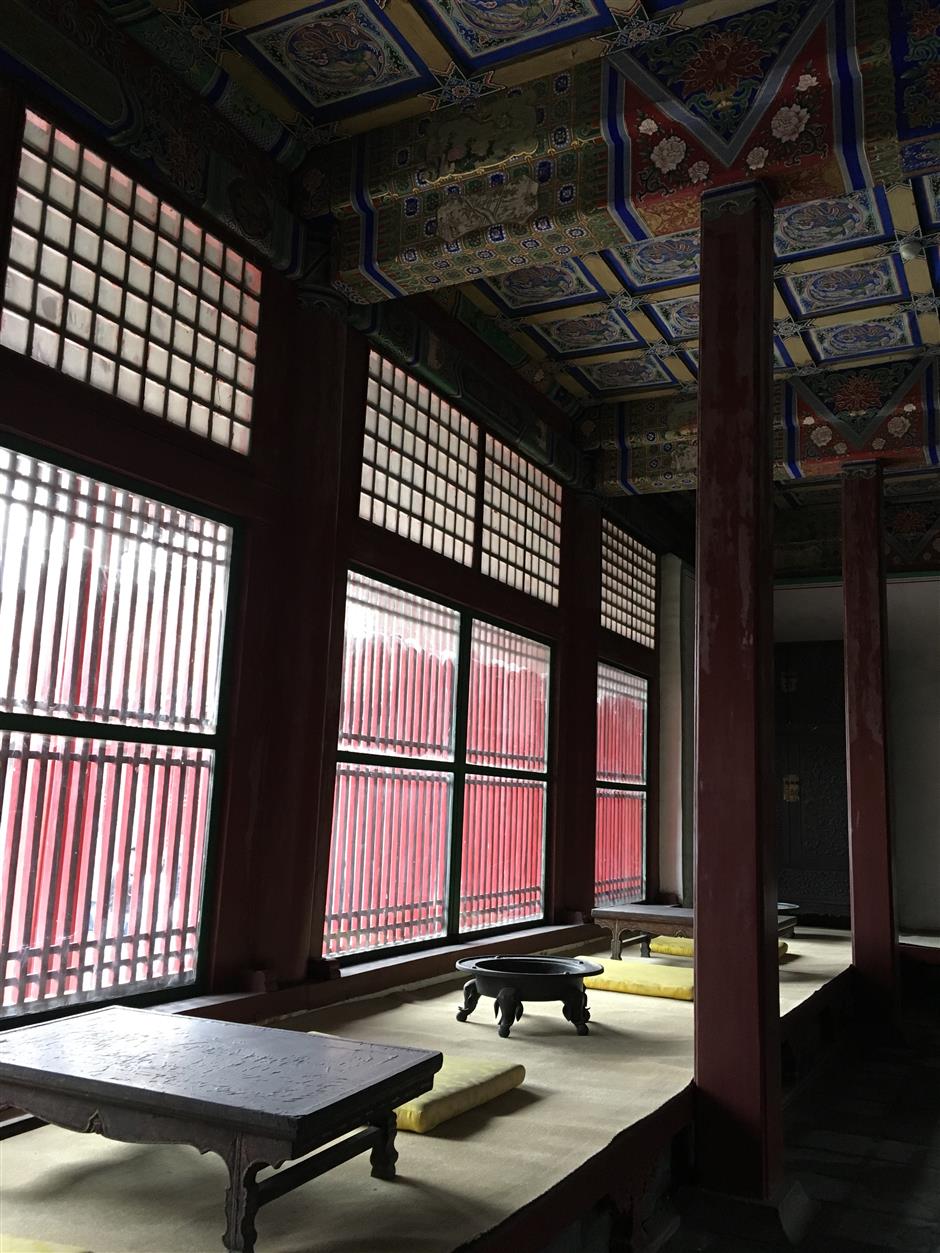 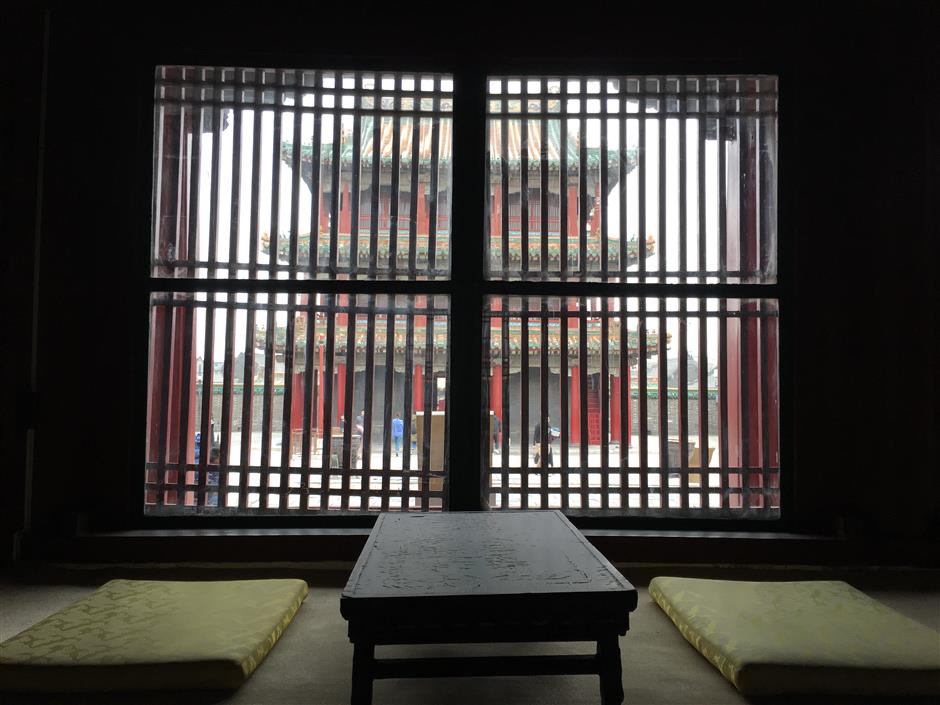 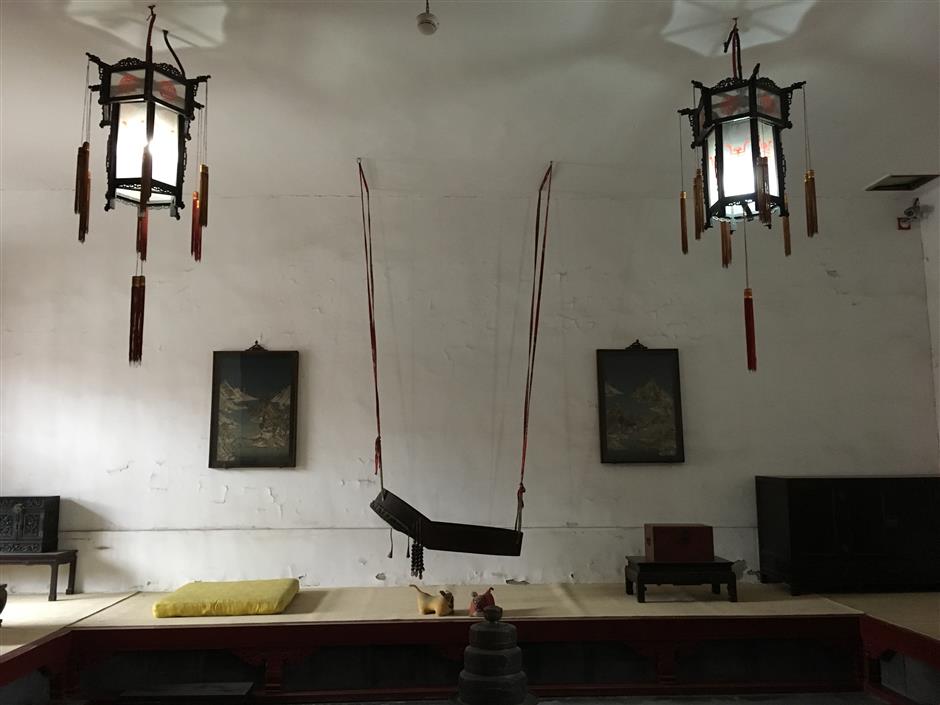 The Qingning Palace, for instance, built on a 3.8-meter-high platform, was the residence of Huangtaiji and his empress. The east chamber was their bedroom, while the western four rooms were reserved for Shaman sacrificial ceremonies and imperial entertaining.

Other concubines shared four palaces on both sides of the Qingning Palace, with side chambers for low-status concubines and maids.

“Maybe they just wanted to save space,” my friend said, with a laugh.

Continuing my exploration, I soon reached the east route. The first structure I saw was Dazheng Hall, or Grand Politics Hall, an octagonal building with multiple eaves and pavilion roofs. It was built under Nurhaci in 1625 to host important ceremonies and events.

Han elements are obvious in its wooden structure, mortice and tenon joints, flying eaves and brackets, as well as in the pillars with dragon designs. However, the Sanskrit ceiling inside exudes a strong ethnic essence.

In front of the Dazheng Hall stand the Ten Kings Pavilions, which served as administrative offices for tribal chieftains. The style of the structures is typical Manchu, which originated from the hunting tradition.

“The Manchu were nomads who often lived in yurts that were easy to set up and dismantle,” our guide explained. “So the style of the pavilions is like a yurt. Don’t expect the elegant style of regions south of the Yangtze River. This is more about functionality and practicality than good looks.” 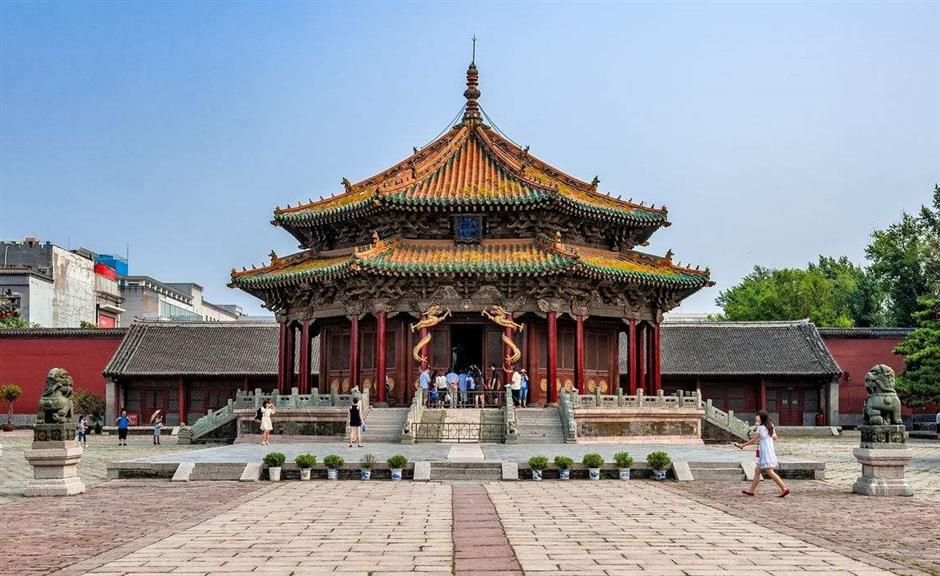 Dazheng Hall, or Grand Politics Hall, is an octagonal building with multiple eaves and pavilion roofs. 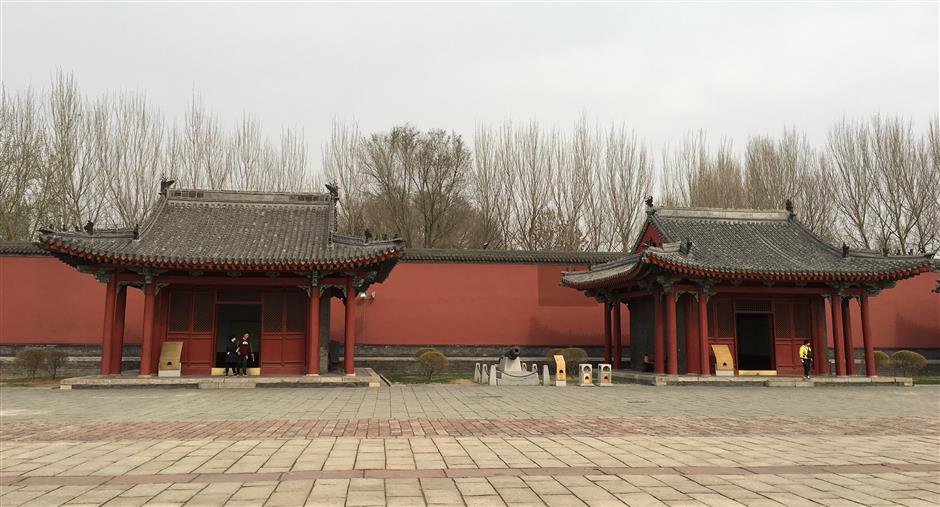 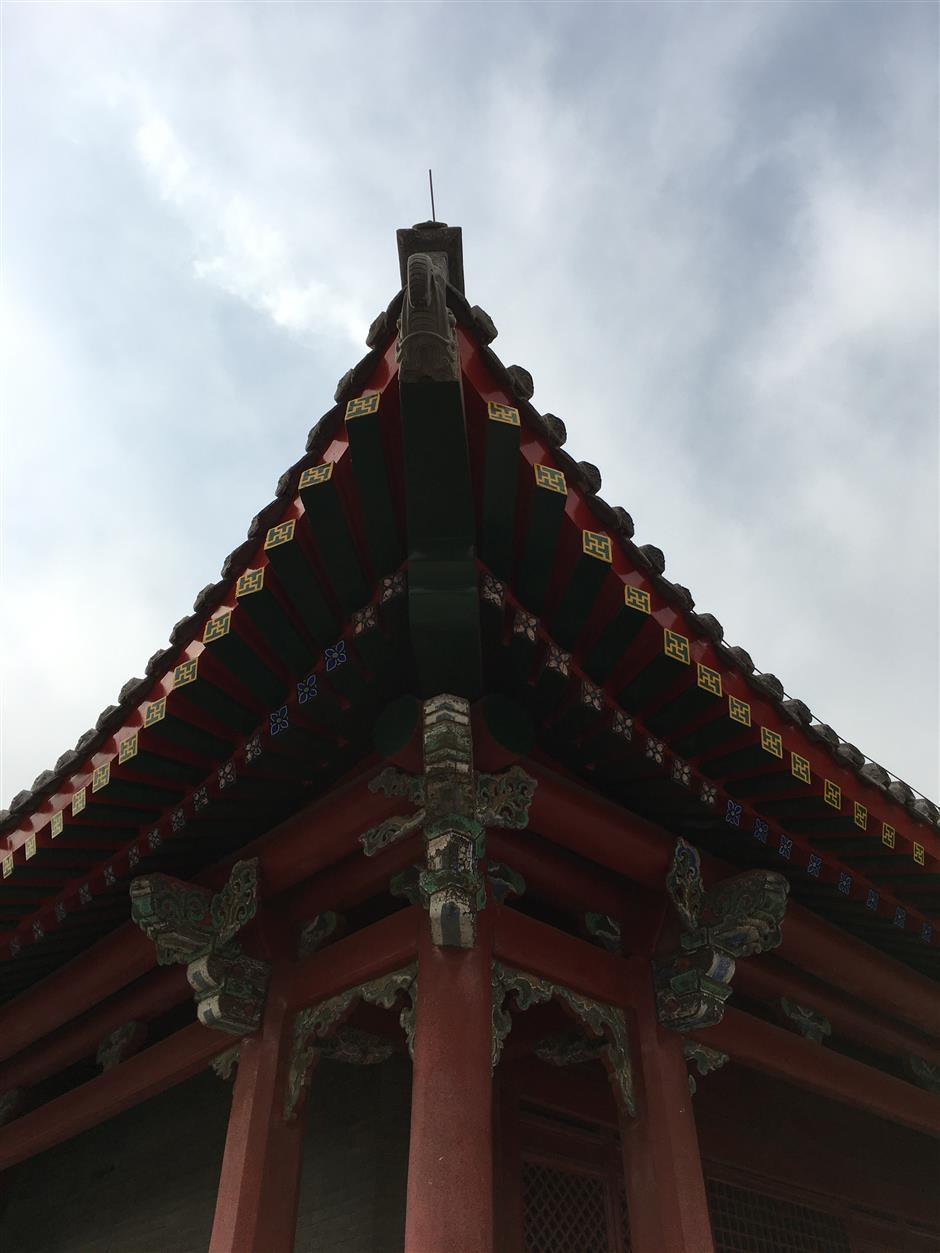 Over on the other side, the west route, built in 1782, is a relatively more “relaxing and entertaining” area where emperors enjoyed traditional operas, read and had libraries.

Winding up my half-day tour, I couldn’t help but admire the Manchu reverence for ancestors, which is highlighted in the Shenyang Palace Museum. Huangtaiji, for example, had the Chongzheng Hall built for his enthronement instead of moving into his father’s Dazheng Hall, as a sign of respect.

Likewise, Emperor Qianlong erected the Diguang Hall for his own residence during visits to Shenyang.

“The charm of the Shenyang Palace Museum lies in its cultural diversity, with dozens of ethnic groups co-existing in harmony,” said the guide.

In Shenyang, Manchu culture is well displayed not only in the imperial palace, but in the resting places of the Qing Dynasty founding fathers — Nurhaci and Huangtaijii.

Called Zhaoling and Fuling, they were added to the UNESCO listing in 2004. Zhaoling is in Beiling Park in northern Shenyang; Fuling is located in Dongling Park in the east. 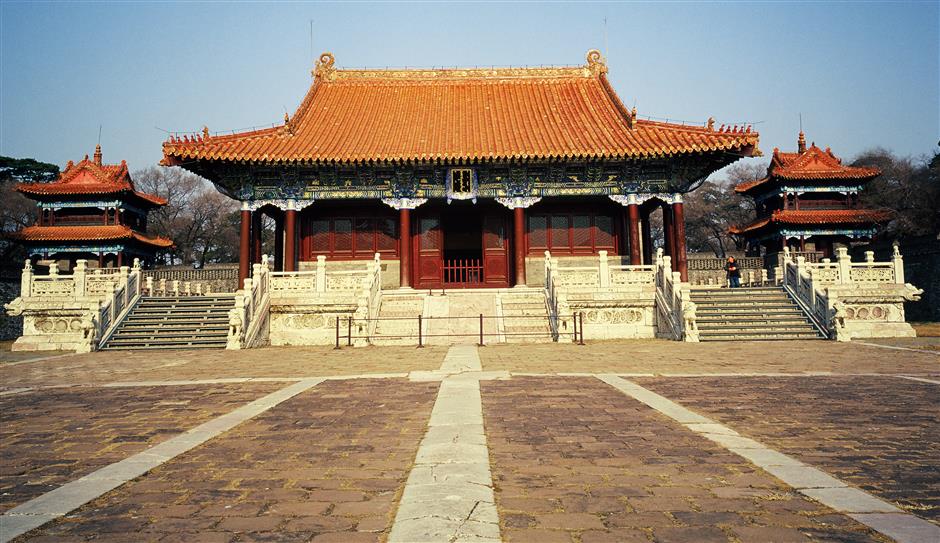 Zhaoling holds the tombs of Huangtaiji and his empress Bo’erjijite. Construction of the mausoleum began in 1643 and was finished eight years later.

The layout is divided into three parts from south to north by three buildings: the Horse Dismounting Tablet, the Red Gate and the Square City. The first two parts are used for worship and festivities; the third is the burial site.

The main structure consists of the Square City, the Crescent City, the Ming Pavilion and the Treasure Top. The most palatial place is the Longen Hall in Square City. Its floor is covered with gold, which glistens in sunlight. 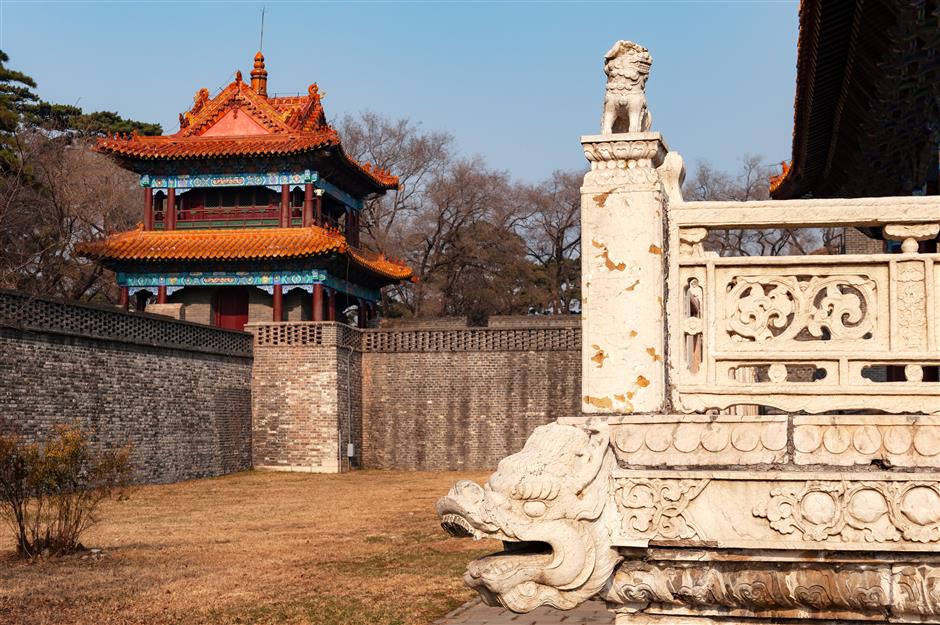 Emperor Nurhaci, founder of the Qing Dynasty, and his empress are buried here. The site is much smaller than that of Zhaoling.

Work on this majestic tomb began in 1629 and was completed in 1651. It was built against the backdrop of Tianzhu Mountain.

Like Zhaoling, the natural layout here is divided into three parts from south to north.

The first part is the Frontispiece. On both sides of it stand delicately carved stone lions, ornamental columns, memorial archways and stone tablets.

The second part is called the Sacred Way. Pairs of stone lions, horses, camels and tigers stand on either side of the avenue. At the end is the famous 108-step staircase symbolizing high imperial power.

The third part is the Square Castle, the main structure of Fuling. The castle is about 5 meters high. Small towers sit on its four corners. To the rear is Treasure Castle, which serves as the mausoleum of Nurhaci and his wife.