Towers sheltered locals from the perils of life

HUNDREDS of years ago, Kaiping in Guangdong Province was beset by bandits and floods, so the local people built watchtowers called Diaolou to provide refuge from scourges.

The structures, built of stone, brick or concrete, were mostly erected by emigres who returned home to the area from abroad in the 19th century. They are a hybrid of Eastern and Western architectures — a unique sight in the country and even the world.

It is believed that more than 3,000 Diaolou were built between the mid-15th century and early last century. More than 1,830 are preserved in the suburbs of what is today the city of Kaiping, about 120 kilometers from the provincial capital of Guangzhou.

In 2007, Kaiping Diaolou in an area of four villages were included in the UNESCO World Heritage List. UNESCO said the structures “display a complex and flamboyant fusion of Chinese and Western structural and decorative forms.” 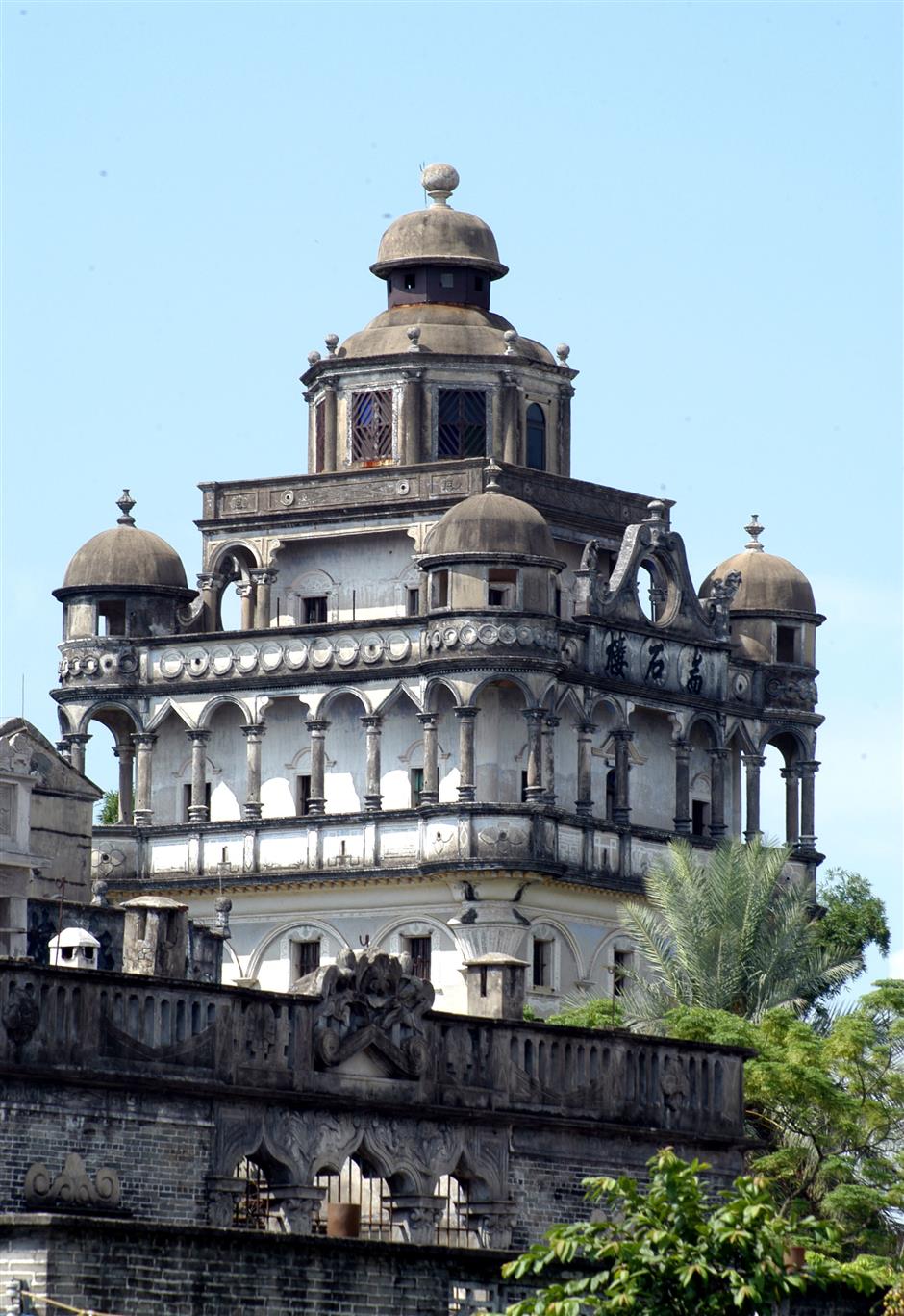 More than 1,830 are preserved in the suburbs of what is today the city of Kaiping, among which Ruishi Tower is a landmark of the cluster.

Local historical records show that the first Diaolou was called the Ruiyun Tower, built in the village of Jingtouli in 1644, the last year of the Ming Dynasty (1368-1644).

In an era of wars around the country, bandits and brigands became active in the area. At the time, a family surnamed Guan ruled Kaiping, and a family member named Guan Zirui built the tower to protect local residents.

The tower was so solid that it could also withstand periodic floods. Every time such a disaster occurred, villagers from the area would rush to the shelter. In 1884, a huge flood hit the area, and all the residents survived in the tower.

Although the watchtower did not survive time, it opened the door to a new concept of self-protection for local people.

In the mid-19th century, the people in Kaiping suffered from frequent conflicts with the Hakka people. As their living environment worsened, many boarded the ships to look for a new life on the other side of the Pacific Ocean. They became either miners in the American and Canadian gold rushes or laborers on railway construction.

Before long, however, most of the Kaiping laborers in the US were forced to return home when the China Exclusion Act was enacted in 1882. Once again, they settled in Kaiping, built houses and started families.

The warfare and bandits persisted, however. People again started to build Diaolou as fortresses, watchtowers and sometimes residences. The structures proliferated into the early 20th century.

The experience of working overseas broadened the minds of Kaiping returnees. They blended architectural elements they saw in North America in the Diaolou, including vaults, archways, marble pillars and ambulatories — features not seen in China.

The interior decor of many towers melds Western and traditional Chinese styles.

The towers are usually divided into three types: public towers, or zhonglou; residential towers, or julou; and alert towers, or jinglou.

The public towers were financed either by an entire village or by several families who each took a room in the tower. About 26 percent of the Diaolou in Kaiping are public towers, decorated without much artistic flourish.

Residential towers were usually built by wealthy locals. They resembled small castles used for both defense and daily life. The towers usually had complete amenities and were decorated both inside and out. They became landmarks of the villages and drew sightseers.

Alert towers were usually built at the gates of a village or on hills or riverbanks. They were typically equipped with alarms and searchlights, and served as village sentries. People on duty there could spot enemies and alert people to take refuge in other Diaolou.

After 1949, when social upheaval mostly stabilized, people gradually stopped building Diaolou. Many of the residential towers were abandoned when their owners decided to move abroad in the 1950s.

Today, parts of the Diaolou have been restored and opened to the public. We take a closer look at the more prominent structures.

About 22 kilometers from downtown Kaiping, the village was founded by a family surnamed Huang in the late 19th century.

Local records show that Huang Yigui, an elder in the family, strictly regulated how buildings in the village should be constructed. The layout of the village is so neatly ordered that it looks like a modern neighborhood.

Three Diaolou are listed in the village, among them the nine-story Ruishi Tower is a landmark of the village and of the entire Kaiping Diaolou cluster.

Five Byzantine-style vaults on the top and an open-ended walkway with ionic columns give the towers the appearance of a castle in the air.

The concrete tower, equipped with searchlights, was so solid that the village was never attacked after it was finished in 1925. 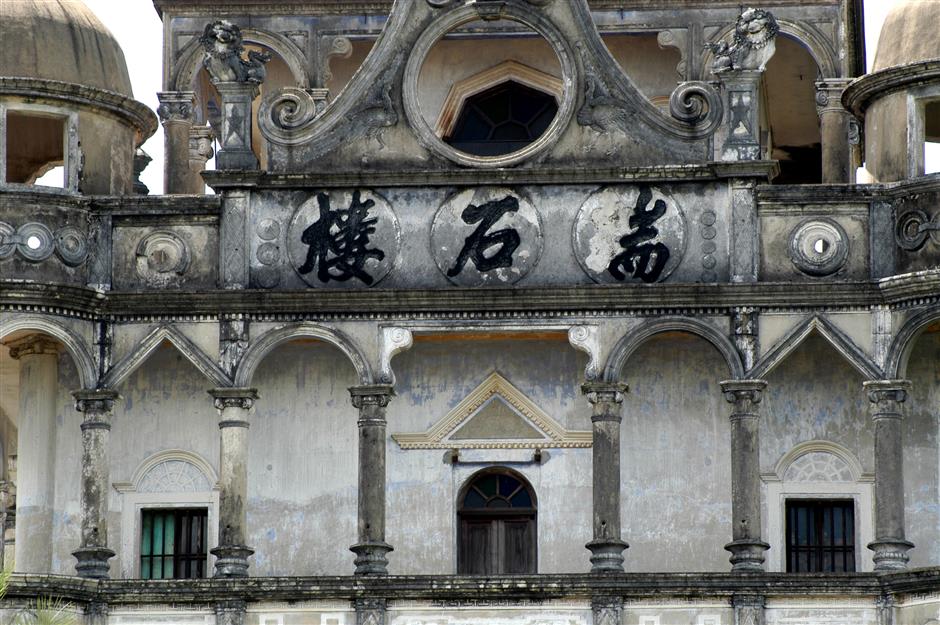 Ionic columns and Byzantine-style vaults give Ruishi Tower the appearance of a castle.

The owner of the tower was Huang Bixiu, son of Yigui. He and his two sons ran a traditional Chinese medicine pharmacy and a private bank in Hong Kong. When he heard about the banditry in Kaiping, he ordered the tower to be built to protect his parents and wife, who still lived in the village.

It is said that Huang had a conflict with his father when building the tower. His father had decreed that no building in the village should be higher than six floors, but Huang Bixiu insisted the tower be built exactly according to his design, which is the “tallest, most luxurious and magnificent Dioalou” in the area.

Zili Village, about 12 kilometers from downtown Kaiping, is the home of 15 Diaolou, most of which are residential towers in a Western architecture style. The towers are scattered in an area of melon fields and lotus ponds. Walking through the area revives the aura of a century ago, when the atmosphere of the old American frontier west prevailed.

The most magnificent Diaolou is Ming-shi Tower. The six-story tower is known to most Chinese people because of the movie “Let the Bullets Fly” (2010), directed by Jiang Wen. In the film the tower was the backdrop of the home of a local tyrant. Tourism to the village soared after the movie was released. 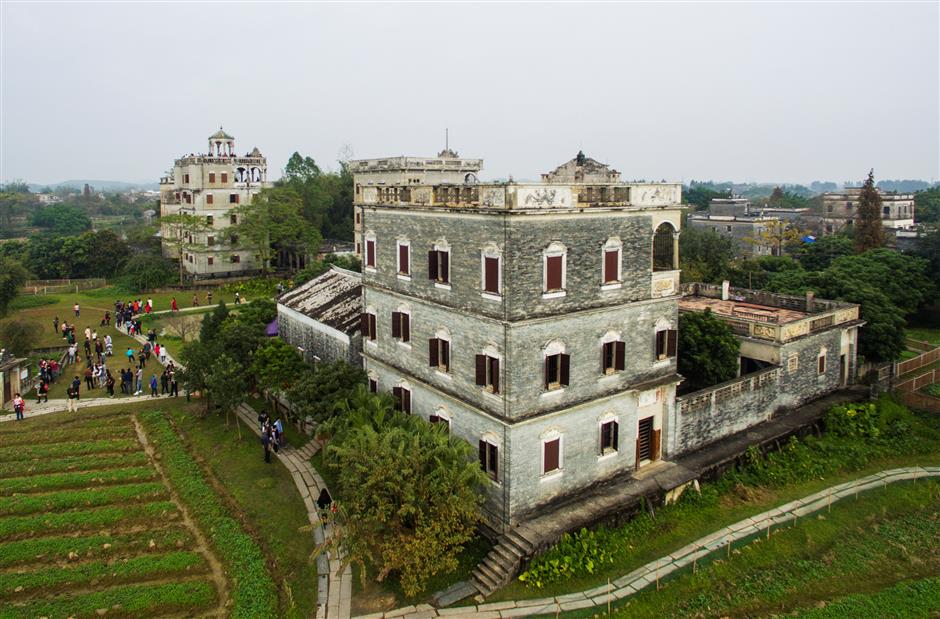 Mingshi Tower became a favorite destination after it was featured in a Chinese movie.

Built in 1926, the tower was owned by Fang Runwen, a businessman who owned a Chinese restaurant in the US before returning to his hometown. Back in the village, he operated a grocery store, soon becoming the richest person of his time in Kaiping.

After he died, his family left for Hong Kong and the US in 1953, but they didn’t take with them any furniture or ornaments from the tower, so the original interior is well preserved.

Four family oil paintings are still hung in the living room of the tower. Cast iron ceiling lamps, stained glass screens, classic-style chaise lounges and wooden carved beds remain where they were a half century ago — a testament to a prosperous family.

Built on a hill and surrounded by water, Majianglong is the most beautiful village in Kaiping. The site faces the Tanjiang River, with Baizu Mountain at its back.

Some 13 Western-style Diaolou are hidden in the bamboo forest that covers the mountain. From afar, it looks like a European alpine town rather than a traditional Chinese village.

Tianlu Tower is perhaps the most recommended of all. Built in 1925, the seven-story structure financed by 29 families is a typical public tower.

It has 29 rooms on the first to fifth floors, one for each family. Villagers knew that bandits kidnapped only men, so every evening, the men from the 29 families would stay in the tower, which came to be known as “the Men’s Tower.” The men took turns standing sentry on the seventh floor.

Today, parts of the tower still belong to the descendants of a fundraiser named Huang Delin. Before moving to Australia, he was a businessman in the village. Because most of the villagers were farmers and couldn’t afford to pay for the tower, Huang forked over the full cost upfront, and villagers repaid him by buying rooms.

The tower was still in use after 1949. It is recorded that the village had three massive floods in the 1960s, and each time all the villagers survived by taking a refuge in the tower.

At Kaiping Yici Bus Station, there are several bus routes connecting with the suburban villages where the Diaolou are located.

Several routes are recommended by the Kaiping government at http://www.kptour.com/strategy/list1.aspx?cls=13, but only a Chinese version is available.