The unparalleled beauty of the Three Parallel Rivers region

In the southwestern province of Yunnan, three great rivers originating from the Qinghai-Tibet Plateau run parallel for about 300 kilometers in separate valleys flanked by steep mountains. They never intersect.

The Nujiang, Lancang and Yangtze rivers form an area officially called Three Parallel Rivers. It is a haven for plants and animals, and home to diverse ethnic groups that have lived there for thousands of years.

Travelers to the area can’t practically see all of the parallel rivers region, but there are plenty of excursions available to explore the landscape and its population, including mountain hiking and touring through ethnic towns. Unfortunately, a road construction project in the Nujiang Valley area this year prevents travelers from visiting several beautiful villages along that route.

However, there are many places that come highly recommended by experienced travelers. Here is a sampling.

About 70km from Lijiang Old Town, a commercial center in northwest Yunnan dating back to the 1300s is the town of Shigu. It is off the beaten tourist track just enough to retain a quiet charm.

The name of the town literally means “stone drum,” a tribute to the marble stela in the shape of the drum in the center of the town. Shigu seems to have been bypassed by commercialism, retaining features such as flagstone roads and traditional wooden houses.

The town is the birthplace of chickpea noodles, a snack popular in Lijiang.

Here, visitors can enjoy the most authentic version, either cold and dressed with soy sauce and vinegar, or grilled with a chilli dipping sauce. 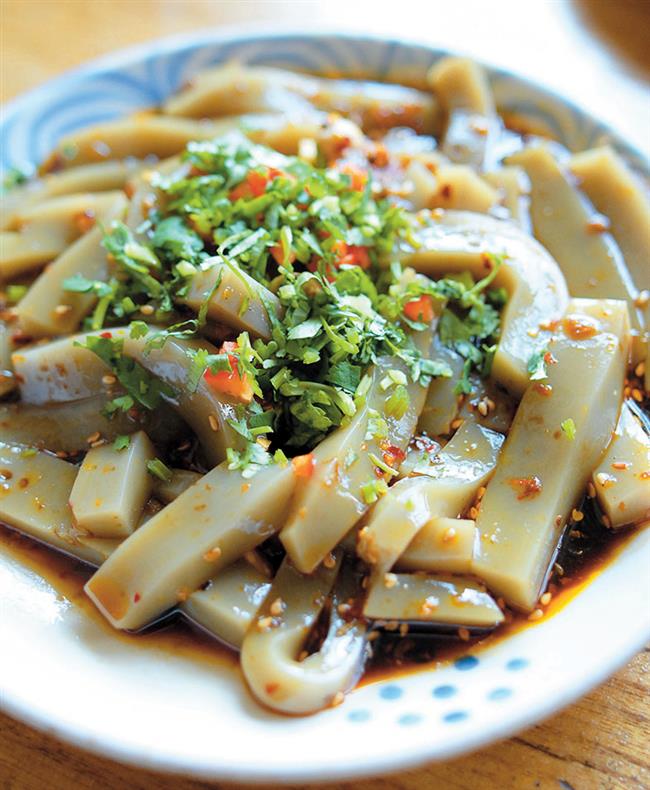 Near the town there is an observatory from which one can view the first bend of the Yangtze River. Here, China’s greatest waterway is called the Jinsha River. It takes a sharp turn of up to 140 degrees before running straight toward central China.

The first bend of Yangtze River

From the observatory, the full view of the river’s U-turn is visible. The clear running water, a wide shoal in the middle of the river and adjacent green fields create a picturesque landscape.

Visitors can choose to take a rubber boat trip, drifting with the running Yangtze. The thrilling but safe trip costs 140 yuan (US$20).

“The landscape along the way is gorgeous, and on the shoal, vendors sell grilled fish, all caught from the river,” said Mu Xingyan, a Shanghai visitor who just returned from Yunnan. “That was one of the best fish I’ve ever eaten.” 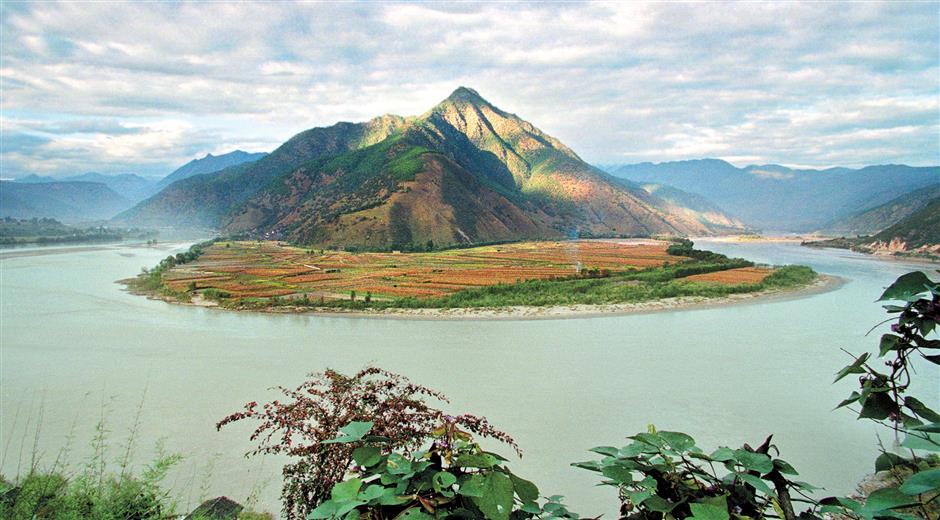 For people hoping to see a splendid lama structure, the Feilai Temple will be disappointing. Though it boasts a history of more than 300 years, it’s very small, with just several resident lamas, and, some say, a cat and a rooster.

But the destination is still regarded as one of the can’t-miss sites in the area because of its unique position facing Kawagarbo, the main peak of the Meili Snow Mountain. If one gets lucky and there’s no fog, the “sun shining on the golden mountain” can be a once-in-a-lifetime experience.

Covered in snow year-round, the summit of Kawagarbo looks like a diamond against the blue sky. And every day at sunrise, the “diamond” is gilded with golden leaf.

Sunrise in the area occurs at about 8am. Visitors can find accommodation around the temple or in nearby Deqin County. The popularity of the “golden mountain” view has boosted commerce in the area with restaurants, fine hotels and B&Bs.

From an observatory near the temple, one can see why Kawagarbo is regarded as a holy mountain by local Tibetan Buddhists. The mountain has an unconquerable look, and, in fact, it has never been successfully scaled. Climbing the mountain is considered taboo among locals because they believe their guardian gods live there. It’s said that if any mortal reaches the summit, the gods will depart and disaster will befall the local people.

In 2001, the Deqin government passed a law forbidding mountaineering on Kawagarbo. Before that, several attempts were made to scale the peak, but all ended in failure. In 1991, 17 climbers from China and Japan were killed in an avalanche at a 5,100-meter-high campsite on the mountain. No climber is known to have ever reached the 6,740-meter summit, the highest peak in Yunnan.

No one knows what place British author James Hilton had in mind when he described Shangri-La in his novel “Lost Horizon.” It was supposed to be a fictional place on the northwestern side of the Himalayas. When the novel was published in 1933, the Yunnan town, known today as Shangri-La, was named Zhongdian. In 2001, the locals changed the name because they thought the scenery described in the novel described their environment almost perfectly.

Potatso National Park is probably the best place to enjoy “the sun and moon in the heart,” the literal Tibetan language meaning of “Shangri-La” mentioned in the novel. It has mirror-like lakes, lush green pasturelands, wetlands ornamented by colorful flowers and vast forest with birds and animals.

The park changes appearance with the passing seasons — flower blossoms in the summer, colorful leaves in the autumn, clear reflections in lakes on sunny days and foggy mists shrouding the mountains on cloudy days. Animals idly graze in the pastures. 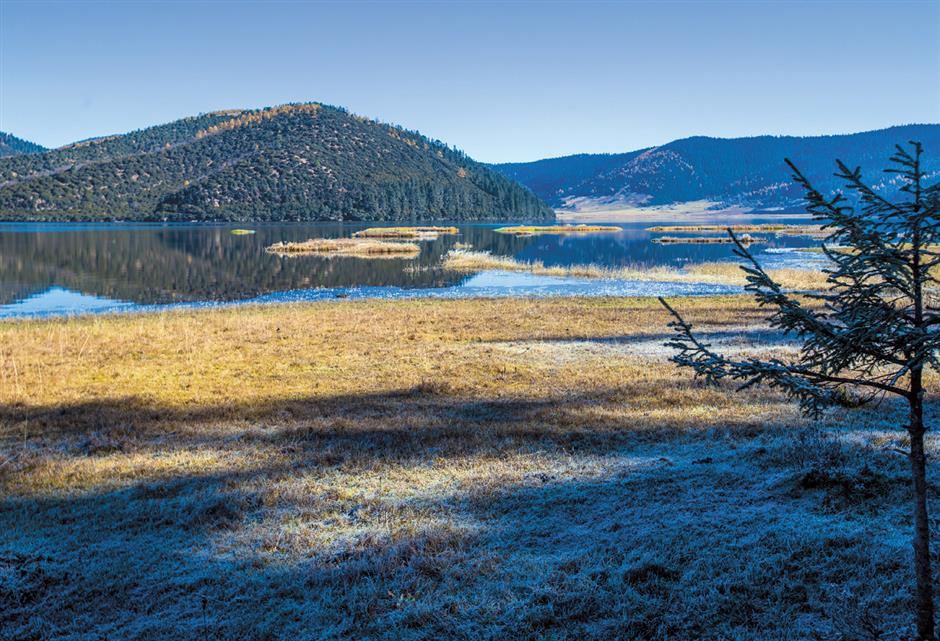 For people interested in Tibetan Buddhist culture, visiting the Ganden Sumtseling Monastery should be on their itinerary. The mountainside monastery, with a history dating back 500 years, looks like the Potala Palace in Lhasa from the outside.

The halls of the temple are decorated with murals and prayer flags. The lighting inside is so dim that the interior evokes the feeling of stepping into another world. Many visitors describe it as a true soul-cleansing experience.

“I saw how local people prayed there, hundreds of them,” Harry Su commented on online travel service Ctrip.com. “And suddenly it felt like anything earthy didn’t belong there. I could feel only a deep sense of tranquility rising from the bottom of my heart. That was the moment I acknowledged the power of faith.”

Visitors can pre-book the trip from any online travel service or car rental agency, such as Ctrip.com and Mafengwo. Although public transport is available here and there, it is still not very convenient if you want to venture deep into mountain areas. Visitors can stay overnight in Lijiang, Deqin or Shangri-La.

The area has a large temperature gradient between morning and night. Even in summer, travelers are advised to bring along a coat. Sunscreen is also necessary in the high-altitude area.

Although serious altitude sickness is not as prevalent as in Tibet, precaution is still needed.

Travelers should carry high-protein, high-energy snacks with them, such as beef jerky and chocolate, to boost their physical stamina.

Special Reports
ADVERTISEMENT
61820
,
Restored admiration for Zhu family in Songjiang
An island park so close to downtown but still obscure
Hangzhou enticing non-natives to stay put over holiday
New look and a new life for the old street
Let an umbrella be your smile! A town with plenty to be happy about
Rainbow colors among sports park's green
What's on in Songjiang District in January
Western-style villas from a bygone era in Shanghai
Yuhang policy bears fruit in tea culture
An ancient king who carried cultural secrets to the grave
EXPLORE SHINE