Delhi teems with surprises and color, contrasts and culture

My friend Bao Yan was in Delhi for business again. When I asked him how it was this time, he replied: “Dramatic as usual. This morning as I opened the door, I found a peacock squeezed between the flower pots on the porch ...”

How very lovely! And how true. India’s capital offers endless surprises to even the most seasoned traveler. Nestled on the banks of the Yamuna River, the sprawling metropolis is the political and cultural hub of the country.

“Every time I return to Delhi, I get a sense of freedom,” said Parul Rewal, a Delhi native and architect who has lived abroad most of the last decade. “It’s hard to explain. Both India and the US are democracies, but if you were in the US, can you imagine being able to do anything you want, whether hawking your wares or even urinating alongside public streets?”

She added: “But Delhi is not pedestrian-friendly. It’s better to use underground transport network so you don’t get stuck in endless traffic.”

Right! So that’s what I did when I joined Bao to visit the city of nearly 19 million people in January. It is a city with one of the highest-density populations in the world.

Brimmed with endless contradictions, where the new and old and the rich and poor coexist, Delhi is littered with stories. It has been the historic capital city for several different empires.

The most famous tourist attractions are along the city’s yellow and violet lines on the Metro map. On the first day in Delhi, we visited India Gate and the National Museum along the Yellow Line. 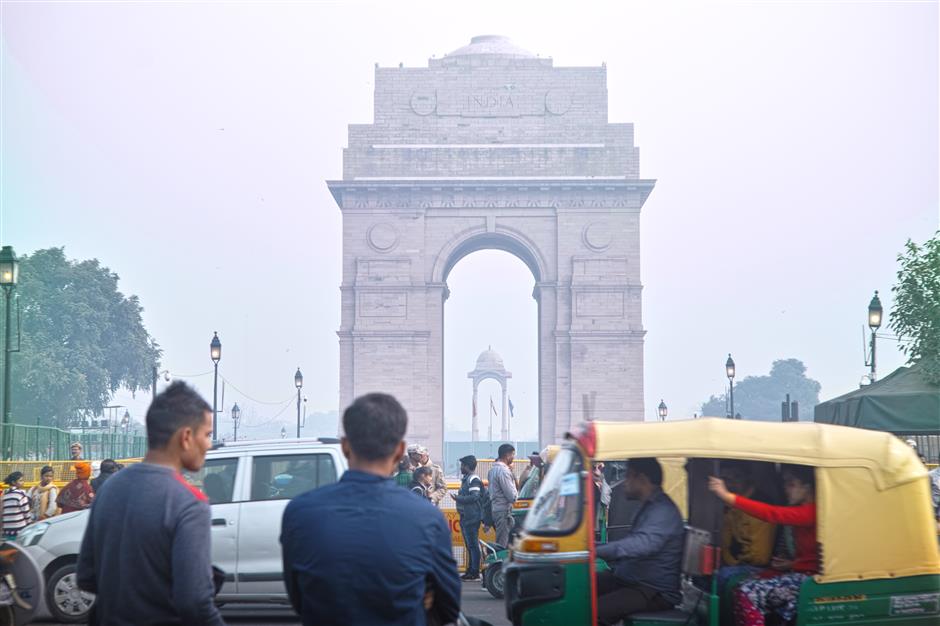 The India Gate is a war memorial honoring soldiers who fought and died during World War I. Its construction began in 1921, and the monument was inaugurated in 1931.

When we emerged from the Central Secretariat Station, rehearsals were under way on the vast Rajpath Boulevard for ceremonies marking the Republic Day national holiday.

The annual parade showcases India’s defense capability and its cultural and social heritage. The rehearsals gave us an exciting glimpse of floats and aerial displays.

A highlight of the parade was a couple of floats commemorating the life of Mahatma Gandhi prior to his assassination in Delhi in 1948:

Gandhi using a spinning wheel to make his own clothes; Gandhi, with walking stick, leading followers in the so-called Salt March against British colonial rule; Gandhi at a prayer meeting where Muslim prayers were reading alongside Hindu and Christian prayers; Gandhi behind bars wearing a simple loincloth to protest against discrimination against the “untouchables” caste.

The floats impressed me. I couldn’t help but think that Gandhi’s philosophy of civil disobedience and the history of Indian independence are still relevant in the 21st century.

After watching the rehearsal parade, we visited the nearby National Museum, which is devoted to Indian art history and iconography, and Buddhist studies. All three major schools of Buddhism — Hinayana, Mahayana and Vajrayana — are represented here. 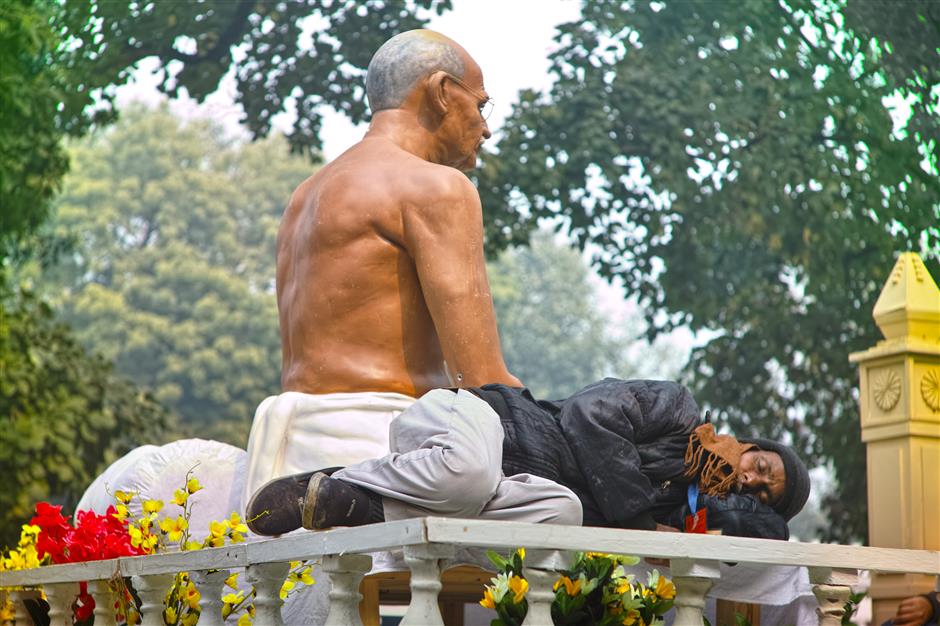 A man sleeps soundly under the watchful eyes of the Mahatma Gandhi. 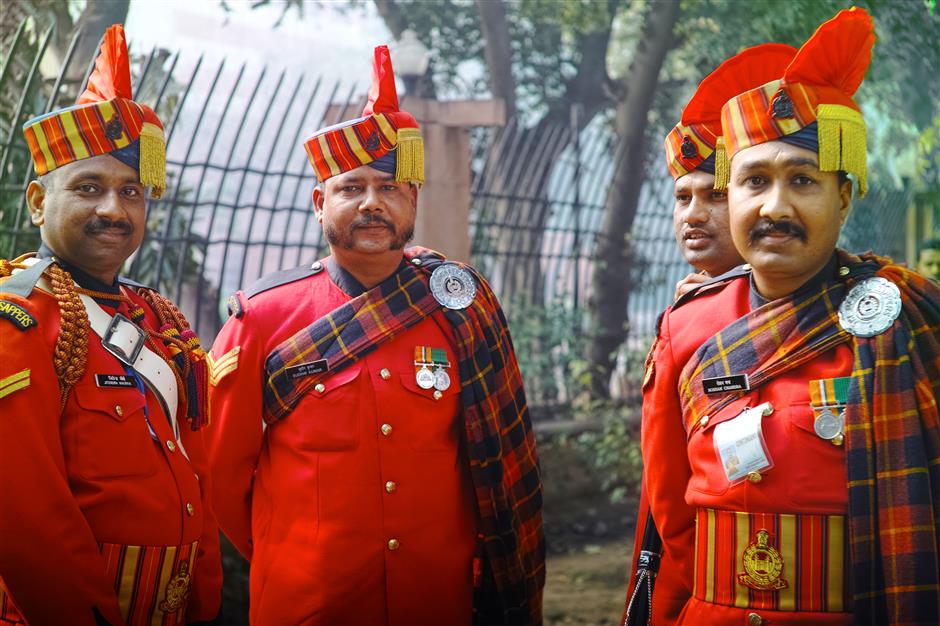 Soldiers dressed in ceremonial uniform for the Republic Day rehearsals

The Buddhist Art Gallery has a large number of images of Buddhist deities. The Buddha head from Sarnath is one magnificent example, as are the slabs depicting scenes from Buddha’s life.

Buddhism did not remain confined to India. The beautiful silk paintings and stucco heads remind us of the spread of Buddhism into Central Asia, and the popularity of the Buddhist faith in Southeast Asia is evident from the bronze images of Maitreya and Avalokiteshvara created in that region.

We also saw one of the original relics of Gautama Buddha, which was returned to India by Thailand.

Several tour groups kneeled in front of the golden pagoda of the Holy Relics, chanting prayers. The sight of such sacred pilgrimages was truly unforgettable.

A little further along the Yellow Line, we arrived at the Qutab complex. The Qutab Minar, a 73-meter-high, five-story victory tower, was constructed by different dynasties of the Delhi Sultanate, beginning in the late 12th century.

Its style is patterned on the Minaret of Jam in Afghanistan, with local embellishments. The tower was closed to the public after a staircase lighting failure in 1981 caused the deaths of 47 people, mostly schoolchildren.

The tower is one of several attractions in the complex. There are also ruins of red sandstone walls and carved marble columns in various stages. We actually found it quite picturesque. 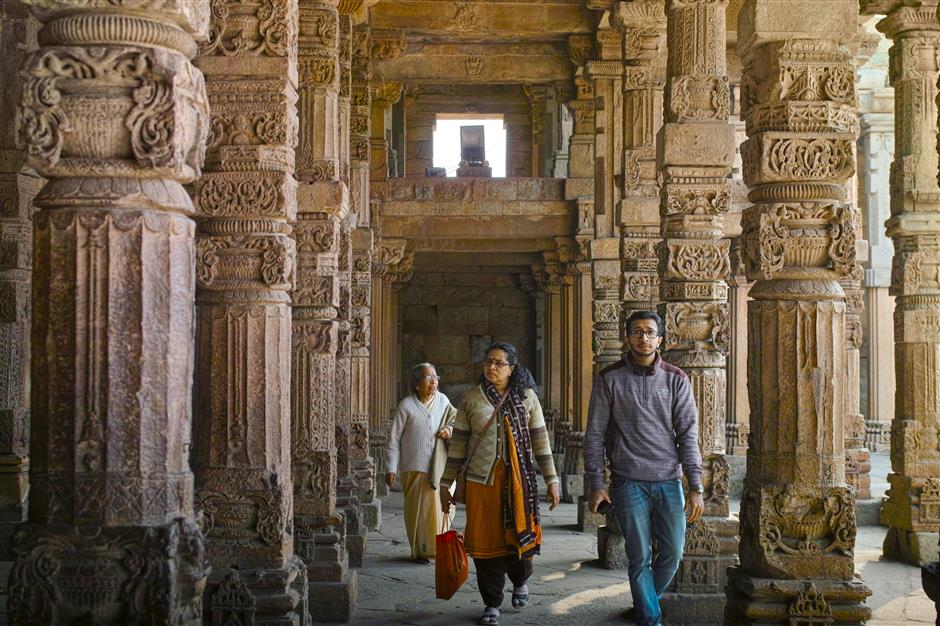 The next day we hopped on the Violet Line to visit the Delhi Red Fort and the Jama Masjid, one of the largest mosques in India.

Listed as a UNESCO World Heritage Site, the fort served as the residence of Mughal Emperor Shah Jahan (1592-1666). The Jama Masjid, less than a kilometer away, was built in 1656. It was the Mughal emperor’s last monument — an architectural marvel that showcases the creativity and innovation of the once vast empire. It’s said that the courtyard can accommodate up to 25,000 people.

That evening, we soaked ourselves in the emotional prayers at the Gurdwara Sis Ganj Sahib, one of the historical gurdwaras, or Sikh temples, in Delhi.

After removing our shoes and covering our hair, we sat in the main hall on the rugs amid locals who were seeking some tranquility after a day’s work in a noisy, teeming city. A friend of ours fell asleep to the soothing rhythm of the prayers, while Bao adhered to the gurdwara custom for men by polishing another’s shoes in the checkroom. 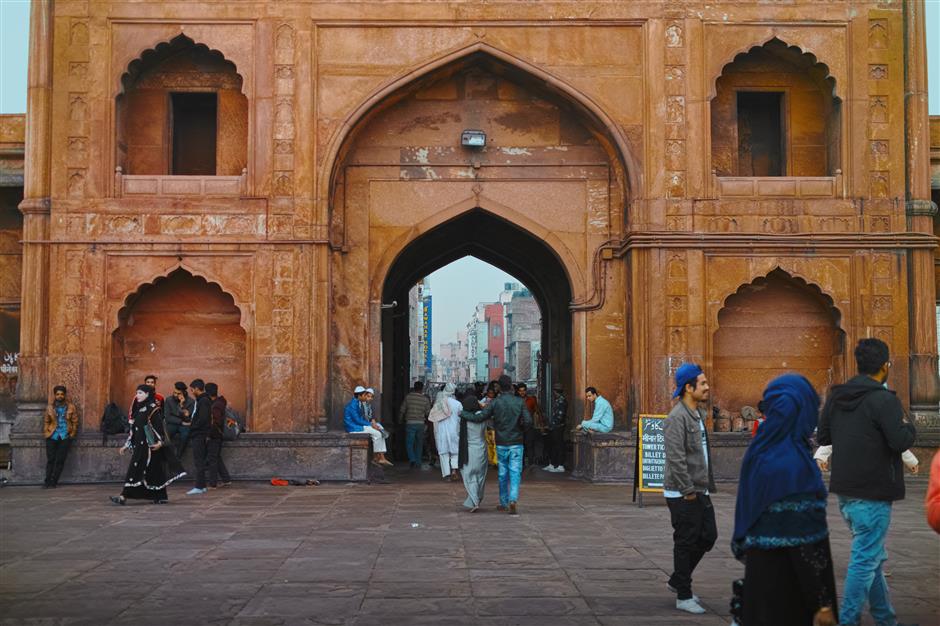 The Jama Masjid of Delhi is one of the largest mosques in India. It’s said that the courtyard can accommodate up to 25,000 people. 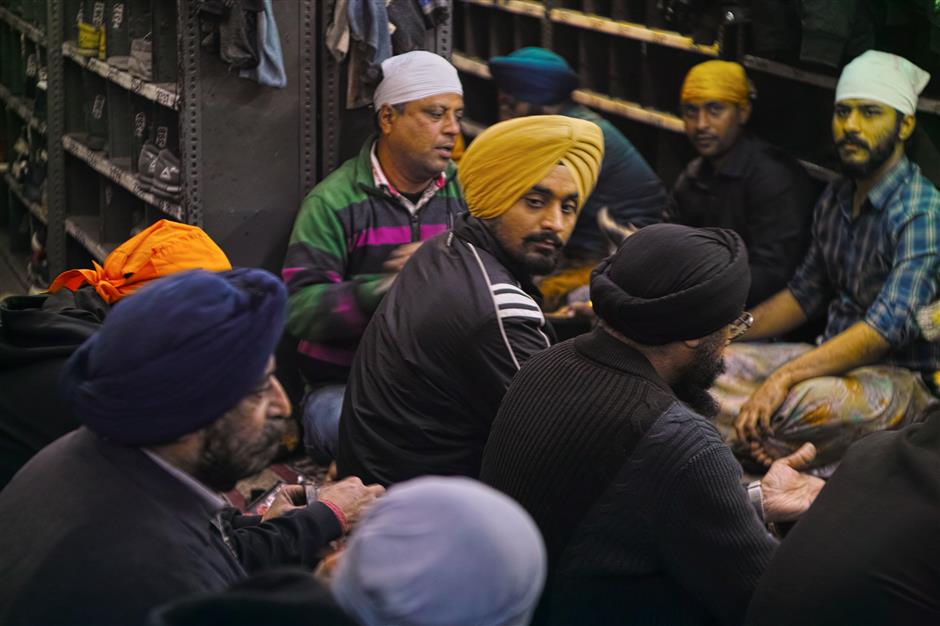 Men polishing one another’s shoes in the checkroom is part of the custom of worship in the gurdwara tradition.

On the last day of our trip, we watched Mr Om, our hotelkeeper, feeding eagles in the neighborhood at the break of dawn.

We indulged in some shopping for the cotton printed kurtis at the Fabindia outlet in the Khan Market. We ate roast mutton at Karim’s, a Muslim restaurant dating back to 1913. Then it rained, which is said to be very rare during the winter months in India.

That evening, we were jostling with crowds at the bazaar in Chandni Chowk, the heart of Delhi’s most popular marketplace.

Meandering through a maze of colorful food stalls and small shops that sell everything from wedding dresses to peacock feathers, we couldn’t help but enjoy the delightfully crazy atmosphere of noise, aromas and heaving humanity.

I dare say that if you pointed a camera at one spot for just a minute, none of the pictures you took would come out the same. 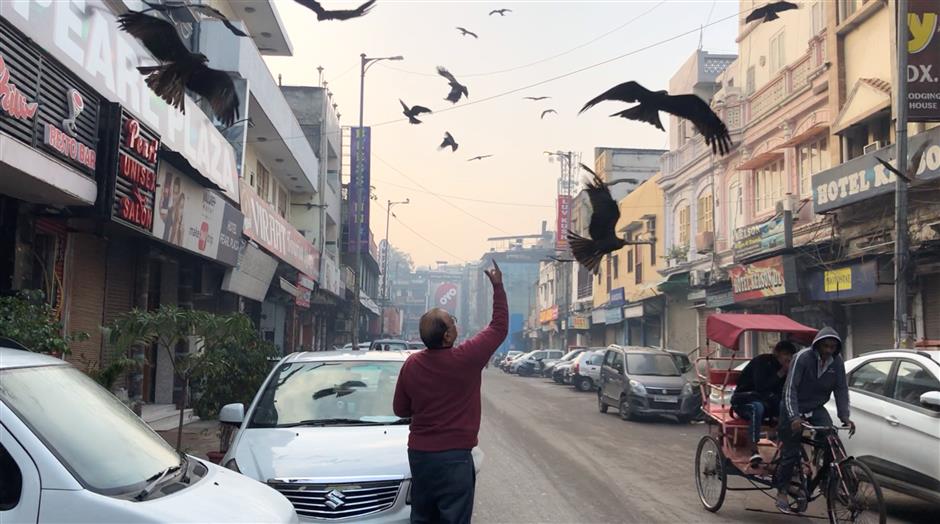 Mr Om feeds birds early in the morning in his neighborhood. 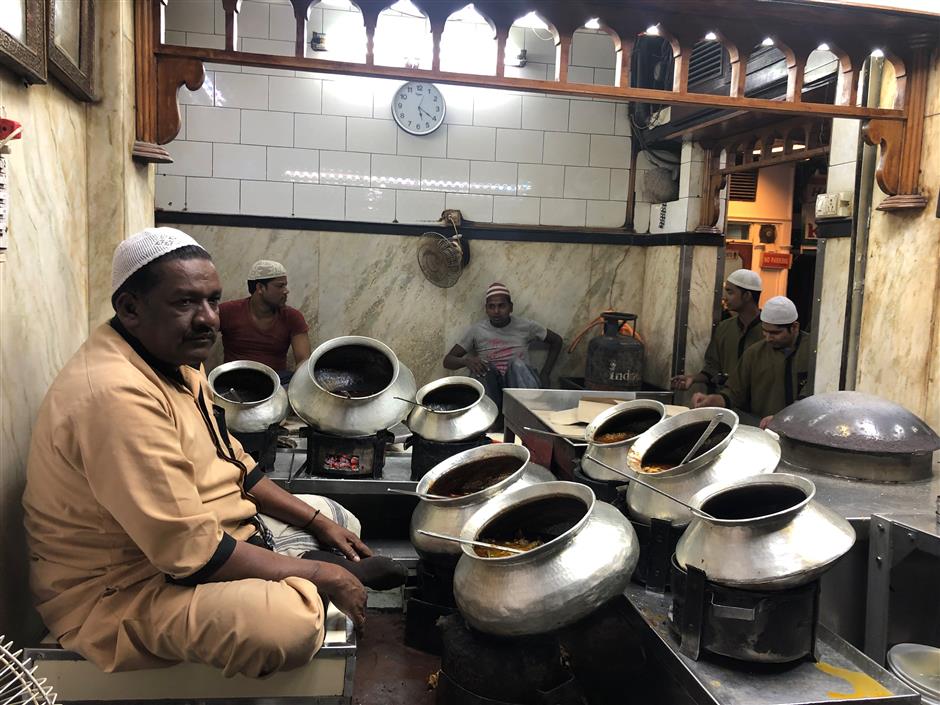 The take-out counter at the popular Karim's Restaurant

The ideal months are September-October and February-April, to avoid the city’s extreme weather and annual monsoon season.

If you go in March, you will be able to witness Holi, the festival of colors. Its dates change according to the lunar calendar.

By April, the streets are abloom with Gulmohars and Amaltaas trees.

The most important Hindu festival, Diwali, usually falls in October or November. Though beautiful to observe this festival of lights, be aware that pollution levels skyrocket from the burning of firecrackers. 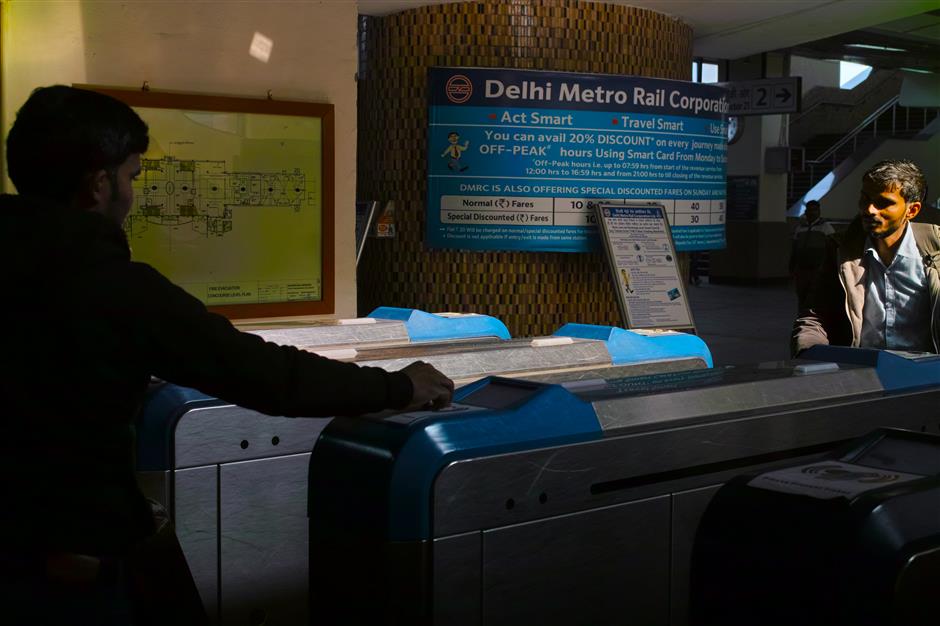 New Delhi's Metro lines are a cheap and efficient way to get around the city and beat the road traffic.

How to get about:

Times have changed, and wary travelers no longer need to muster up the courage to haggle with rickshaw or taxi drivers out to make a quick buck off tourists. Now one can book an Uber or Ola at reasonable and pre-determinable prices. Download the apps, book a ride and pay with cash at the end of the journey. Or be brave and hop onto the very efficient Metro system, which can be very crowded.

The HOHO Bus (hop on, hop off) is a good option to cover the important sights of the city in a short time. Make your way over to the HOHO center at Connaught Place, which is the preferred starting point, or board at any of the pickup points closest to your location. One-day and two-day passes are available for between 100-130 yuan (US$14-19). The two-day pass is by far the more economical.

The advice is provided by Parul Rewal, who is an architect and urban professional from New Delhi.