Artist colony finds inspiration in town off the beaten track

People visiting Hangzhou, capital of Zhejiang Province, sometimes take a side trip to Tonglu, a county to the west of downtown, to visit nearby limestone caves. But few venture even deeper into the county’s mountainous areas, missing a grand opportunity.

About half an hour’s drive from Tonglu Railway Station, a stop along the new Hangzhou-Huangshan high-speed railway, is a large sign announcing that you have arrived at the Jiangnan ancient village cluster.

Beyond the sign sit five villages that have nestled against the mountains for hundreds of years, even 1,000 years. Each has its own charm.

Dipu Village sports a vast sea of flowers covering an area the size of 25 soccer fields. Huanxi retains ancient buildings constructed during the Ming and Qing dynasties (1368-1911). Qingyuan and Xufan are picture postcards of rural tranquility, with green agricultural fields and sparkling waterways.

My destination is Shen’ao, a village with a history dating back nearly 1,000 years that has become a magnet for artists in contemporary times. 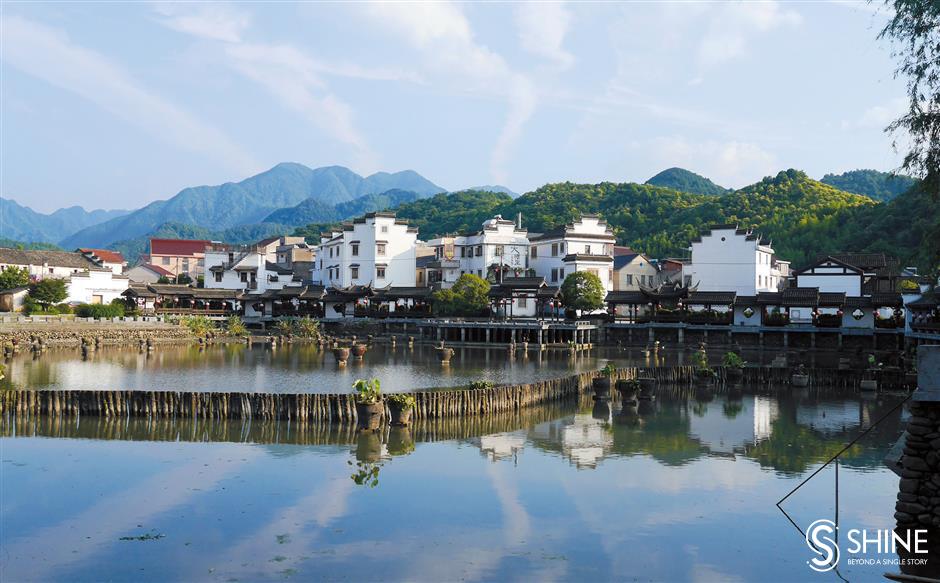 Shen’ao Village is a quiet haven with stunning mountain and water scenery, and a kind, welcoming population.

I read up on the history of the village. Its name comes from an elaborate water drainage system built during the town’s origins. In the local accent, ao means “water outfall.” The village has a complete system of underground culverts, ditches, wells, ponds and creeks, which provide flood control and clean water for residents.

It is a wonder that such an advanced system could have been designed 1,000 years ago.

The entrance of the village, however, feels anything but ancient. Rather, it harks back to the 1960s and 70s.

A grand, white hall is located beside the entrance to the village, with a pentagram and three slogans: “Long live the great Chairman Mao,” “Sailing on the sea is guided by the helmsman,” and “The revolution is led by Mao Zedong Thought.” 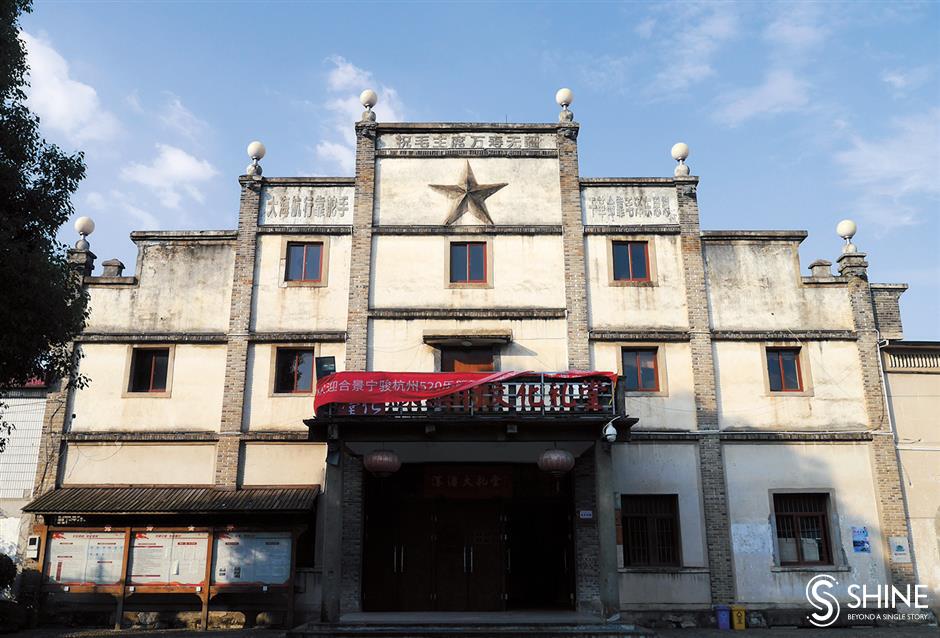 Villagers seem happy to keep the hall, which today serves as a theater and conference room, as it is.

Walking further into the village reveals the more ancient side of Shen’ao. White houses with black trim flank narrow, flagstone roads. The architecture is typical Hui-style, a traditional style that prevailed in ancient Huizhou, which is now part of Anhui Province, and surrounding regions.

During the late Southern Song Dynasty (1127-1279), a clan with the compound surname Shentu settled here, and today the old houses are still home to their descendants. A hall enshrining memorial tablets of Shentu ancestors is still worshipped by the villagers.

For hundreds of years, the village was undisturbed by the outside world. Perhaps the only ripple of history occurred when Kuomintang general Dai Li (1897-1946) set up a spy training school in the village.

The schoolhouse, which served also as a rendezvous for Dai and his mistress, has been preserved. Even its conversion into a small museum in memory of the general didn’t fundamentally change the look of the site.

With such abundant beauty and tranquility, it’s small wonder that artists and craftsmen from around China began descending on Shen’ao several years ago. They set up studios to pursue different artistic disciplines, drawing inspiration from their surroundings. 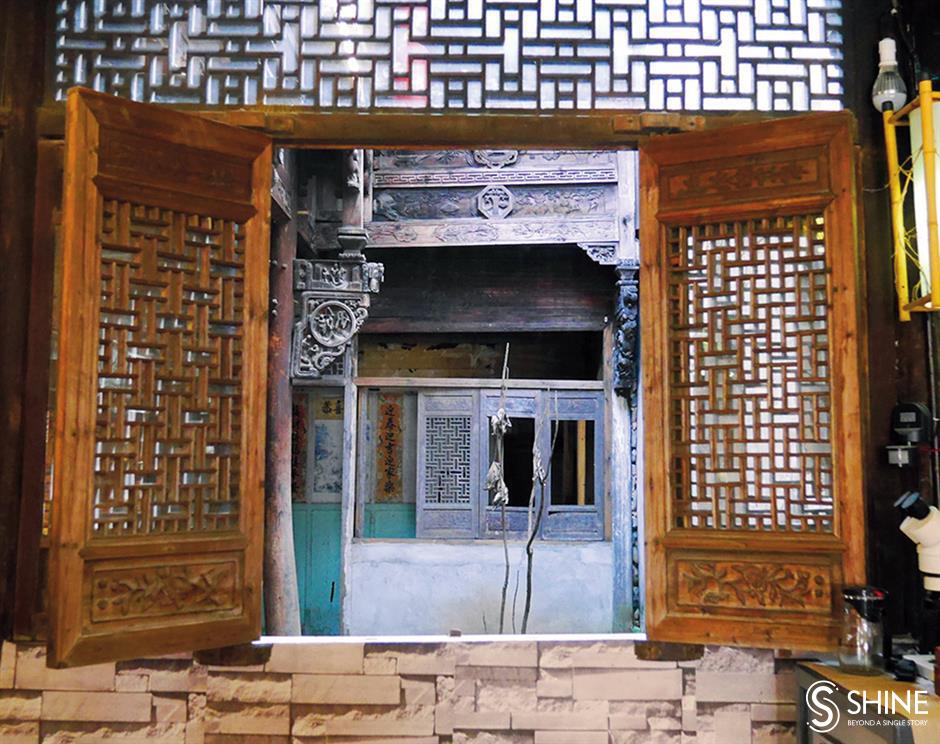 Artists set up their studios in hundred-year-old houses.

Dou Zhaoyao, a costume designer for Chinese opera, has been living in the village for more than two years. He moved from downtown Hangzhou, rented a house from a local family and modified it into his home studio. It contains a mini-bar, several guest rooms and a pleasant yard where flowers and a Japanese cherry tree grow.

Evenings, artists and craftsmen gather over drinks. The group include a handmade jewelry designer, a pyrographer who decorates calabashes with burn marks, a flavorist who experiments with flavors, a cloth shoemaker, and occasional homestay guests with artistic interests.

“Most of us have signed long-term rental contract with the house owners,” Dou tells me. “Here the air and water are clean, people are kind, mostly, and the houses are so very beautiful.”

In the village, he says he found the life that he never realized he was searching for. He has friends, a business he loves, and a cat and dog. His latest order came from a nearby temple that wanted 60 gowns for Zen meditation pupils.

Wu Yunting, the pyrographer, works in her studio in the village, with plans for the future.

“I would like to have a small classroom for visitors so they can learn and do their own calabash art, a small snack bar and several rooms for overnight stays,” she tells me. “I want people to find a rich experience here.”

The artists give the village a soupçon of commercialism, but it doesn’t intrude to the same degree as in many made-over ancient towns and villages around China. The artists here don’t sell tacky souvenirs or put barbeque grills in the middle of the street. What they do is sharing their creativity unobtrusively with visitors, while retaining the lifestyle they came here to enjoy.

A cozy, casual atmosphere prevails. Village residents often leave their doors open so that visitors can take a peek inside very old houses with exquisite wood carvings on beams, pillars, windows and doors. 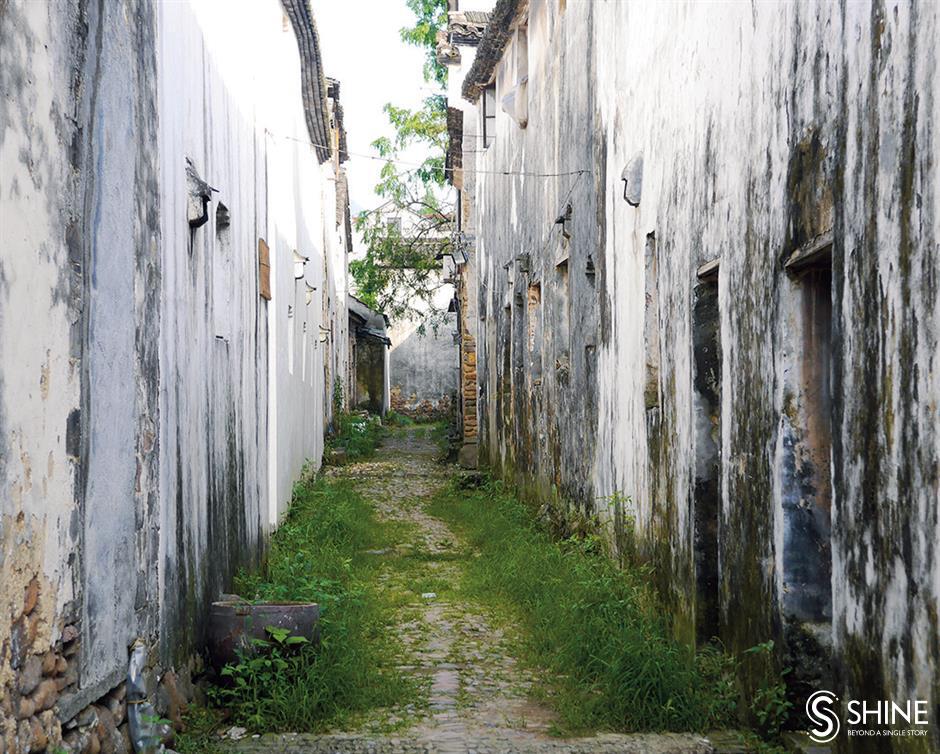 Most of the village retains its ancient look.

I feel a bit hungry after walking around under the scorching sun all day. The only eatery still open is a snack stall at the entrance of the village. Operated by a middle-aged woman, the stall serves local specialties like deep-fried stinky tofu, scones with sweet fermented-rice and jelly made from the seeds of the manglietia tree.

“Try the jelly. It is best for relieving the heat,” the woman suggests to me.

She removes a quilt over a cooker and scoops out a bowl of iced jelly, dressing it with a dark-colored sauce. It tastes both a little sweet and a little sour. The jelly is so smooth and soft that it melts in my mouth. Indeed, the light, cool taste revives me almost immediately.

“Every year, we pick manglietia seeds from the back mountains in autumn, dry them and keep them in stock for the next year,” the woman explains. “Then we grind the seeds and make it into jelly.”

“It’s just a syrup made from brown sugar, rock sugar and a tiny bit of vinegar,” she says. “Just a little sourness does the trick.” 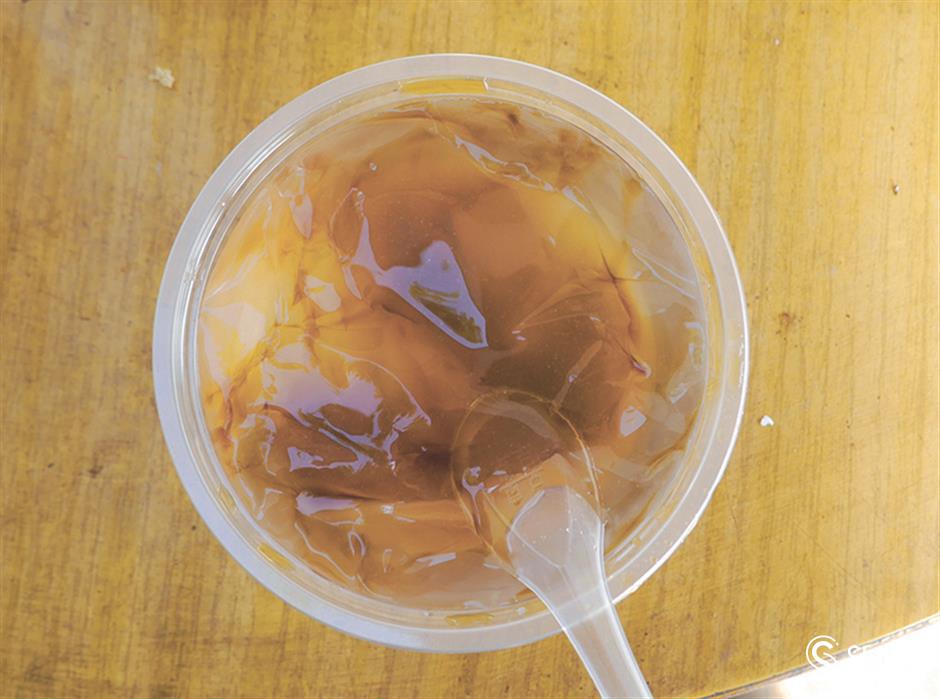 I’m not a fan of stinky tofu, which is a favorite of many people living in the Yangtze River Delta region, including Shanghai. But here, the tofu doesn’t smell too “stinky,” so I decide to give it a try.

The tofu is crispy on the outside and soft and juicy on the inside. Despite the smell, it doesn’t taste weird at all. Instead, the savory flavor goes well with a sweet bean sauce.

The woman says locals particularly love stinky tofu sandwiches, which are made by wrapping deep-fried stinky tofu in two slices of fried scones with sweet fermented-rice.

I would never have thought of this way of eating stinky tofu, but it is actually tasty. The scones are very crispy, with a hint of sweetness, and the tofu is juicy so it doesn’t leave a dry feeling in the mouth.

While I am munching on the sandwich, some villagers come to the stall for snacks. They seem so happy chewing and drinking. I think this probably is their comfort food.

Due to movements of the earth’s crust and volcanic eruptions, karst caves have been formed in the mountains around Tonglu.

Yaolin Fairyland and Chuiyun Tongtian River are said to be the two most beautiful caves in the area.

Yaolin Fairyland, or Yaolin Cave, stretches for 1 kilometer. Visitors can walk along a passageway to gaze at limestones in thousands of shapes — some resembling a waterfall, some a group of lions, and some mythical figures. With colorful illumination, the cave is worthy of its name.

Chuiyun Tongtian River is an underground river that runs for 4.5 kilometers in a limestone cave. Visitors need to take wooden boats to navigate through the cave. Apart from viewing limestone formations, visitors also experience a mildly thrilling, drifting journey.

It takes about two hours from Shanghai to Tonglu by high-speed train. The downtown of Tonglu is quite small. Visitors can take taxis to view surrounding scenic areas and villages. Accommodation in downtown Tonglu is available if village guesthouses are solidly booked.

Special Reports
ADVERTISEMENT
61906
,
For a spring break, take a stroll in our beautiful backyard
Been there, done that? Not at these quirky sites
B&Bs in rural areas add artistic flourish to farmland holidays
Xiangshan awakens with arrival of spring
Hangzhou abounds with festival activities
A step back in time in any language in Songjiang
Fudan University founder's home is renewed
Mount Chaoshan celebrates plum blossoms with cultural activities
All aboard for a culinary excursion that will tantalize the taste buds
An excursion that gives us something to think about
EXPLORE SHINE