A day in the life of Changning

Changning District in Shanghai’s west downtown is known for its international atmosphere and historical ambiance.

About 70,000 foreigners live in central Changning, some 30 percent of the city’s total foreign population.

Changning aims to become an international quality district with innovation, fashion, vitality and a green and comfortable environment. The proportion of green space and the quality of the environment rank among the highest in the city.

The district also features a history dating back to the Tang Dynasty (618-907) when the district served as the Gaochang Village of Huating County, the origin of the city.

Though most of the ancient relics have vanished during rapid urban development, many exquisite historical buildings, including the former homes of celebrities in the modern era, have been well preserved.

A one-day trip across Changning can reveal the history of contemporary Shanghai as visitors enjoy its historical streets and garden villas as well as its international flavor and art ambiance.

It runs through the districts of Changning and Jing’an. In recent decades, it has been shortened to its current length of 800 meters.

The city government lists the road as one of the 64 historical streets that cannot be widened to preserve the feel of the neighborhood. The road is one of the 12 protected historical and cultural zones in the downtown area.

It features well-preserved historical villas once home to big names such as missile and space scientist Qian Xuesen (1911-2009); writer, translator and scholar Shi Zhecun (1905-2003); and New Zealand-born writer Rewi Alley (1897-1987), who came to Shanghai in 1927 and was later involved in China’s revolution and reconstruction.

Tourists can experience the latest urban renewal project on the road that perfectly blends history and art, tradition and modernity.

A derelict house near the entrance of Hongye Garden has become Yuyuan Public Market. It is an ordinary local market where residents can buy traditional Shanghai breakfast foods such as youtiao (fried dough stick), dabing (flatbread) and soybean milk. It has the standard array of shoe repairers, and you can get new keys cut or broken umbrellas fixed.

Upstairs Su Shanghai, a community art museum, was created in tandem with the Liu Haisu Art Museum. It is a place where people can enjoy free exhibitions, read books or relax with neighbors.

Tourists can also check the rehabilitating projects on rundown housing on the nearby Xinhua Road, where young architects and residents are working together to renew the old downtown communities.

The 1.5 kilometers of Xinhua Road between Huaihai Road W. and Yan’an Road W., built in 1925, also features a dozen heritage villas and former homes of dignitaries, such as American missionary Gilbert Reid.

Visitors can also follow a route recommended by the district government to learn about the liberation of the city in 1949.

The route includes the former Shanghai Bureau of the CPC Central Committee at 389 Jiangsu Road and the Jiaoyi Building of East China University of Political Science and Law, which served as the first base of the People’s Liberation Army after it entered Shanghai in May 1949. 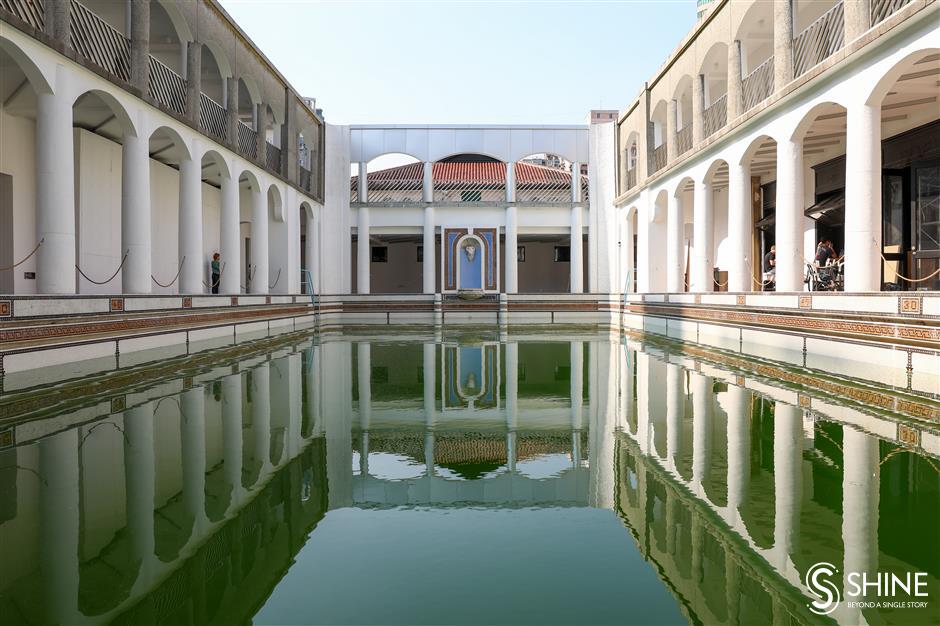 A visit to the Columbia Circle compound is recommended.

It is among a few local sites that comprise both exquisite historical structures and remnants of earlier scientific research. The compound, tucked away on the site of a former biological institute, has been renovated as a hub for fashion and leisure arts.

The site, owned by the Shanghai Institute of Biological Products on Yan’an Road W. near Panyu Road, has been converted into a complex with offices and shopping.

From 1927 to 1942, the country club was a gathering place for Americans. After World War II broke out in the Pacific, the site was taken over by the Japanese who used it as a transit camp for Allied nationals remaining in Shanghai.

The building reflects Spanish architecture, with teak floors, stone fireplaces, stone columns and a spiral staircase restored to their original look. The wooden beams on the second floor have been left exposed to show their delicate structure. Several large French windows lead out onto a balcony where visitors can view the whole compound.

The renowned Hungarian architect Laszlo Hudec was appointed to design the project. He drew on Spanish architecture because that was in vogue in the United States at the time. He built a garden villa for himself next to the club. 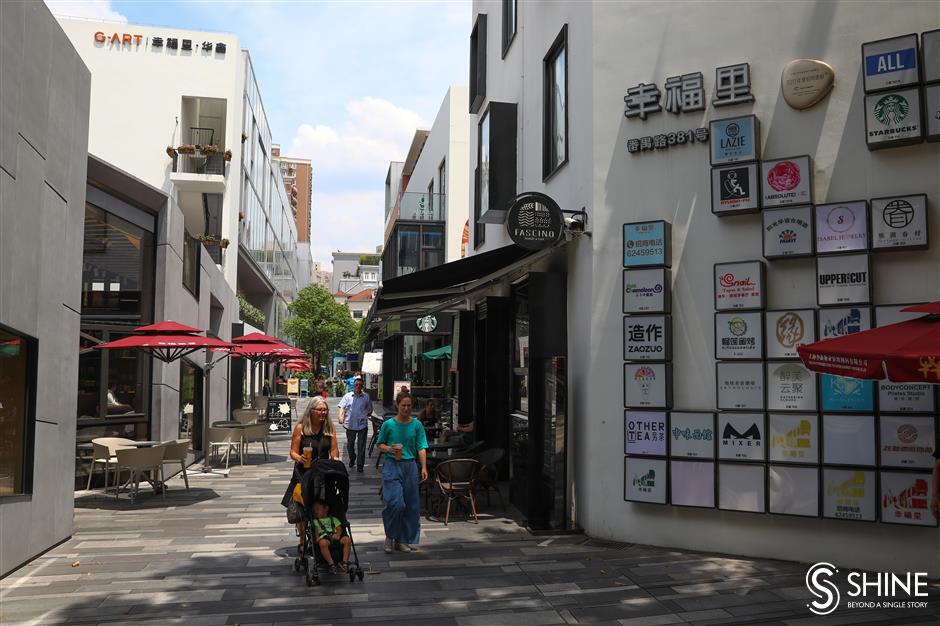 Xing Fu Li, or Happiness Lane, a creative park developed from a former rubber factory, is another example of how to turn the old into new while preserving the past.

It is now home to various fashion stores, restaurants and design studios.

Residents in the neighborhood once had to make a detour to cross the former industrial site, but they can now enjoy a relaxing and pleasant landmark. The park attracts photographers taking photos amidst its former industrial and artistic ambiance.

After a day’s tour, tourists can enter Zhongshan Park and other street greenbelt areas to listen to piano music or other performances by artists from home and abroad during the ongoing Shanghai International Arts Festival and its Art Space section. The festival also features master workshops and lectures.