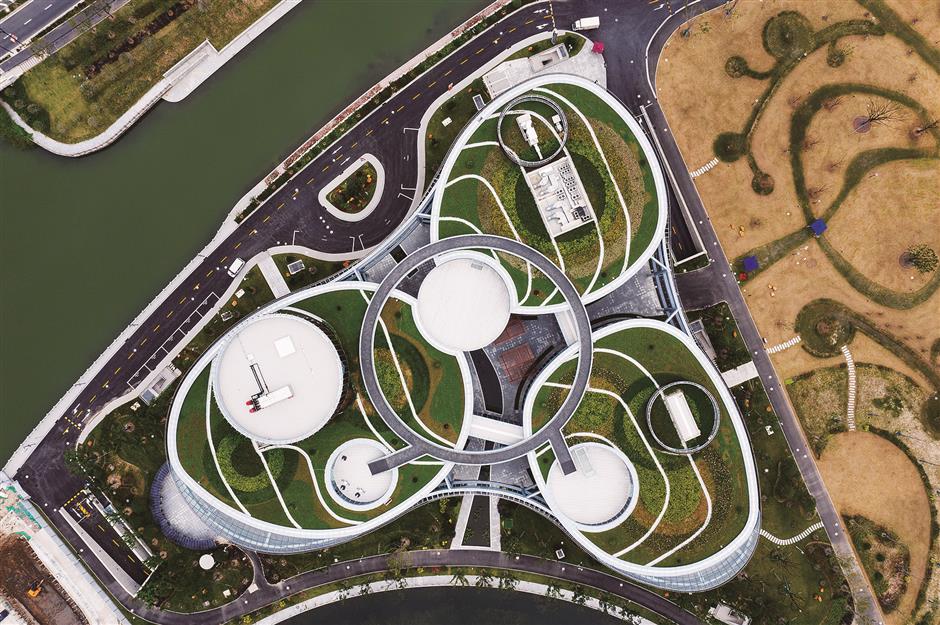 A bird’s-eye view of Fengxian Museum near the artificial Jinhai Lake in Nanqiao Town.

Fengxian District’s name literally means “to respect the nobility” as early residents offered help to Yan Yan, an apprentice of Confucius, during the Spring and Autumn Period (770-476 BC).

The district on the city’s southernmost outskirts now aims to become the central hub for the world’s cosmetics and health industries, while preserving its authentic agricultural and rural lifestyle.

A one-day trip to Fengxian can start from a historic floodwall which is being developed into a heritage park, along with a number of other nearby historical and cultural sites.

Application has been tendered for the 4 kilometers that are left of the Huating Ancient Stone Dyke, dubbed the “Great Wall on the Sea,” to be listed as a national cultural heritage site.

The dyke, in the district’s Zhelin Town, originally stretched 33 kilometers along Hangzhou Bay. The bulk of the structure was built in 1713 to stave off both floodwaters and pirates.

The surviving section was unearthed in 1996. Built with four layers of stone bricks, it is about a meter high and follows the outline of the coastline to resist flooding more effectively.

People began building floodwalls along the coastline in the Sui Dynasty (AD 581-618). Local people originally used clay for these walls, but then switched to more durable stone.

Dyke building technology was further improved in the Ming Dynasty (1368-1644), when the stone wall was also used to resist Japanese pirates.

The most solid section of the dyke was built in the Qing Dynasty (1644-1911) with granite bricks. Part of this section remains in Zhelin today.

The dyke was later buried and its history forgotten. It was listed as a city-level cultural heritage site in 2002.

Visitors can see other nearby historical sites that are to form a cluster of cultural relics in the southern outskirts. These include East Sea Guanyin Temple, dating back to the early Ming Dynasty, and Wanfoge Temple.

The Eryan Temple, built during the Yuan Dynasty (1271-1368), has endured the vicissitudes of 800-plus years. Its oldest pavilion was destroyed during the “cultural revolution” (1966-76), and urban development caused what was left of the temple to be moved to its current location in 1993.

It is still the grandest Buddhist temple in Fengxian. Every year, more than 100,000 people visit to pray and to admire two nearly 1,000-year-old ginkgo trees in the yard.

The trees, which resemble two people standing side by side, are the biggest treasures of the temple. A fence surrounds them, providing a place for people to tie on red strips making wishes, mostly about love and marriage.

The best season to visit the temple is late autumn, when the ginkgo leaves turn golden and fall like rain in a breeze, coating the ground with a shimmering blanket. With Buddhist chants in the background, the scene has a sacred, surreal feel.

One highlight, the Nine Trees Future Art Center in Nanqiao Town, has just opened to the public. The center is known as China’s first forest theater because it is surrounded by an 800,000-square-meter forest that is home to a number of wild bird species, mainly egrets.

One of its leaves wraps around the main 1,200-seat theater, while the other leaf covers 500-seat and 300-seat theaters. The indoor theaters feature state-of-the-art holographic sound systems.

Audiences can also sit on the lawn in the outdoor forest theater, or be surrounded by flowing water near the water stage.

Fengxian Urban Museum, which includes the district’s urban planning exhibition hall, showcases both the history and future of the district, as well as being an important public venue for residents.

Another new cultural landmark is the Fengxian Museum which opened to the public in May.

The museum is near the artificial Jinhai Lake in Nanqiao Town.

Designed by Japanese architect Sou Fujimoto, it features permanent exhibitions on the urban planning and history of Fengxian. 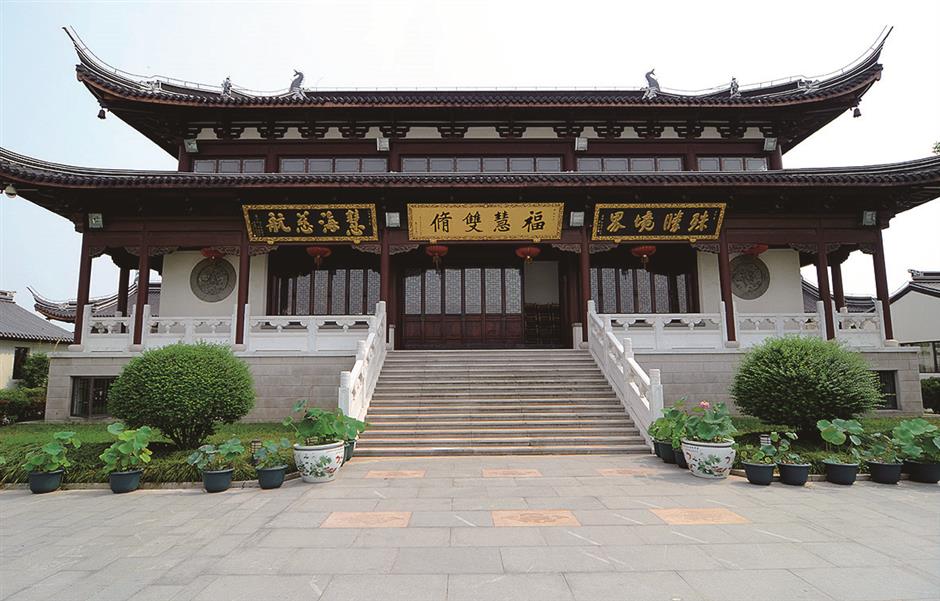 Another exhibition depicts the history of its seawall. The floodwall has contributed a lot to the social and economic development of the city and part of the stone wall is well preserved.

After visiting the museum, tourists can walk around the Jinhai Lake — also known as Shanghai Fish Lake. One of the city’s largest artificial lake, it covers an area roughly the size of 800 football pitches.

The district is also developing into an “Oriental Beauty Valley” that will promote local cosmetic brands globally and help turn the city into Asia’s largest “beauty and health” industry center.

The valley aims to be on par with France’s Cosmetic Valley in Ile-de-France and Japan’s Saito Life Science Park in northern Osaka.

The valley, the first of its kind in Shanghai, includes a 20-square-kilometer central industrial park to serve the headquarters of domestic and international companies.

They generate over 40 percent of the total output value of the city’s cosmetics industry and include well-known global brands such as Nu Skin from the US and South Korea’s Cosmax as well as local brands Pechoin and Jala.

To experience the city’s authentic rural lifestyle, Wufang Village in Qingcun Town, the city’s major production center for the famous yellow peach, is the best choice.

The Qing Dynasty (1644-1911) village has been renovated to become a tourist attraction while improving the quality of its farm produce.

Wufang dates back around 300 years. Its old houses have been restored, waterways dredged and the environment improved as part of the city’s “rural revitalization” program. It has been listed as one of the first batch of nine demonstration villages to be revitalized.

The village was initially developed by the order of Emperor Daoguang in the Qing Dynasty to reward a local Wu family for their filial piety. A stone gateway was once erected at the entrance for people to pay their tribute when entering the village.

Villagers have been encouraged to rent their spare houses to the government and the buildings are being converted into homestay projects and offices for startups. Over 60 households have signed leases with the government, which will take charge of repairs and redecoration.

Some abandoned artifacts such as milestones and plows have been collected to decorate some houses that have become homestays or small eateries. The former ponds to raise fish and crabs have been unified for tourists to enjoy fishing contests.

A century-old residential house is now a museum telling the history of the village.

Meanwhile, in cooperation with the Shanghai Academy of Agricultural Sciences, the yellow peach orchards in the village have been upgraded. Some 30-year-old peach trees have been replaced with better species while the soil has also been improved.

Tourists can taste the bigger and sweeter yellow peaches in summer as well as the famous honey pear in autumn.

﻿
Special Reports
﻿
61840
,
Three villas: a tale of wartime skullduggery
Writers and artists of the past lend old lane a rich history
First bloom signals late start to osmanthus season
Time well spent: The revitalization of a Bund icon
Our prehistoric predecessors: They fascinate us, they scare us
'Red' tourism and culture travel activities abound in Jinhua Week
Near neighbors: The rich history and close residents of Ci'anli Building
Ningbo is becoming a new summer hotspot for tourism
Hangzhou's most popular 'red' tourism sites
Timber temple evokes debate over origins of its architectural style
EXPLORE SHINE